It’s never to early to start talking about the Tour de France.

The 2008 Tour de France route was announced a few weeks ago. There are only two giant multi-climb Alps mountain stages- (there are more in the Pyrenées and a couple of medium days in the Alps). One of the two giant Alps stages – stage 17 – includes the usual suspects climbing Col du Galibier via Col de Lataret, onto Col de la Croix de Fer and finishing atop Alpe d’Huez. An Epic but well known route. Click here for a preview of Stage 17.

But the other giant Alpine stage – stage 16 – will involve two fantastic but lessor known climbs. The Col de la Bonette – the highest paved road in Europe (ok its debatable) – and the impressive Col de la Lombarde. So here’s a brief overview of the the two climbs.

Stage 16 – Starts in Cuneo, Italy. 157 kms (just under 100 miles). Ends in Jausiere, France.
This will only be the 4th time that Bonette appears in the tour de France. Bonette first appeared in the Tour in 1962 and 1964, both times The Eagle of Toledo, Frederico Bahamontès, was the first over the Col – The Eagle was a six time winner of the Best climber Award in the Tour. In 1993 Britain Robert Millar was first over the top.

Col de la Lombarde – About a third of the way through the stage, the riders will approach Col de la Lombarde – at 2,350 metres, (almost 8,000 feet), one of the highest roads in France. From the South, at 37 kms in length, this is one of the longest climbs in France, but rarely too steep. But the Tour will climb the shorter but steeper North side, starting in Vinadio Italy. Still it is 22 kms with several very steep stretches especially near the beginning. I have never climbed Lombarde, but it is of course now on my list for 2008.

The Col itself is actually only at 2,715 metres, but a little loop road goes up and around the peak to 2,802 metres (called the Cime de la Bonette – Cime means top) apparently for the sole purpose of making the road higher (see photo below) than the Col de l’Iseran.

Click here for details on the North route up Bonette

The Road signs proudly proclaim Col de la Bonette as the highest route in Europe, but it’s a contentious claim. There are certainly lots of unpaved roads higher. But Bonette is a perfectly surfaced paved route.

Two Austrian paved roads seem to be slightly higher: Söldener Gletscherstraße at 2,803 metres and the nearby Ötztaler GletscherstraBe at 2,823 metres in a tunnel. Still Bonette is pretty impressive. 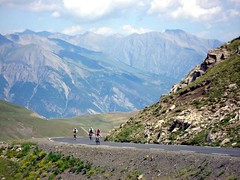 The scenery here is incredible. There is virtually nothing nearby except mountains. Much of the climb goes through the French National Park of Mercantour.

The pass itself is actually only at 2,715 metres and passes by the Col de Restefond at 2,680 metres where the remains of an old Army barracks remain.

But something funny happens at the top. The road does a quick loop around a mountain – the Cime de la Bonette (Cime means Top or height in french). This little loop raises the road to 2,802 metres and appears to be built for no other reason than to be higher than famous french roads like the Col de l’Iseran (2,770 metres). Click photo to see loop. 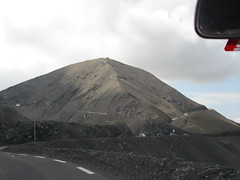 For stage 16, the riders will pass over the Col and then face a 23km descent down to the finish in Jausiers. It is a VERY fast descent and will be exciting if the stage is still contested.

I’d love to hear any stories from anyone that has climbed either of these great climbs. For me, this is the stage that I am looking forward to the most.

If you are planning on visiting the area to see the Tour de France, Barcelonnette ( a few kilometres from Jausiers) is a great place for cyclists to stay. The town is surrounded by 8 incredible climbs including a few of my favourites such as Bonette, Col d’Allos, and Col de la Cayolle. As well as Pra Loup, Col de Vars, Col de Larche and others.