Part of my 2011 Challenge was to ride above 3000 metres by bike for the first time. Injury delayed this goal, but I hadn’t forgotten. 🙂

Orelle is in the Maurienne valley not far from the start of Col du Télégraphe and Galibier. It is home to the longest Télécabine in the world that links the village to the Trois Vallées Ski Domain via Val Thorens.

At 2802 metres, Cime de la Bonette was the highest I had ever been on a bike. With the exception of Pico de Veleta in southern Spain, getting above 2800 metres or so means unpaved roads or trails – so I had my hybrid with me.

21 kilometres and 2120 metres of climbing. Wow. The climb starts at the beginning of the above mentioned télécabine. I was surprised to find that only the first four kilometres were paved. After that it is what I would call a good quality gravel road …. at least until it degenerates into a ski slope near the summit.

Once the gravel road starts the hairpins are signed and numbered. The sign guy lost motivation at about 19 hairpins as the route reaches the Crêt d’Arcelin at roughly 2000 metres – I guess he wasn’t a cyclist. As usual with a huge climb, it just gets better as one gets higher – and here was where this climb started getting “great.”

Update: For more climbs above 3000 metres see here. And see here for details of a later ride to this same summit from the far side.

Photo from above of Crêt d’Arcelin and a little perched chapel in centre: 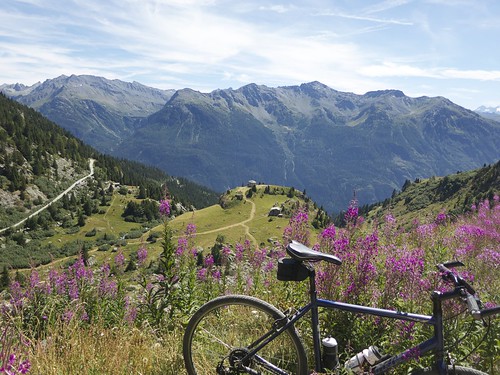 The route roughly follows the line of the télécabine, passing under it now and then. From Arcelin the road rises above the tree line and gets very steep. I was able avoid pushing the bike for most of the way to Plan Bouchet (2344 metres) where the télécabine ends.

Below Plan Bouchet it gets steep:

After Plan Bouchet was brutally tough but incredibly fun. Roughly 4 kms, on very rocky, slippery path / ski piste at occasionally impossible steepness. We’ve skied this slope several times. From Val Thorens …. on the other side of the summit …. this is often the sunniest piste early in the morning during the shorter days of January.

Often too difficult for me to ride: 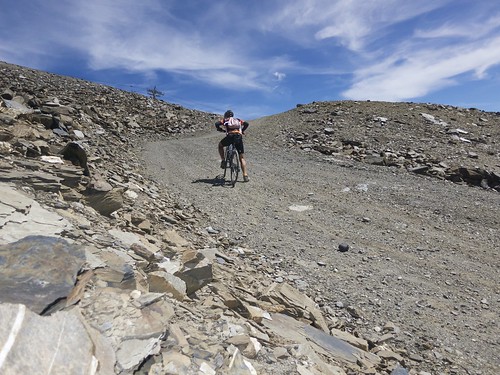 I must admit I pushed a lot. But I jumped back on the bike at every opportunity. 12% seemed like false flat luxury. Slowly, but steadily I made progress towards the always visible ski lift cabin at the top.
The road summits at Col de Rosael – signed as 3000 metres but actually 2977m. It’s just next to – but not over – Col de Caron (2996 metres). Passing through to the Val Thorens side the road goes up to the top of another télécabine at 3003 metres. WOOOOHOOOO!

I explored briefly the ridge passing over Col de la Montée du Fond (2974 metres) (loosely translated, perhaps: Pass of the Climb to the Far End). I relaxed on the ridge taking in all the views in every direction. I was deliriously pleased.

The highest I have ever been on a bike. Too good.