OK, I cycle (slowly) a lot of climbs. But let me go out on a limb and say this is my absolute favourite climb – especially the south side.

How I got addicted to cycling uphill
I am occasionally asked why I started cycling uphill. My “epiphany” came one winter skiing in Val d’Isere.
I kept staring at this beautiful little road surrounded by high alps and mentioned that it would be a nice place to bicycle.

That road below – except under lots of snow. 😉 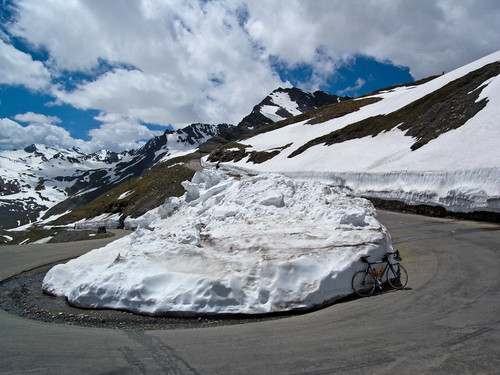 Only later did I learn that it was the highest paved pass in France @ 2770 metres – the legendary Col de l’Iseran.

After the ski trip, I had to wait 6 months until the snow was cleared, but I was so enchanted that I climbed it the day before it was open to cars. Addiction begins.

Today was the second time to climb the south side.

From Lanslebourg it’s 32 kms to the top, but after the short but steep Col de la Madeleine (no, not the famous Madeleine), the first 18 kms are generally flat and peaceful.

Then the road turns up. June is a great time to climb – it just opened – and there is plenty of snow around.

The south side is more remote and steeper than the Val d’Isere side. The route just climbs through the mountains. And it’s just a beautiful ride. I smiled a lot today: 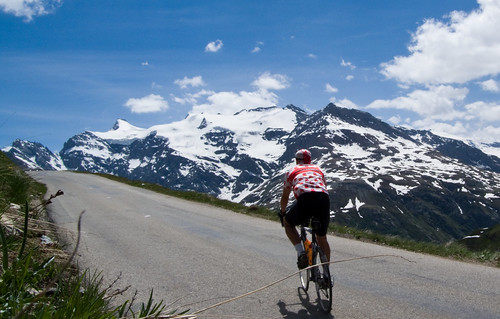 Despite a heat wave down low, I was glad that I brought a couple of jackets for the descent. Obligatory, even in July/August.