The goal today was to see if I could get to Col du Galibier from the Maurienne valley without taking Col du Télégraphe – not easy. The second part of the adventure was the final stretch trying to reach Galibier – which was officially closed above the tunnel. But I am getting ahead of myself.

I took a lot of photos, so I’ll try and let them speak instead of droning on too much.

I started in Villargondran, near St-Jean-de-Maurienne (see detailed map at very bottom), in sight of the start of the climb to Col du Mollard. From here, just follow the signs to Albanne and Karellis. Similar to Télégraphe, it’s a big purpose-built road to a ski station, but it’s a harder, and quieter climb – starting a little lower and finishing a 100 metres higher than Télégraphe. Lots of great views. The road splits a few kilometres from the Col. I skipped the visit to Karellis – see here for details to Karellis – and headed straight to Albanne.

Col d’Albanne is a very nice big climb in its own right . 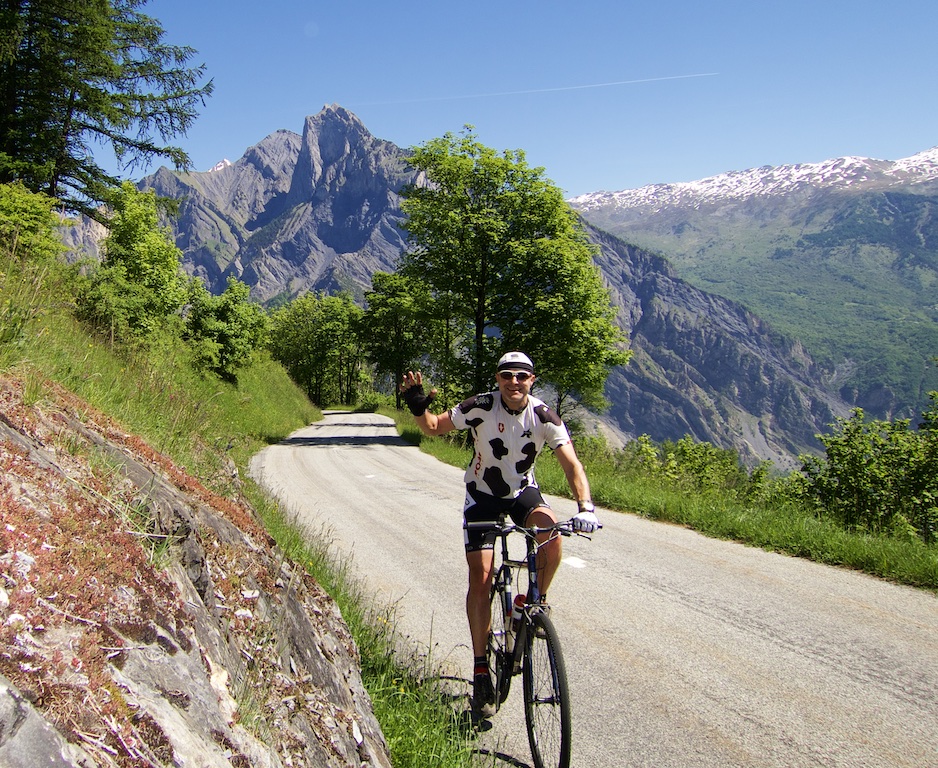 Just over the Col, in the village of Albanne one looks out over a gigantic gorge and has a clear view of Col du Télégraphe and the standard road to Valloire.

Next comes the tricky part. Pass through the little village and there is a road that heads into the woods and hairpins down towards the gorge. Just before Albanette, is a hiking trail-head to Valloire. But soon the path becomes a vertiginous, super rocky cliff road. I suppose at one time, brave locals may have taken a vehicle here. But they are forbidden now, and the avalanche warning signs seem quite believable. 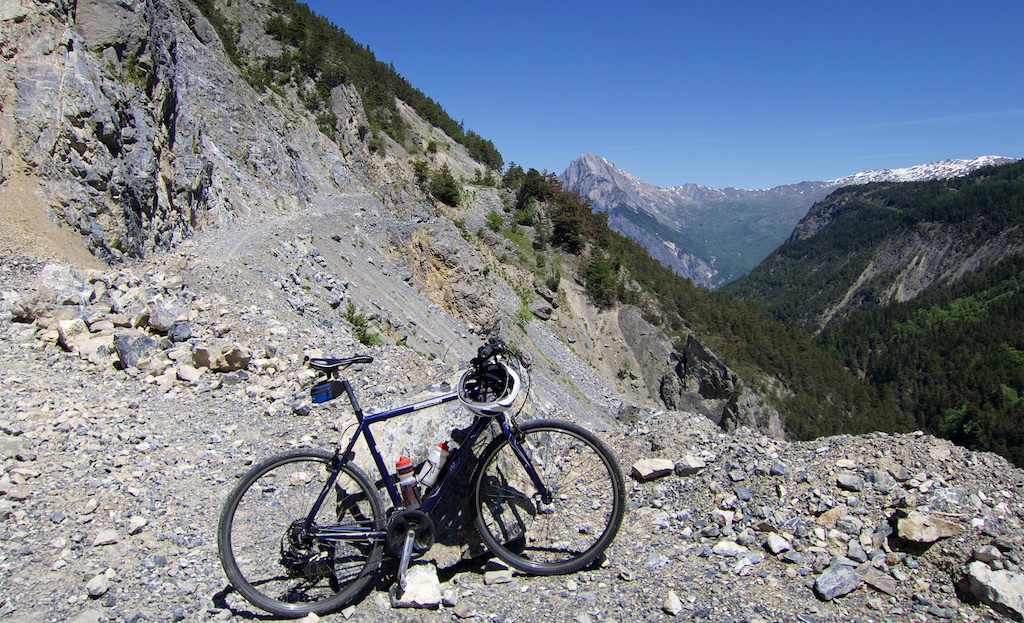 View of cliff “road” from opposite side (near Télégraphe): 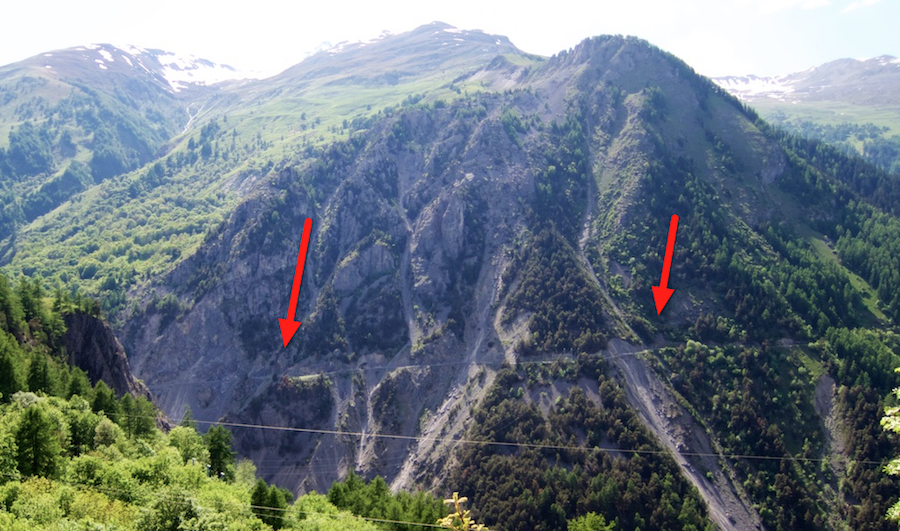 The unpaved stretch is actually not much more than 2 kilometres, and I soon exited to a road just below Valloire. Excellent. I joined the road to Galibier at the low point of the second part of the climb in the profile at left. I slowly headed higher.

Perfect weather, I was looking forward to reaching the snow, but became slightly nervous when I saw the Galibier tunnel was open, but the Col above closed. 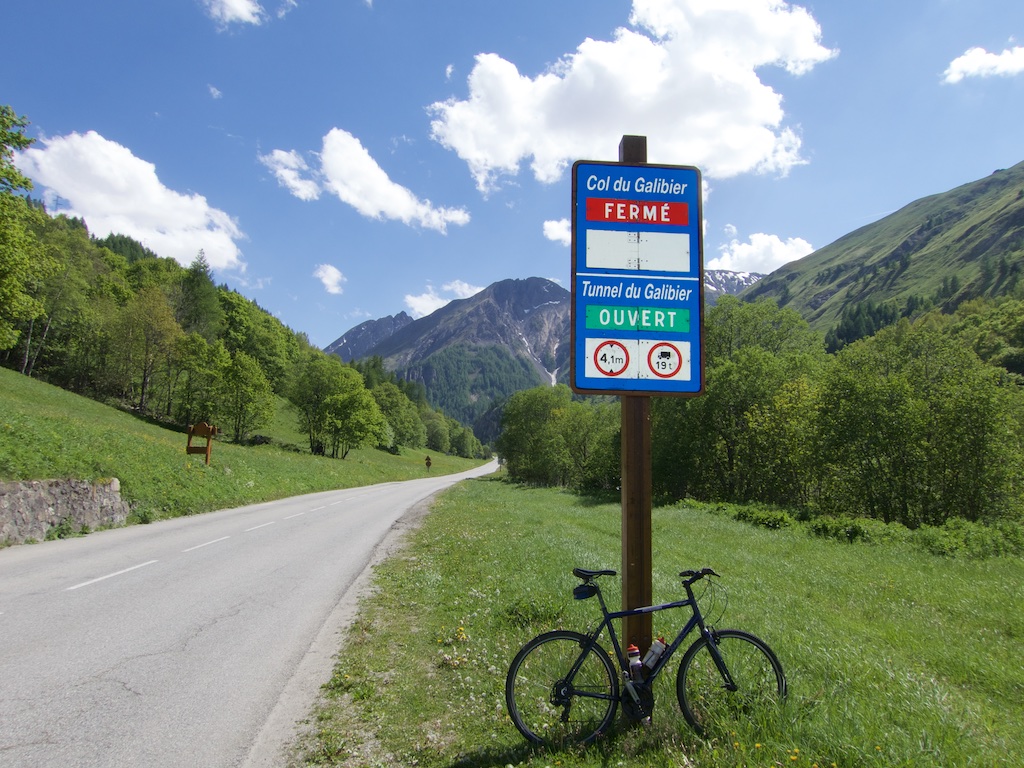 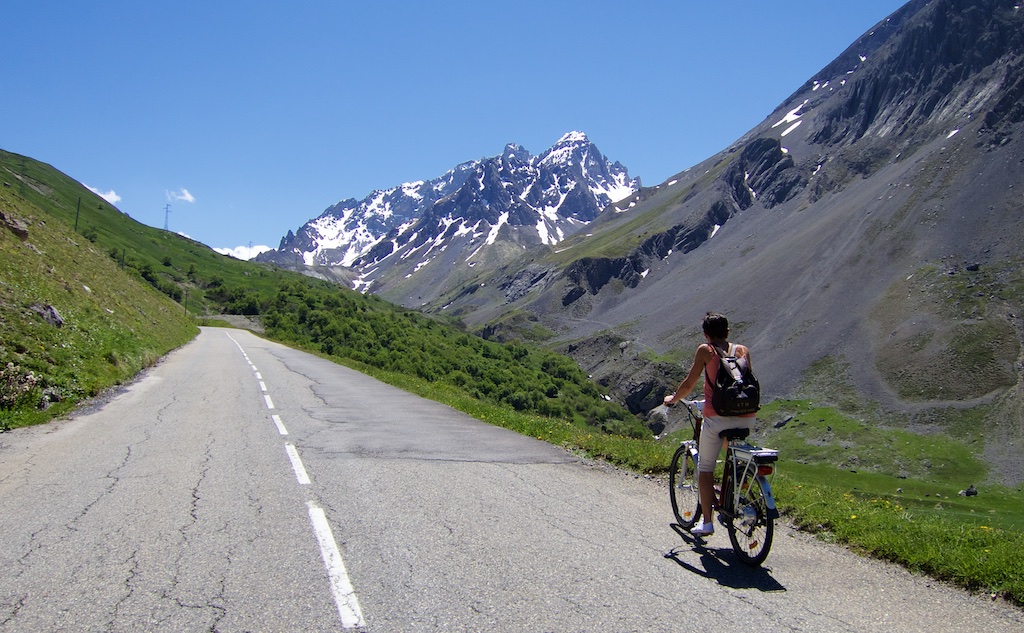 For details of the “usual” road bike routes up both sides of Galibier see here. 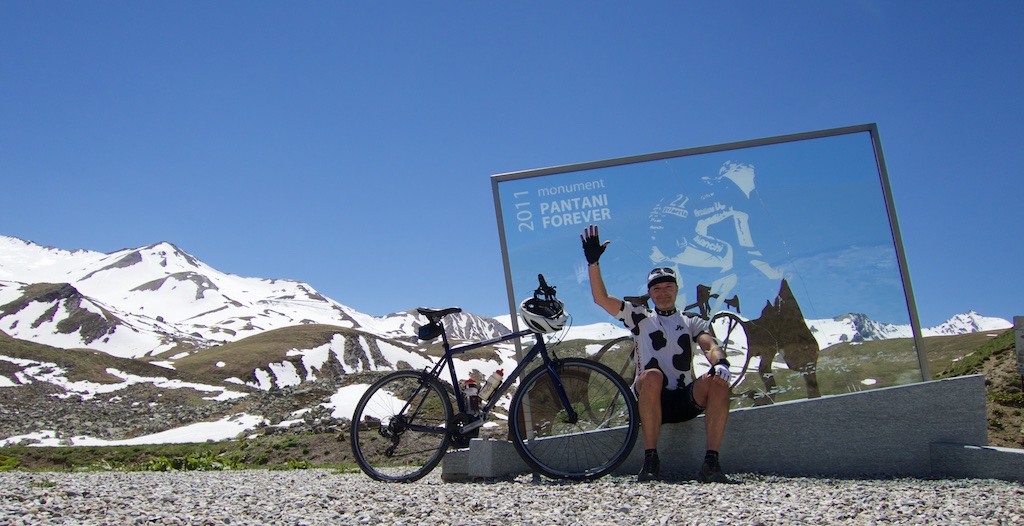 The Col is that little dent just left of my saddle 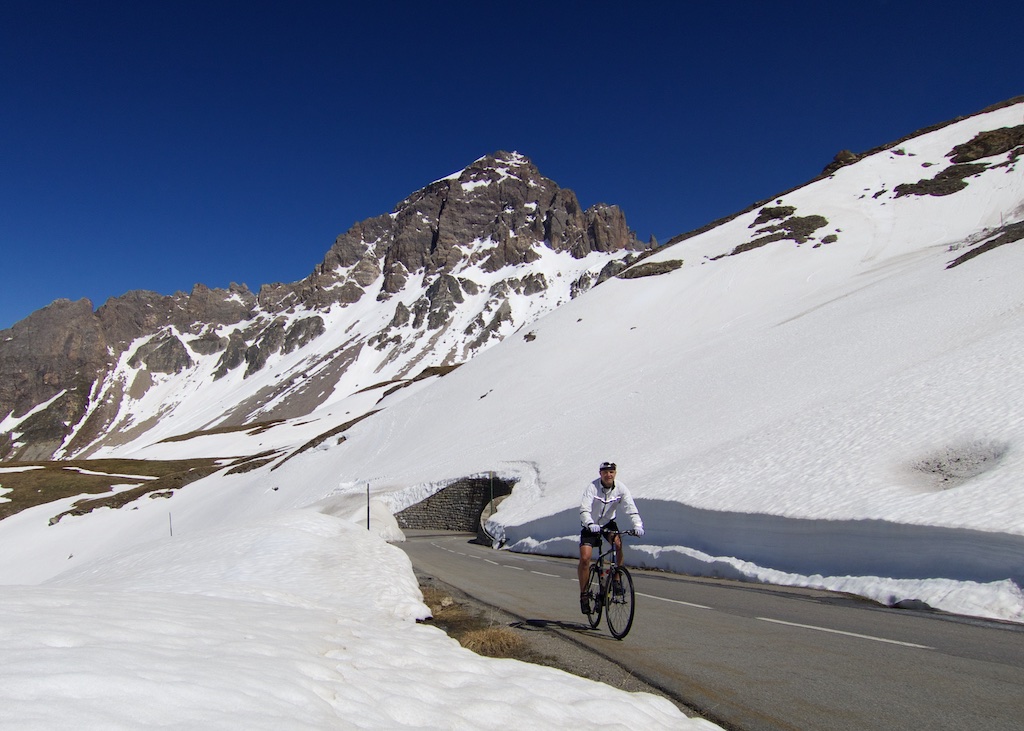 Peak behind me is Le Grand Galibier – 3228 metres

I reached the Tunnel (2556 metres) and indeed the road to the col was shut.

north side closed above tunnel

But I decided to have a look anyway. Initially it was quite clear, then I had to pass a short snowy section. No worries: 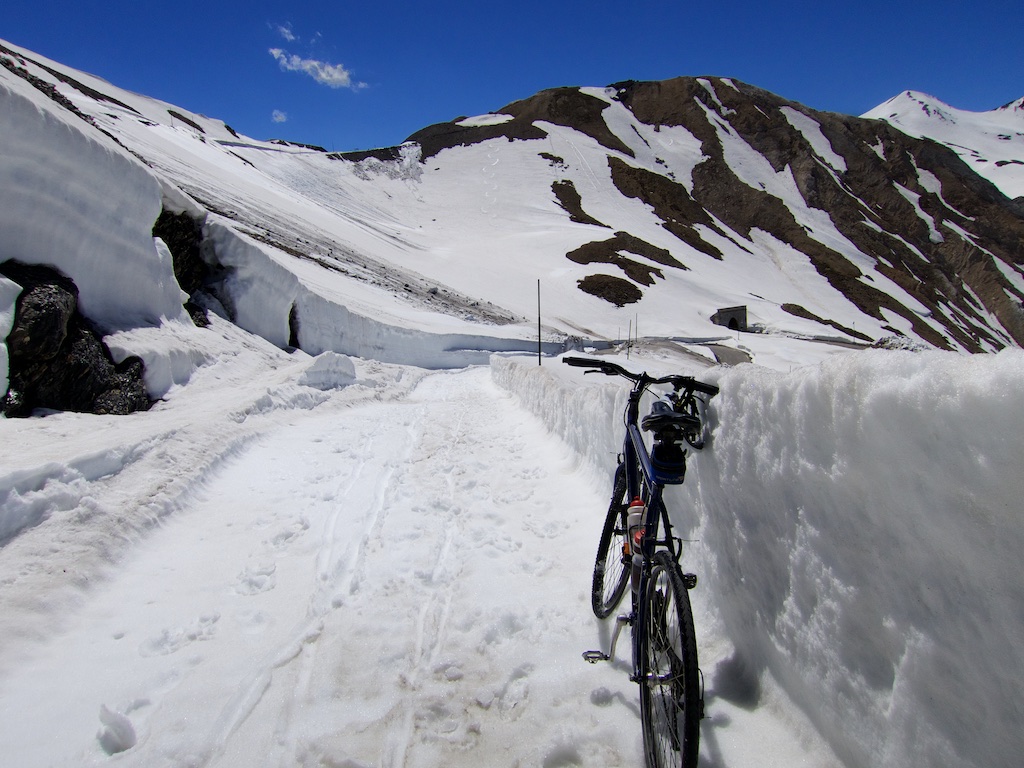 Above tunnel – north side

The road cleared again, and I rounded the last bend confident of success: 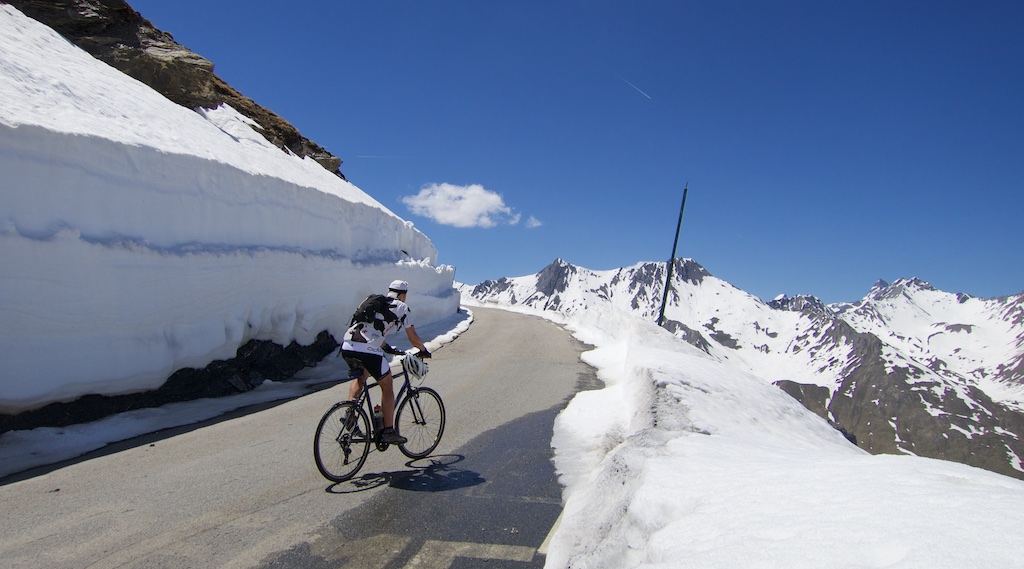 north side – above tunnel

But as the Col came into view, it became clear that there had been an snow avalanche and the road was completely blocked. Yikes! 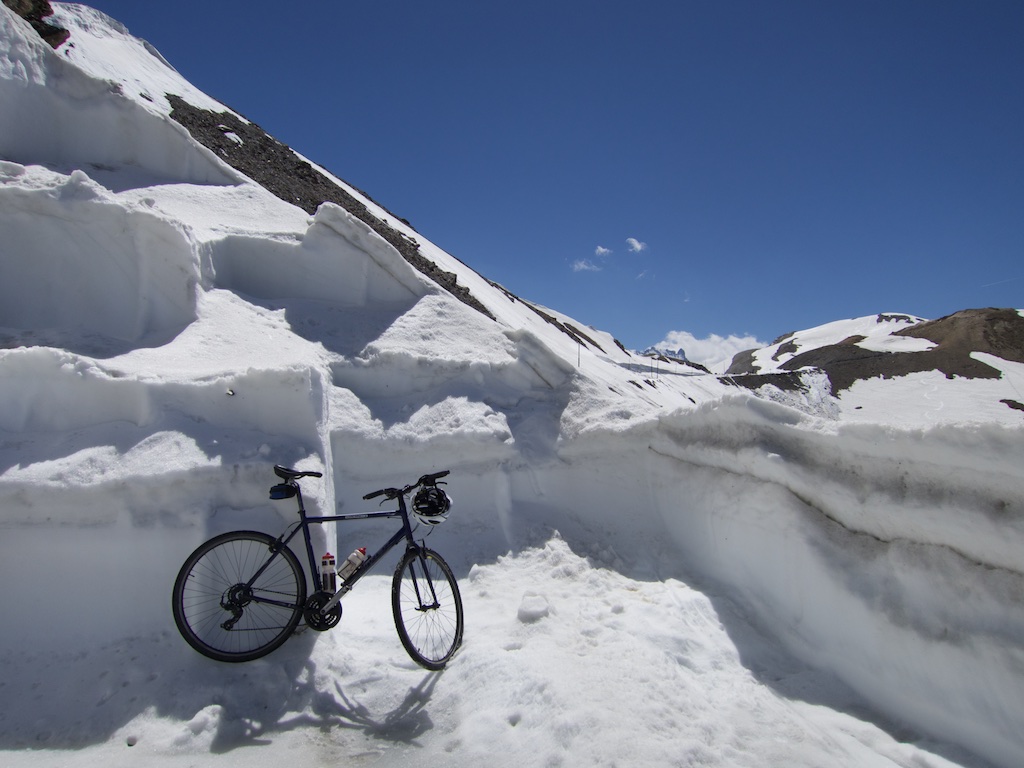 Just a few hundred metres from Col. That is the road through my bike. North side.

I had a peek over, no foot prints, and it looked quite dangerous. I am stupid but not crazy, so I headed back down. Damn.

But earlier in the day a road worker had told me that I could pass through the tunnel – usually banned to bikes – if I was careful. So I did. It’s a single lane road, but traffic lights let me know when I had the best chance of getting through.

Col du Galibier was first made crossable for military purposes in 1879 with the sexy name: “Routes des Grands Communication #14.” To simplify the crossing, a tunnel was finished in 1891, roughly 90 metres below the summit. The Tour de France passed through the tunnel – at 2556 metres – until 1976 when it was closed due to disrepair. Instead, the road above the tunnel was improved on both sides – providing the most spectacular stretches and steepest cycling of each side – and a summit of 2642 metres. The tunnel was re-opened in 2002 – for cars only. But from 1976 onwards, suddenly the route to Galibier was higher and roughly a kilometre longer. 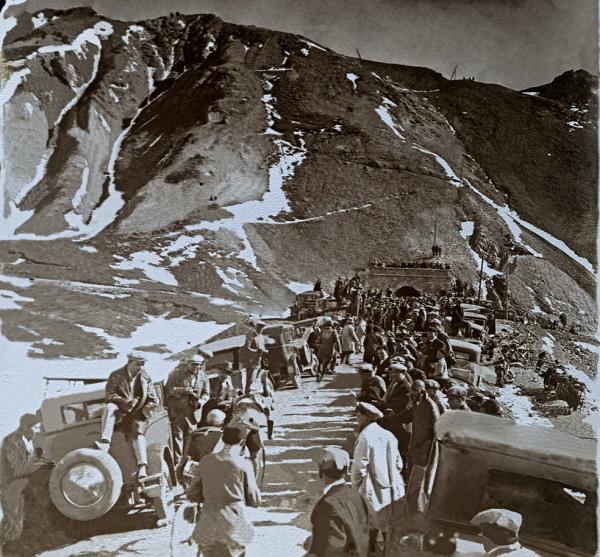 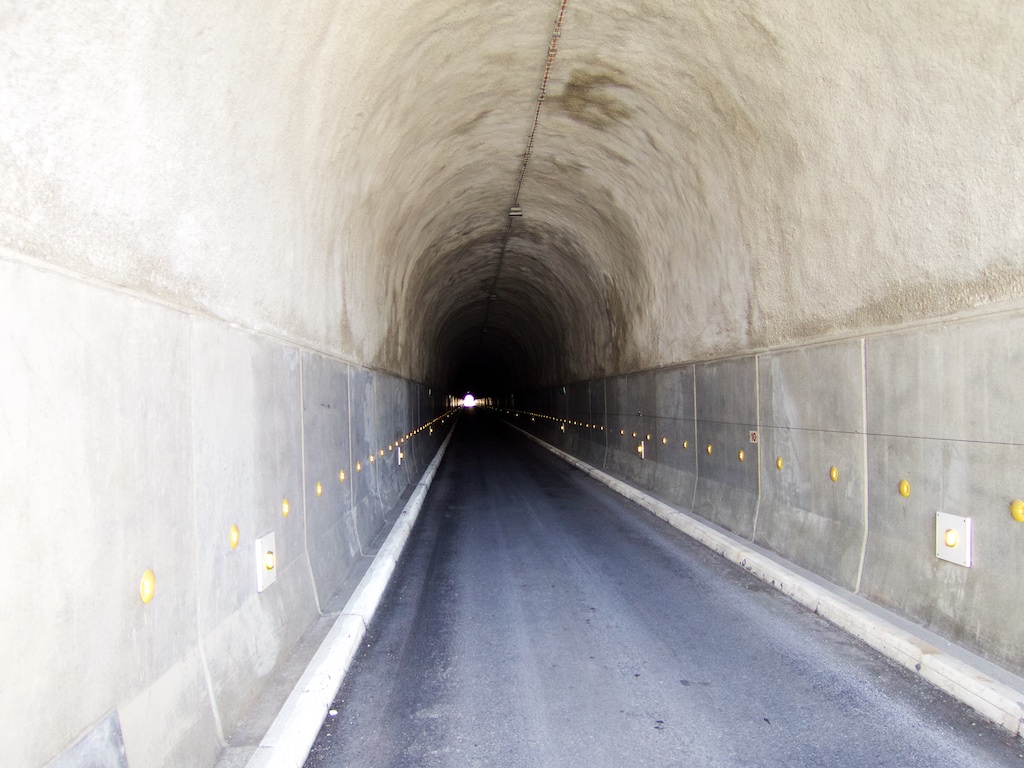 As I exited the south side of the tunnel, I saw the extension to the Col was also closed here – but again, I headed up. The road was completely clear. No problems at all. 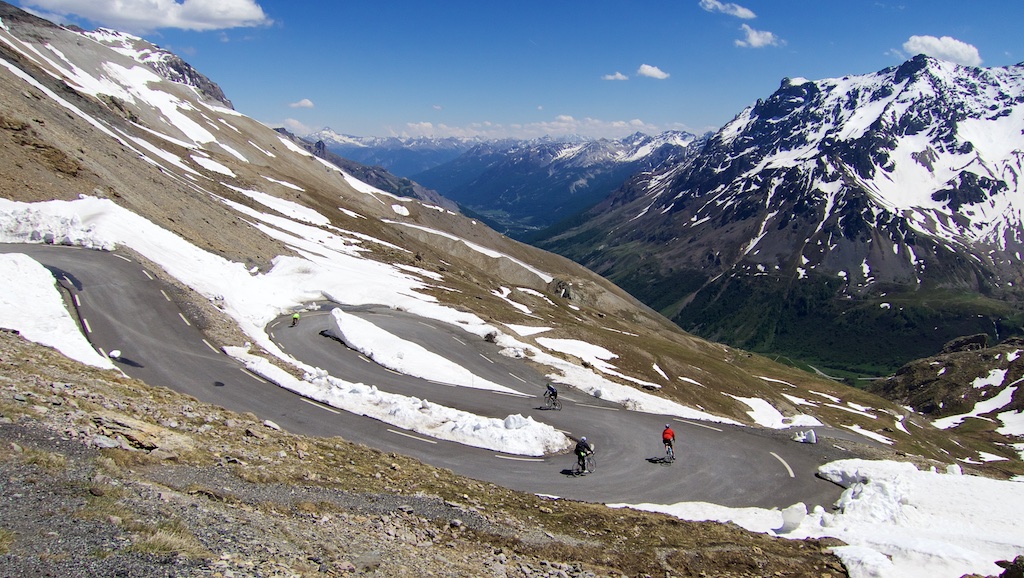 And finally, voilà, I was at the Col: 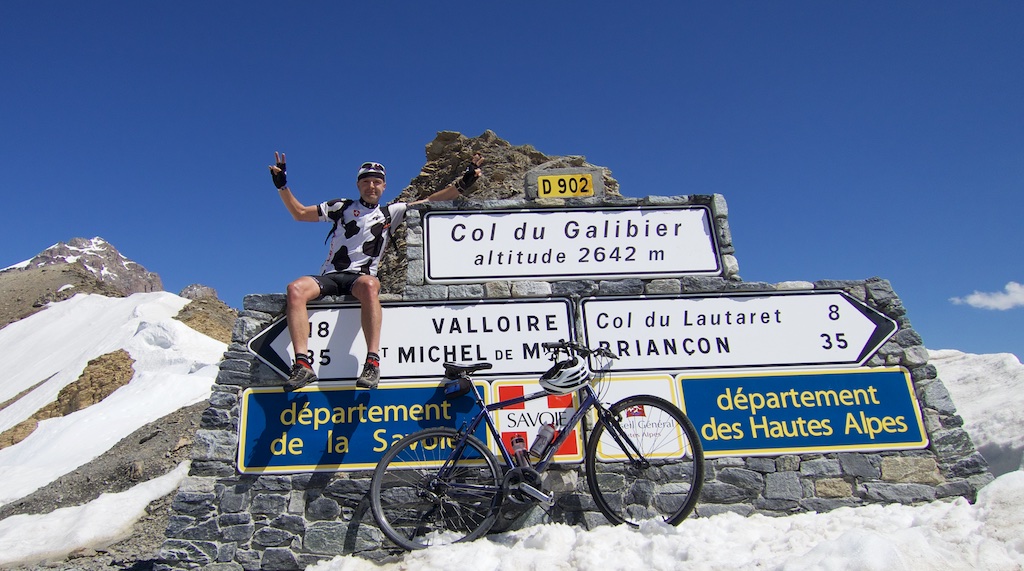 I love how someone has chalked a border between Savoie and France. Vive Savoie Libre! 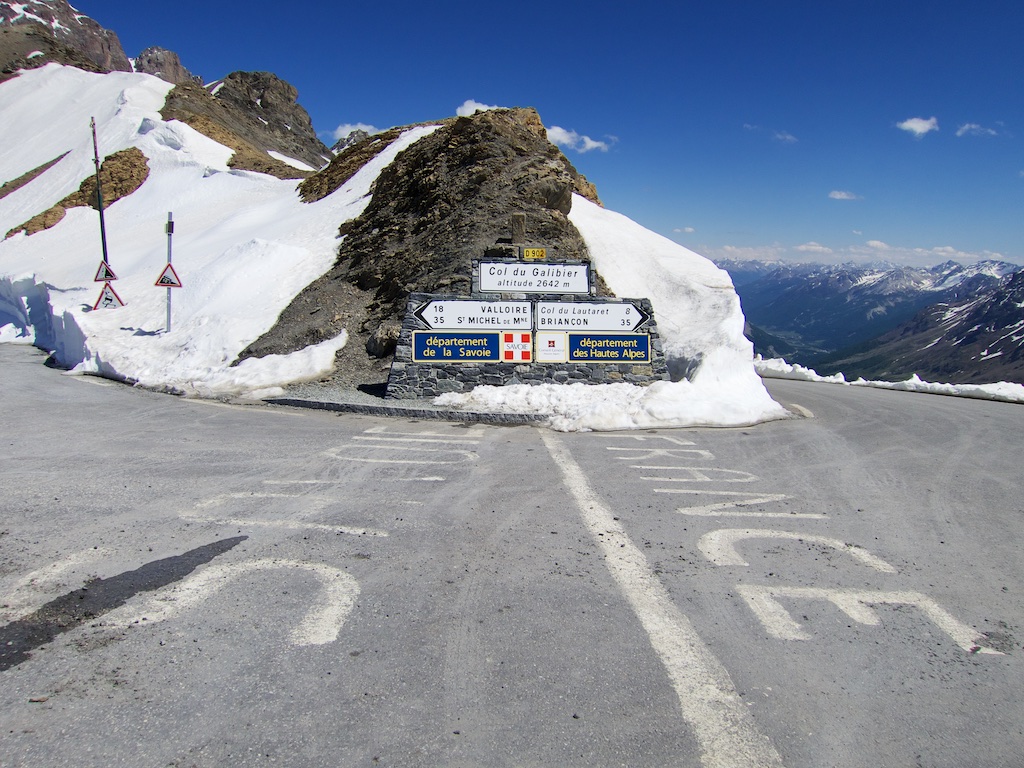 I headed down the north side to have a look at the avalanche.

Top of Galibier – view of south side

I descended back to the south side of the tunnel, bracing myself for another tunnel-traverse (I am a tunnel coward – see here for some of the “best” in the Alps).

So I rewarded myself with a celebratory Galibier beer beside the Desgranges monument. 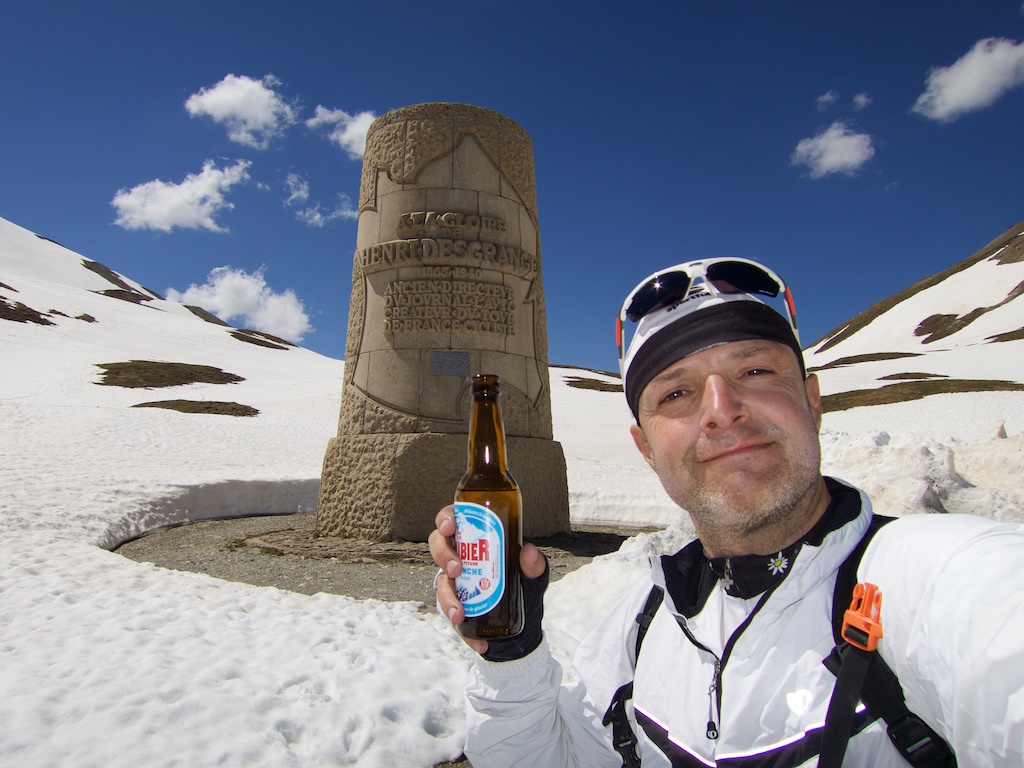 Nothing left to do but descend 35 kilometres – see map: I took the main road via Télégraphe – to the Maurienne valley floor, then unfortunately a few kms on a busy road (with a bike lane though) back to the start.

I was exhausted but thrilled. A successfully Galibier adventure. 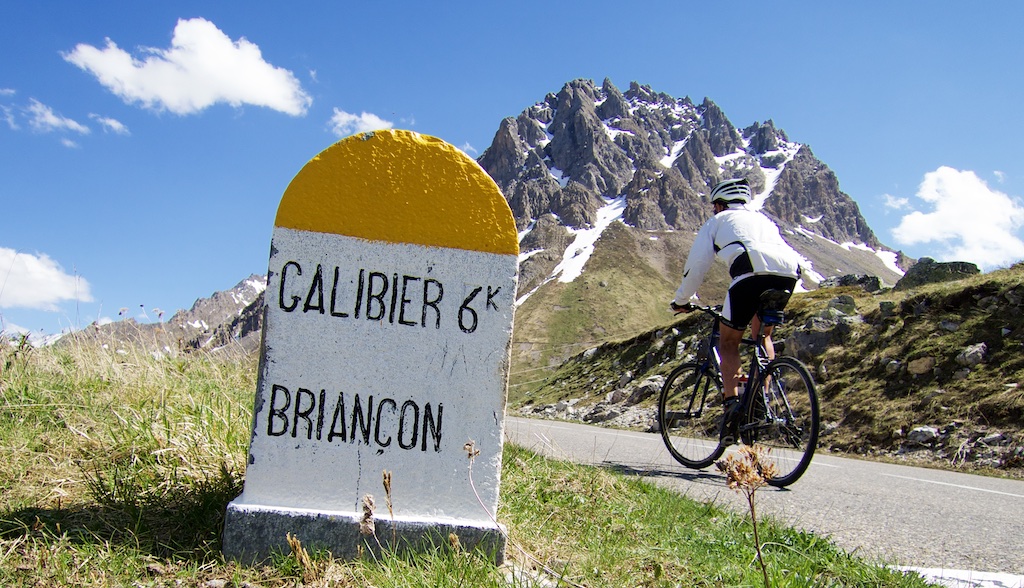