Trending
You are at:Home»Famous»Col du Galibier – A Complete Look

Col du Galibier opened early this year, giving me the good fortune to cycle it in May for the first time. I realised I already have ten or so Galibier posts, so I thought I’d write one master post:

Below I will discuss all three sides up this great mountain – with a map at the bottom. But first, here are a few links to other posts:

The Classic North Side via Col du Télégraphe

This is easily my preferred side. Starting from St-Michelle-de-Maurienne, it is 35 kilometres to the summit of Galibier.

First, cyclists have to climb Col du Télégraphe. It’s 12 kms at a very steady 7% or 8% on a good quality wide road winding up to the Col and the Fort du Télégraphe. A pleasant start. From the Col it is four or five mainly downhill kilometres to the ski-station village of Valloire.

Me on Télégraphe during La Marmotte

View of Télégraphe from across the valley

After Valloire is my least favourite part of the climb. It starts easy, but there are 8 or so tough kilometres with few hairpins. It looks easy, and feels difficult. 🙂

At roughly 2000 metres of altitude, with 8 kms until the summit, the route reaches Plan Lachat (2 little hut restaurants and a million sheep). Here, the route just turns up. Nothing but painful fun.

After the brilliant hairpins above Plan Lachat the road passes Les Granges du Galibier – a couple of little cabins and a small snack bar. The Marco Pantani monument is also here, erected a couple of years back, Pantani won a huge Tour de France stage in 1998 at Les Deux Alpes after climbing Galibier.

Approaching the tunnel. The goal is straight up: 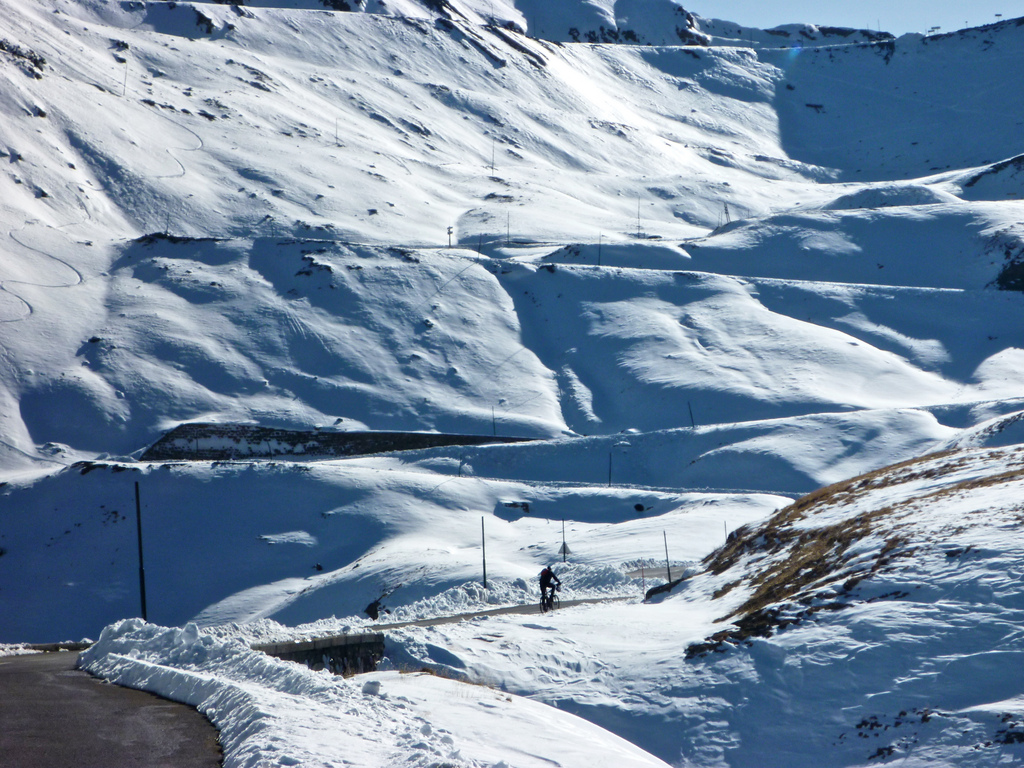 The tunnel (no bikes allowed) is roughly a kilometre from the summit. And above is truly a delight.

View both of sides from above Col: 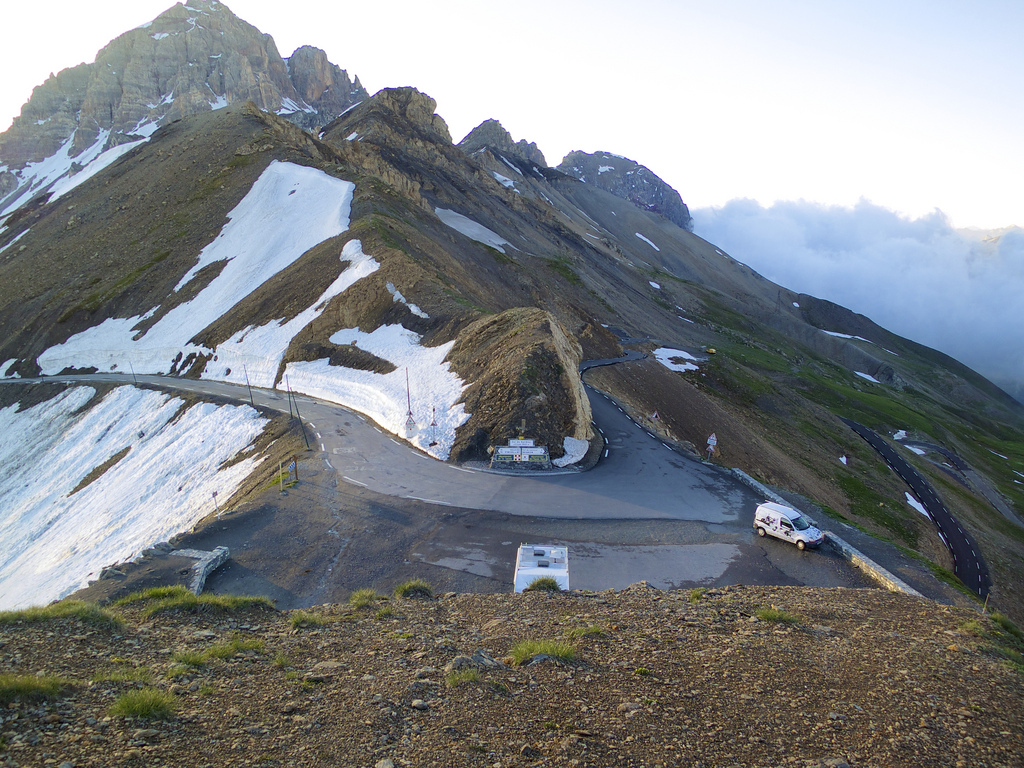 The South side from Briançon 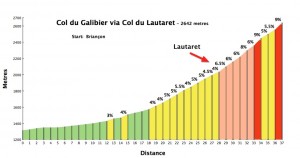 Both south sides run along a main road. Usually not too busy but definitely some faster traffic. From Briançon, most of the way is quite easy, until Col du Lautaret.

At Lautaret, the route leaves the main road and climbs 8.5 marvellous kilometres to the summit. A few times I have just parked at Lautaret and skipped the lower stuff.

It’s not the steepest stretch, but so beautiful winding up the mountains. Just before the tunnel entrance it is impossible to miss the monument to Henri Desgranges, Tour de France founder. 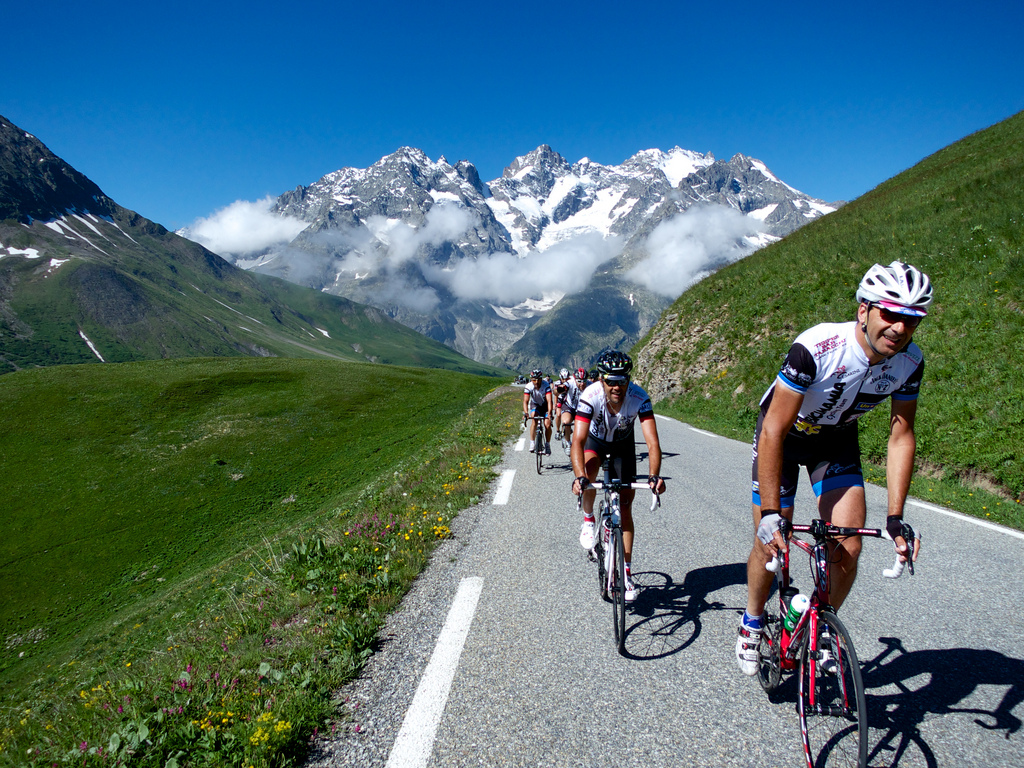 The South side from Les Clapiers 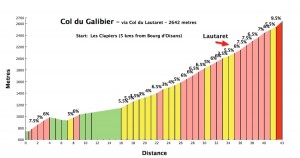 Honestly, I included this only for completeness. This side starts near Bourg d’Oisans – the base of Alpe d’Huez – so it is a common route among cyclo-tourists based below that want to cycle Galibier after conquering the Alpe.

But this side is perhaps the worst big climb in France. Ten tunnels, several long, dark, narrow, wet, with fast traffic, including trucks as this is a main through road. No thanks. This sucks enough descending – La Marmotte does this – but climbing is just madness in my opinion. And I’ve met many unhappy tour group participants that agree. But it’s your choice.

(Oops, sorry to end this post on a downer)

Col du Galibier is one of the most famous and highest passes in cycling. If you can, climb the north side. If you’re on the other side, don’t be a purist. Go to Col du Lautaret and just cycle the last, awesome 8.5 kilometres. 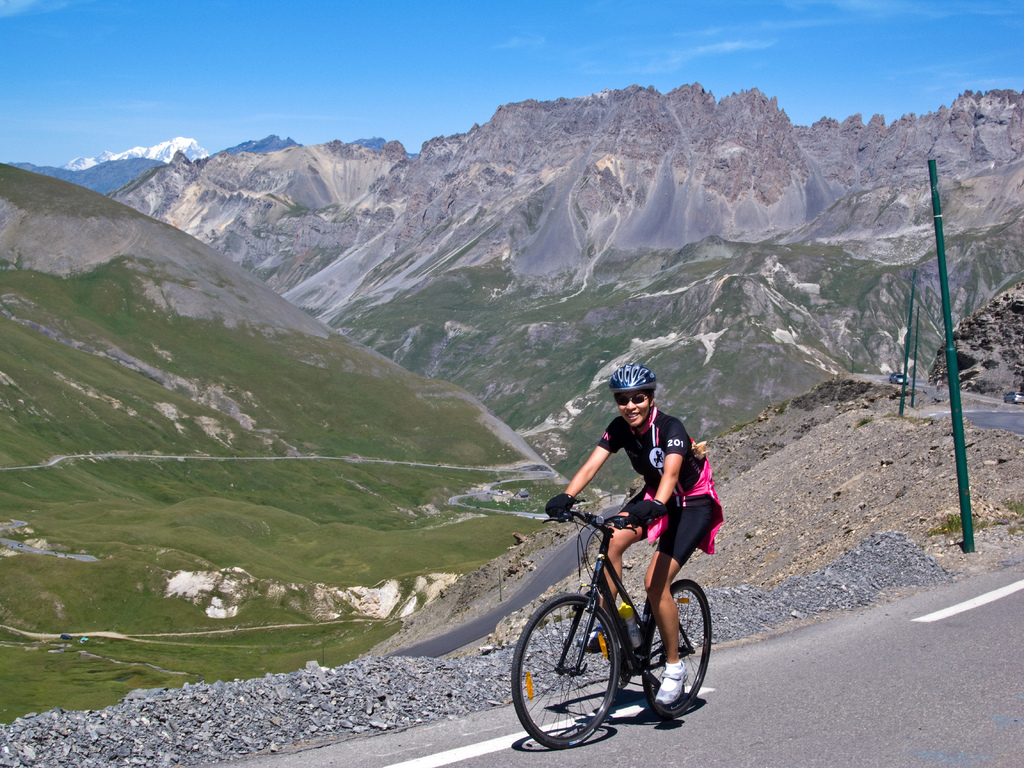