Col du Mont Cenis is a mountain pass on the French/Italian border. At the summit is a huge lake created by a dam. From (possibly) Hannibal, to Charlemagne, to Napoleon, to the Tour de France, it has an interesting past. See this post for a brief history: Mont Cenis: From Elephants to Emperors to … Cyclists

I love big beautiful cycling climbs that can be visited several times yet be explored differently each time. The primary goal of this ride was to explore a tiny alternate paved route up the Italian side via the little village of Moncenisio. Don’t worry, almost the entire ride is perfect on a road bike. The final unpaved extension above Lac du Mont Cenis is “optional.” 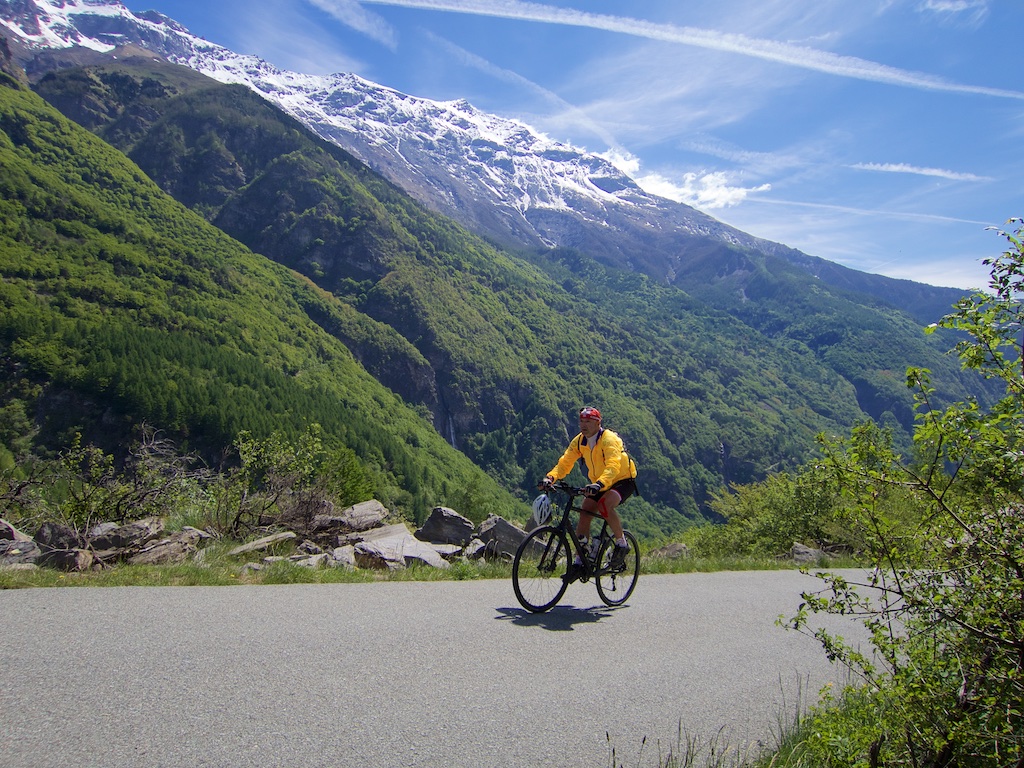 Like the main Italian route, this alternate 3rd way starts in Susa. Look at my 2nd map below closely as I found the perfect quiet road to leave town from a main square.

Much of the first 9 kilometres are false flat along a wide road. But at Novalesa the fun starts. The route turns onto a tiny road that just heads up. Loved it.

It is narrow but decently surfaced and I never saw a car. Look closely at the map and you’ll see a series of tight hairpins. tough to photo, but fun (and steep). 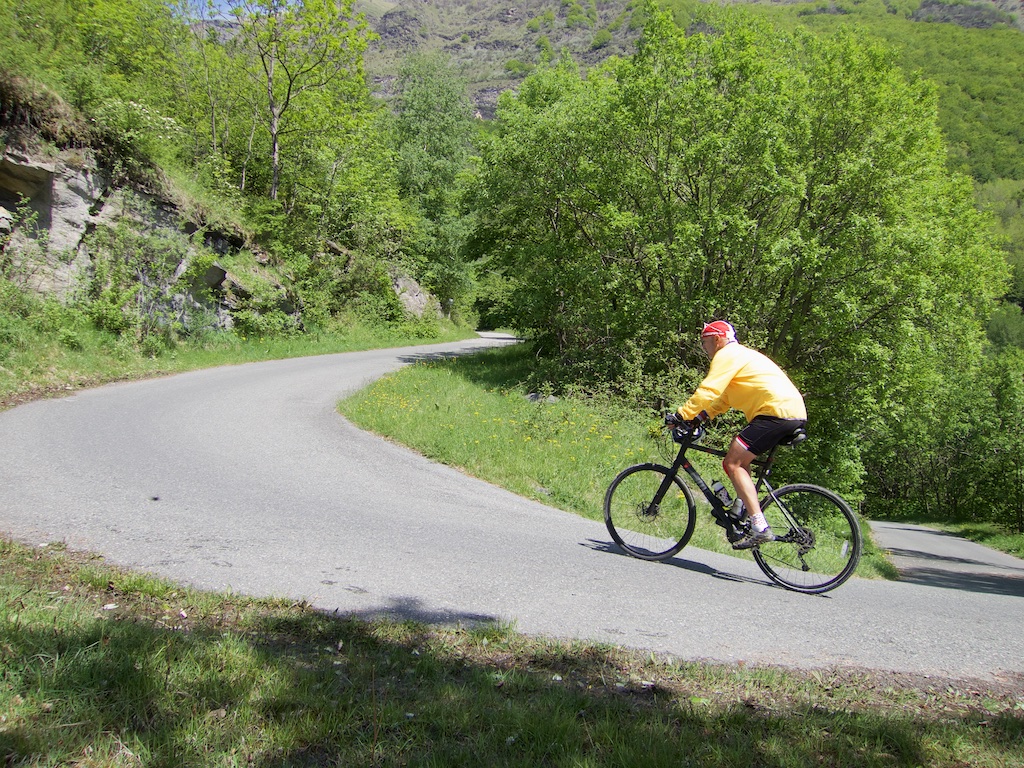 Moncenisio (1435 metres) is a quaint little village tucked into the mountains. After passing the village and Lago Grande, the route gently heads downhill along a fun cliff road for 5 kilometres, eventually joining the main road to Mont Cenis at approximately 1300 metres.

Last year, Doreen and I stayed in Moncenisio for a night in a little hotel. After dinner we were locked in the restaurant and forced to perform Italian karaoke (more fun than it sounds).

The Italian side of Col du Mont Cenis, from Susa (500 metres), starts almost a full vertical kilometre lower than the French side from Lanslebourg (1400 metres). Details of both sides here. the link includes a fantastic paved detour higher to Col du Petit Mont Cenis. Highly recommended.

Rejoining the main road, it’s still a long way to go. And while this road has more traffic than the Moncenisio road, it is wide, plus trucks and through traffic seeking France generally take the nearby Fréjus tunnel. After World War 2, the border was moved from the top plateau down well into Italy. So France begins well before the huge dam, a couple of kilometres before a fabulous series of hairpins: 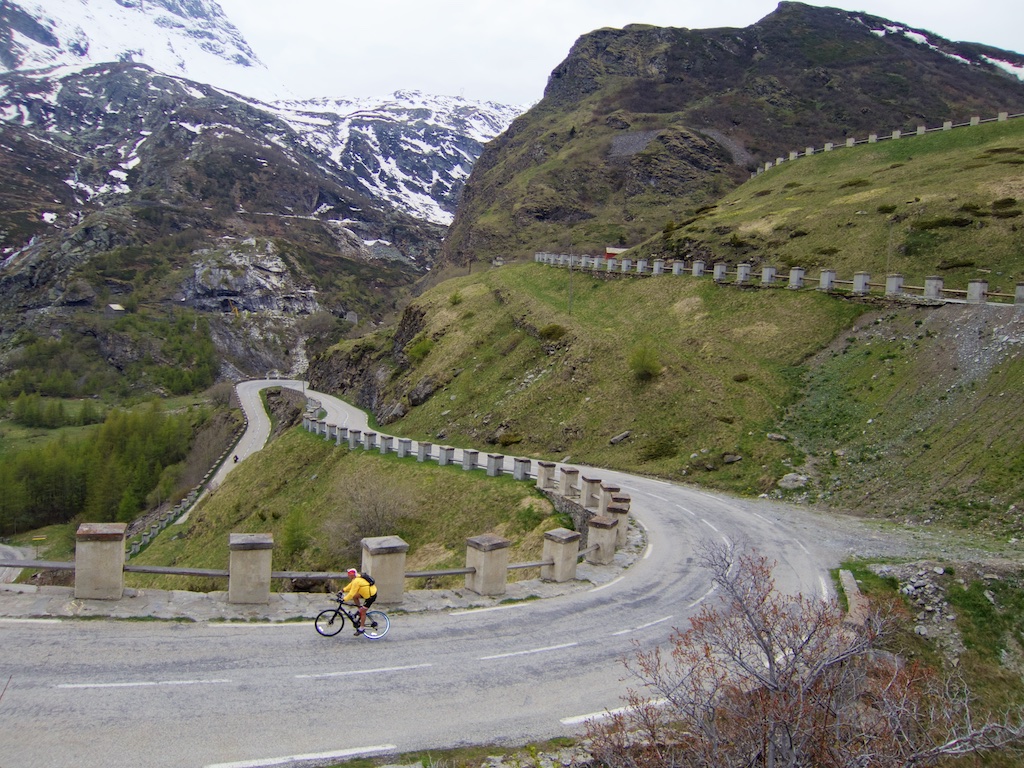 The geographic col is beyond the far side of the lake, but the road reaches and even surpasses the col height as it reaches the dam at the near side of lake. It was overcast and the beautiful lake was far from full but still a lovely setting.

The route until now was completely paved and perfect for a road bike. But I had brought my hybrid with another adventure in mind.

Near the dam, I turned onto the Sentier des 2000 metres. This is an old military road, now a muddy, gravel/grass path. It leads to superb views over the lake, and eventually to Fort de Ronce at 2286 metres.

Fort de Ronce was built from 1877-1880, soon after the “creation” of Italy – originally on Italian territory.

The descent from the fort still had quite a lot of snow, but it was easy enough to hike through:

I had planned to cycle around the lake (the far side is gravel – see green route above), but I could see that it was still covered in snow. So I kept things simple and just descended the main road all the way down to Susa.

This 3rd way up was as remote, quiet, and fun as I’d hoped. I’d recommend it over the main road. Up higher, there are more military fort detours possible on the far side of the lake. Maybe a return visit on a sunnier, warmer day when the lake is full.