Last summer I cycled Col du Granon from Briançon and visited several unpaved cols above. During the ride I kept looking at the high mountain ridge across the valley above Serre Chevalier. I thought I could see some unexpected roads among the peaks. I made a note. 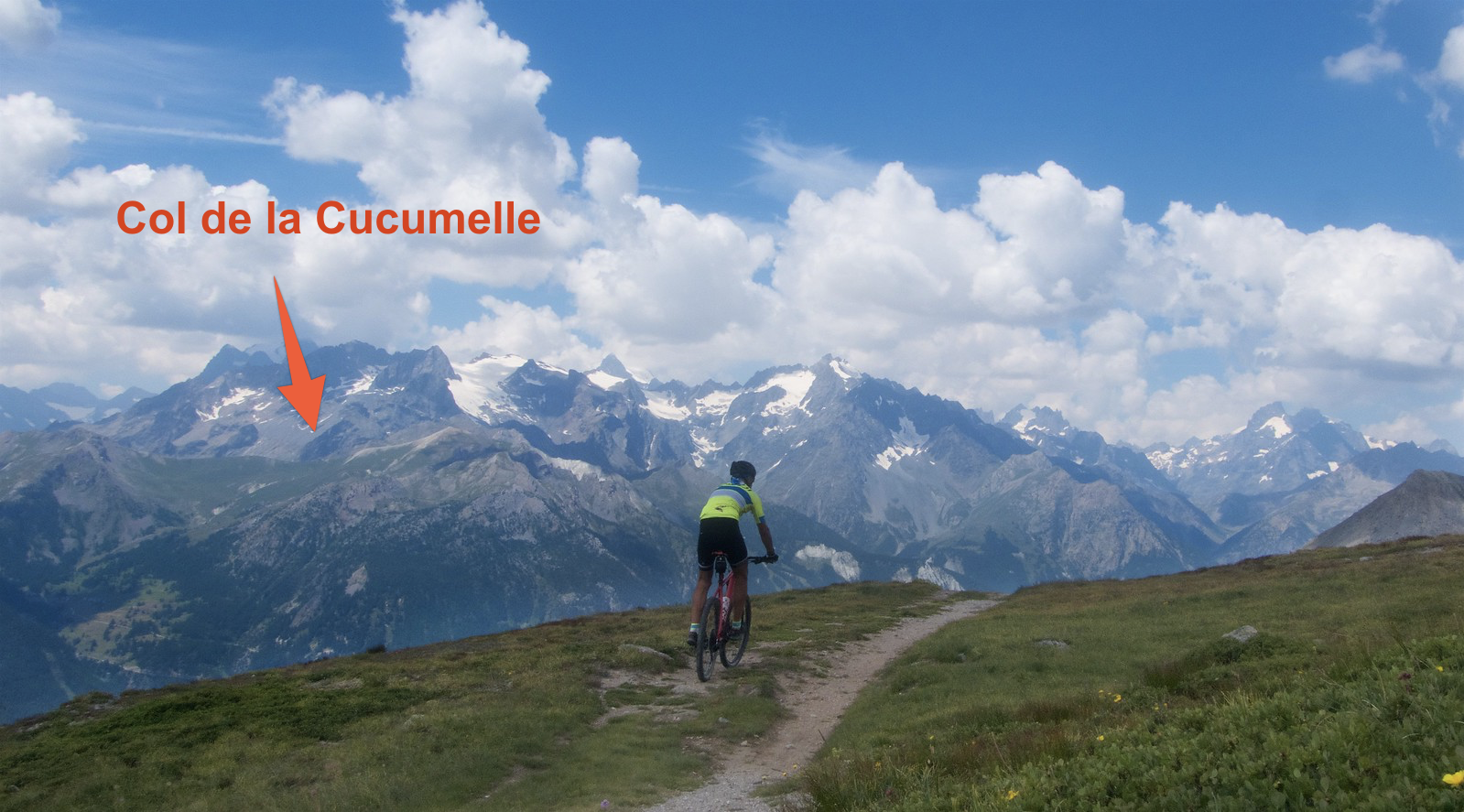 All the cols are labeled on the profile below the map.

I started at the McDonald’s just above Briançon allowing me to immediately be on a tiny, quiet road. After a few kilometres it becomes gravel, climbing through a mountain forest. Completely deserted. After roughly 10 kilometres I would pass into the ski domain.

I had a gravel bike, but a mountain bike would have been a better choice. I would at times follow trails, but the toughest stretches were all super steep gravel roads – including much of the final descent from 2501 metres.

The final 2 kilometres to the first col, Col du Prorel is crazy steep. How much you can cycle depends solely how strong you are. I would walk some stretches and then get back on the bike. 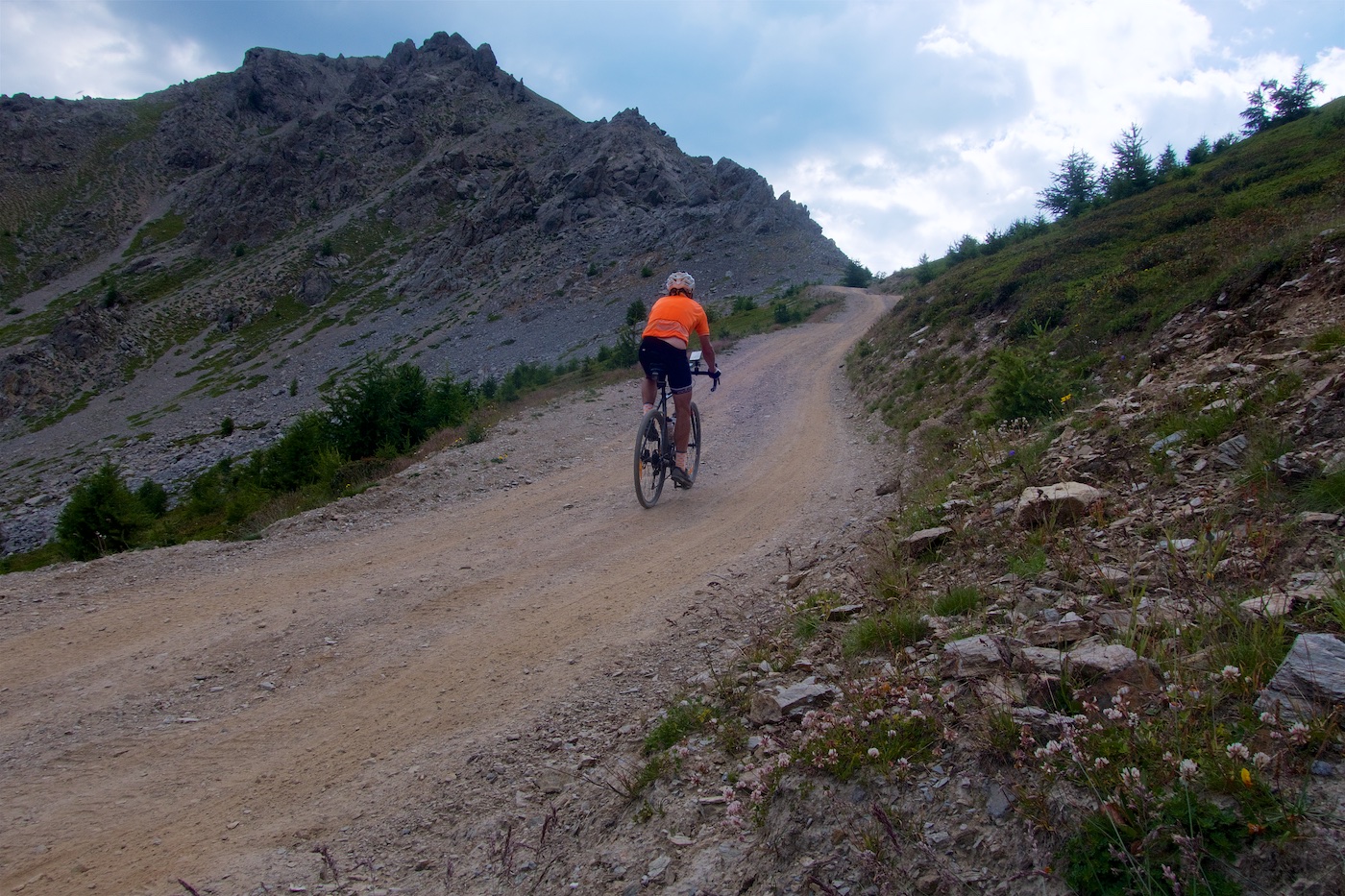 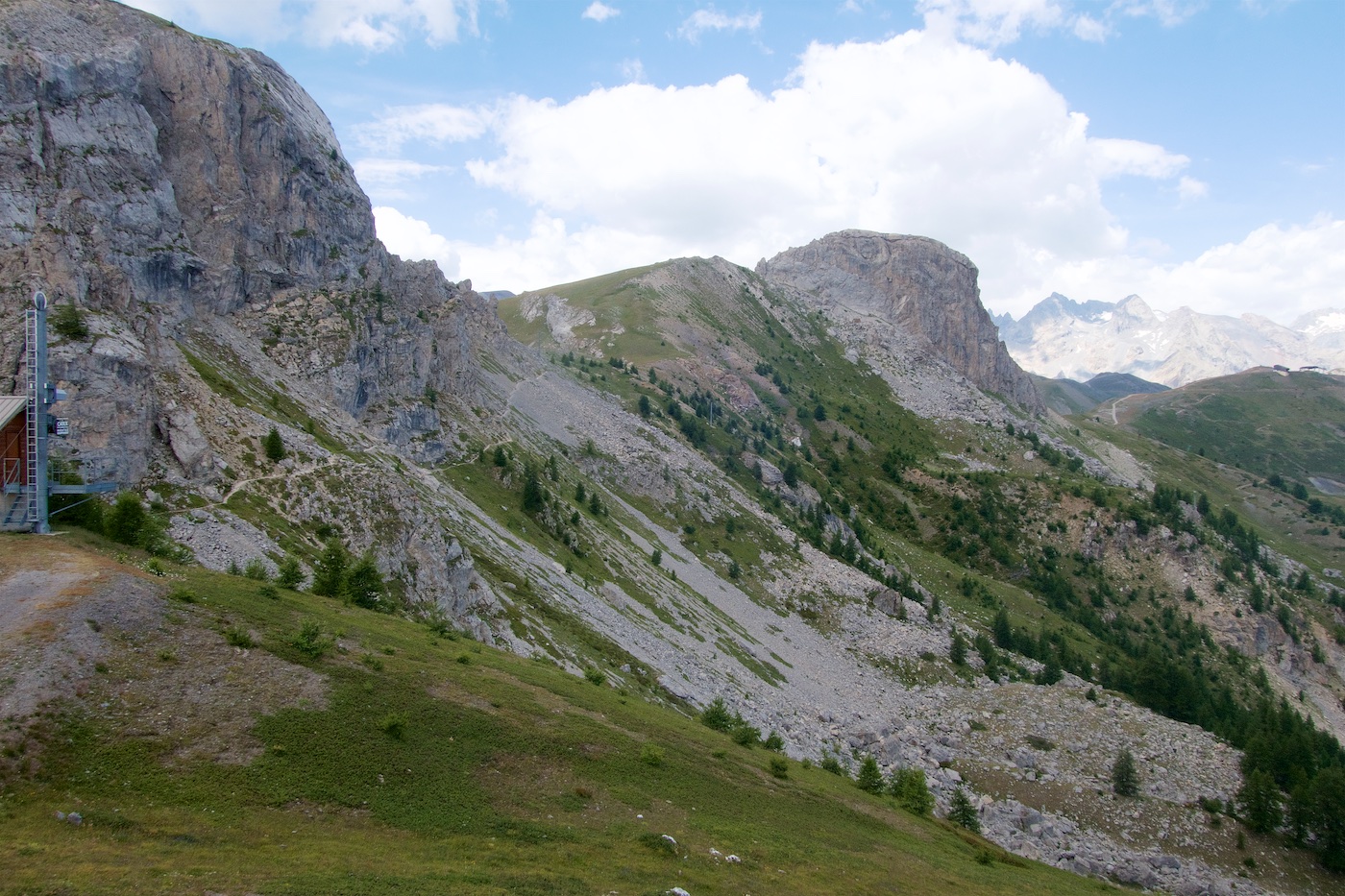 Instead I descended a couple of kilometres, passed a very nice man-made lake, and climbed a gravel road up to the col. 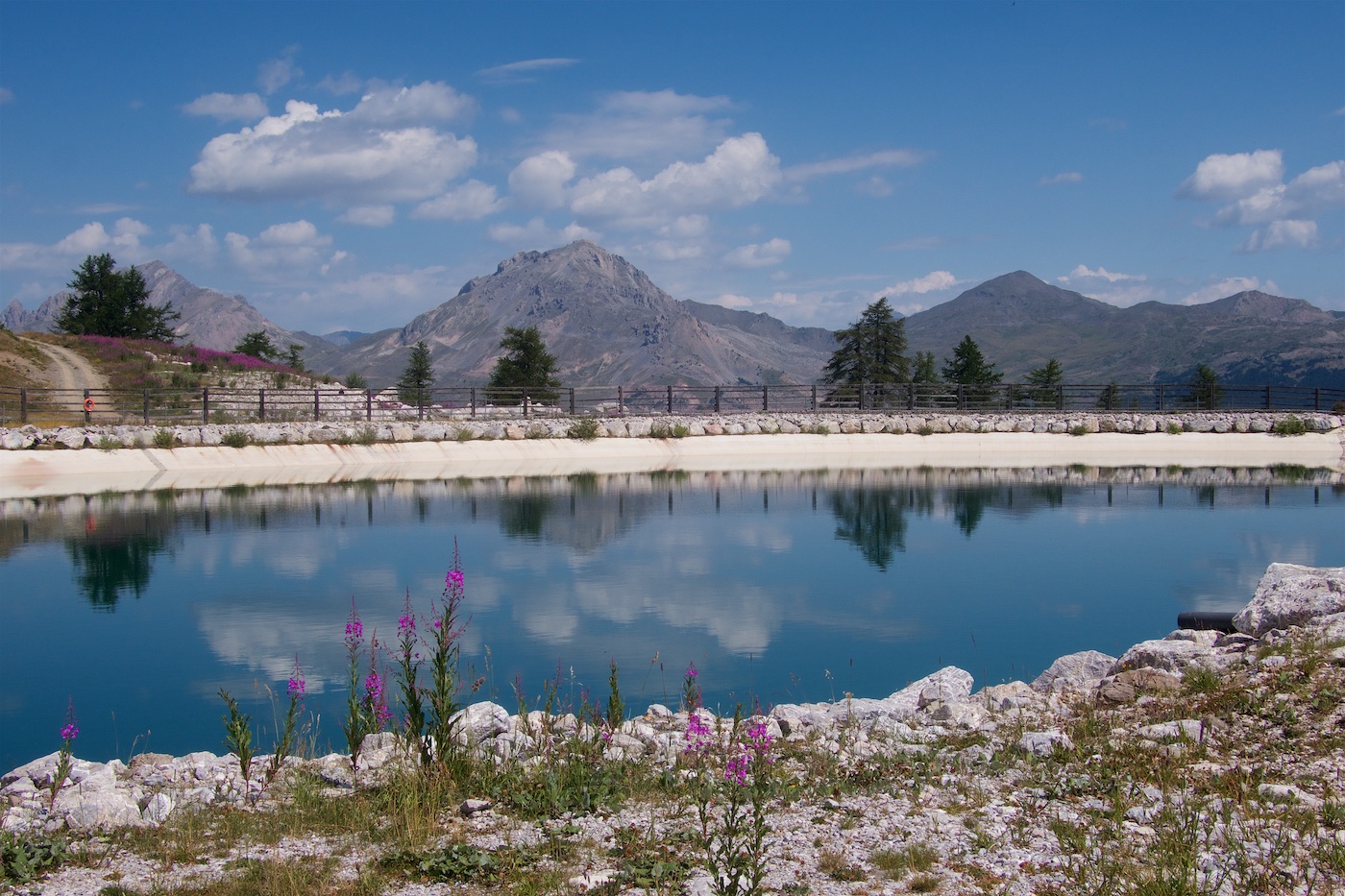 At the top of a chairlift I would take a hiking trail to traverse to Col de la Ricelle. Beautiful up high. 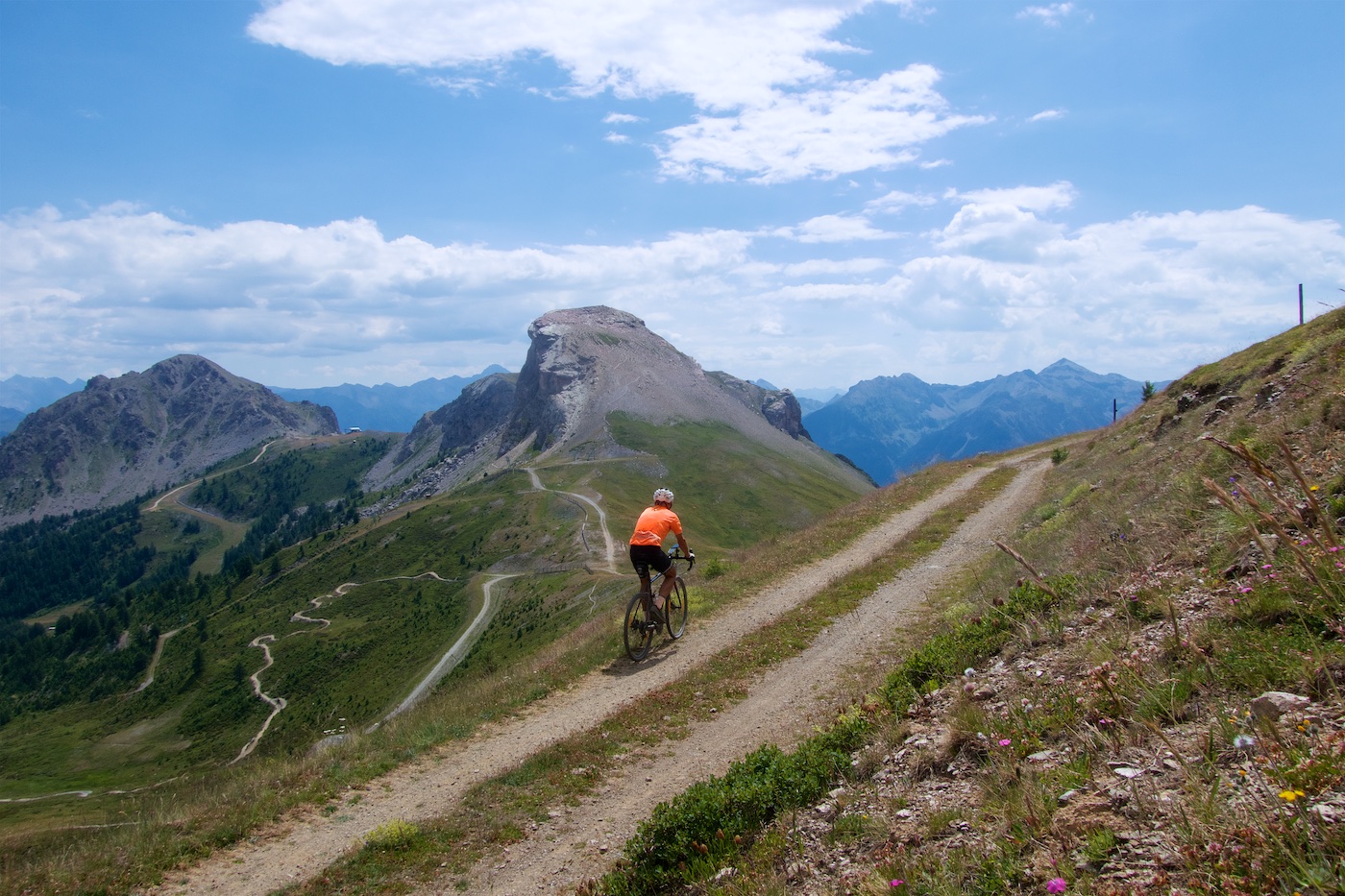 Next, if you look closely at the map you’ll that I would take a round-about route to Col de Serre Chevalier. It’s possible to go over the ridge, more directly on a hiking trail. I decided not to as it looked tough and I wasn’t certain I could continue over the col …. but I saw later that the hiking trail continues. Note, just after the 21 km point of the route, I joined an official signed mountain bike route (#33). It’s not remotely technical, and I would follow it as it eventually turned into a gravel road to Col de Méa.

On the way, I would get a view of my route along the second half of the ridge ride – drool. The third arrow indicates Col de Méa, the 6th is Col de la Cucumelle: 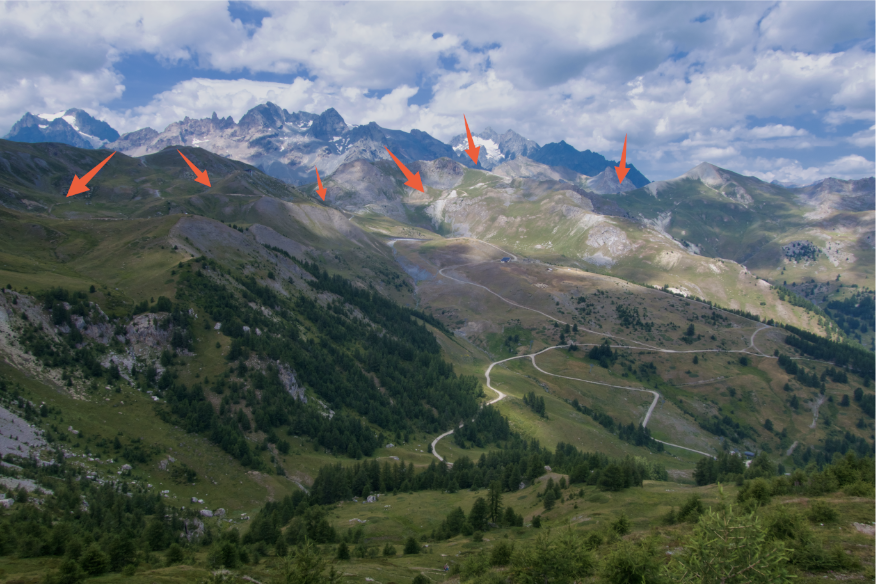 But first, I would do a quick there/back to the far side of Col de Serre Chevalier as I could see it was easily reachable on a trail. Here, I made a routing mistake. I would later learn (staring at a map) that at Col de Serre Chevalier, the trail in the photo below would have led me eventually to the brilliantly named Col de la Pisse. Oh well, next time. 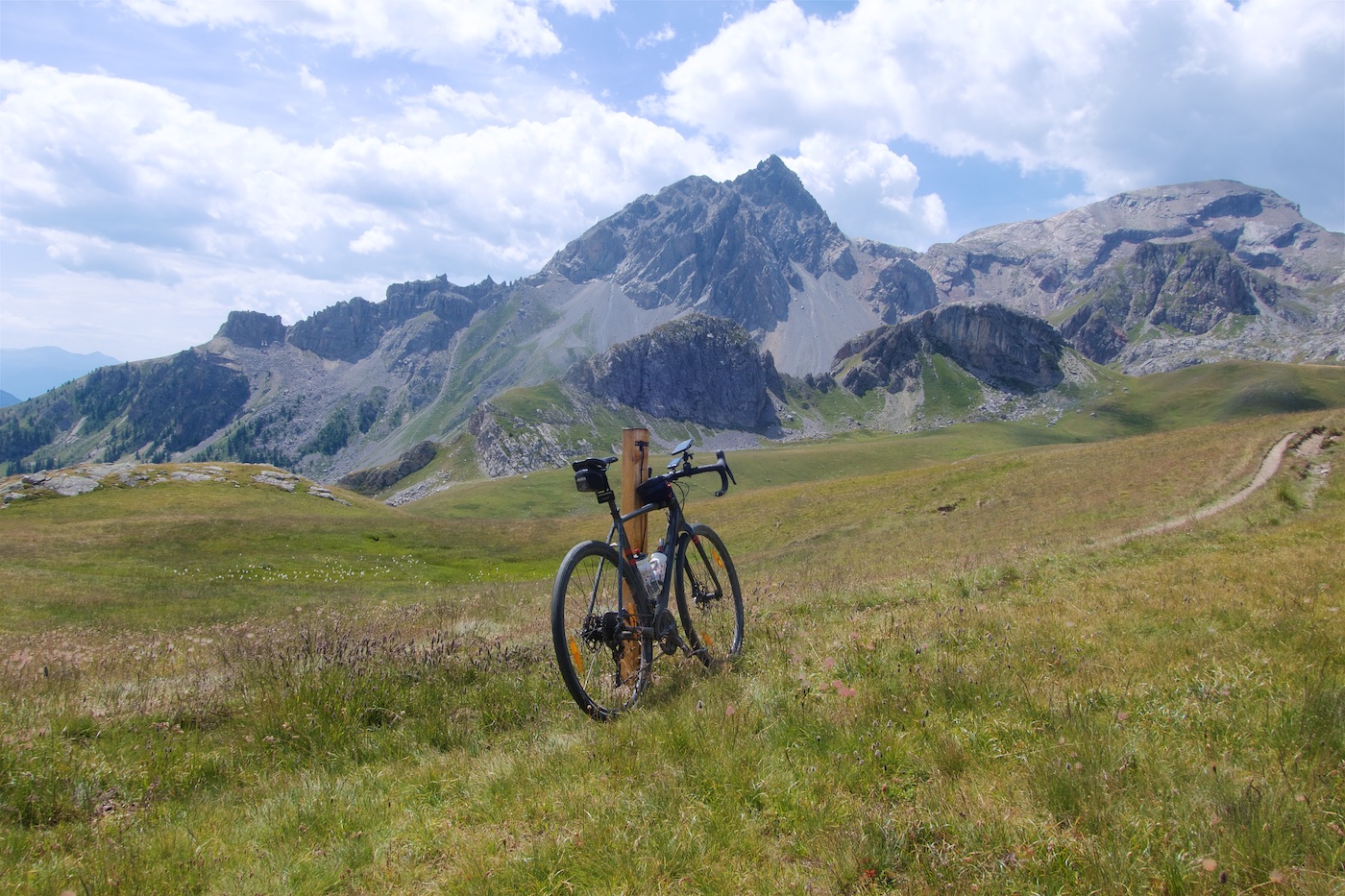 The next part is where the route gets great. From Col de Méa I could see the most amazing road up the Roche Gauthier: 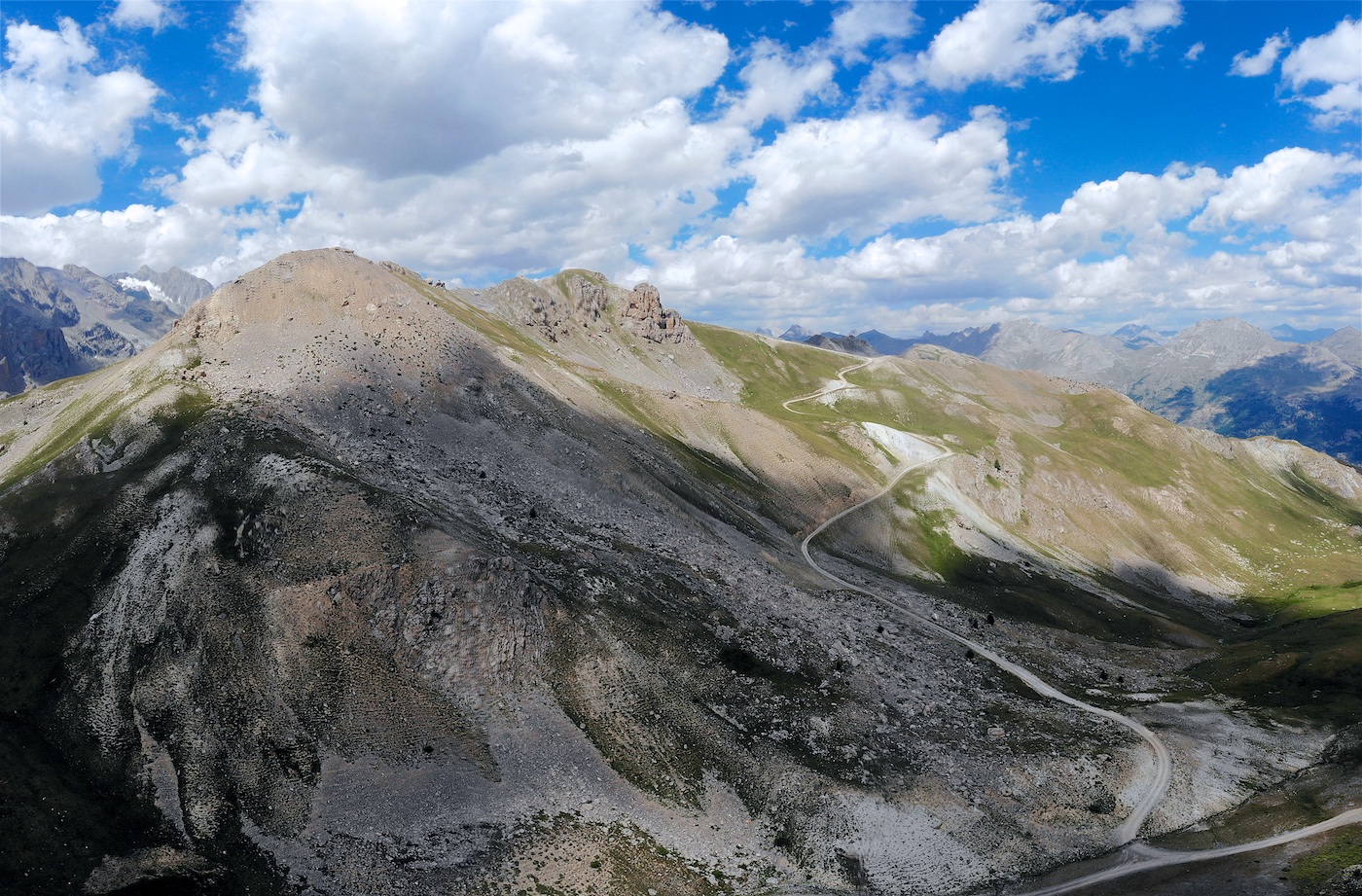 I would cycle up it, though the highest stretches are crazy steep. My original plan had been to turn around at the summit, roughly 2560 metres. But when I reached the top I had another stunning view. I had a close look at a map: in the photo below along the ridge are Col de Fréjus and Col de la Cucumelle, and just beyond, lower on left is Col de l’Eychauda. And that crazy trail in the top right climbs to the summit of the well known La Cucumelle peak. 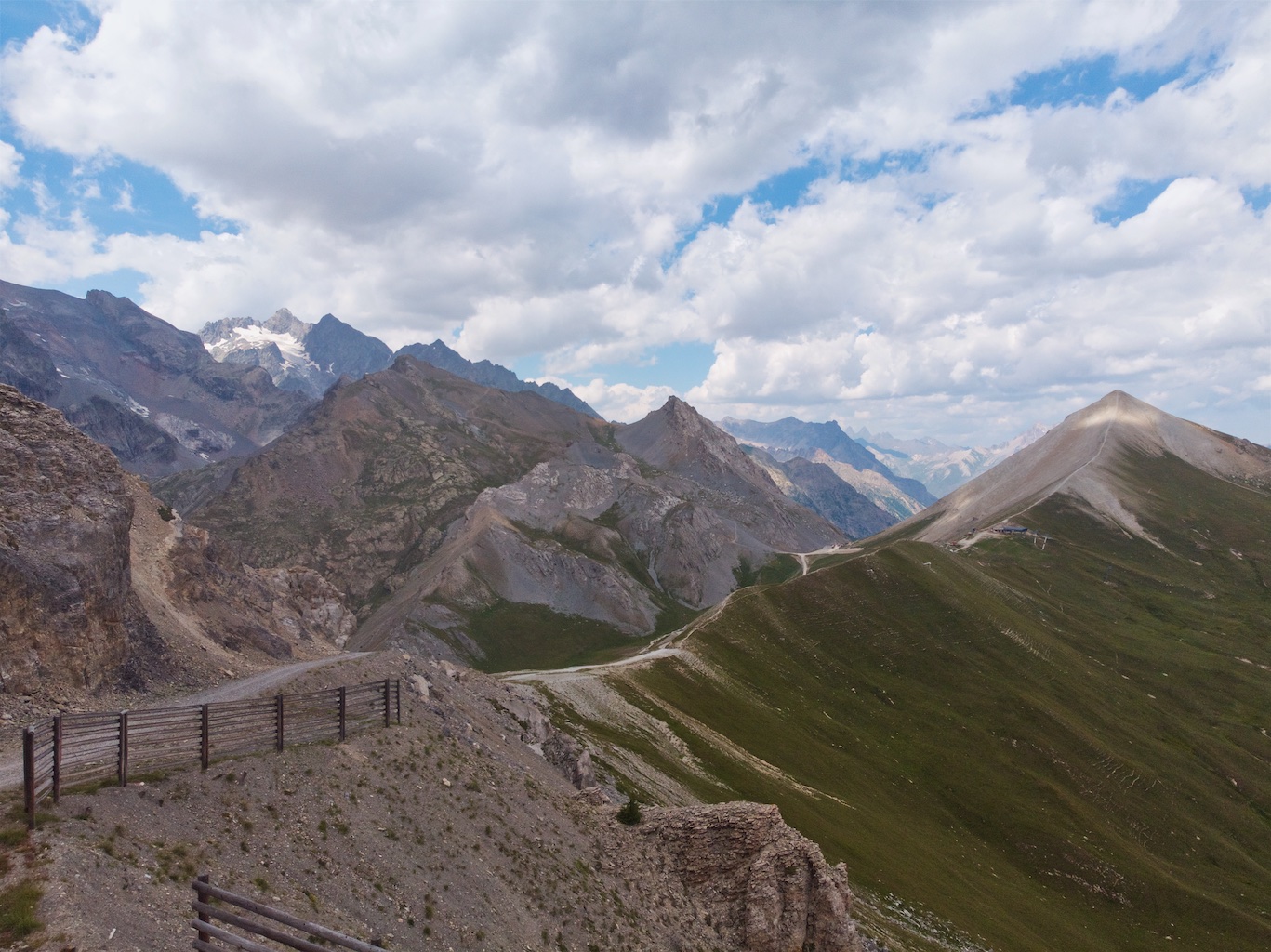 I decided to have a look. First crossing the ridge. Wow: 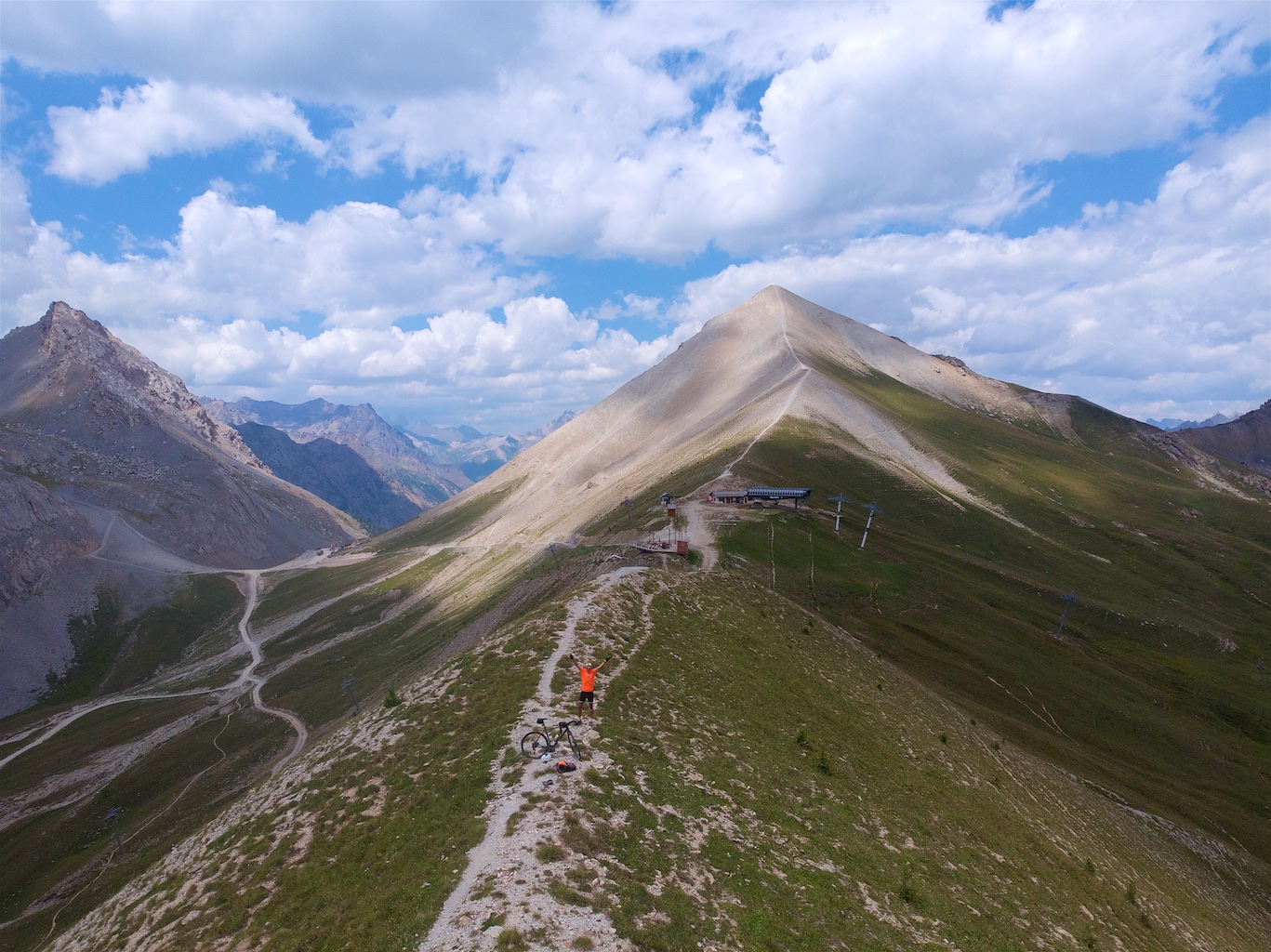 The below photo looks back towards the way I had come:

I continued across the ridge to Col de la Cucumelle and then a short descent to Col de l’Eychauda. Exactly at the col there is another road that heads much higher to Col des Neyzets (2710 metres). It looks crazy steep, but I regret not having a look. You can see the road above up high just to the right: 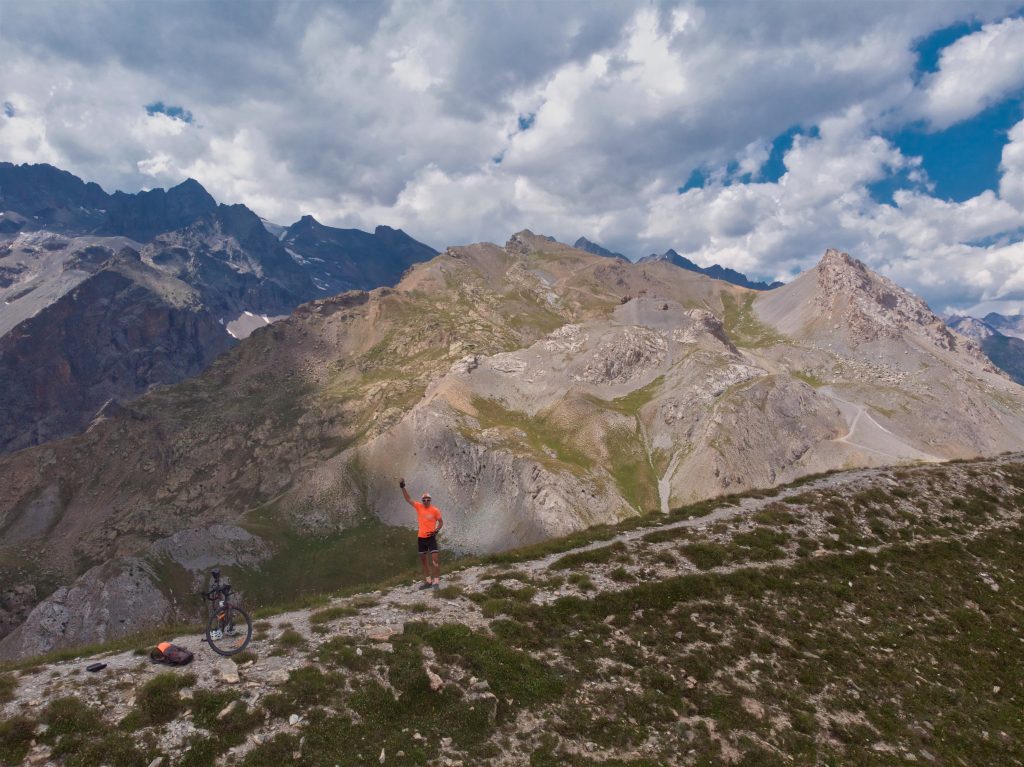 Instead, I began the descent to Monêtier-les-Bains. This is where I really regretted not having a mountain bike. It’s a dusty gravel road, but extremely steep and slippery. Difficult. Eventually, I would reach the valley. I took paved roads, including a long stretch on the main busy road back to the start. But it is easy to map out trails or quieter roads if you prefer. But I was tired, so for once, I chose the fastest, busiest option.

I pedaled straight into the McDonald’s and ordered three Egg McMuffins! This … was … an … adventure. Highly recommended, but all but the very strongest riders should expect some hiking. 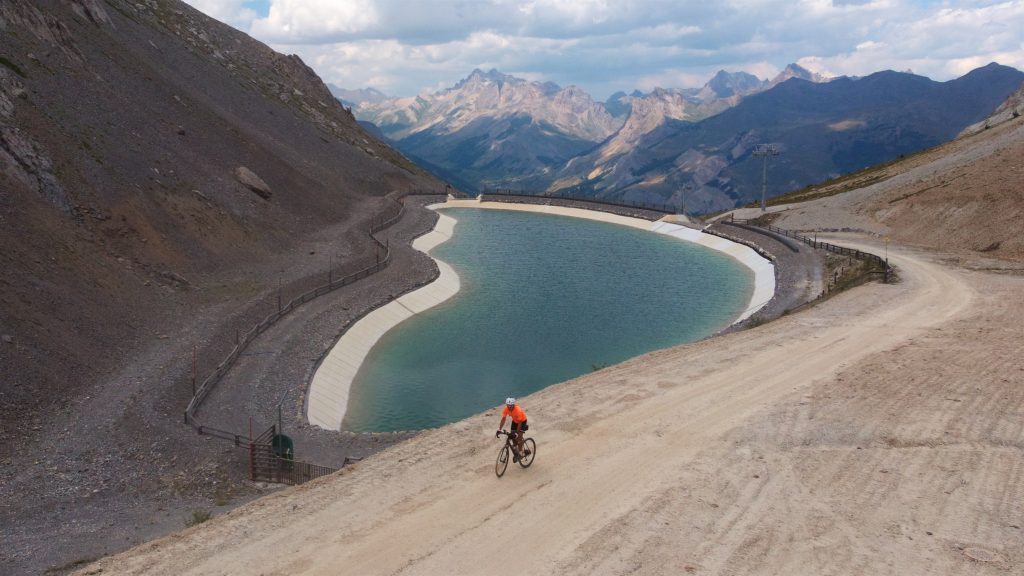