Trending
You are at:Home»Favorites»Colle delle Finestre, Colle dell’Assietta, and Above

This is as good a high Alps gravel road route as I know. Spectacular. But warning, this is challenging. Starting at 500 metres altitude, the route goes to almost 2800 metres with a descent in the middle. And much of this is on slippery, poor quality, gravel roads. Hard work. But rewarding.

I’ll split this post into three parts for clarity:

This is one of the legendary cycling climbs in Italy appearing in the 2005, 2011, and 2015 Giro d’Italia. It’s a beast of a climb, one of the toughest in the Alps. But the grade is steady. It’s almost always either side of 9%. No respites, but few crazy steep ramps either.

Road Art near start of climb

It’s a climb of two parts: First, after a couple of steep kilometres from Susa, the S172 military road begins – 17 kms to the summit. The bottom half is a narrow, but adequately paved surface that hairpins up through shaded woods. At one point there are roughly 30 hairpins in 3 kms. Wow. Just before the paved road ends there is a cliff stretch with views of the valley below. Here, you can either marvel at the views or curse the fact that you are only half way up. 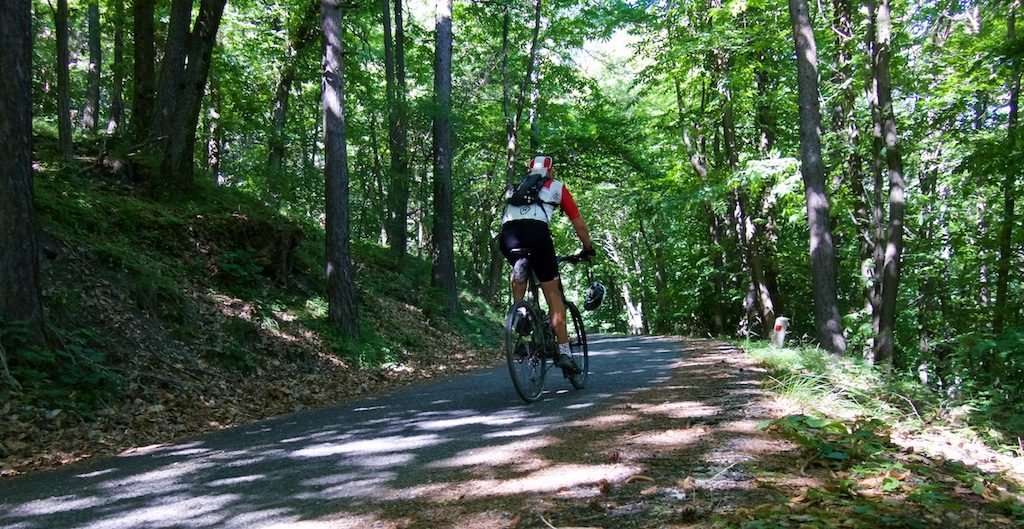 Views of valley below

The top half, the final 8 kilometres, are gravel. The forest gradually thins out. And while there are fewer hairpins, they are far more dramatic. The top few kilometres are fantastic. 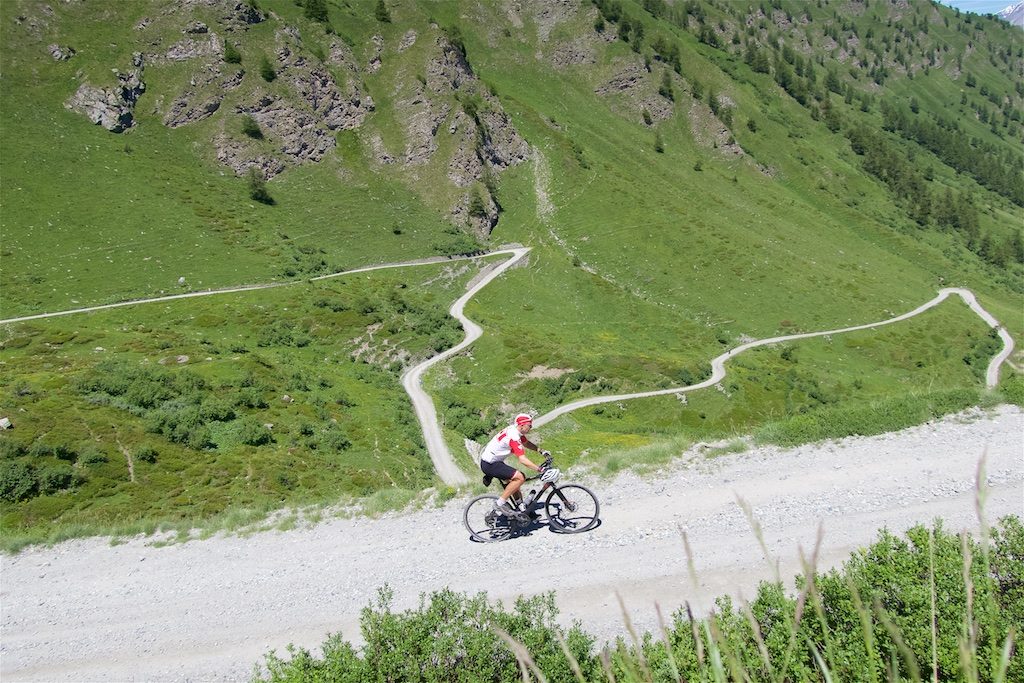 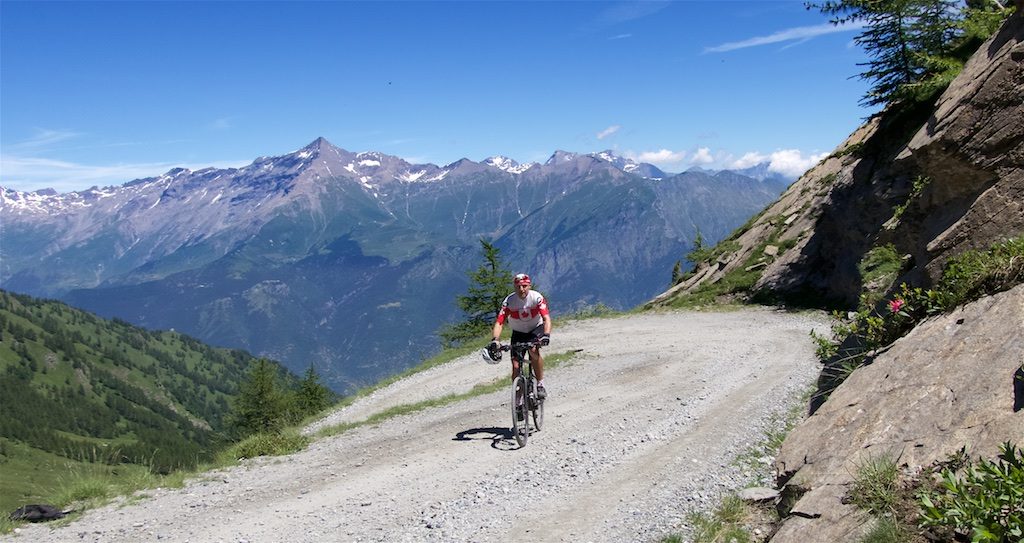 At the col are two Danilo Di Luca steles. The convicted doper was first over Finestre in the 2005 Giro. Just above is also a little statue garden of “9 coli più epici” (9 most epic cols) of cycling, in addition to Finestre (Mortirolo, Stelvio, Fauniera, Gavia, Tourmalet, Galibier, Izoard, Ventoux, and Alpe d’Huez). Higher, dominating the Col is a 19th century Fort. I’d get a better view from above much later. 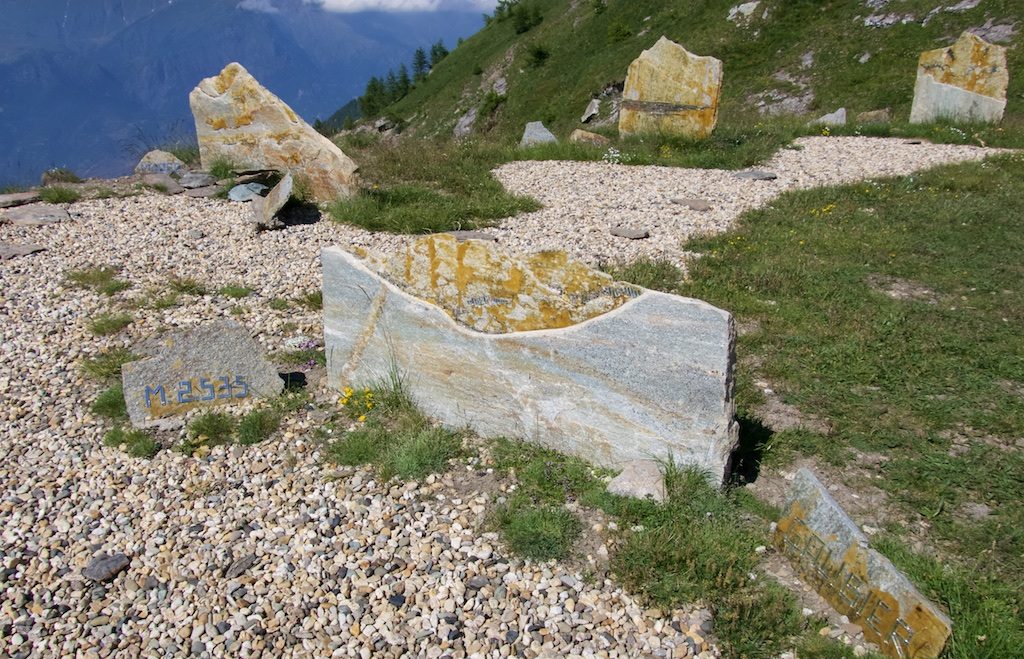 La Strada dell’Assietta is one of the most spectacular high altitude roads in the world. More than 30 kms long, almost entirely well above 2000 metres. This old military road is unpaved, gravel, and at times quite rough. Along its length are all sorts of forts, barracks, etc. Most built in the late 1800s. The official web site is here. 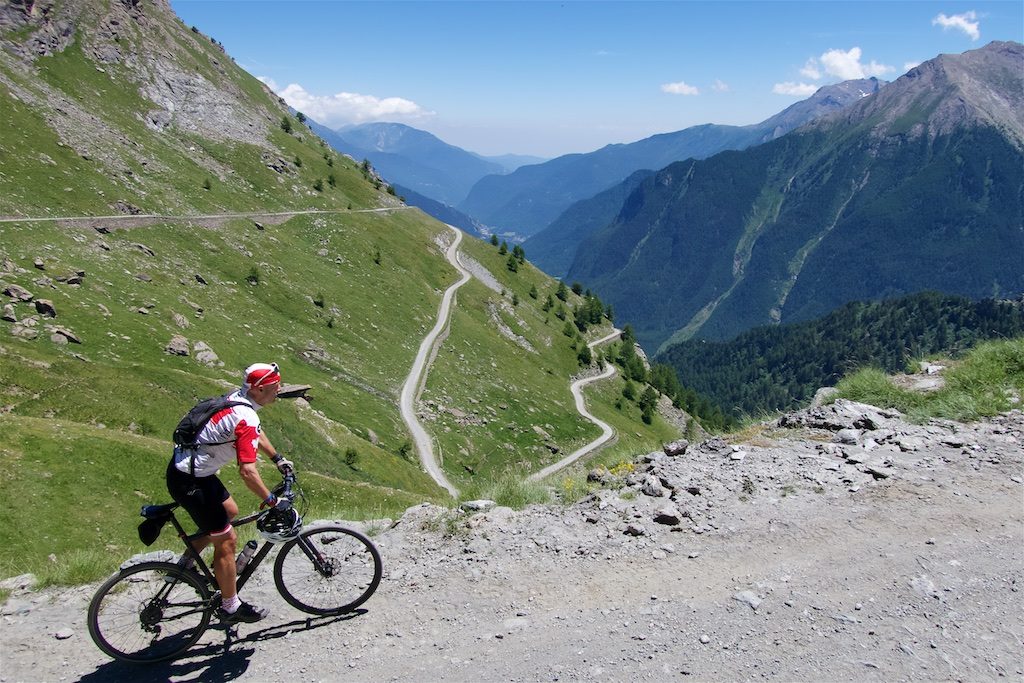 From Colle delle Finestre, I descended the paved main road for a few kilometres. Then at 1900 metres or so, near Pian dell’Alpe, I turned into the entrance – and low point – of the Strada dell’Assietta. I would only ride 13 kilometres of Assietta today – see here for a ride the entire length.

At the summit of Finestre is a fountain. And just before the start of Assietta is a farm/restaurant. These are the ONLY two places to get water/food on this route.

This road is rougher than the unpaved stretch of Finestre. Although always lightly trafficked, in summer, on Wednesday’s and Saturday’s it is bike-only – very nice. This avoids the occasional motorcycle swarm, or convoy of tour-company Range-Rovers. At one point, on a cliff stretch, I met a bull grazing on its own. Yikes. Fortunately, he seemed uninterested in me, and I slowly passed. The road traverses for a while then turns up with some superb hairpins, before reaching Colle dell’Assietta at 2472 metres.

Exactly at Colle dell’Assietta is a turn-off to the Strada Militare Gran Serin – Colle Finestre. This is always closed to motorised traffic. In fact, I would call it a very old road that is times more like a wide hiking trail. Most cyclists ignore it. What a mistake, it’s jaw-dropping. Roughly 14 kilometres long, to begin it climbs, twists, descends, passing Fort Serin and various other military ruins. It then climbs to nearly 2800 metres before a superb descent back down to Colle delle Finestre (2178m).

It’s even rougher than Assietta. I walked a couple of stretches that weren’t even that steep as I kept slipping – but in general it’s entirely ride-able. The road is endlessly interesting (and deserted). 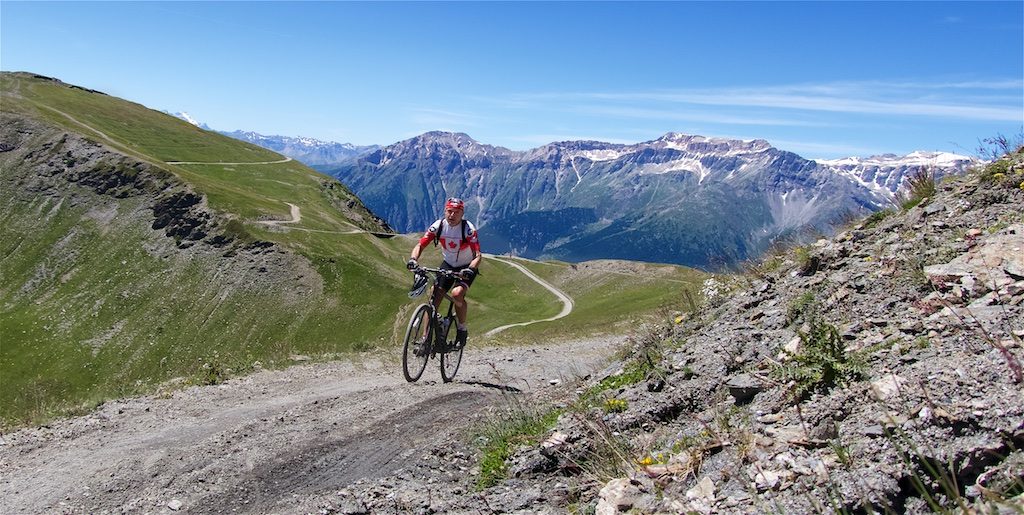 Heading higher. Colle dell’Assietta behind me. 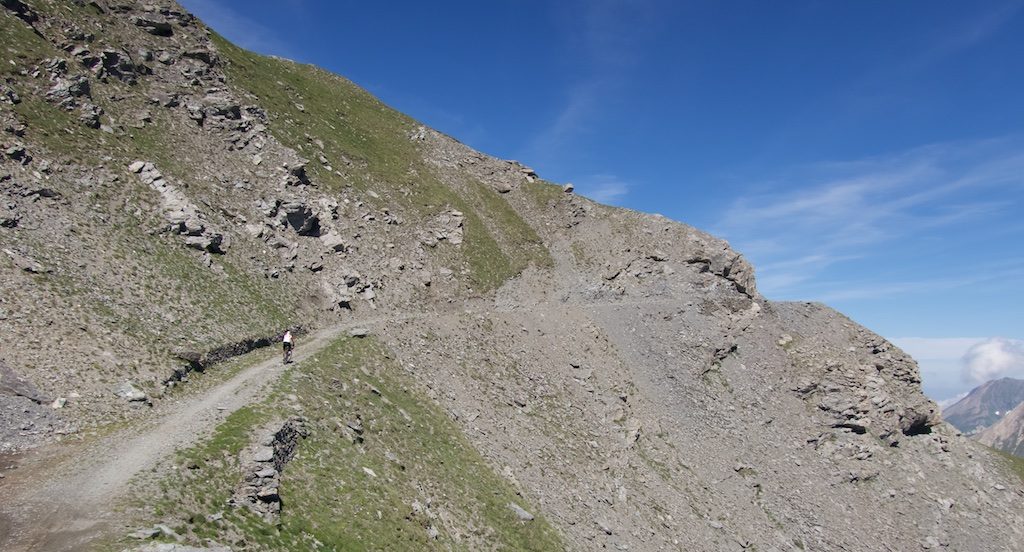 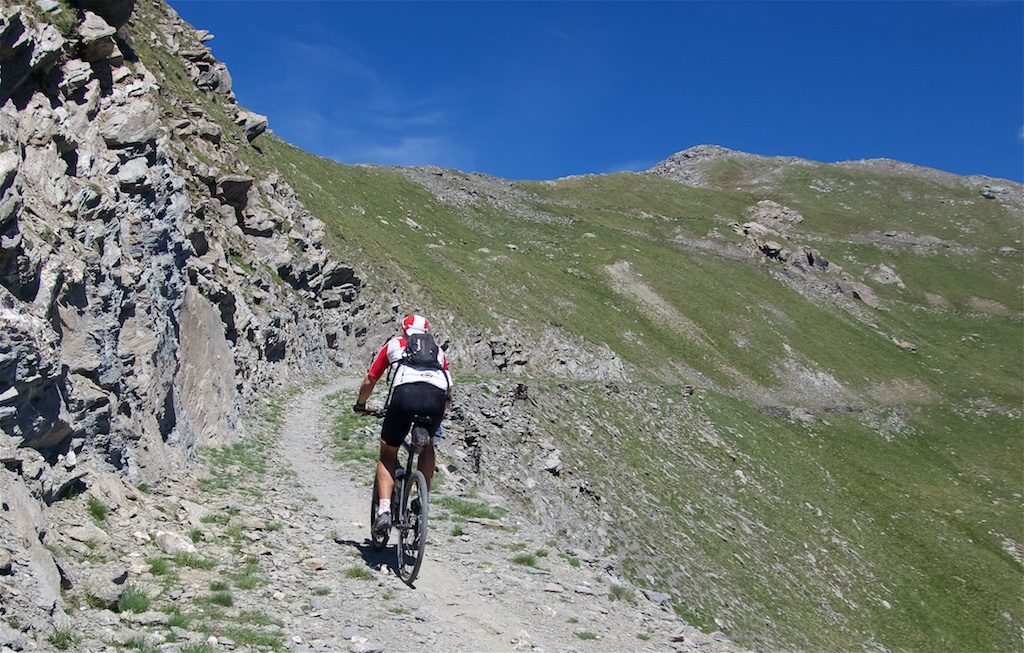 Colle delle Finestre in distance below

Fort delle Finestre above the colle

From here, I simply descended Colle delle Finestre back to Susa.

This route is truly special. You know it’s a great route when a legendary climb Like Colle delle Finestre might be the least interesting part of the ride. Highly recommended.