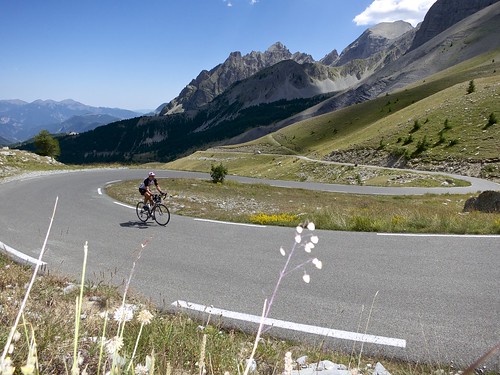 From Barcelonnette, I started with the Col de la Cayolle. Not the hardest climb, but almost 30 kms long and a scenic, easy start through a lovely narrow gorge to warm up the legs.

It gets a little steeper for the last few kilometres as one climbs out of the gorge. This was the first time I’d seen the other side – wow! Amazing hairpins and cliff roads, I didn’t get any good photos, but a real highlight of the loop.

There is a drinks chalet one kilometre from the summit of Cayolle. If you are thirsty stop there as there is nothing at the summit or until well down the descent.

After a super fun descent I turned right to climb Col des Champs. Note, early in the climb the road splits – both ways go to the Col – but turn right following “Colmar via Col des Champs” for the “classic” route.

The early slopes are nothing special, but once the road gets above the tree-line it’s a superb, hairpinned route. 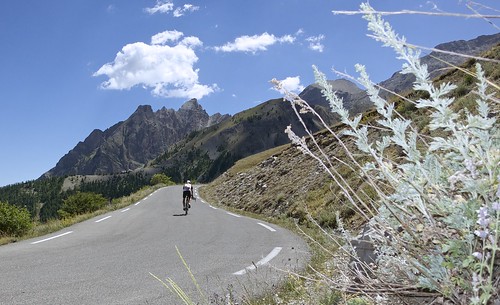 Again, if you want a drink, the last restaurant is roughly 9 kms from summit.

The descent is in a different French department, and the surface is awful. Very bumpy. I should have climbed this side.

Which is the best direction for this loop? Without a doubt, counter-clockwise – opposite of my choice. This climbs the more beautiful side of Allos, the bumpier side of Champs, and the cliff-road side of Cayolle. Next time 🙂

The south side of Col d’Allos starts out very easily, and has a little traffic as the road approaches the ski station of Allos. The fun part of this side is the last 5kms above the final ski-village. I had a dog follow me up for the first 4 kms – which was a little alarming but he seemed happy.

See little pic of yellow sign above – The top part of Allos is closed to cars every friday morning in the summer – nice. 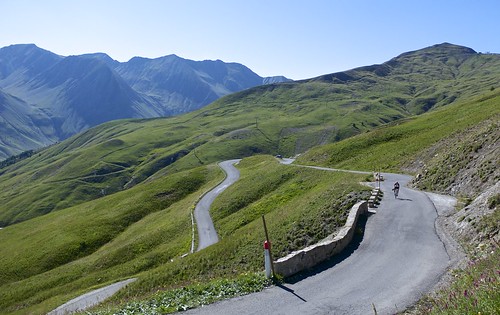 I had a beer at the top and then thoroughly enjoyed the amazing cliff-road descent into Barcelonnette. I love the north side of Allos – details of climb here.

This loop was hard work for me, but so it was so rewarding to complete it. Some time in the future I’ll have to try and survive it again in the opposite direction.