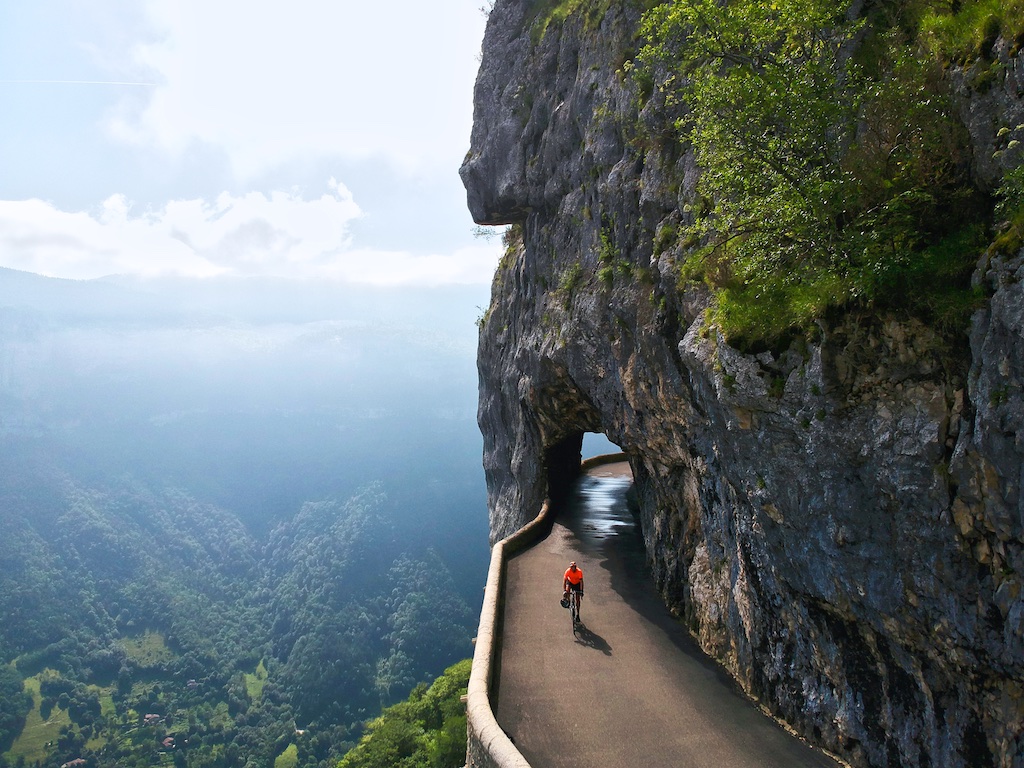 The Vercors Massif, to the south-west of Grenoble, rarely disappoints. I’ve called it the most under-rated cycling region in the Alps. Not the highest cols, but it’s full of quiet, jaw-dropping gorge and cliff roads.

See here for another favourite ride, and here for a longer list of Vercors rides.

Combe Laval is a reculée (steephead valley), a deep, narrow, flat-bottomed valley with an abrupt ending. In the 1890’s a cliff road was built up to and along the top edge of this valley. The “fun” stretch is the last two or three kilometres of the climb to Col de la Machine. 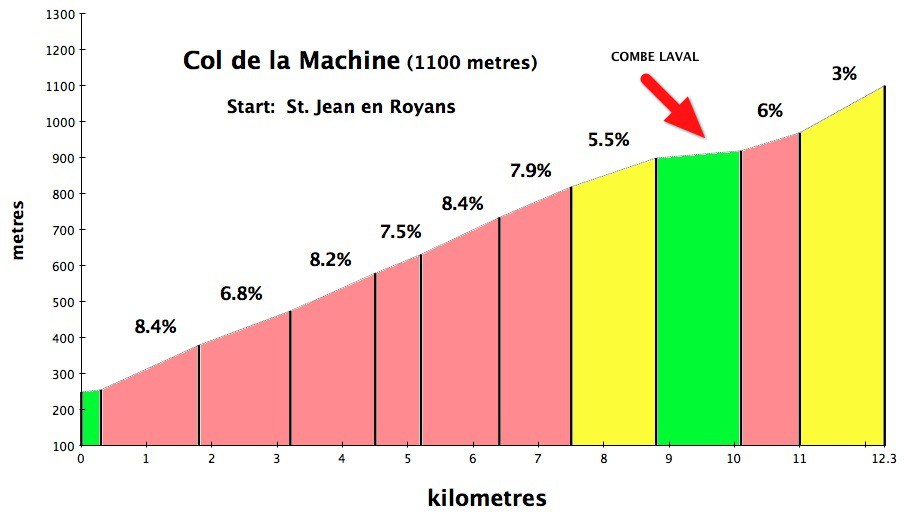 This ride crosses 6 cols, see map below. The first is Col Gaudissart just before the entrance into Combe Laval. Until here, it’s been a pleasant, quiet, forested climb. Suddenly the route turns a corner and this is the view: 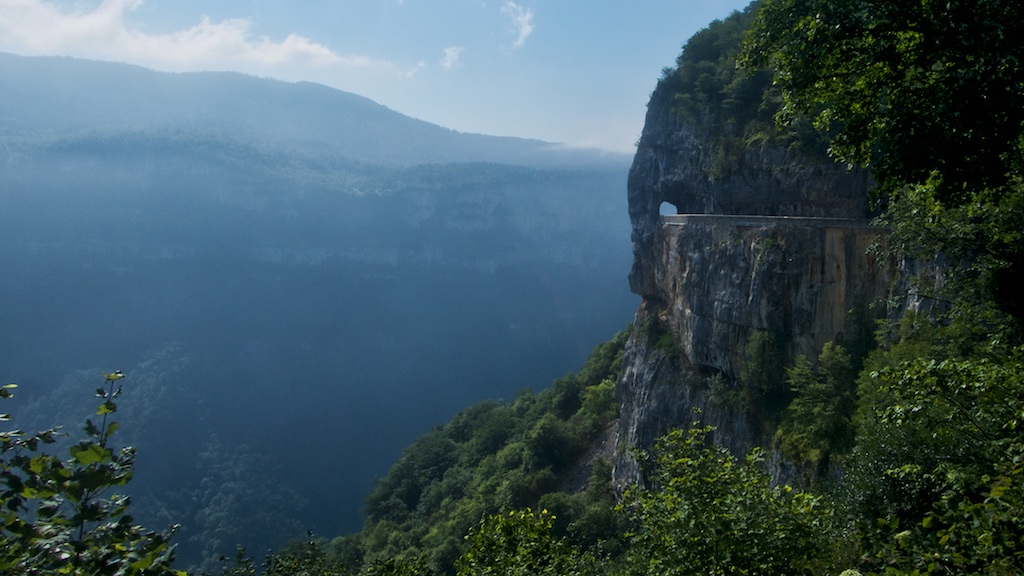 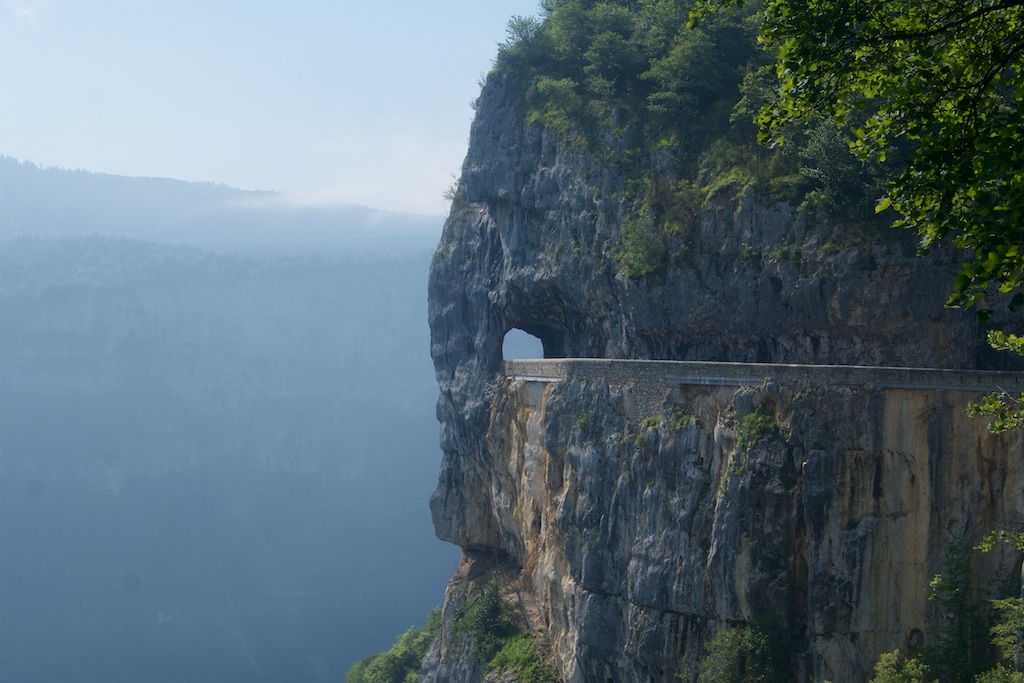 I am nervous about heights sometimes. I had my drone with me but was struggling trying to set-up photos standing on the cliff edge of this road. It’s clearly well built, but yikes, what a place! It only lasts a couple of kilometres, but it’s crazy fun. 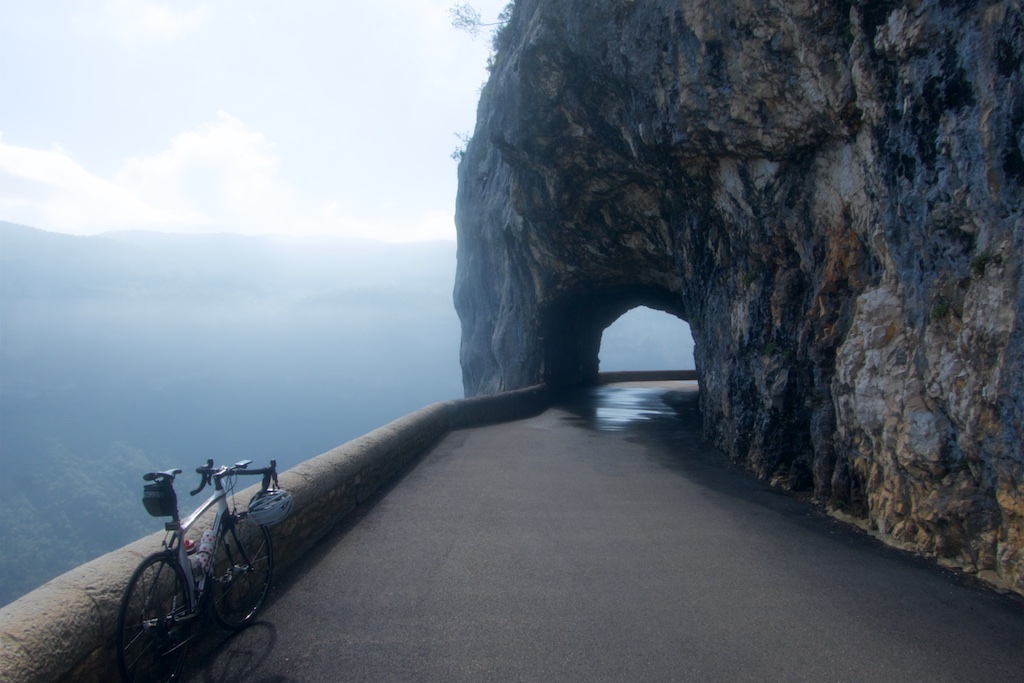 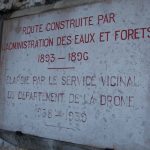 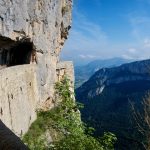 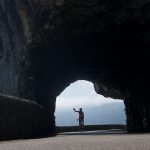 not the scariest tunnel 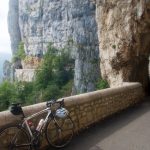 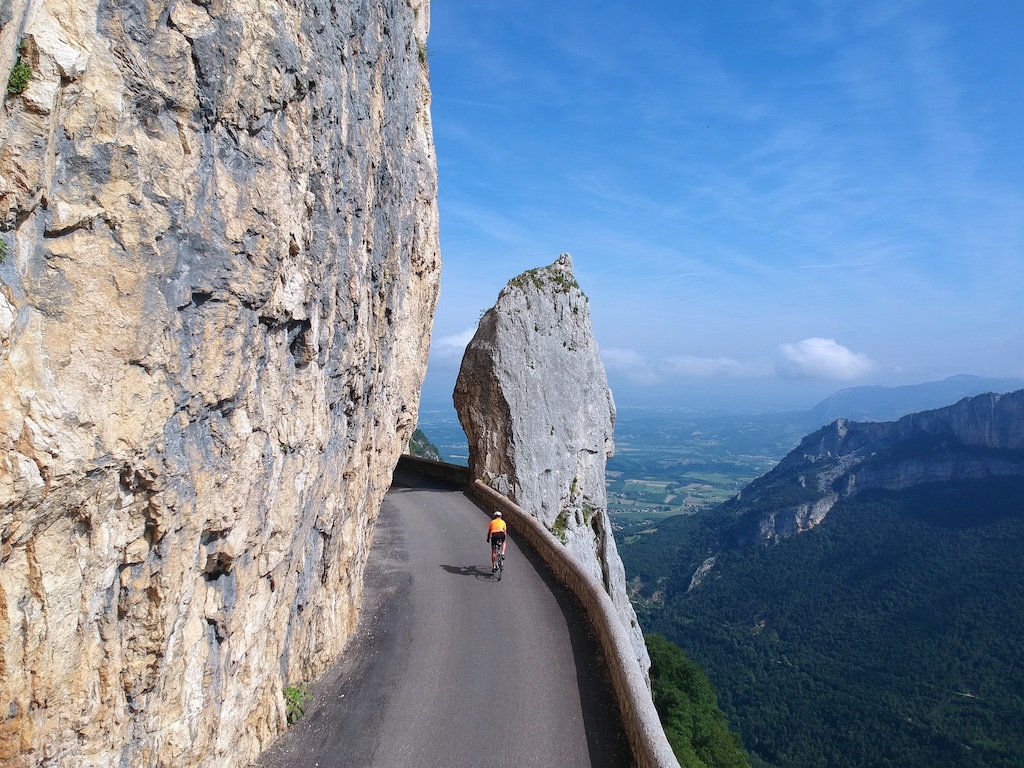 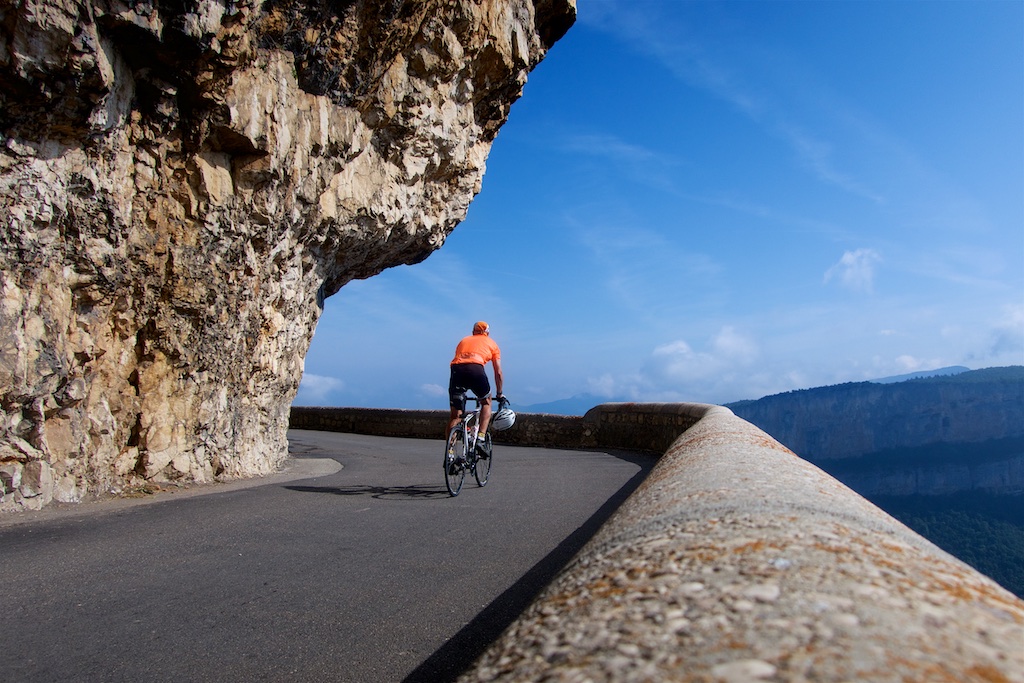 Risking my camera’s life above 🙂 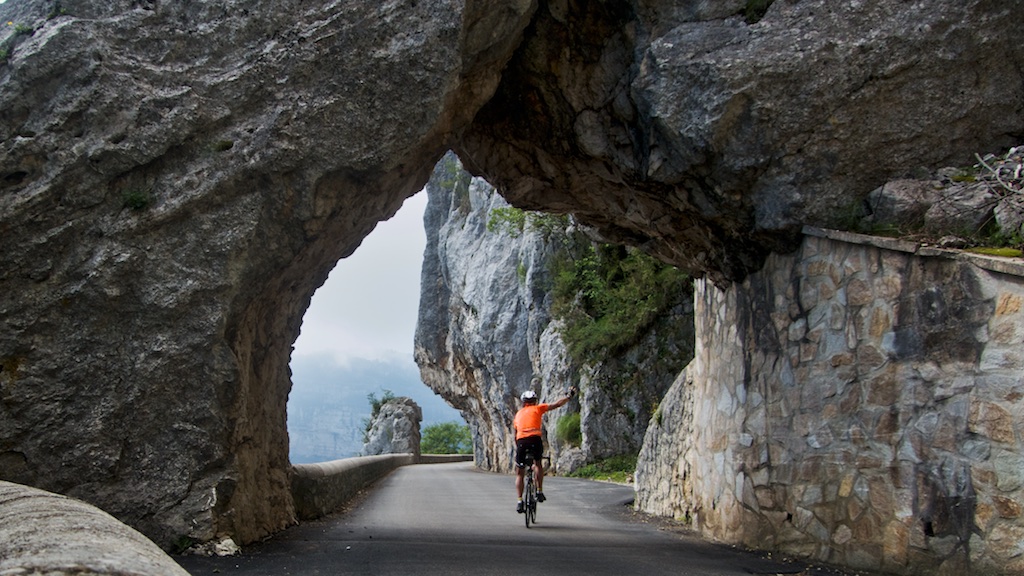 This arch is exactly on the 45th parallel. 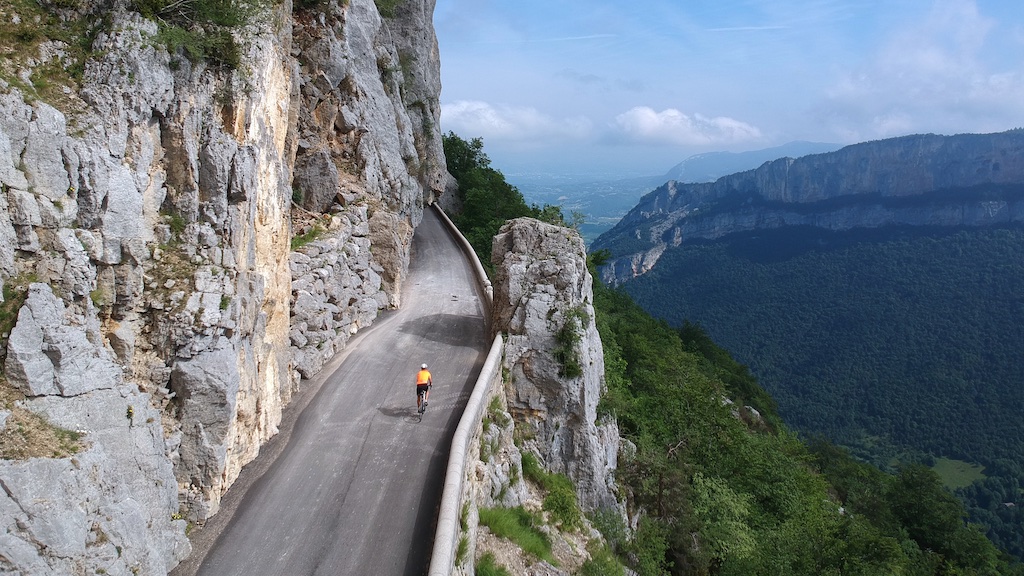 After the cliff road is Col de la Machine. The road splits here. Either direction works. Here’s an old ride where I went left, to Col de Carri, and down through a beautiful gorge. But today I went right, heading for Col de la Bataille.

The Vercors was a major base for the Maquis (French Resistance) in World War 2, and one always sees lots of monuments and memorials. 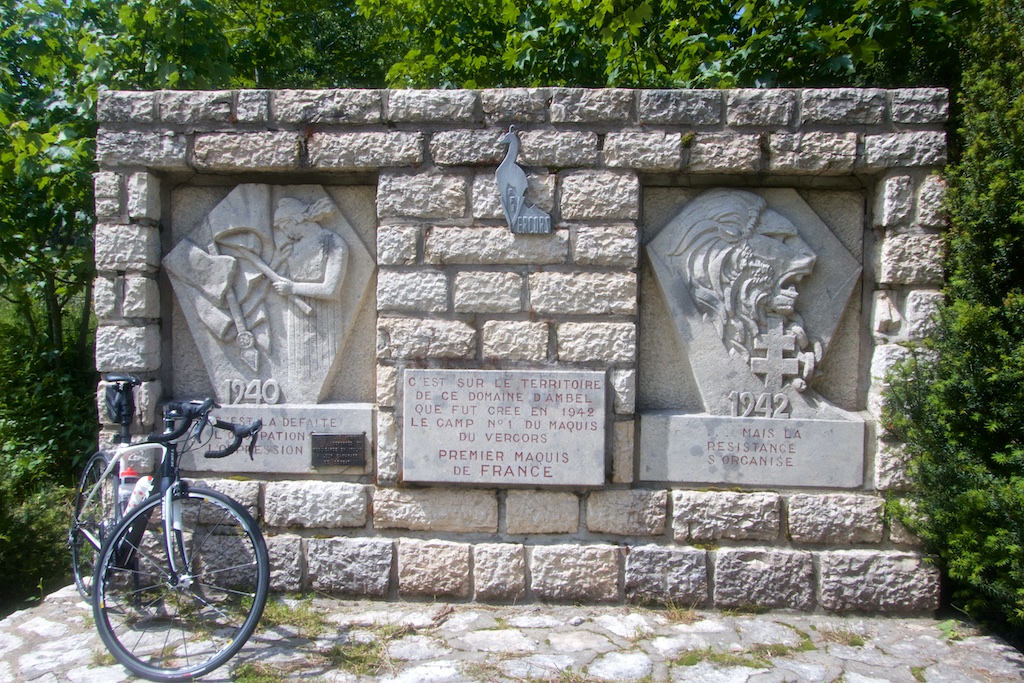 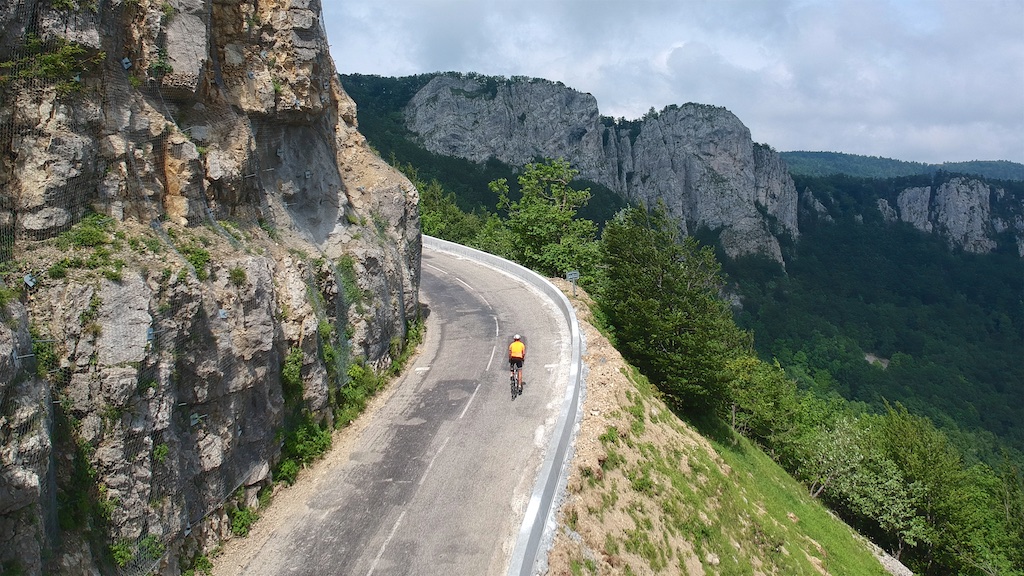 The Col itself is beautiful, with fantastic views in every direction.

There are endless route ideas here and as I descended I passed an intersection with Col des Limouches in one direction and Col de Tourniol in another. But I kept it simple and descended all the way to the start down a beautiful gorge road. Note, halfway down it passes the turn up to the Relais de Musan – a super climb to a telecommunication tower and fun cliff views – see this old ride.

I’ve been working on a longer post mapping out a bunch of Vercors rides, both my routes and some official routes that I’ll hopefully publish soon. For now, I’ll just highly recommend cyclo-tourists adding the Vercors Massif to any alpine plans.

This is a very good Vercors loop that is made extra special with the truly jaw-dropping cliff road at Combe Laval.