Why bring a gravel bike on a great paved climb? Because sometimes the real fun starts when the paved road ends. But if you only road bike keep reading: this post includes a very worthwhile climb for you. 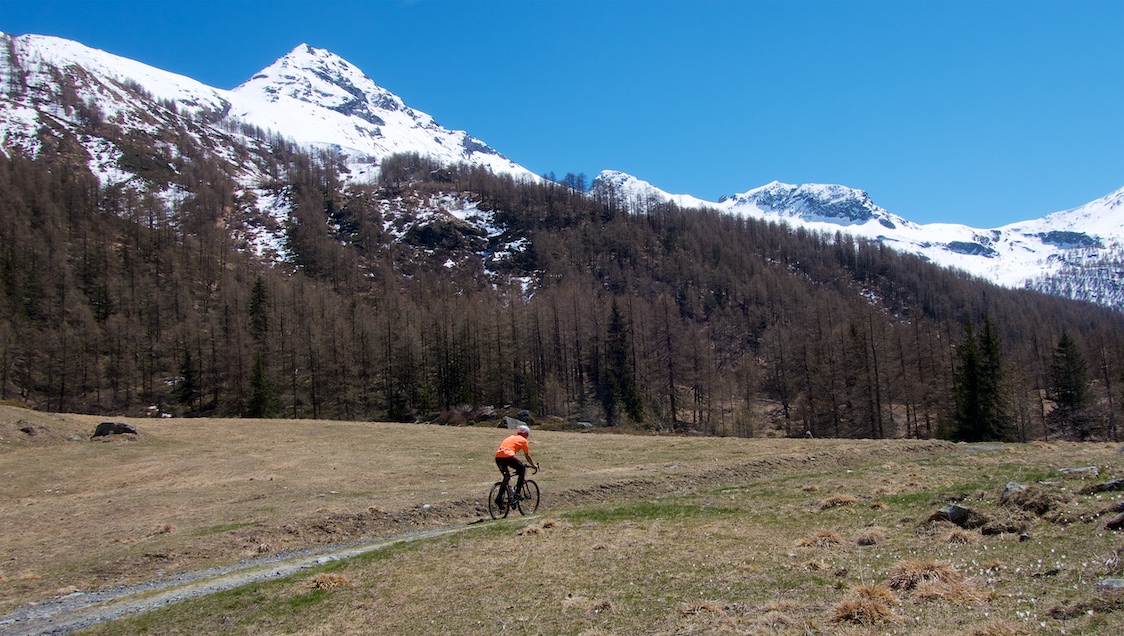 My simple route planning strategy: pull out a map of the Val d’Aosta region and look for a cluster of unfamous hairpins. I knew the road to Druges (1588 metres) was paved but I didn’t know the route beyond. So I rode some wider tires to maintain flexibility.

But I am getting ahead of myself. Note the elevation profile in the map below. The first and last 15 kilometres of this route are flat, on a dedicated bike path well away from roads. It runs along the Doria Baltea river, a branch of the Po running through the main Aosta valley. In a region where the lower roads are often quite crowded, this is a great find: 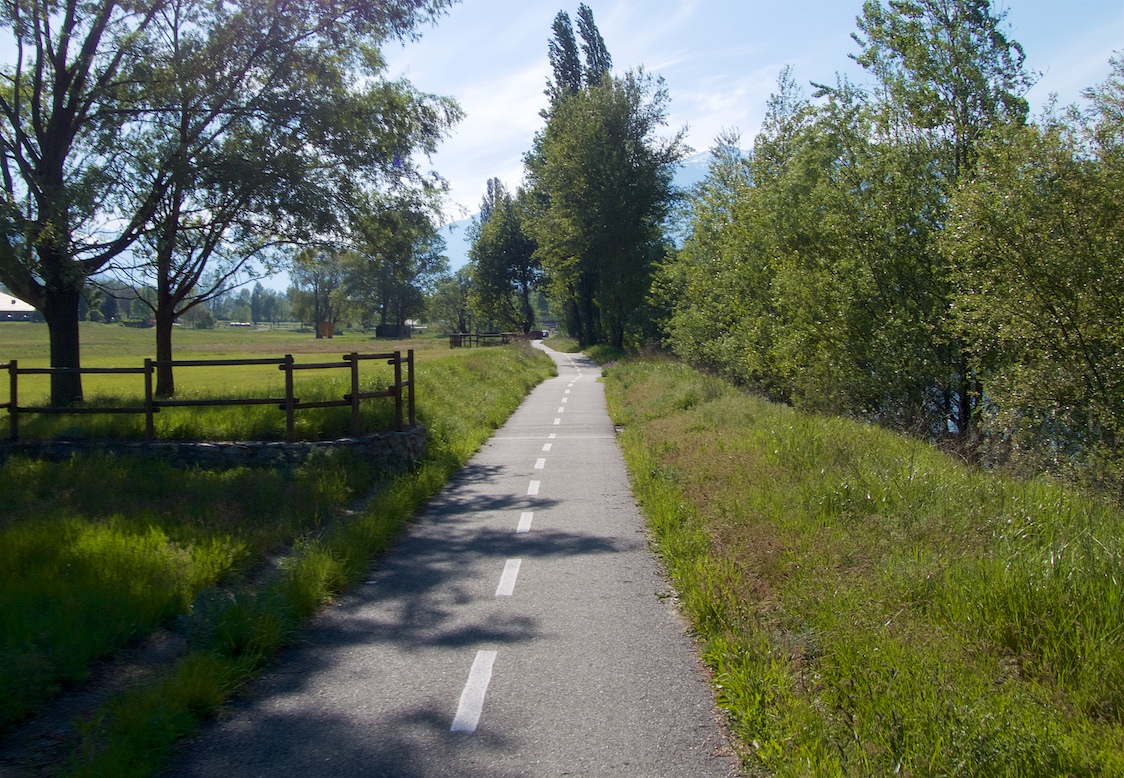 I was heading to the start of the paved climb and ran into a closed road, so I took a higher traverse road.

Warning, just before the start of kilometre 24, I made a 1 kilometre traverse on a fairly wild unpaved cliff road. A road bike could easily bypass this by taking the hairpins below.

The profile is only for the paved climb. It’s steep, hairpinning up through a forest. Very quiet, I never saw a car. The summit is a tiny village with a ski slope. 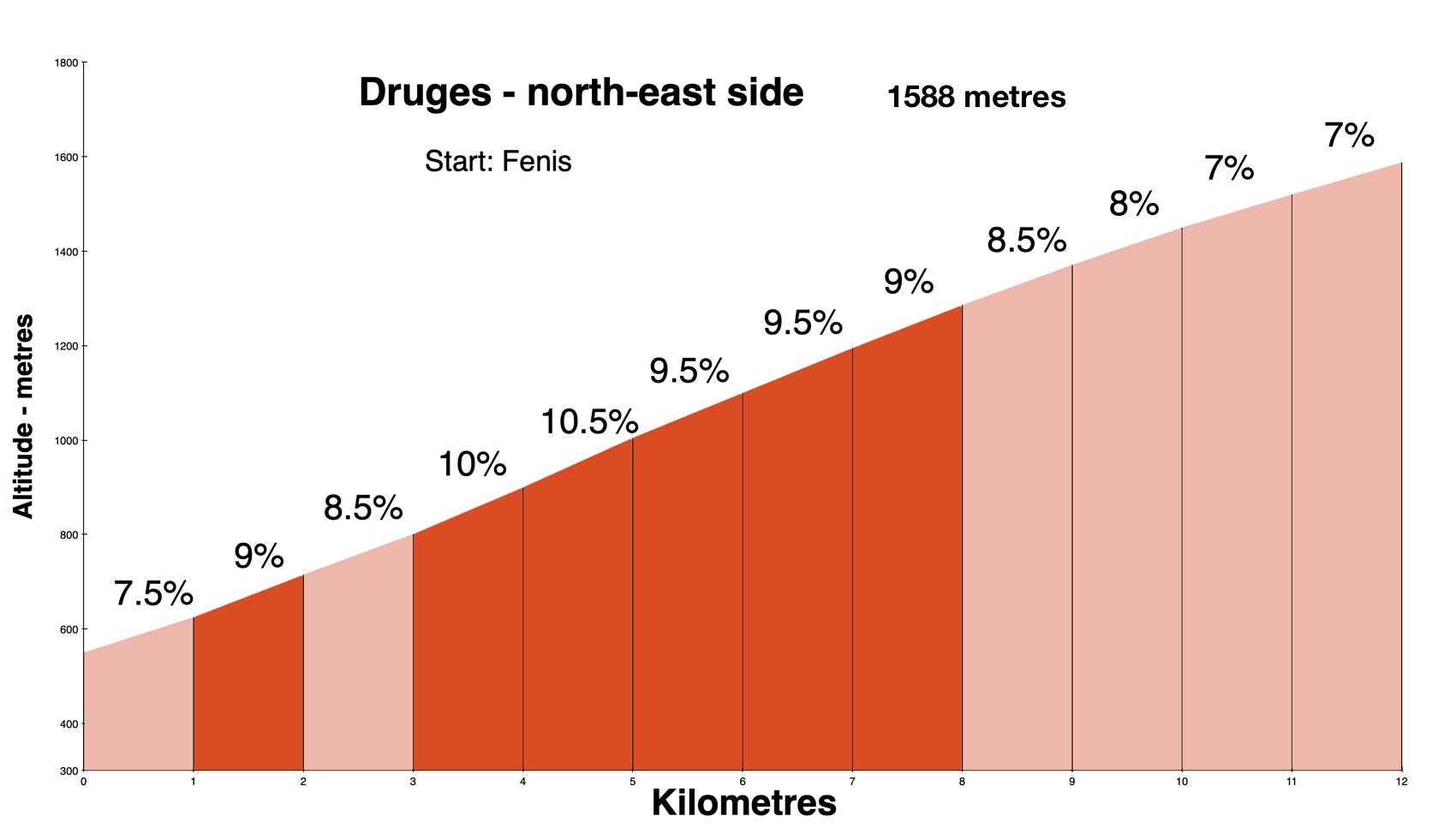 There are small cycling kilometre signs along the way

Plenty of mountains views throughout, especially higher up as the forest thins: 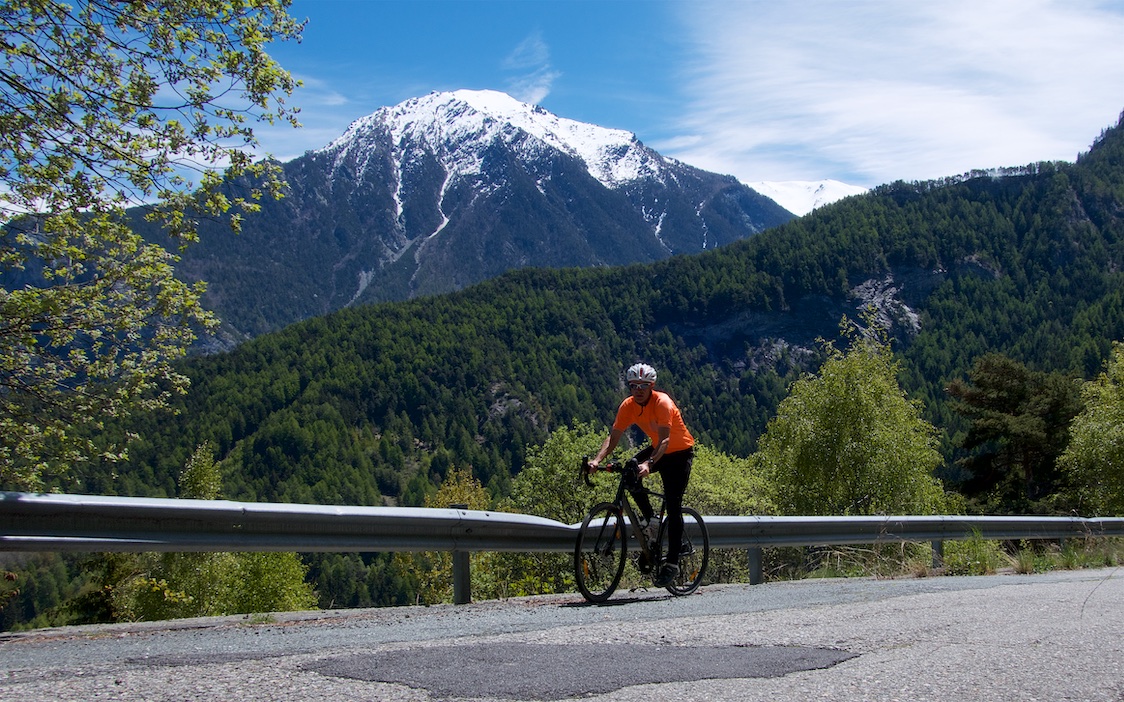 The descent from Druges shown on the map is also paved. But the entire there/back extension above Druges follows a dirt/gravel road. All the way to Lago Layet (2273 metres). . Woohoo!

See here for a map detailing more paved and unpaved climbs in Aosta and Piemonte, Italy

From here on I had no idea what to expect. But early views were promising: 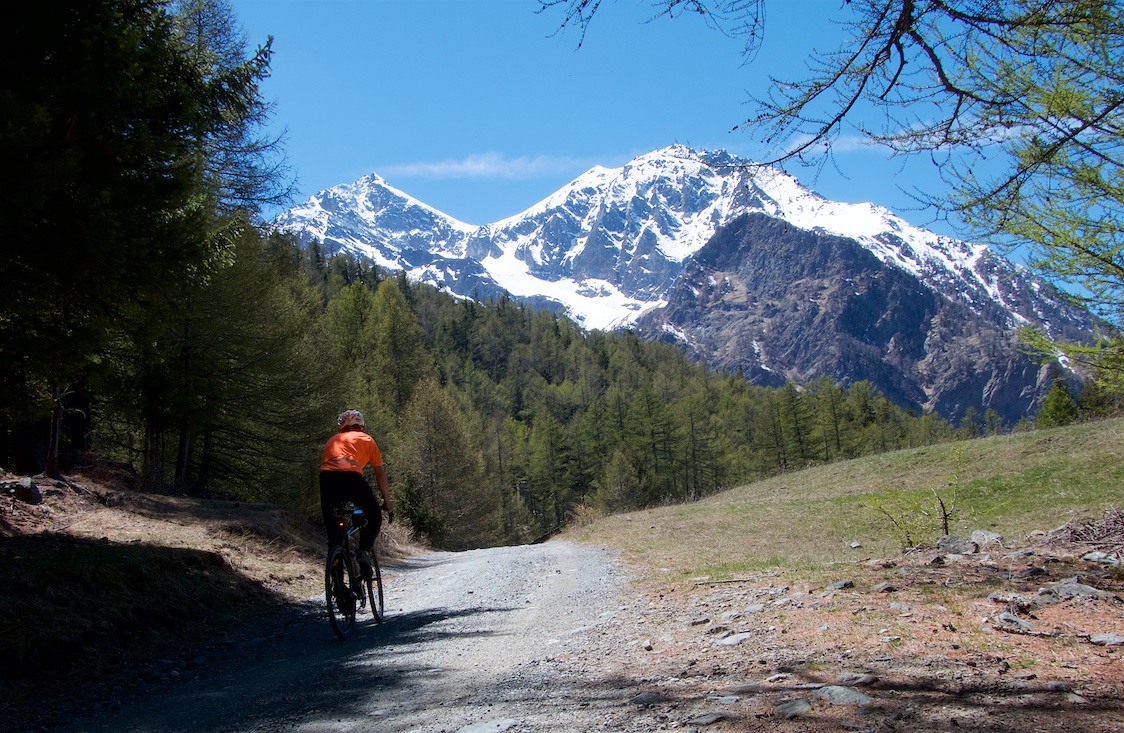 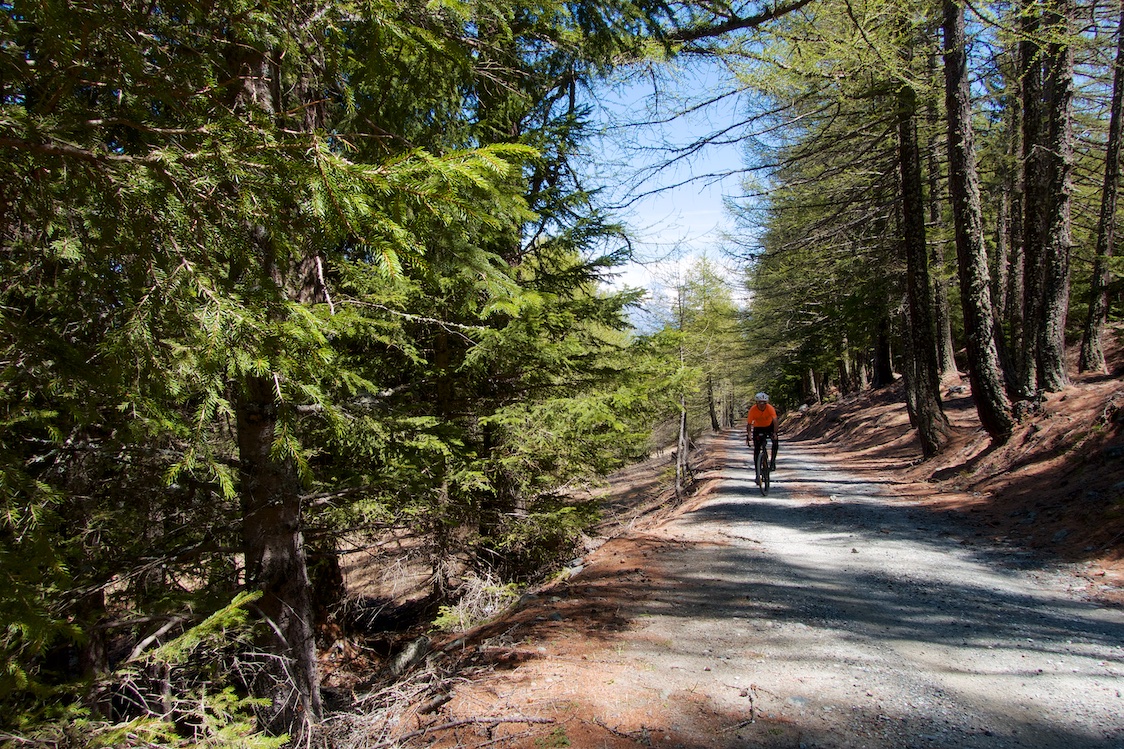 The route curved around a big mountain along a fairly amazing cliff stretch before entering a “secret” high alpine valley. 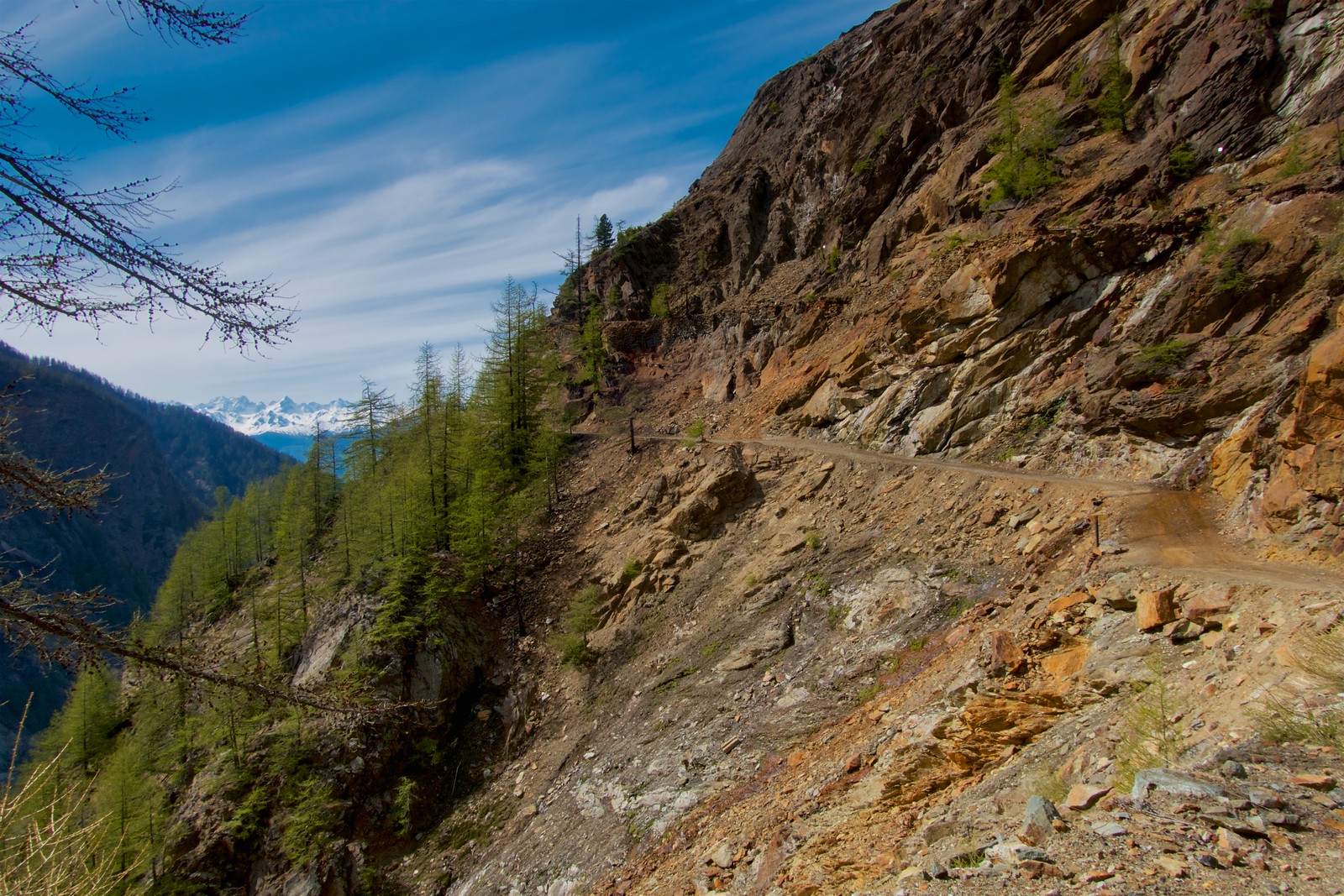 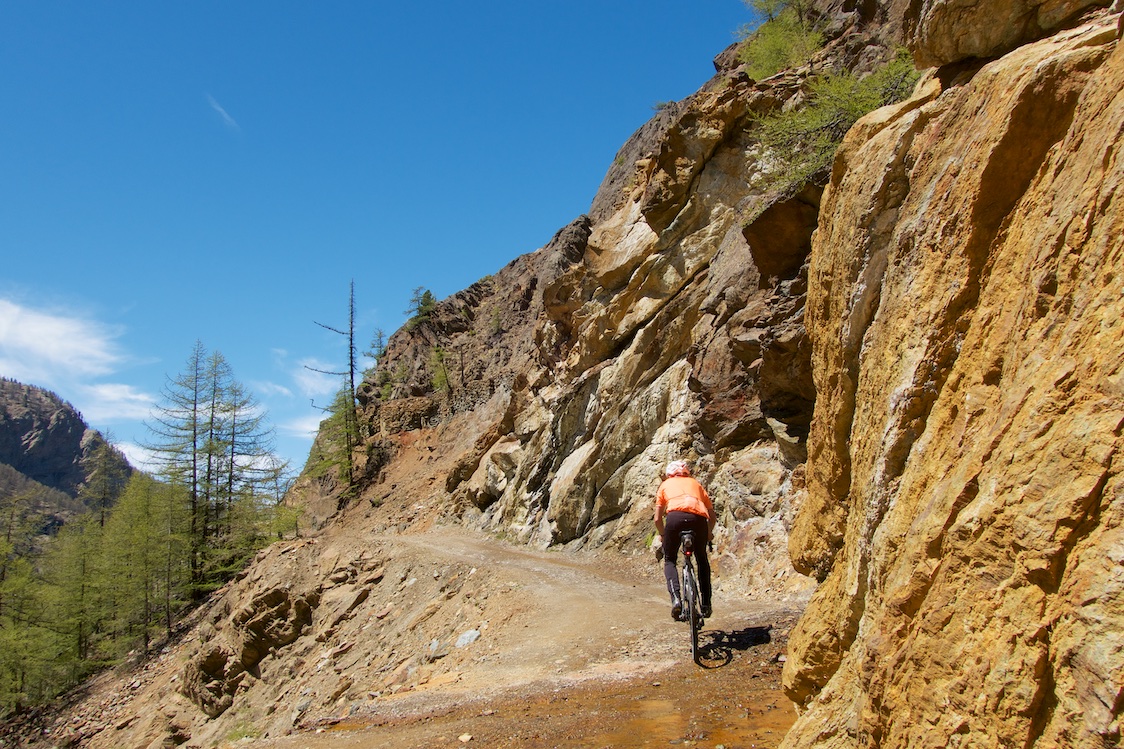 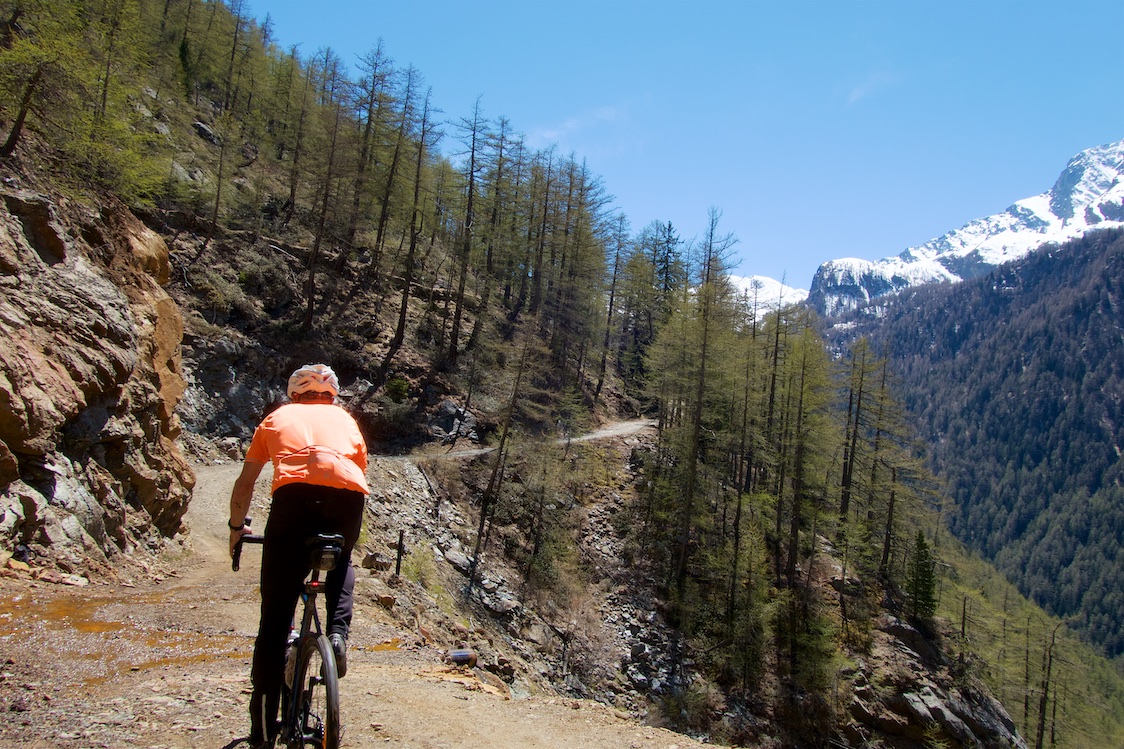 The road was crazy steep and slippery at times, but mostly rideable. 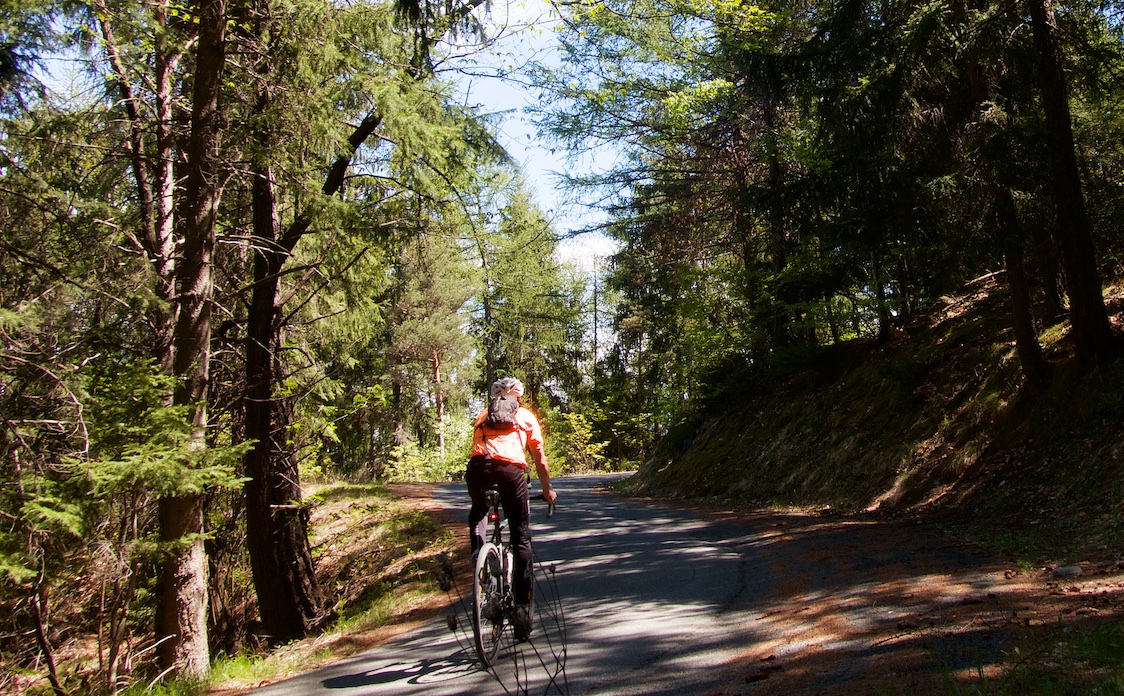 I reached the end of a three-sided amphitheatre valley and the snow line. But my map showed the road weaving higher up to an Alipine lake. I LOVE ALPINE LAKES. So I kept going. But I decided to leave my bike at roughly 2050 metres as the snow got heavier. I hadn’t seen a person since the gravel started so I didn’t hide my bike. 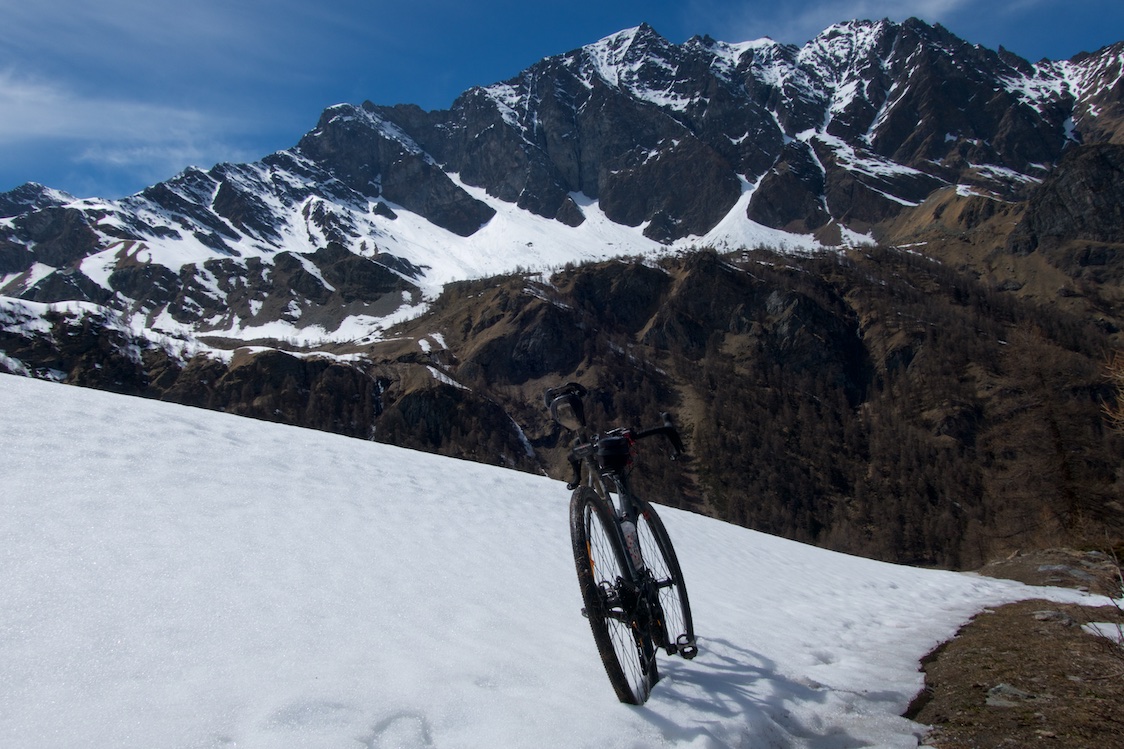 please be here when I return

My plan was to keep going as long as it seemed safe. Occasionally the road would reappear with little snow, and occasionally I’d be sinking the length of my legs. I would have turned around a few times but there was a set of old tracks. In fact two. An intrepid hiker had brought his dog. So I followed them. The occasional screech of a startled marmotte (not used to humans for several months) made me jump, but they were always too quick for a photo. .

It took some time to do the final kilometre and a half, but in summer I think it would be mostly rideable (some parts are crazy steep). A few photos: 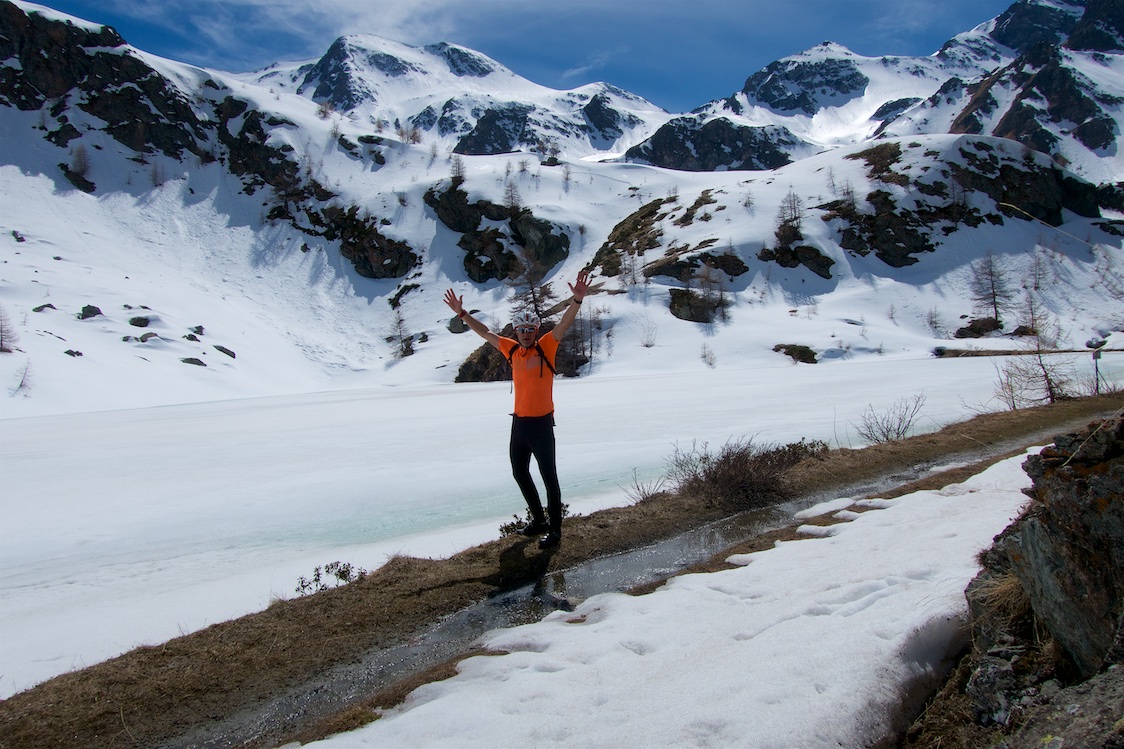 My feet were soaked and quite cold. So I got a move on hiking back to my bike. If you look closely at my gps track you’ll see where I initially went right by it missing that stretch of the road. Oops.

There is a well marked alternate unpaved route down a few kilometres along the way back, but the gorge it went through looked crazy steep and I worried I’d be walking a long way, so I just headed towards Druges. 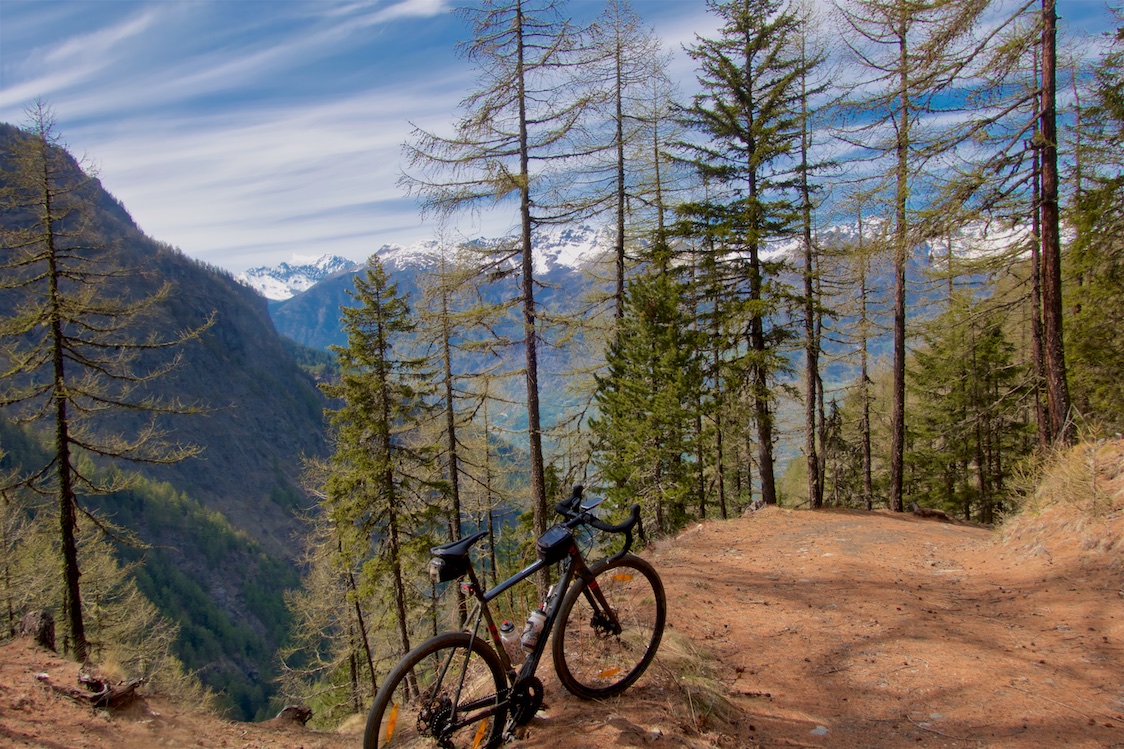 A leftward trails looked too crazy.

The descent of the western paved side from Druges is rougher than the way I’d climbed but deserted. I took my time then rejoined the bike path for a scenic, car-free 15 kilometres back to the start: 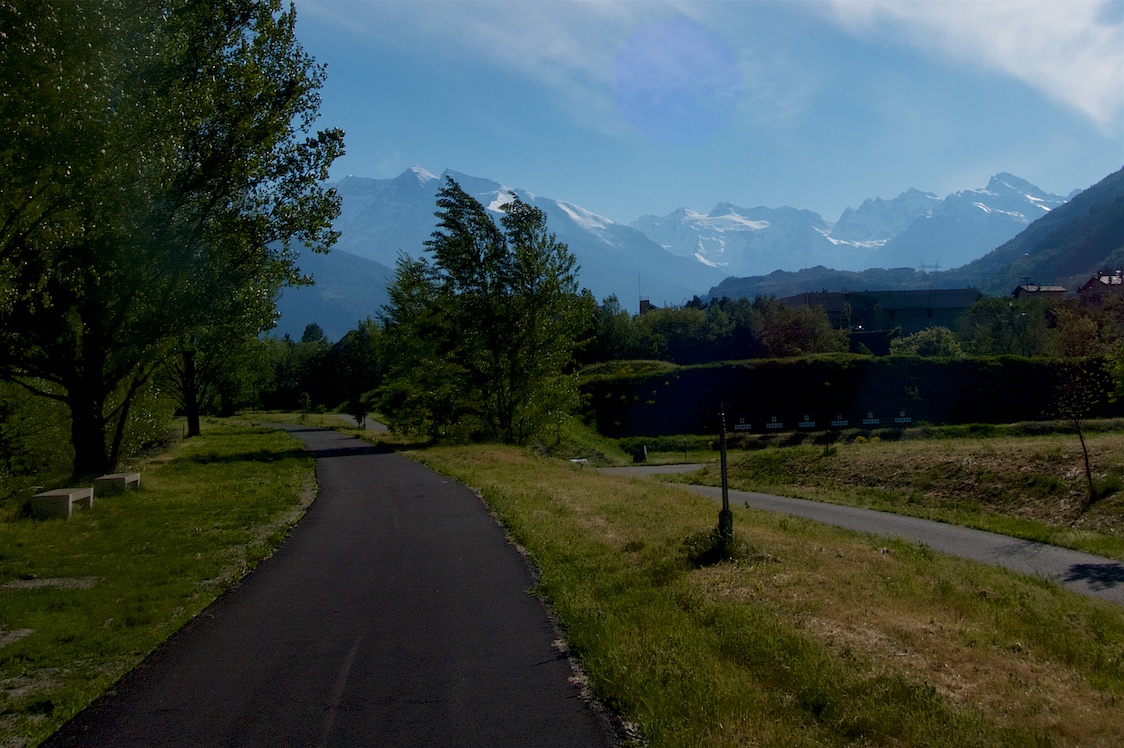 bike path with a view

This was fun. I had initially planned to ride to Druges and then do a second small climb. But I just kept going, and it was an excellent decision. Maybe I’ll try and visit when all the snow is gone and see how much further once can go.

I’ve been having trouble on some of my old posts with maps no longer working as companies change their code. I’m trying to fix this, but may start posting 2 maps on future posts to future protect things.