Every year local cyclists shake their heads at cowardly Tour de France organizers that run the Tour right by this Jura giant, but refuse to climb it. It’s just too steep!

There are four great – very challenging – routes up this massif. I have previously climbed Colombier from Culoz.

It was cool and grey today but I was determined to climb this from the hardest side starting in Artemare. Almost from the start, it is a typical, beautiful deserted Jura road heading up through a forest. It’s good enough quality for a road bike but I brought my hybrid for the easier gearing.

I had no speed or time goals, I just wanted to finish. As I approached the steepest stretches (one bit is 22%) I could have walked as fast as I was riding, but I was determined to pedal the whole route. My God!! But too much fun.

Nearing the top, I deserved some luck for the effort, and suddenly I burst through the clouds into bright sunshine (OK, burst makes it sound like I was going faster than I was). Mont Blanc was right there in my face above the clouds. Beautiful. I was absolutely soaked with sweat from the effort so the descent was shockingly cold – I took the super-scenic easier (but still very difficult) way back to Artemare, as even top cyclists won’t usually descend the route I climbed – it is just too dangerous. 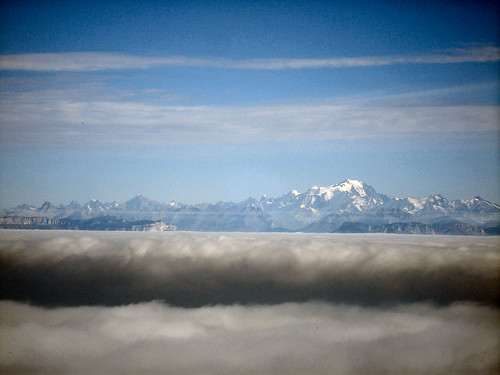 Cyclo tourists will continue to flock to places like Alpe d’Huez, Galibier, and Ventoux – and for good reason. But this area — with Mont du Chat just down the road (Le Cycle magazine’s July issue called it the toughest climb in France) and Col de la Biche on the other side — is filled with challenging, stunning rides on virtually deserted roads.
Le Grand Colombiere is part of the Jura mountains (as in Jurassic) not the Alps. Following the Rhone as it leaves Lake Geneva, a good rule of thumb is any mountain on the North/West side of the river is a Jura, and anything on the South/East side is an Alp.

From June 2006: Probably the most famous climb in the Juras.  There are four very steep ways up this monster.  To become a Confrérie des Fêlés du Grand Colombier (translated:  Brotherhood of Loons (freaks, crackpots) of Grand Colombier) one needs to climb all four in one day.   YIKES …. I am a decade past being able to do that as each climb  is a challenge in its own right.  One route has parts with a grade of 22%!  Trust me 11% is very hard, 22% near impossible.  Cyclists are sternly told not to descend by this route.  It’s just too steep.  Although just climbing 2 sides grants member status.