Doreen and I are on a five day vacation in the Vanoise Alps (France near Val d’Isere).

The plan today was to park near the base of Les Arcs at Bourg St Maurice so Doreen could climb this long, challenging, but never too steep climb to our hotel while I biked across the valley and tried La Plagne. I had previously cycled up to Les Arcs as part of our January ski vacation – COLD!! But Fun. If you want to cycle an Alp in the winter, bring a mountain bike, a balaclava, and some courage – and visit a ski station as the roads are plowed.

La Plagne first appeared in the Tour de France in 1984 and 1987 both times won by Laurent Fignon. It last appeared in 2002 and was won by Michael Boogerd.

In a tip-of-the-hat to Alpe d’Huez, all 21 hairpins are signed and numbered. And while no where near as legendary or epic as the Alpe, La Plagne is longer, finishes higher, and is a bigger ascent. And despite all my climbing this year, it was only the third summit above 2,000 metres – yes it’s a major climb (21kms 1,430 metres ascent).

Describing it is simple: it steadily winds up the side of a mountain – with progressively better views of the valleys below and Mont Blanc to the North-East. A couple of rest days left me feeling fairly strong, so I was working prettty hard but cheerfully – I chose Aime La Plagne (at 2,090 metres) as my finish although Belle-Plagne (2,060m) and Plagnes-Villages (2,100 m) are options during the last couple of kms. Frankly, I was tired, or I would have peaked at the other peaks.

My 60 km tour took me back to the car and I drove up towards Les Arcs and found my wife – smiling like the cheschire cat – enjoying a quite fancy meal at a renowned mountain restaurant just below Les Arcs – she had cycled up just over 1000 metres on her HEAVY hybrid – chapeau. 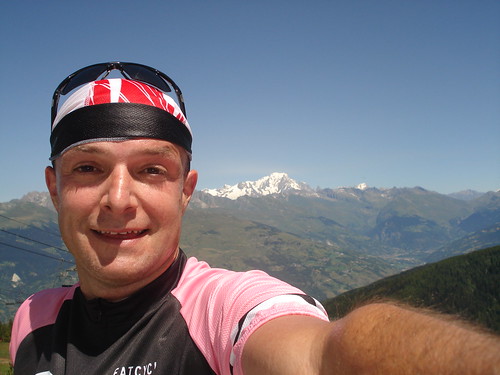