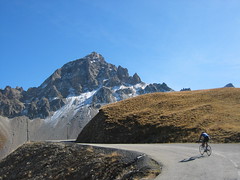 Here is a preview of stage five of the upcoming July 2008 Lost Boys Tour d’Enfer.

A trip organized by my friend Leslie that will include people from the USA, Canada, France, Turkey, Germany, and Switzerland.

Along with Alpe d’Huez and Mont Ventoux, Col du Galibier is one of the greatest cycling cols in France, and is the 4th highest mountain pass in France.

Today’s route will be in the opposite direction of the previous day’s Tour de France stage. This is definitely the more interesting side of Galibier and a truly special route.

2008 will be the 31st time that Col du Galibier has been in the Tour de France – more than any other climb in the Alps – first appearing in 1947.

The list of riders to be first over Galibier include such legends as Coppi, Gaul, Merckx, and Pantani.

Rated Hors Categorie (hardest rating) Col du Galibier is of course on Le Cycle Magazine’s list of the 30 most beautiful climbs in France.

In 2007, the Tour and your author climbed Galibier from this side. This day alone will make your trip! 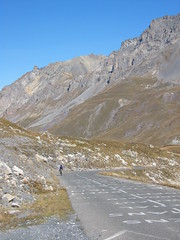 The climb can be split into four parts. First, the Col du Telegraphe is a great climb on it’s own. 12 kilometres (over 7 miles) generally at a steady 7% grade. It’s a very pleasant ride that winds it way up through the woods – but still hard work.

The second part is a 5km (3 mile) descent into the ski resort of Valloire – enjoy the rest! The third part is a straight shot (8kms, 5 miles) up through the valley with high Alps on either side. Occasionally into the wind, this can feel harder than it looks. You are now above the tree line.

Finally, at Plan Lachat, the ride gets epic. The route seems to turn up, and yes it’s going to go OVER the mountains. During the last 8kms (5 miles) you will feel the altitude and the tiredness of the last few days. Make sure to take time to read the tour graffiti all over the road.

Once at the top, it is 35 kilometres (22 miles) descent – past Col du Lautaret – all the way to the hotel! Remember, just below the top on the other side is the big monument to Tour Founder Henri Desgranges (photo below).