Mont Revard is the big Massif just north-east of Chambéry, overlooking the south-east side of Lac du Bourget. Its imposing cliff face dominates the views east and the roads up need to cycle around behind these cliffs from either the north (Aix-les-Bains) or the south (Chambéry).

For details of the Aix-les-Bains climb see here. My plan today was a big counter-cockwise loop, investigating the bike paths down low, and climbing Revard from Chambéry.

Here is an old photo of Mont Revard, taken from the summit of Mont du Chat (a superb bike climb): 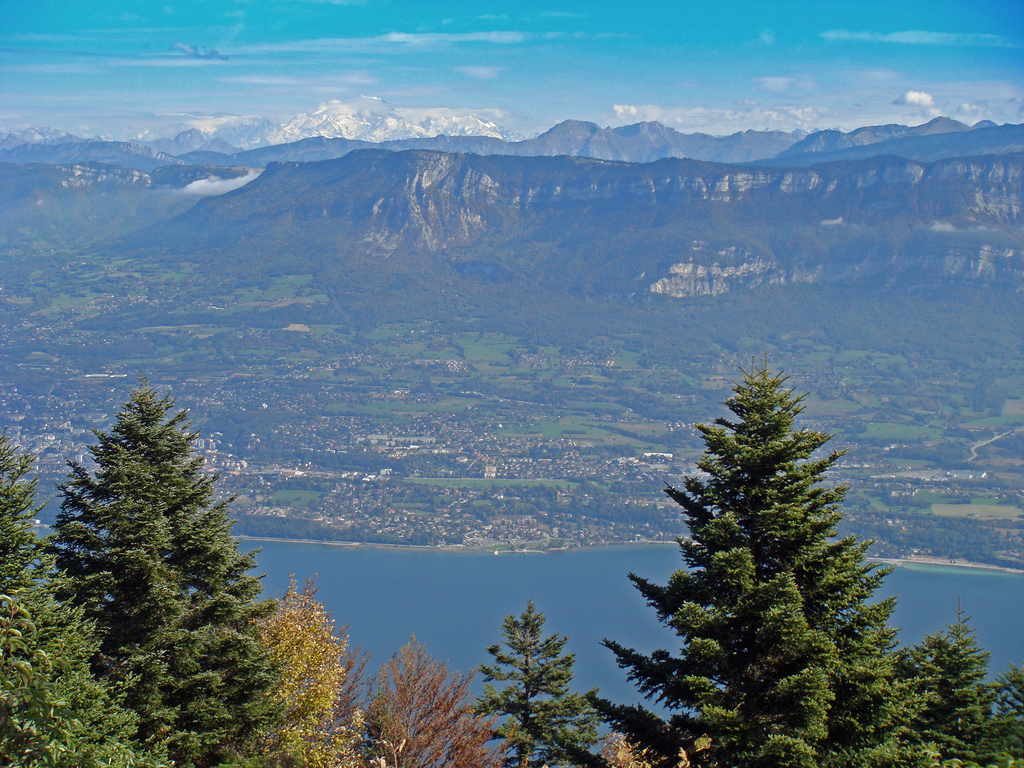 I started in the spa town of Aix-les-Bains on the banks of Lac du Bourget. The first 20 kilometres are flat and on bike paths. Beware, the first 5 kilometres, beside the lake, can have lots of pedestrians. If you want to go faster, take the busy-ish road – it has a bike lane. But me? I enjoyed slowly riding beside the water.

At the south tip of the lake, the route becomes a quieter bike path all the way to Chambéry. Excellent.

After 20 kilometres, it’s a few tricky kilometres passing right through downtown Chambéry. Although impressively, just about every road has good bike lanes. Leaving the city, look for signs to “Massif Des Bauges” – mountains!

It’s not the steepest climb (see profile at top), but it’s a long slog, on a wide road that becomes quiet after climbing past a few villages. The imposing Mont du Margériaz provides nice views as the road climbs up and around the side south of the Mont Revard cliffs:

There is a slightly steeper more direct route to the summit at Revard, but I decided to first visit Col de Plainpalais.

The route soon climbs into the Savoie Grand Revard ski domain. A combination of small Alpine skiing pistes and some of the best Nordic Skiing in the Alps – with over 100 kms of trails. Photo from February:

I took the little extension to Revard and the restaurant look-out point. The photos don’t do the great views justice.

I enjoyed this loop. Down low, the bike paths make the traverse between Aix-les-Bains and Chambéry a pleasure. And the climb itself is big and fun. My next Revard project may be to explore a way up by mountain bike.