Trending
You are at:Home»Famous»Mont Ventoux – All Three Sides

Above: Approaching the summit from Malaucène side.

Woooohoooo. I’d had been feeling relatively fit, so I decided to try something a little crazy as the season winds down. I am a little surprised but really pleased that I managed to cycle all three sides of Mont Ventoux in a single day.

There is a 4th way possible by mountain bike, explained here.

Side #1: Start Bédoin – The Famous Side

I decided to start with the most famous side, to see how the legs felt. This side can be divided into three parts:

I felt better than hoped heading through the woods, gradually passing several riders. At this point, I started thinking a triple ascent was at least a possibility.

At Reynard the wind was howling from the north-east. This led to a bizarre experience where occasionally i had an angled wind push, and occasionally the wind in my face.

Despite it being a sunny clear day in the region, I couldn’t see the summit due to fog, and the top was freezing and viewless. Not to worry, I was confident the fog would melt as the day progressed.

The last half kilometre was steep, and foggy: 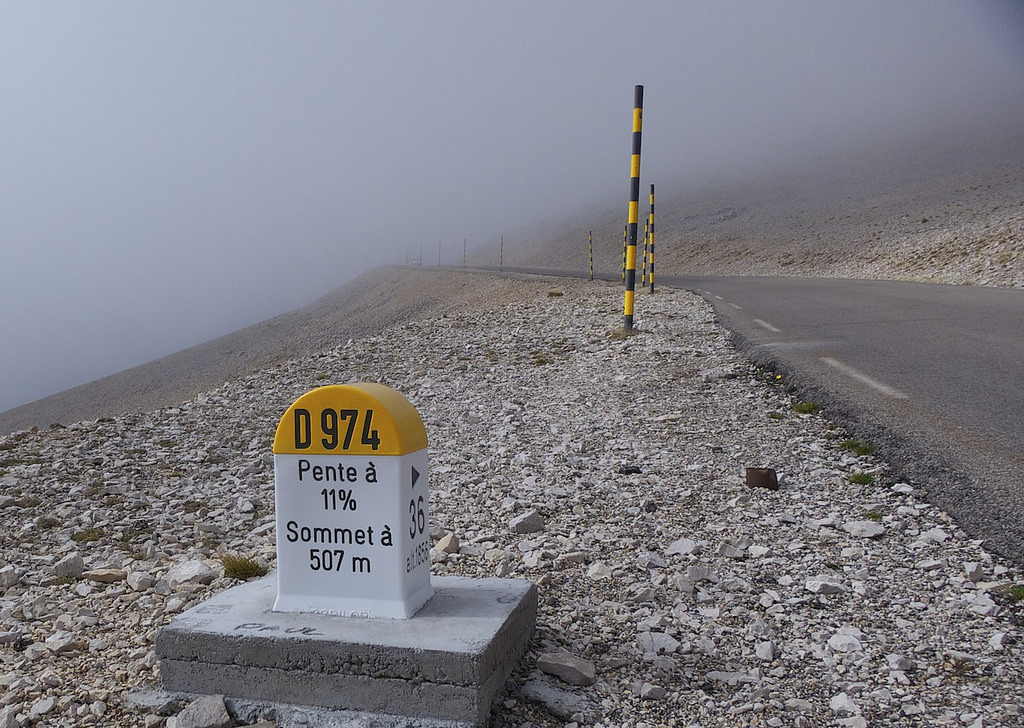 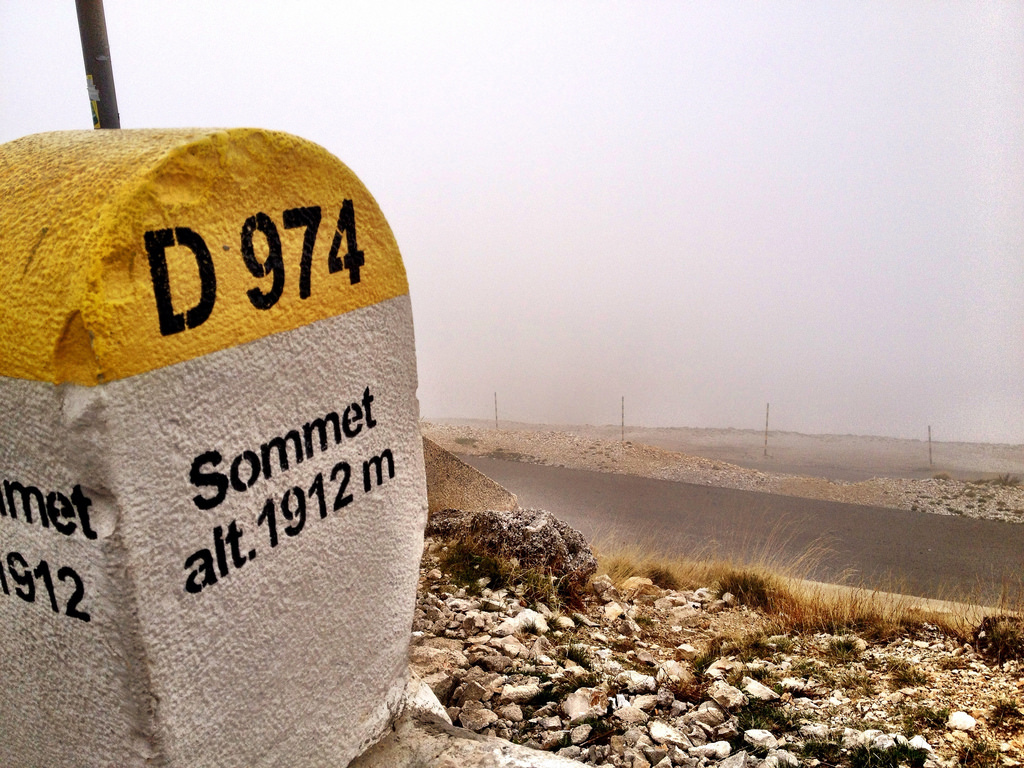 I proceeded to descend down the back side to Malaucène.

My main strategy was to eat and drink to excess all day to avoid the bonk. I probably gained weight during the ride, consuming 5 water bottles, 3 cokes, 4 gel power shots, 2 chocolate bars, one apple juice, and a huge baguette fromage.

Less famous than the Bédoin side, the climb from Malaucène shares almost the exact same statistics. This is a big climb.

The toughest part of this climb is a four kilometre stretch in the middle , below the little ski station at Mont Serein (see 3rd small borne photo above). Plenty of stretches well above 10%. Hard work.

But by far the funnest part is the last 2 kilometres as the summit comes into view. Beautiful hairpins stretched across the moonscape, and the unforgettable “lighthouse:” 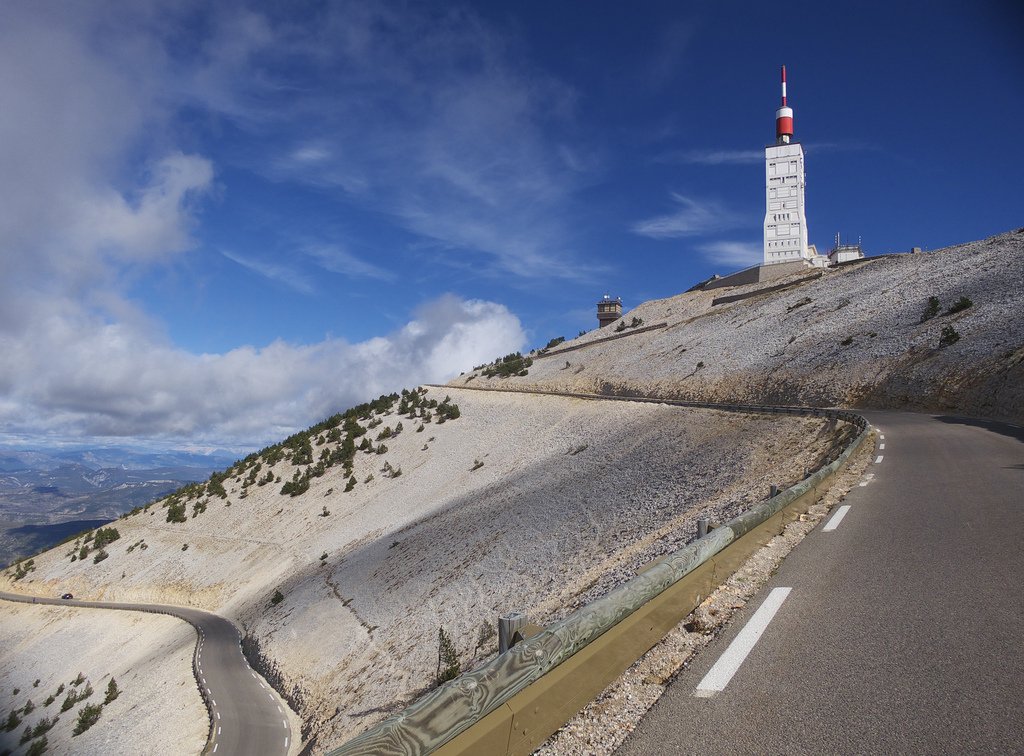 I snacked at the start of this side, and stopped for a coke at Mont Serein, and generally felt pretty good as I kept my effort slightly lower than my first ascent. The arrival of sun at the top didn’t hurt my spirits either. 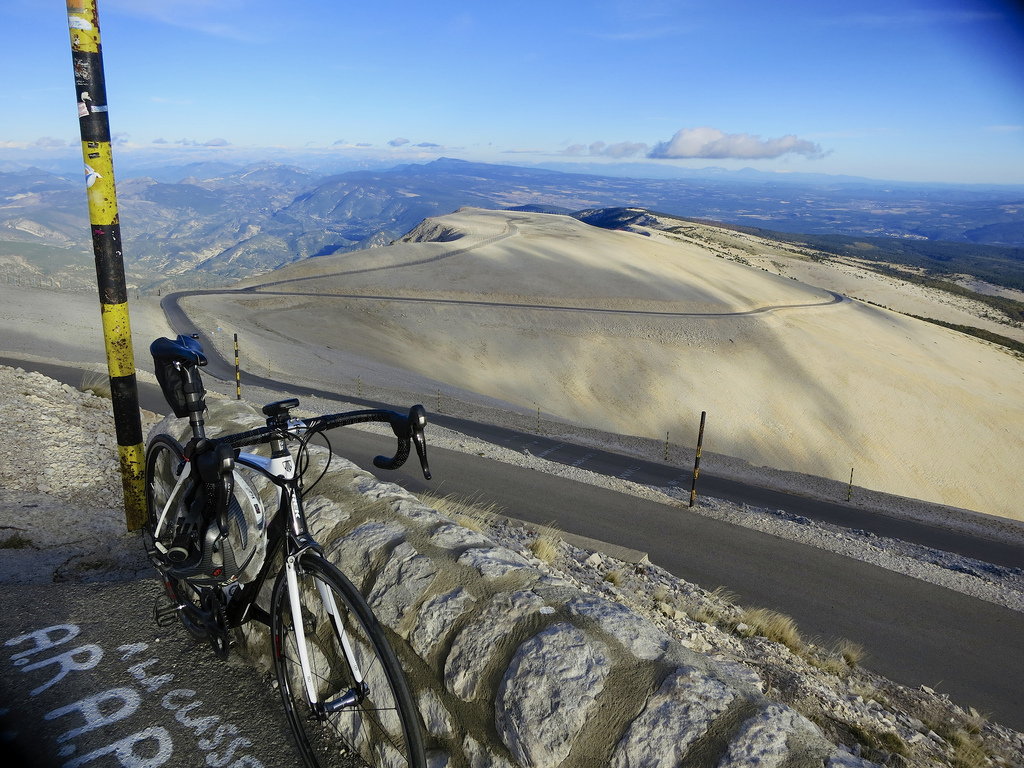 It was decision time. It was mid-afternoon, and I had to get a move on, but I decided to descend the 26 kms to Sault, and attempt the third side.

This side is longer and starts several hundred metres higher than the other two side — thus it is FAR less steep.

Most people call the start at the village of Sault, but the low point is a kilometre before Sault – shortening the climb – and is where I started.

While the two tough sides of Ventoux feature impeccably surfaced, wide roads, with bike lanes – the Sault side is narrower, far bumpier, and far quieter. I saw few cars and no cyclists.

Immediately, I realized I had a problem — a strong head wind much of the way. But after battling so many steep kilometres, this side was a pleasure, and the distances flew by.

This side is perfect for someone that would like to cycle a “full Ventoux” but is slightly intimidated. Long, but rarely steep, and still the same famous finish.

With 6 kilometres to go, at Chalet Reynard, the route joins the classic Bédoin route, and becomes the toughest part of this 3rd ascent. But I was vaguely euphoric at this point as I realized I would succeed. The views passing the Tom Simpson memorial: 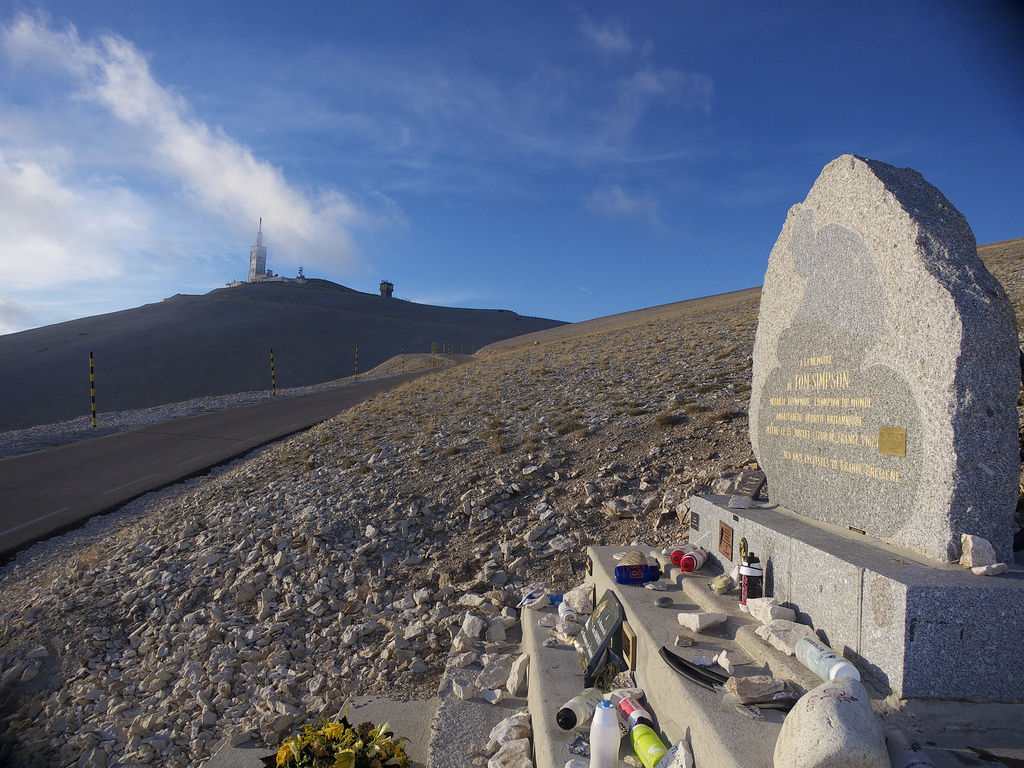 Less than a kilometre from the summit is the Col des Tempêtes (storm pass!) and the wind almost always seems scarily strong here. As I approached, I was only 400 metres away from the summit, but for the first time felt truly exhausted as I tried to stay upright and keep pedalling: 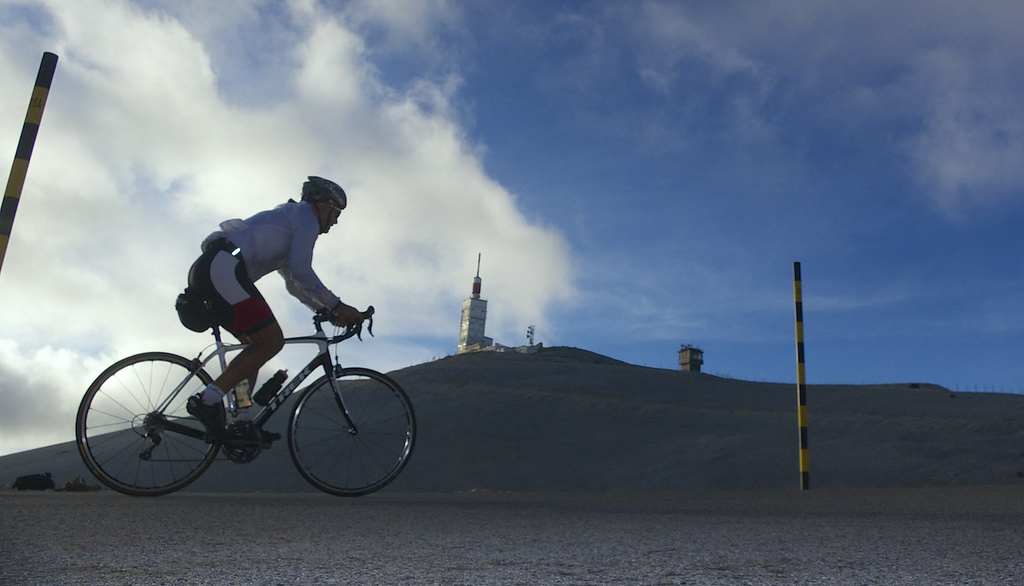 But at as I turned pass the col, I had a helping tail-wind as I survived the final steep half kilometre.

Wooohooo, I was spent. In the wind, I struggled to hold up my bike and get warm clothes on. A kind man in full eskimo gear, hood and all, kindly helped after taking a photo of me, where I was too exhausted to smile properly: 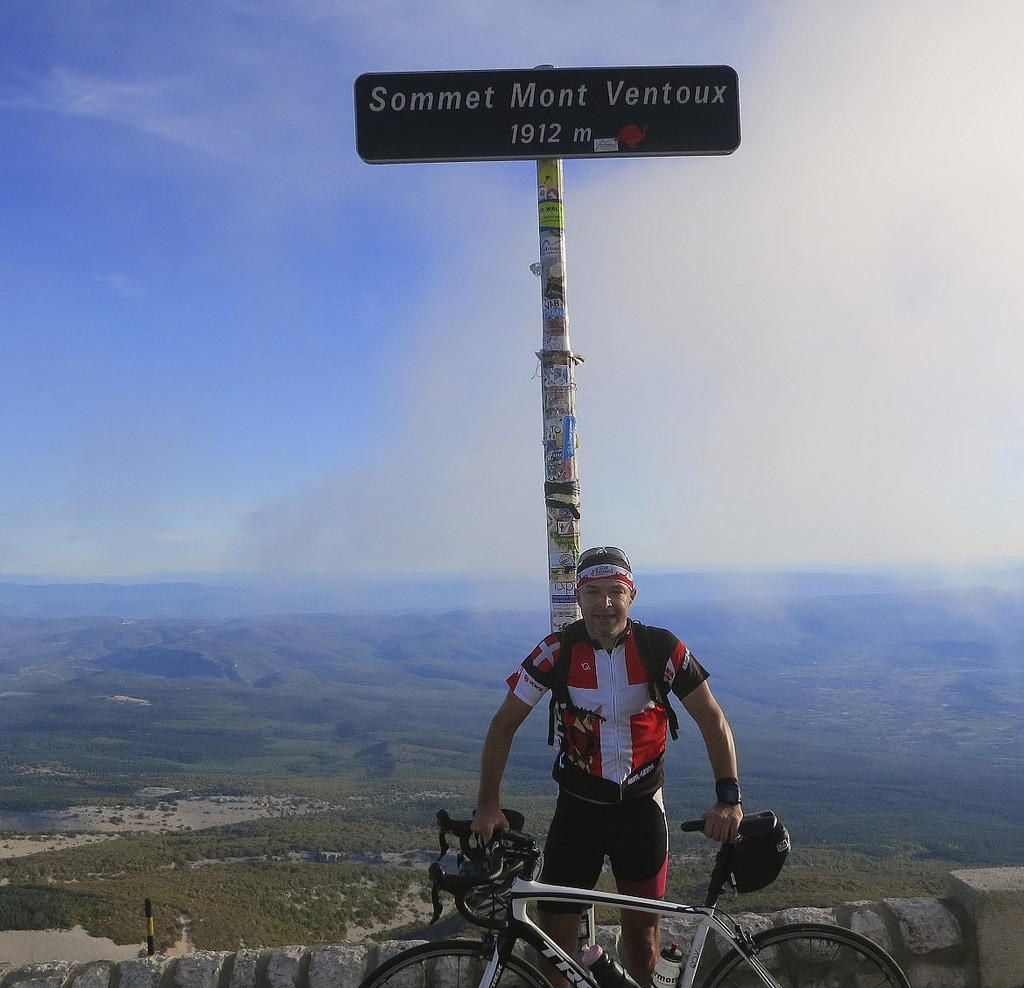 Ventoux was the last big climb I did before my year long struggle with injury that ended this May. During the lay-off In frustration, to avoid complete depression I worked-out at the gym and focused on losing some weight. Glad I did.

Since getting back in the saddle, I have probably over-compensated by cycling “up” stuff more than I ever have. But this mediocre cyclist is feeling stronger than ever – and today seemed a fitting finale to the happiest few months I’ve ever had on the bike. 🙂

Looking for other Ventoux cycling ideas?

There is a 4th way up by mountain bike: see here.

Or try cycling up to see the sunrise: Details here. 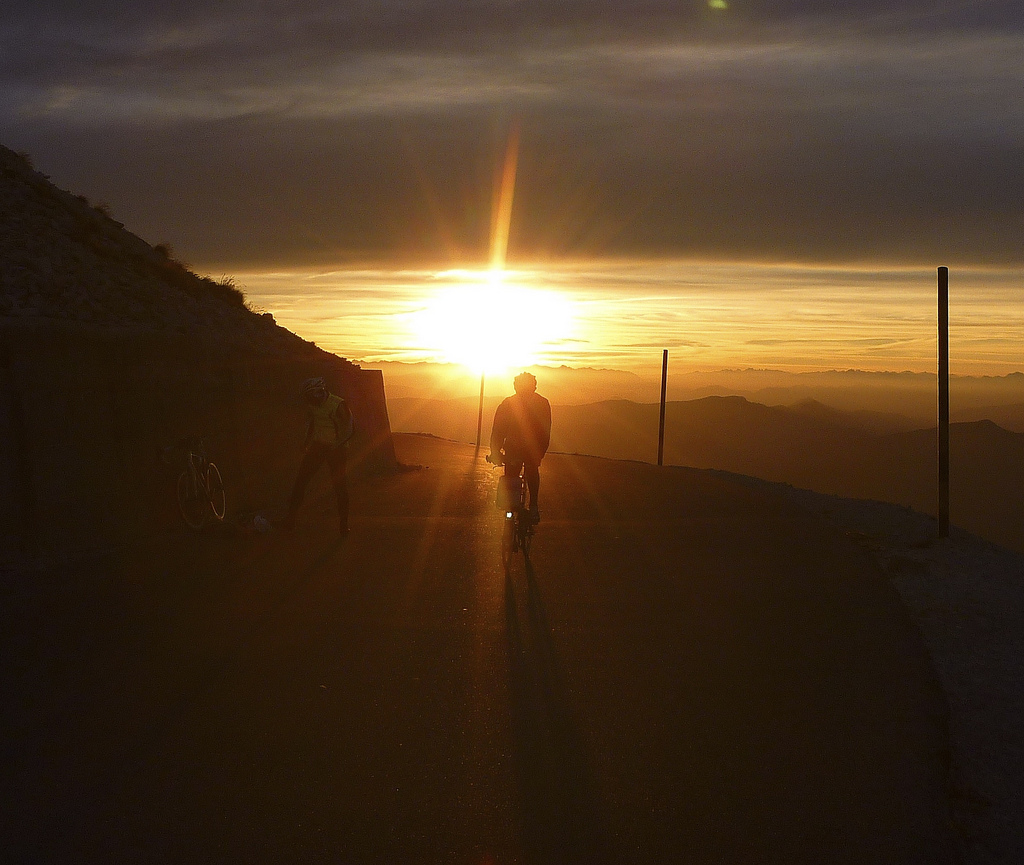 A dream. I never thought I'd be able to do this. Late autumn is the perfect time for this challenge. Ensuring quiet roads and cool temperatures.