Road cyclists – don’t click away. This ride begins with a challenging 11 kilometre fully paved ride that I had never heard of. And yes, then some gravel fun to join the famous paved road between Col du Ranfolly (1658m) and Col de Joux Plane (1691m) – plus some other unpaved “detours.”

I started in Taninges after a quick visit to my favourite bench beside the old Chartreuse de Mélan monastery. 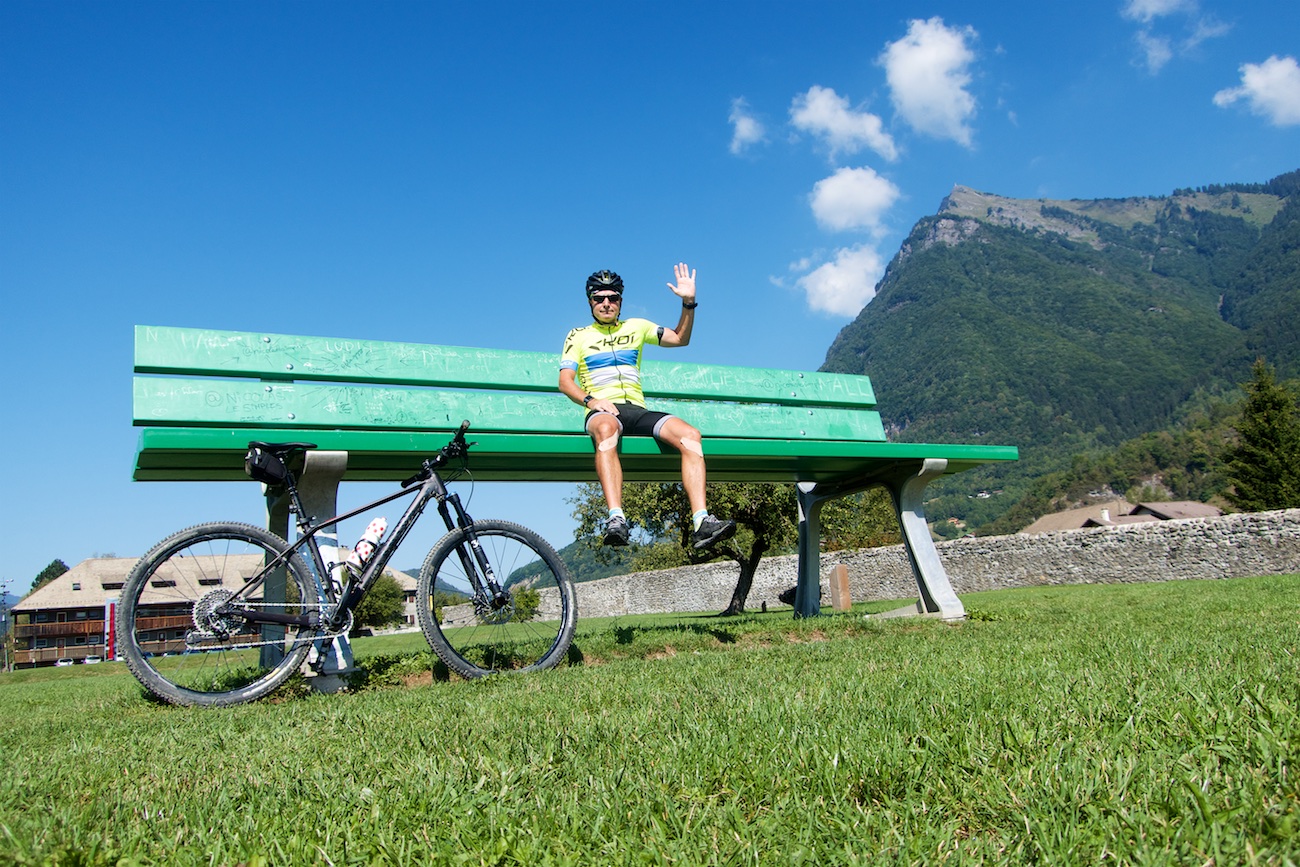 From Taninges, I wanted to skip the D902 as it’s busy with fast traffic, so as the map at bottom shows (after an aborted shortcut) I bypassed the D902 by taking superb tiny paved road just above it to rise out of town. Steep, scenic, and car-free. After crossing the D902, I joined the target route, a fully paved climb up the Montagne de Loëx. 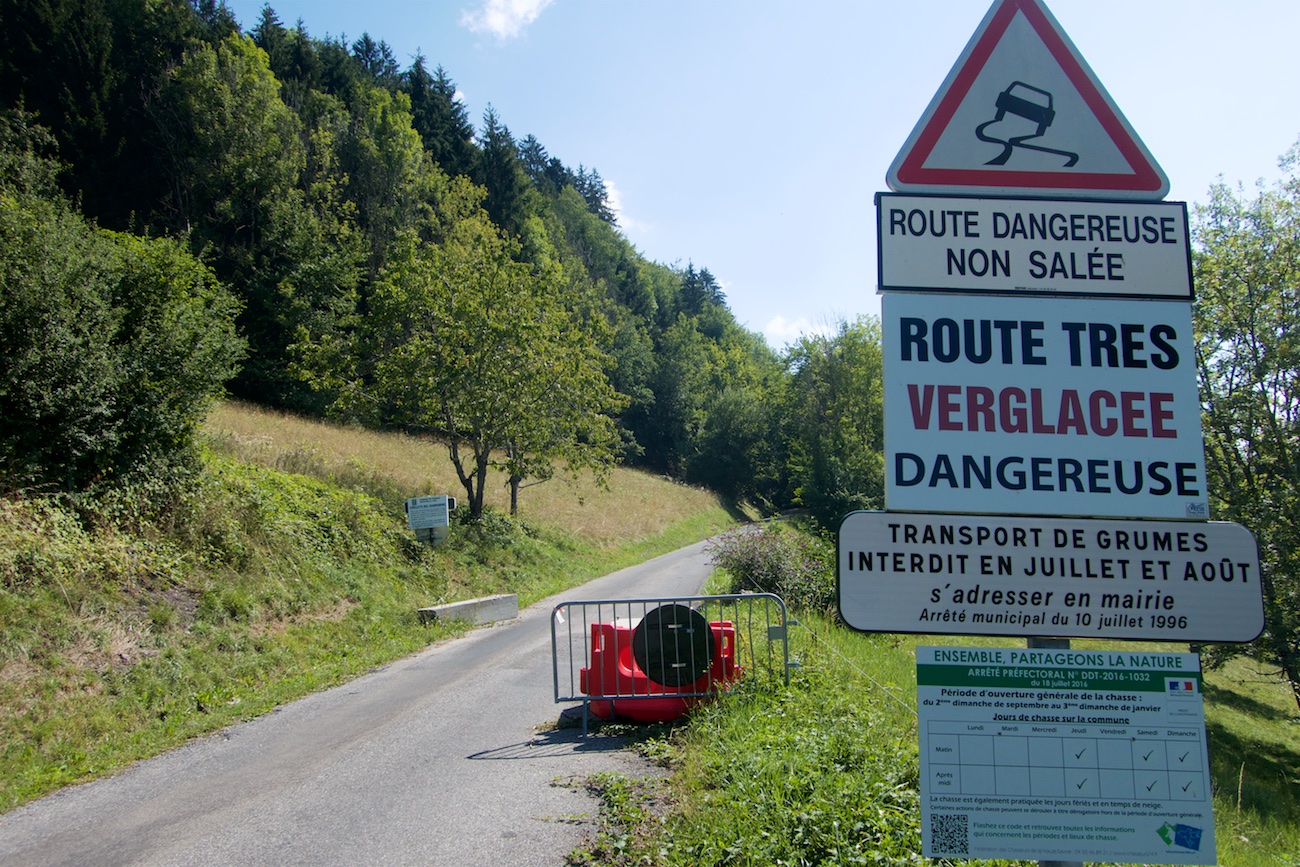 I was amazed at this road. Reasonably paved, it curves up and up through a forest, passing the odd chalet and farm building, with the occasional view of the valley below. I made the profile below solely for the paved stretch to encourage road cyclists to visit. But I would go further/higher on my mountain bike. 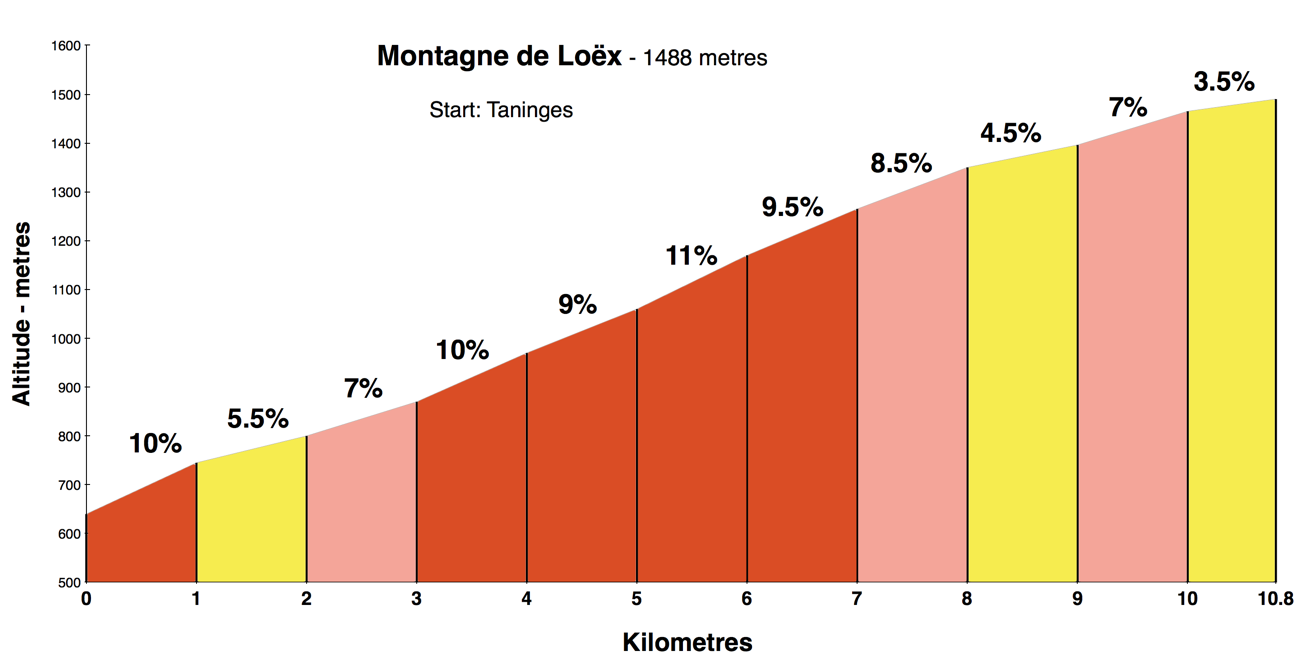 At almost 1500 metres altitude, the paved road ends. There are plenty of trails/roads up here. I would jump off road for a couple of kilometres on a smooth trail to Les Têtes, but a gravel road is also an option. 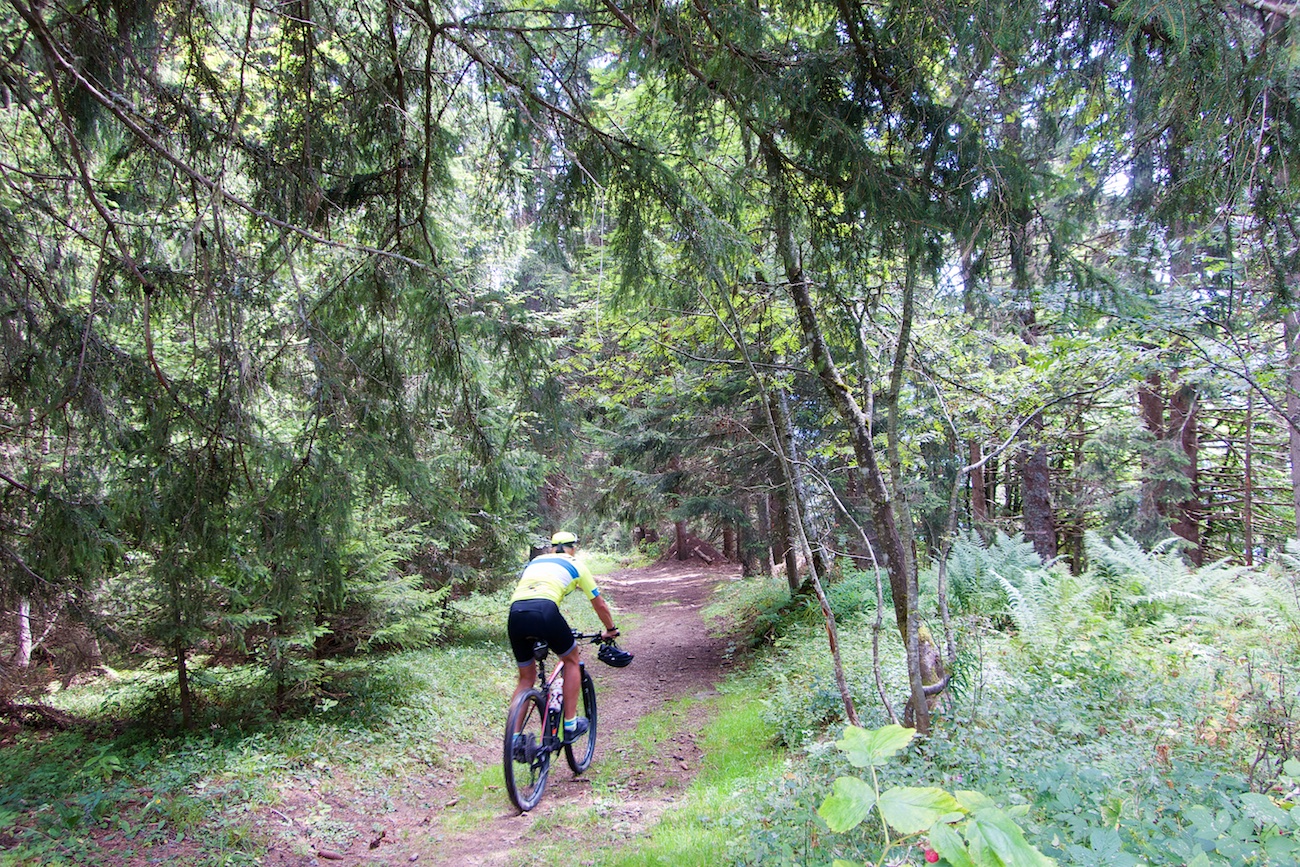 At Les Têtes, I jumped back onto a muddy old road. More ups than downs, good riding. The 3D video does a good job showing that I am riding along a high ridge of mountains, but traversing as much as climbing for long stretches. It’s the edge of the Zone Naturale Protégée du Plateau de Loëx.

How’s the surface? It depends how fussy you are, but this route is very rdieable, fine for a modern gravel bike I think. 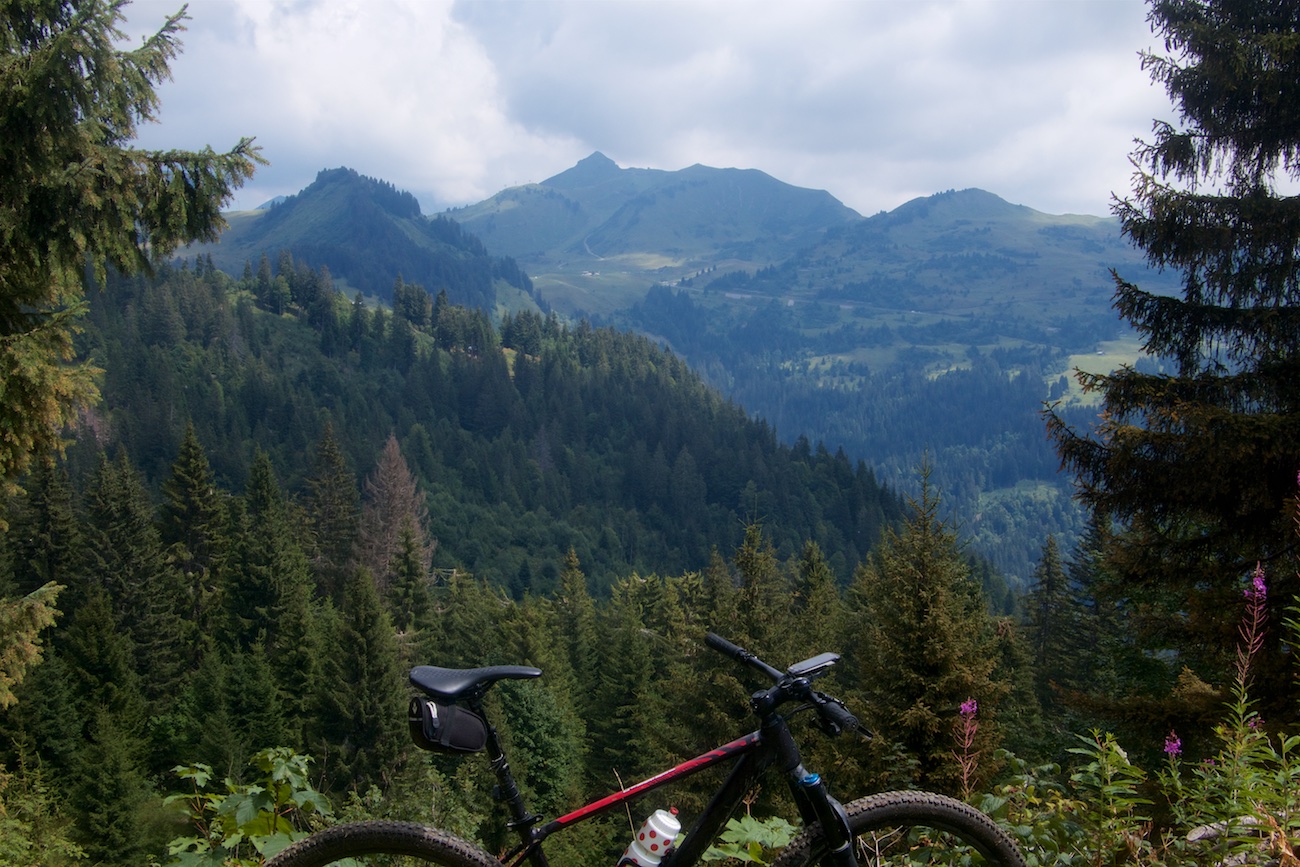 Joux Plane far in the distance

On my left was the Les Gets ski domain (linked with Morzine). I would follow a few more kilometres of old gravel road and finally reach the famous main paved road near its high point, between Col du Ranfolly (1658 metres) and Col de Joux Plane (1691 metres). 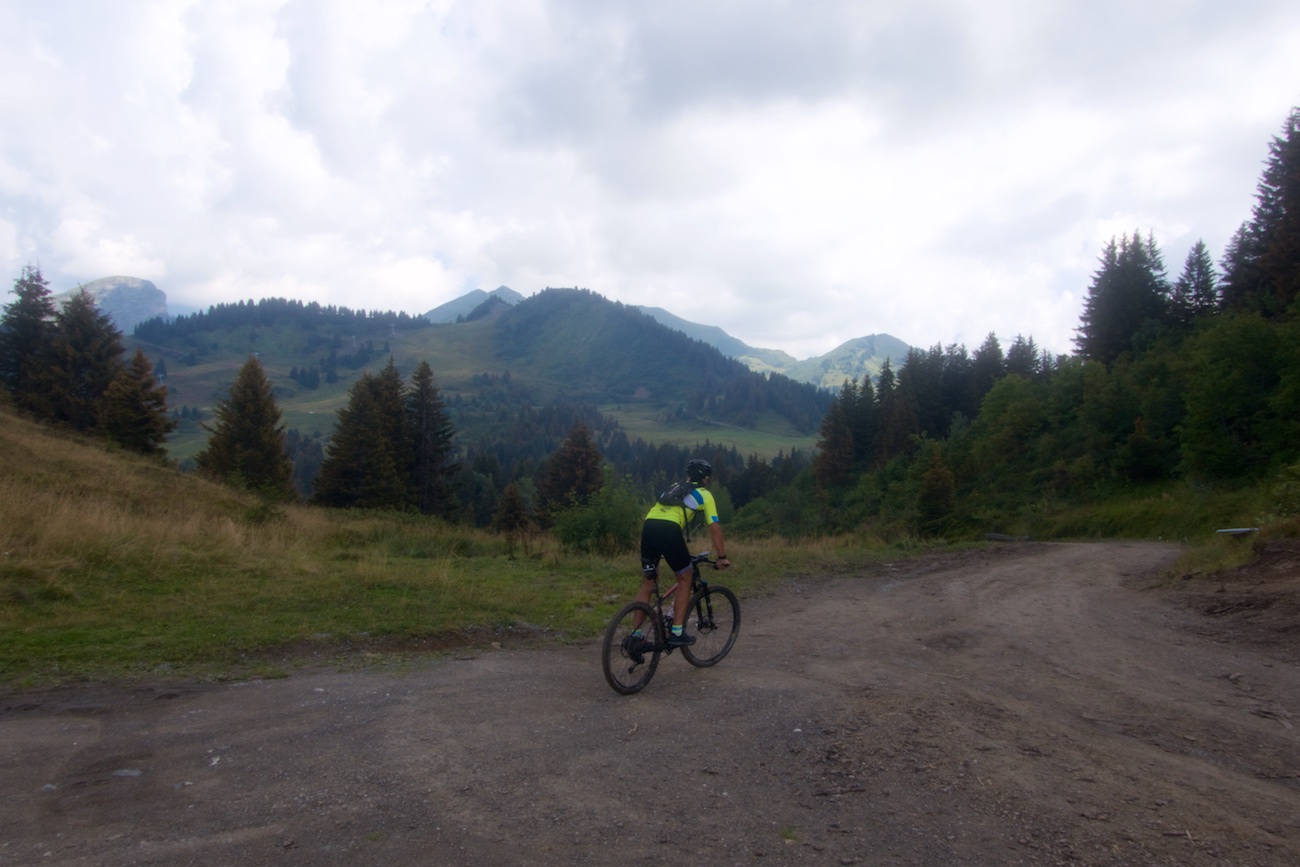 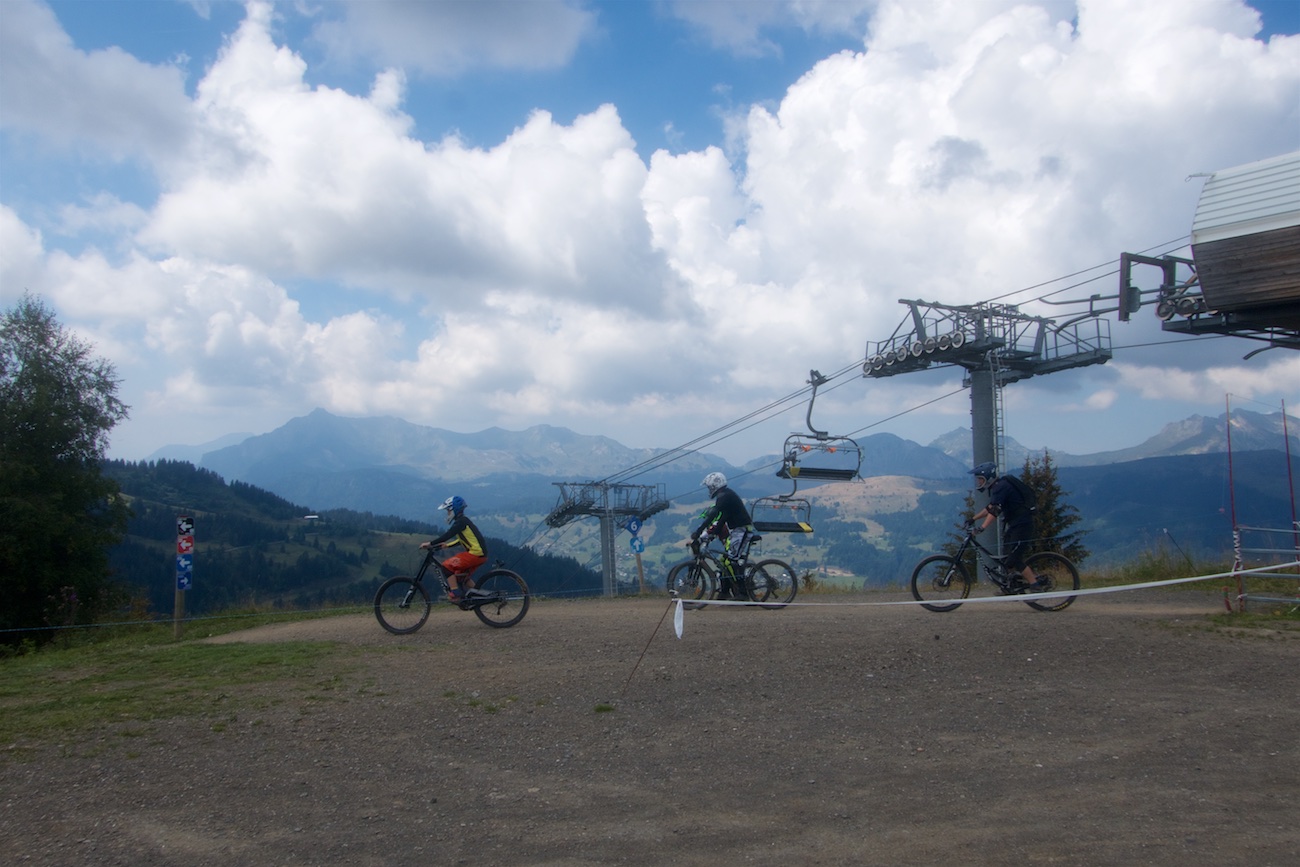 Here is another un unpaved ride up to Joux Plane that climbs through the Les Gets ski slopes. Avoid in July/August due to the downhillers.

Next, I headed to Col de Joux Plane just down the paved road. Far less snow in summer than in winter: 🙂

The Col sign on the main road says 1700 metres, but the road is only reaches 1691 metres, and runs past the true geographic col without ever crossing it. With a mountain bike, I was able to ride higher to the true col at 1715 metres (starred on the map). 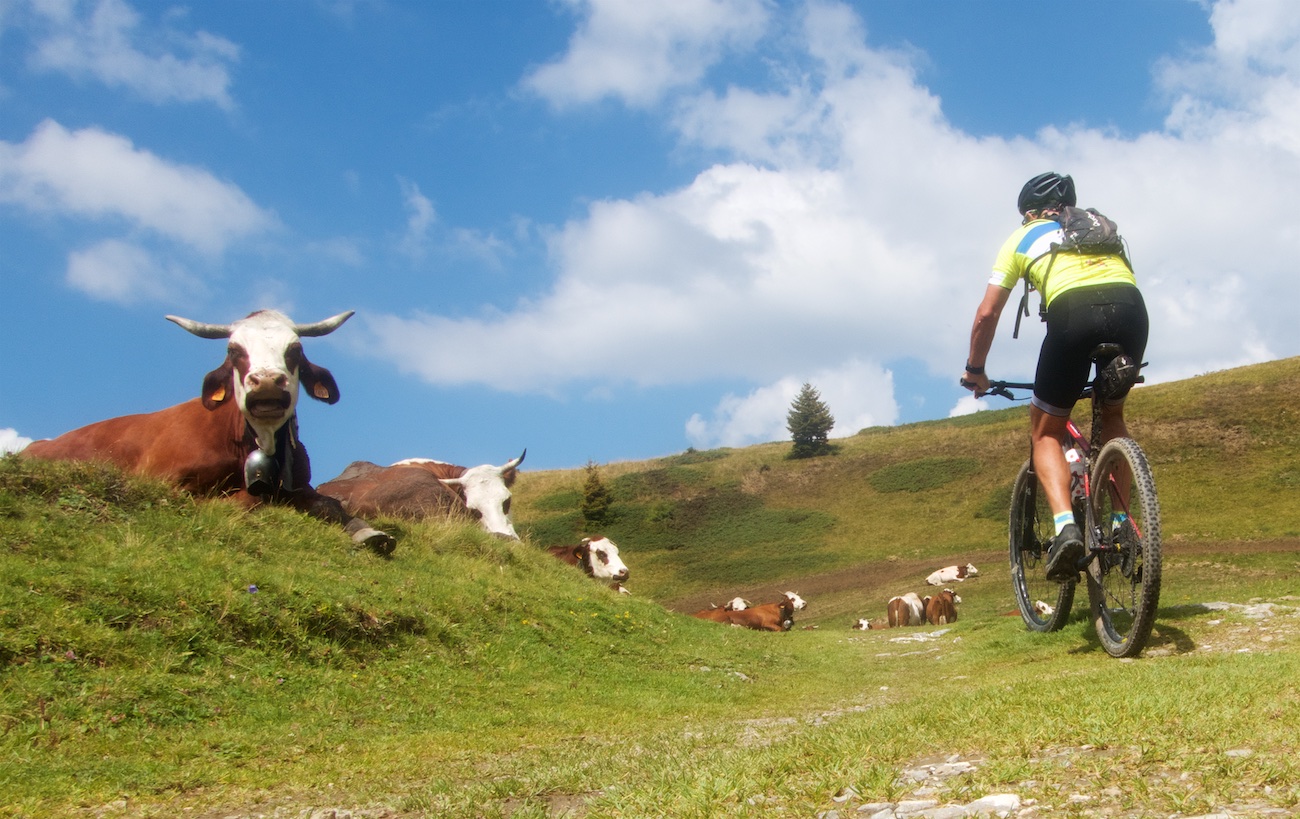 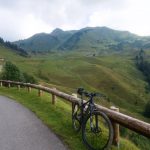 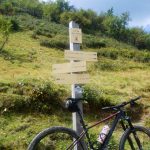 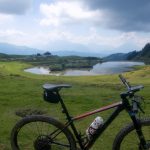 I had mapped on my GPS the gravel road behind Joux Plane that leads to the top of a newish chair lift near Pointe d’Angolon (2090m). But as I feared, the “road” looked 40%/50%. Zero fun on the bike and little prospect of continuing over the top. So I changed plans.

In late winter, there are groomed cross-country skiing trails from Col de Joux Plane. The best trail leads to the Croix de Mapellet (1770 metres and majestic views of Mont Blanc). Clouds blocked my view but I decided to head to the Croix. It’s very rideable, although there are some sort of man made ridges over the first half kilometre that is quite annoying. But beyond it’s fairly easy/smooth and very beautiful. 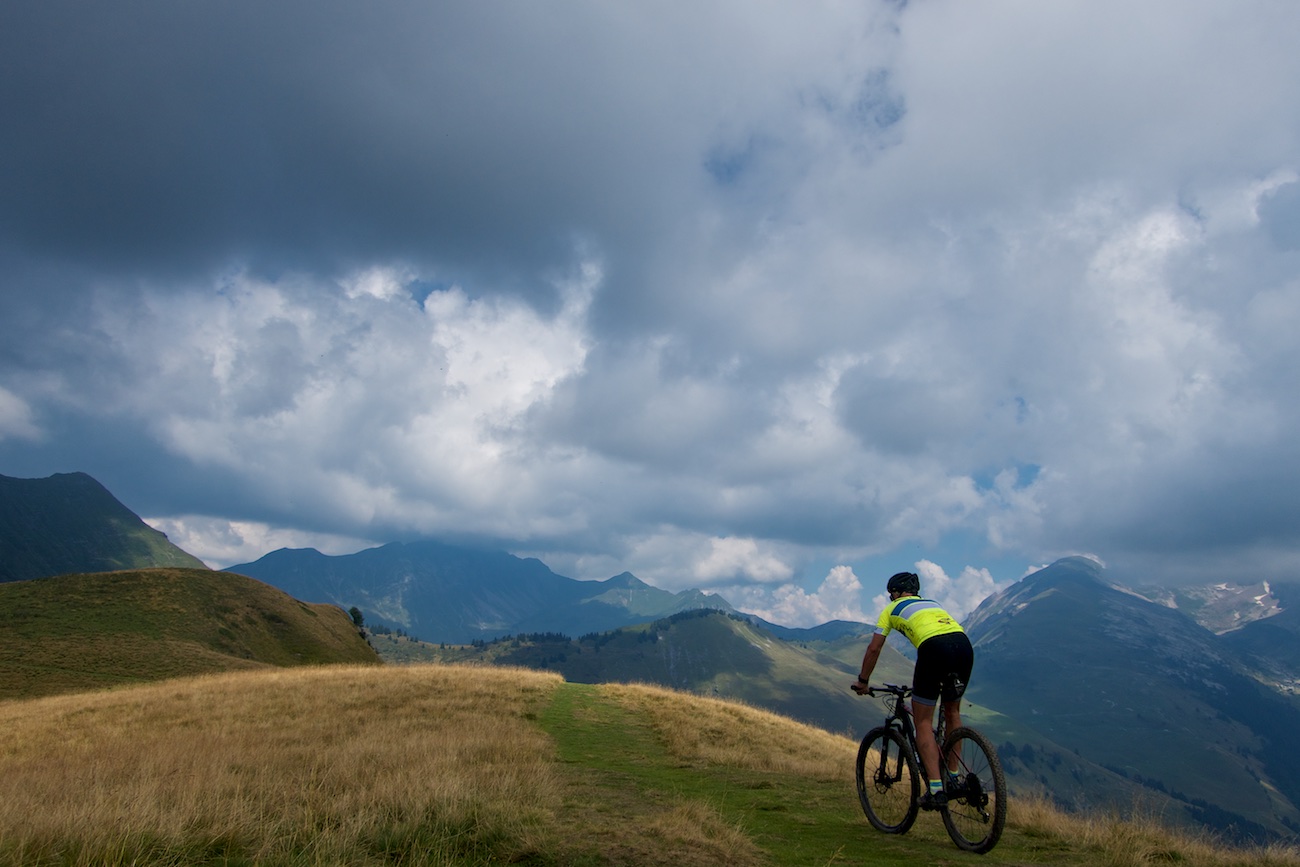 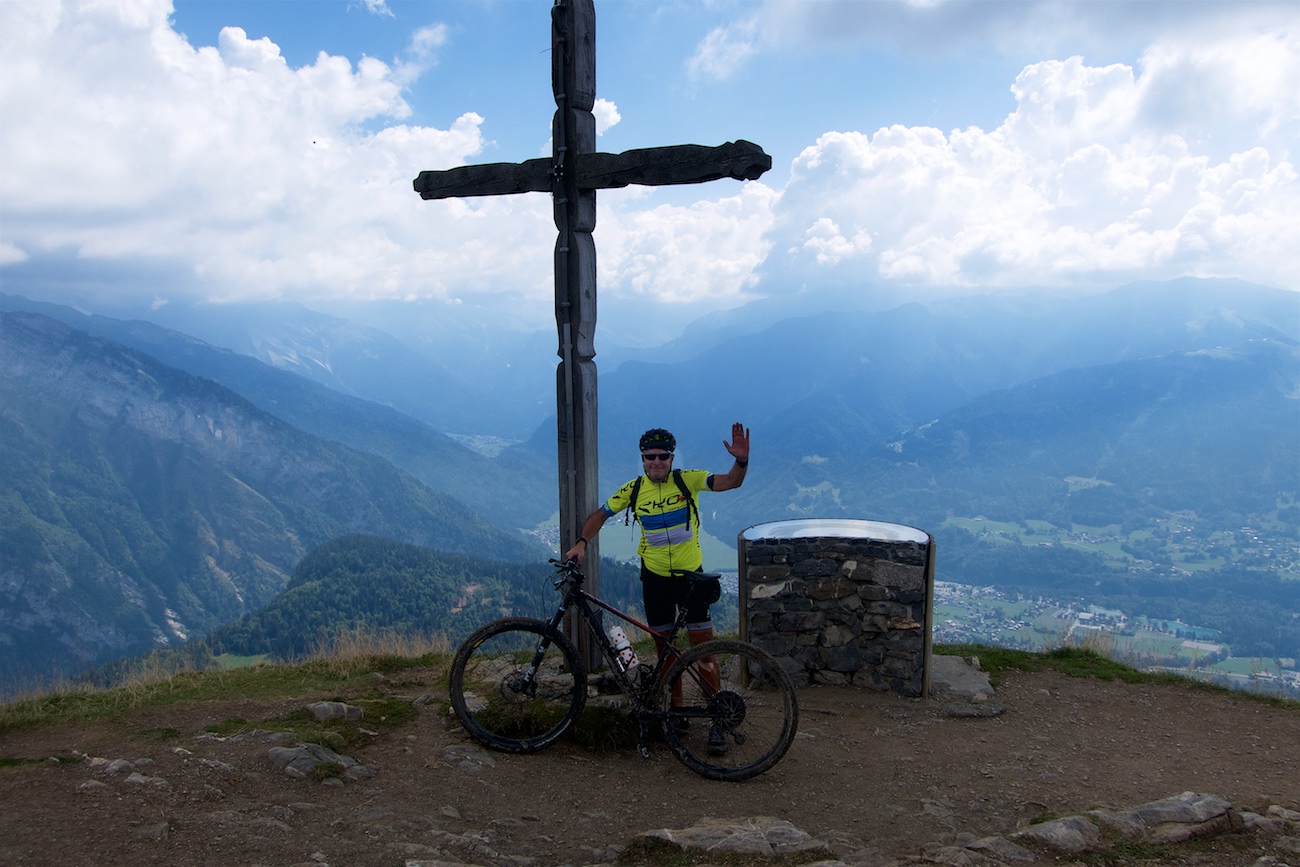 A fun winter idea? Several times I have mountain biked up to Col de Joux Plane in winter and then rented cross-country skis at the little cabin at the col: Details here.

From the Croix de Mapellet, I descended down to a little gravel road that led me to the main paved road. 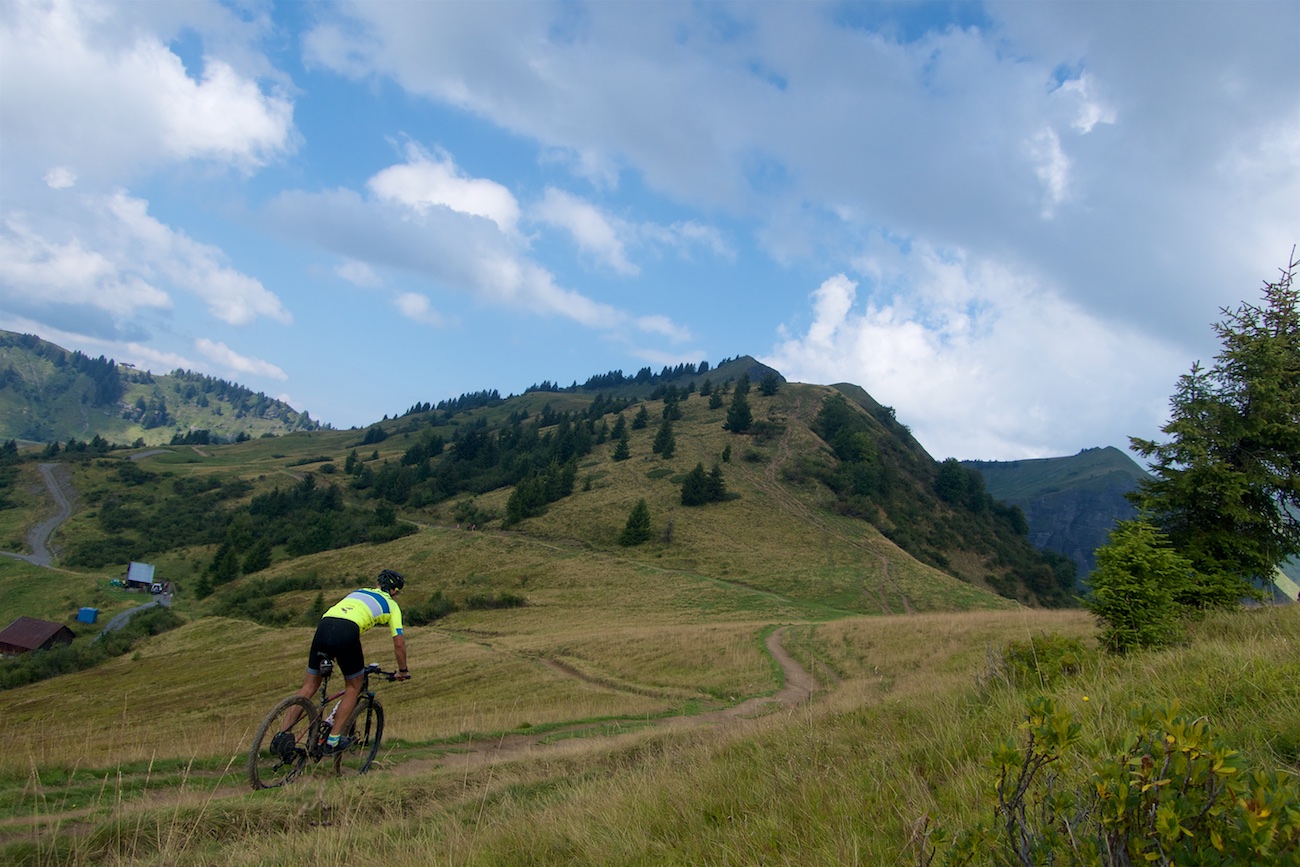 I would descend the famous north side of Joux Plane for a few kilometres but then turn off to an old, old, old road/path. Steep, bumpy, barely used, but rideable on a mountain bike. But I’d stay clear on a gravel bike. I only followed this for a two or three kilometres, and jumped back on the paved road. 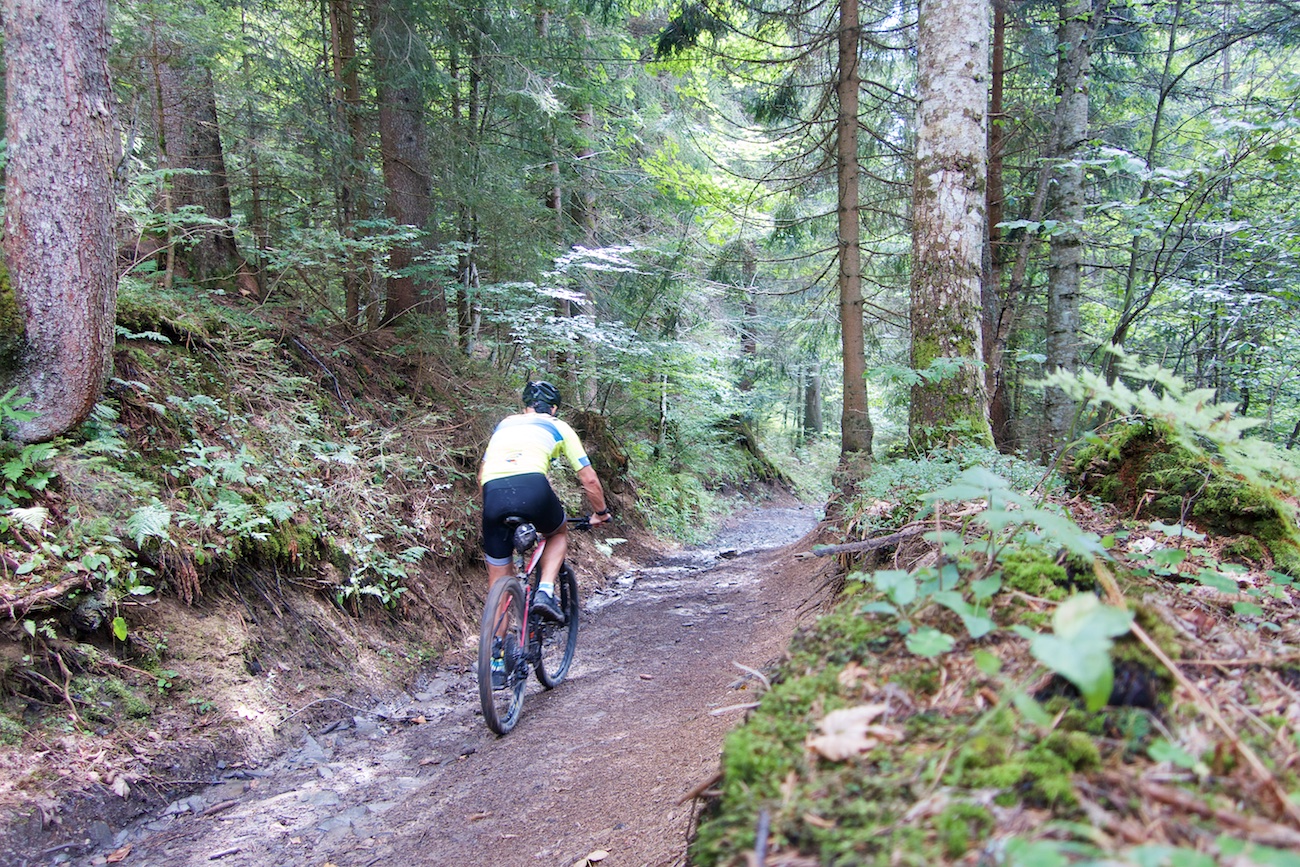 Note, the last few kilometres of my descent were on a paved road but west of the famous road that ends in Samoëns. This alternate route can shorten the traverse down low if making a loop with Col des Gets or Col de la Ramaz.

A Surprising highlight of the Ride:

Reaching the base of the valley, I had mapped a route beside the river to avoid the main road. This turned out to be a fabulous trail. Wide, smooth, no cars, through woods, and river views. I loved it and will likely take my wife here to explore it further up and down the valley. 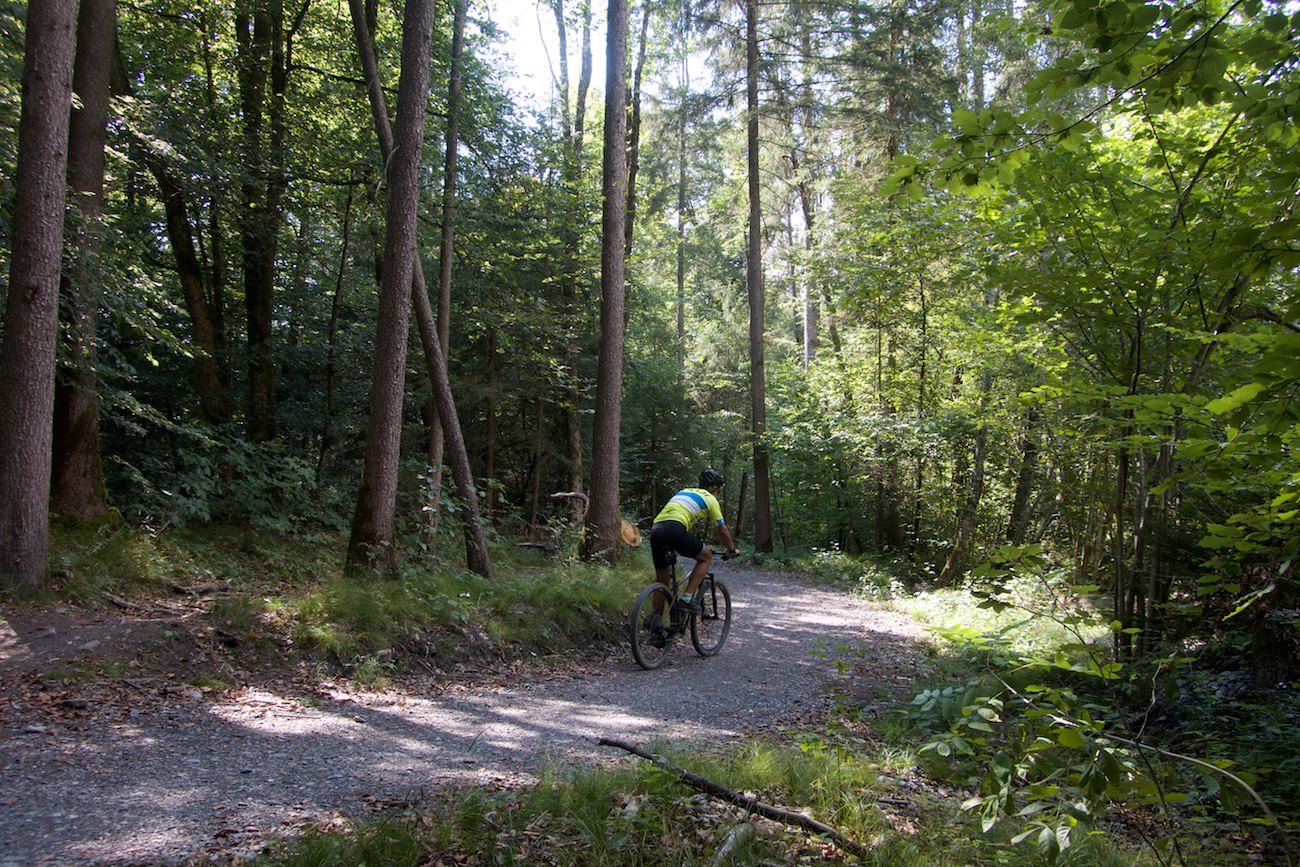 This is a great loop, exceeding expectations throughout. First, finding such a long, high paved road that I’d never heard of was embarrassing … but great. The higher trails were very rideable. Croix de Mapellet is beautiful, and the lower river trails a true surprise. 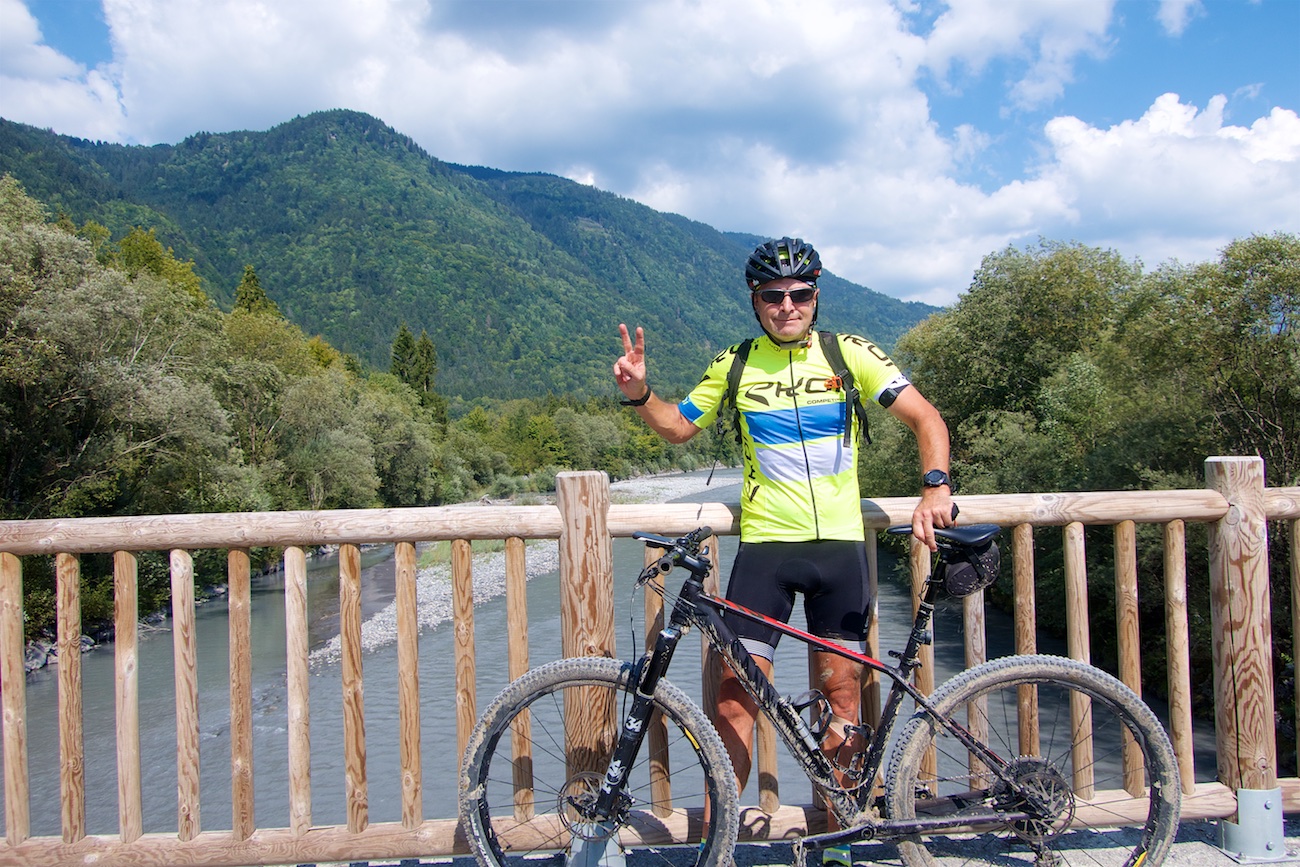