The Alpine borders between Italy and France are lined with forts and high altitude military roads – most dating from the end of the 19th century or World War 1. Forte Jafferau (2805 metres) is the highest Fort in Italy and the second highest in Europe. It was built between 1896 and 1898. It was bombarded and largely destroyed as part of the peace treaty ending World War 2.

The highest Fort in the Alps is atop Mont Chaberton (3131 metres) – cycling details here.

This is my second time cycling up Monte Jafferau, but this time I started in Savoulx, taking a hairpin-filled alternate route for the first 12 kilometres or so. I’ve marked both great rides on the map above. This ride (red route) is completely on unpaved gravel roads generally of good quality, although occasionally very bumpy/rocky. This requires a mountain bike.

For details of my other Jafferau ride – including descending “over-the-top” – see here.

The lower stretch is mostly a steady 9% or so winding up through the woods. This is the best surface of the ride. It’s superbly quiet, passing just a few old farm buildings, most of them long ruined. 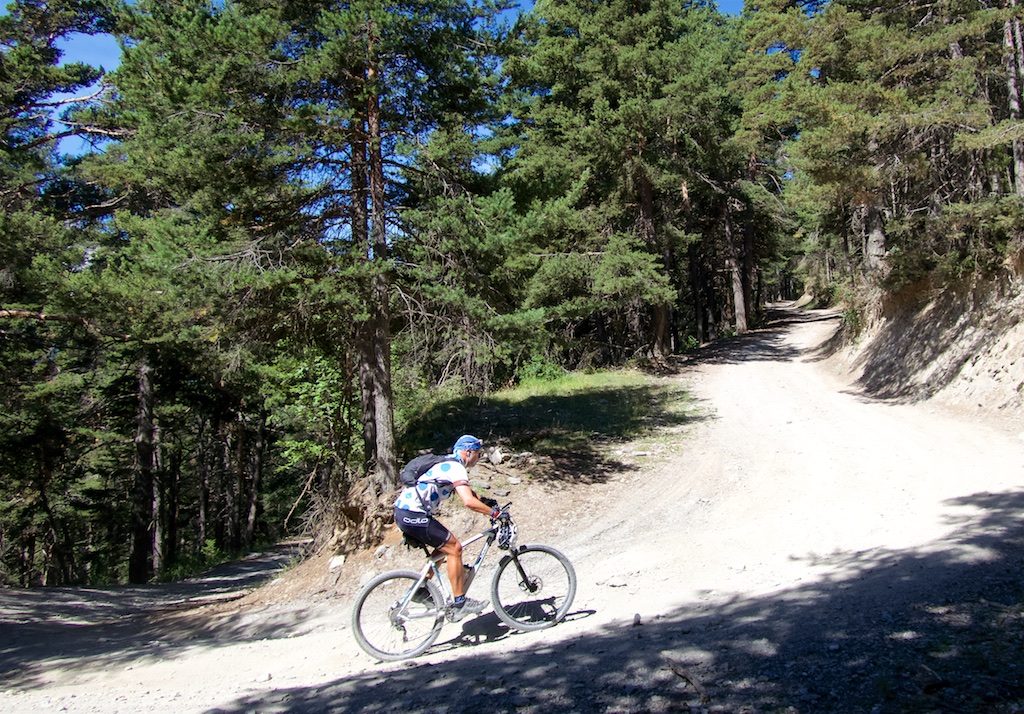 One of many lower hairpins through the woods

Slowly the woods start thinning. The steepest part of the ride – the one time I briefly walked – is just before the route joins my previous ride at roughly 2200 metres. The road then flattens out for a couple of fun ridge kilometres.

There is a third way up from Salbertrand, but it has been closed for a few years due to a collapsed 900 metre tunnel.

After passing the turn-off to the closed tunnel option, begins a great open stretch of road that winds up to Col Basset – 2596 metres. 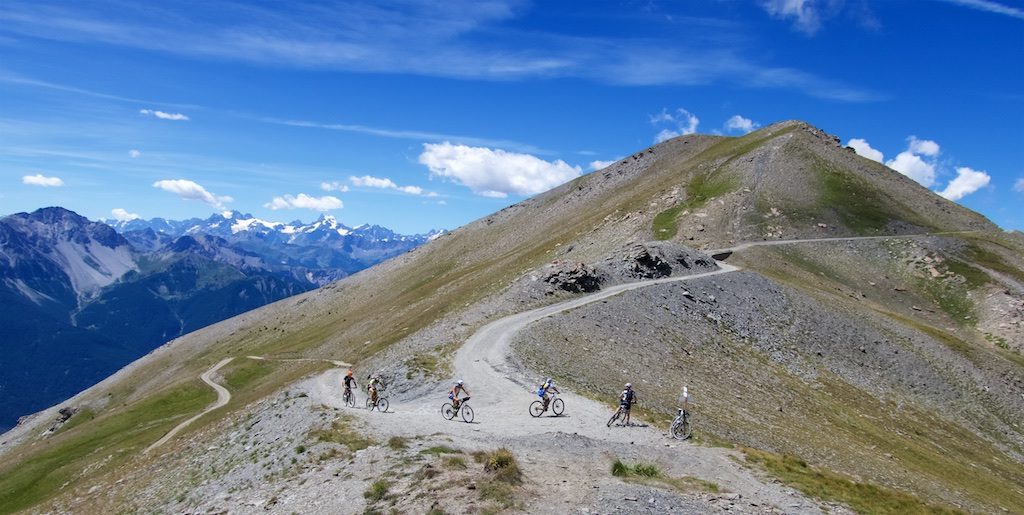 Cyclists at Col Basset, then the road heads higher

The next stretch is my favourite part of the ride, as the route takes a cliff road as it heads directly at Monte Jafferau. 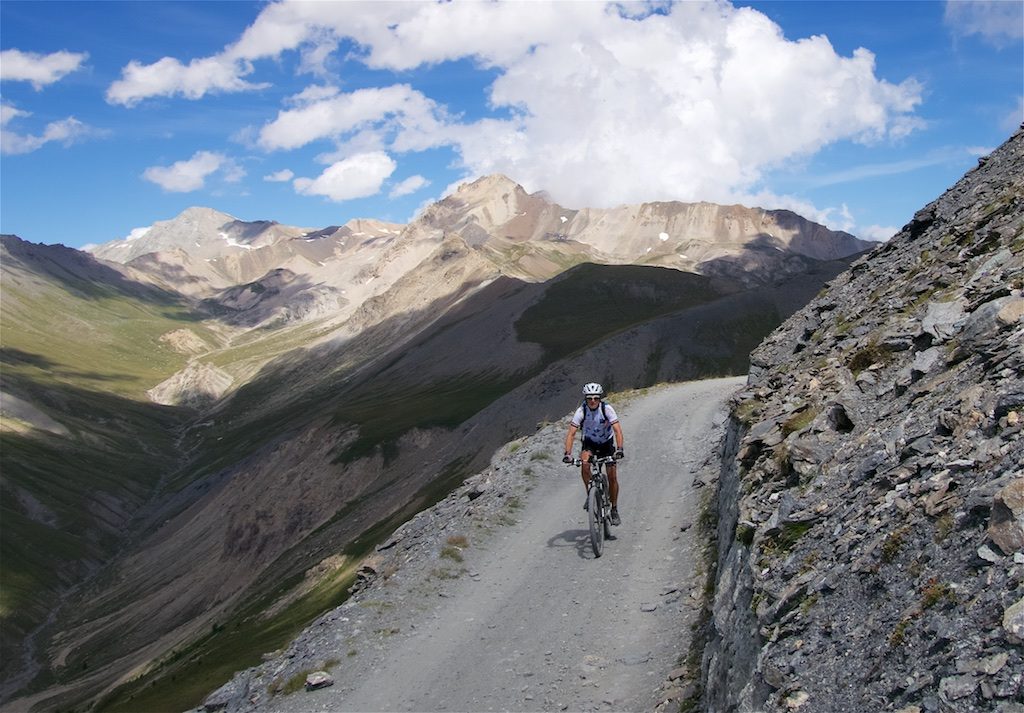 The final couple of kilometres to the fort at the summit of Monte Jafferau is a the worst surface of the ride. Hard jagged rock. Luckily not too steep. But the views at the summit are worth the effort. Truly fantastic. 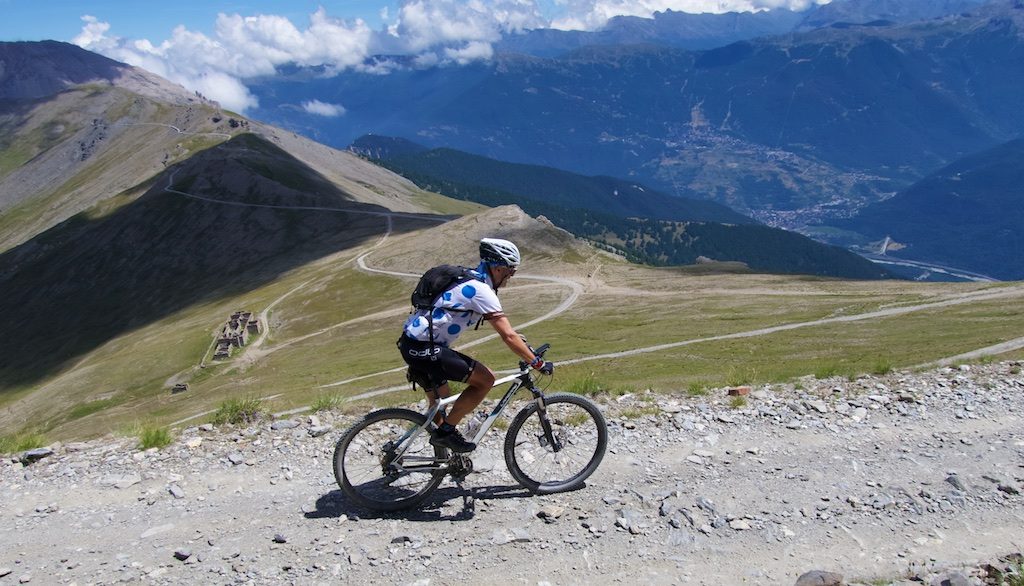 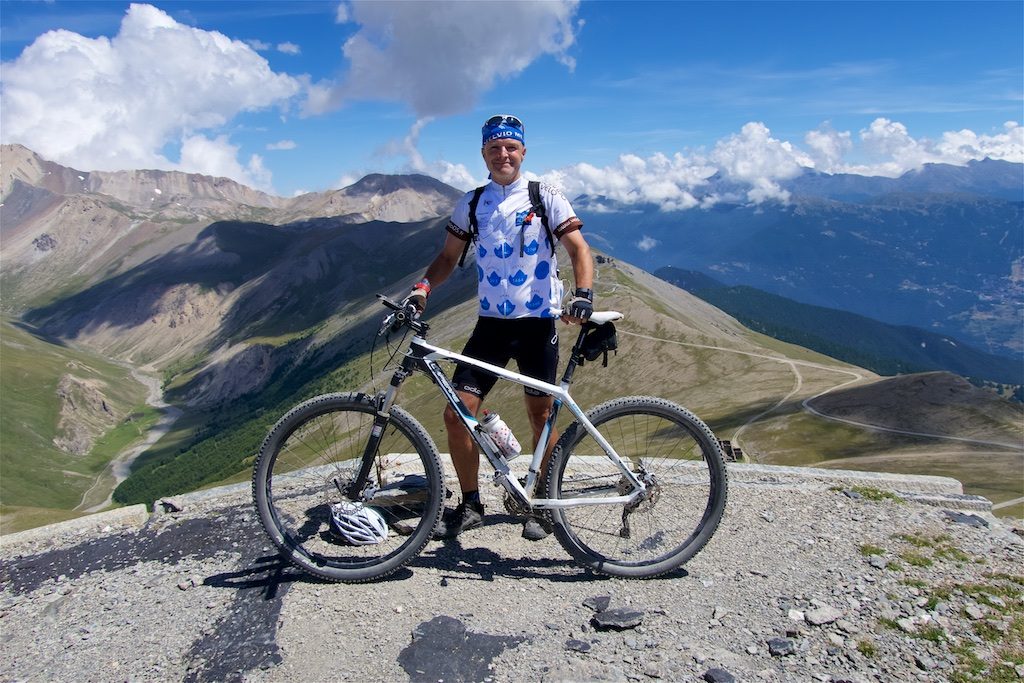 As I mentioned above, previously I descended the far side of the mountain. It’s basically a super steep, poorly surfaced, ski-lift service road. This time I decided I’d rather just double back. Far more scenic.

I loved this ride. Challenging, quiet, and beautiful in an undeveloped area. This region must be the best place in the entire Alps for super high, unpaved cycling opportunities. Nearby climbs include: