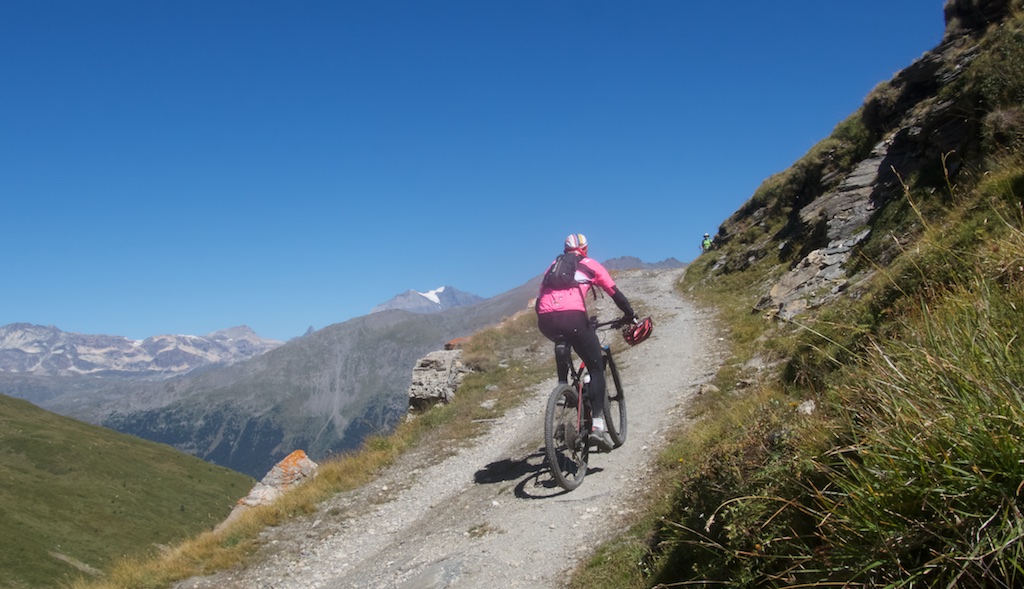 Note, as will be explained below, I DO NOT RECOMMEND the descent I took on this loop. I would suggest turning around at or perhaps a kilometre below Pas de la Beccia (2717m).

Perched strategically above Col du Mont Cenis and Lanslebourg, Fort de la Turra (2507 metres) was built in the 1890s by the French. It saw action in June 1940 during the Italian invasion. It was directly attacked by the Italians from Pas de la Beccia for several days. The Fort was surrounded but held out until the overall French surrender June 25th.

I started the climb in Lanslebourg beside the start of the paved climb (details here) to Col du Mont Cenis. But I turned immediately onto an unpaved road that leads all the way to the Fort. Fabulous.

Initially, the route climbs in the woods for several kilometres. 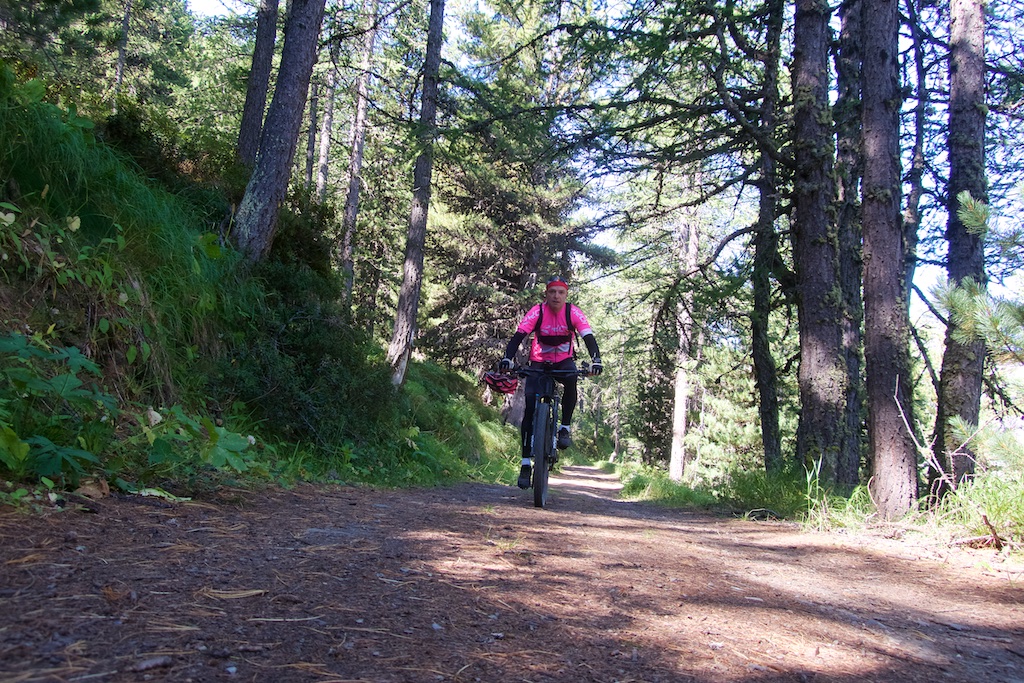 Above 2000 metres, the forest disappears. 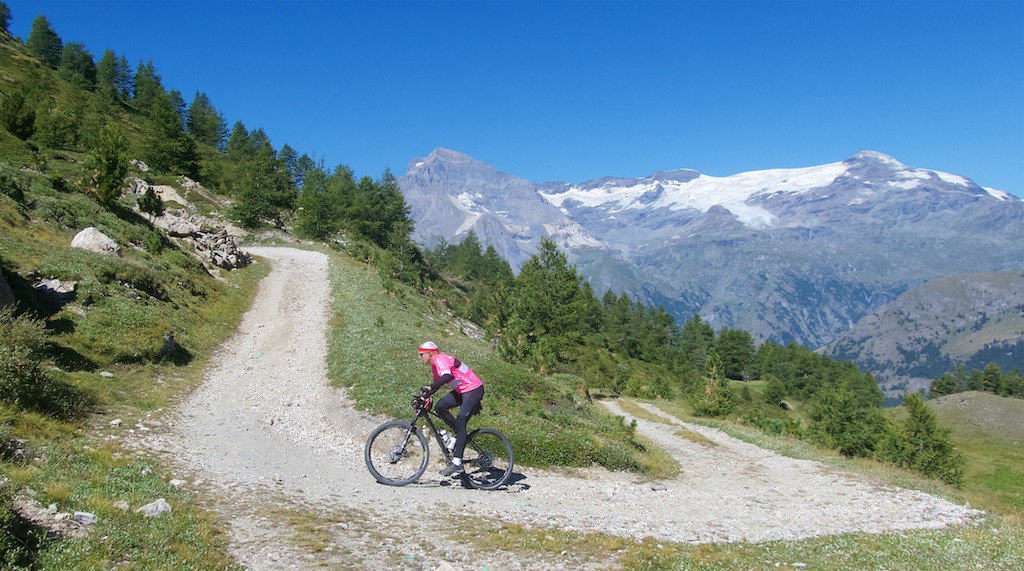 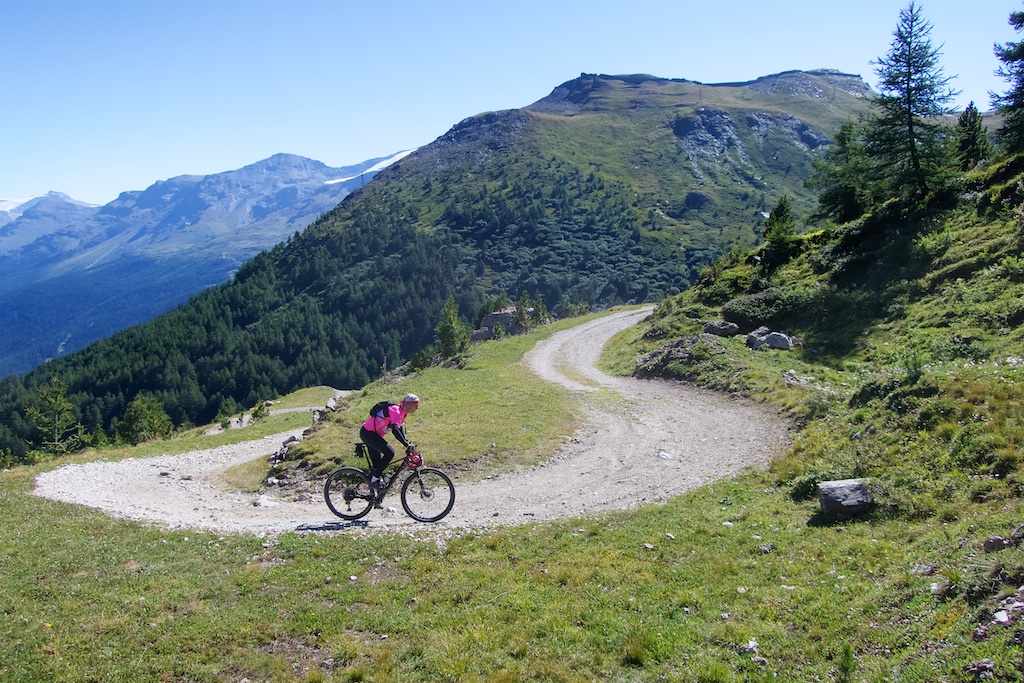 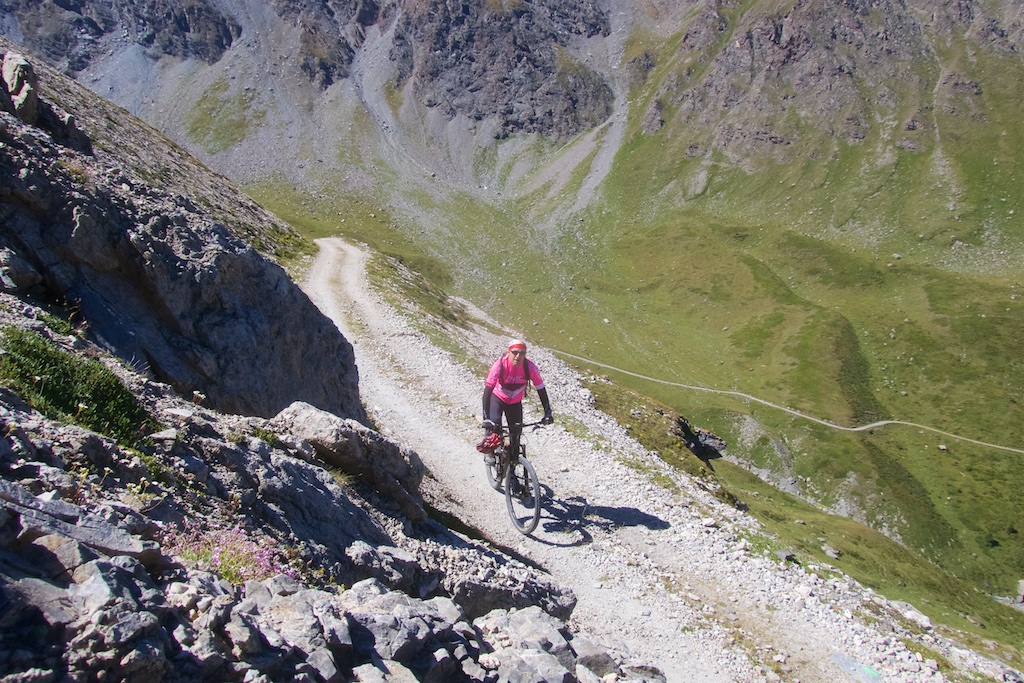 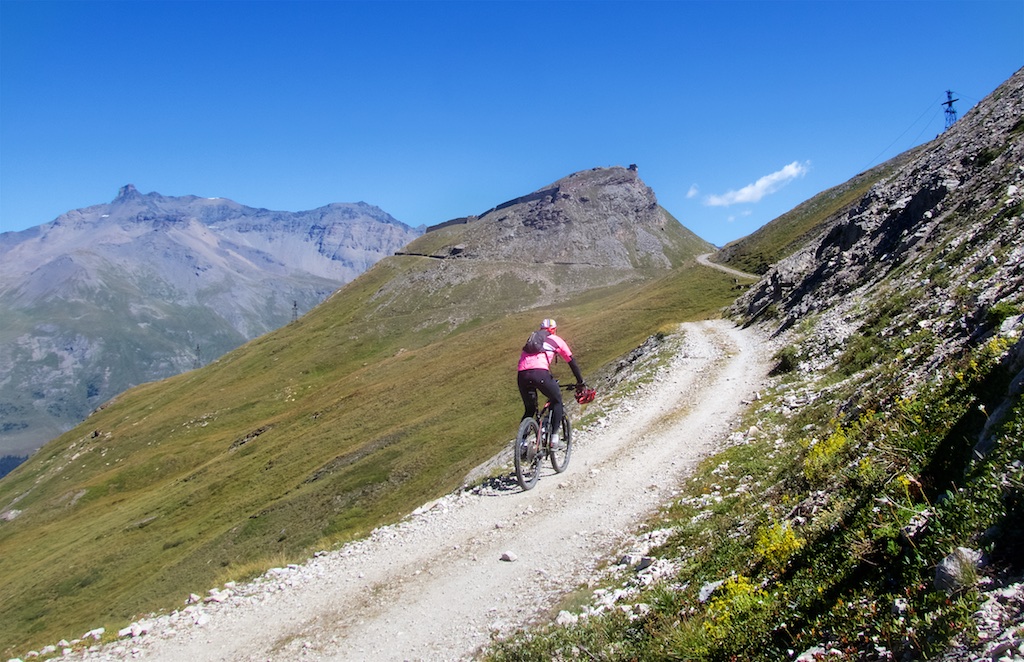 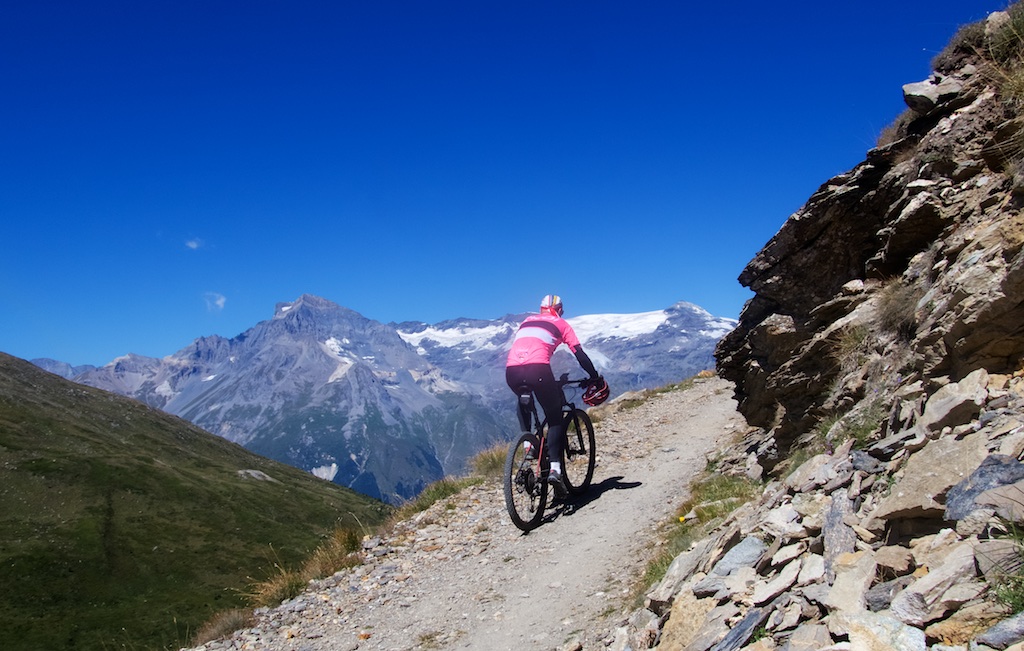 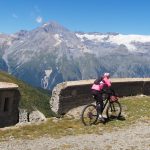 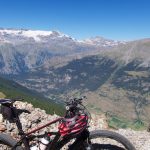 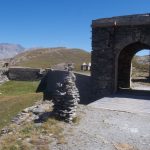 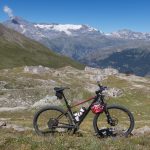 As the map below shows, from the Fort, the road continues up towards Pas de la Beccia (2717 metres). At first it is very rideable, but the last 1.5 kilometres becomes a well-used but occasionally very tricky hiking trail. Often I unclipped and walked: vertiginous and narrow. And even walking was dodgy because of the bike. 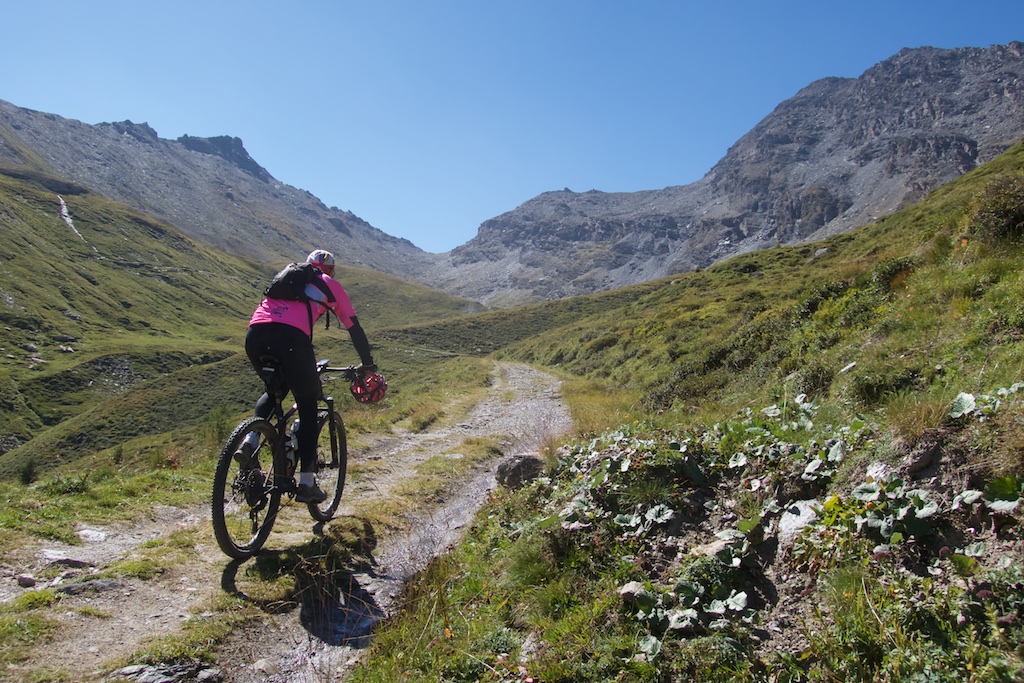 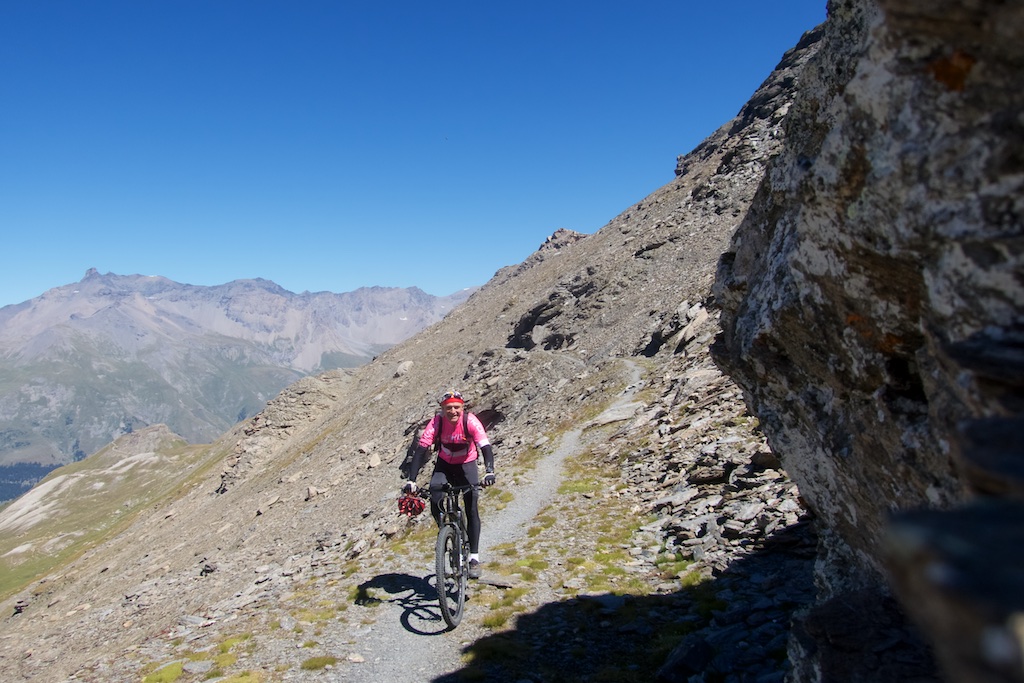 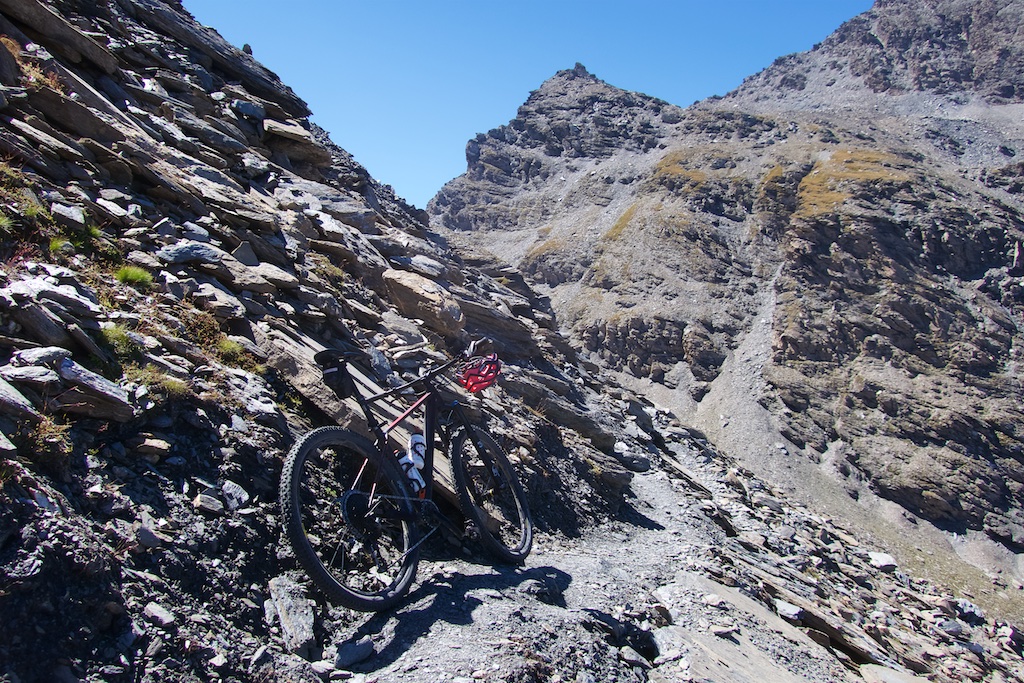 I am scared of heights, and was very careful, and successfully reached Pas de la Beccia. And WOW! The view is jaw-dropping, especially when one remembers that road-bikers cycle along way up (especially from Italian side) just to reach the lake far below: 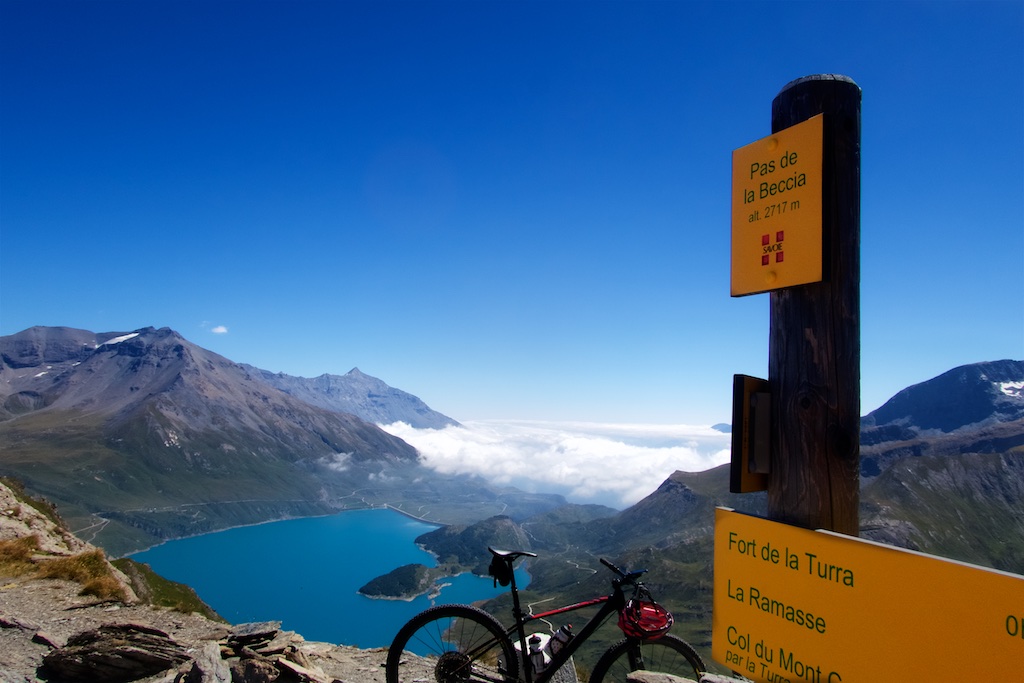 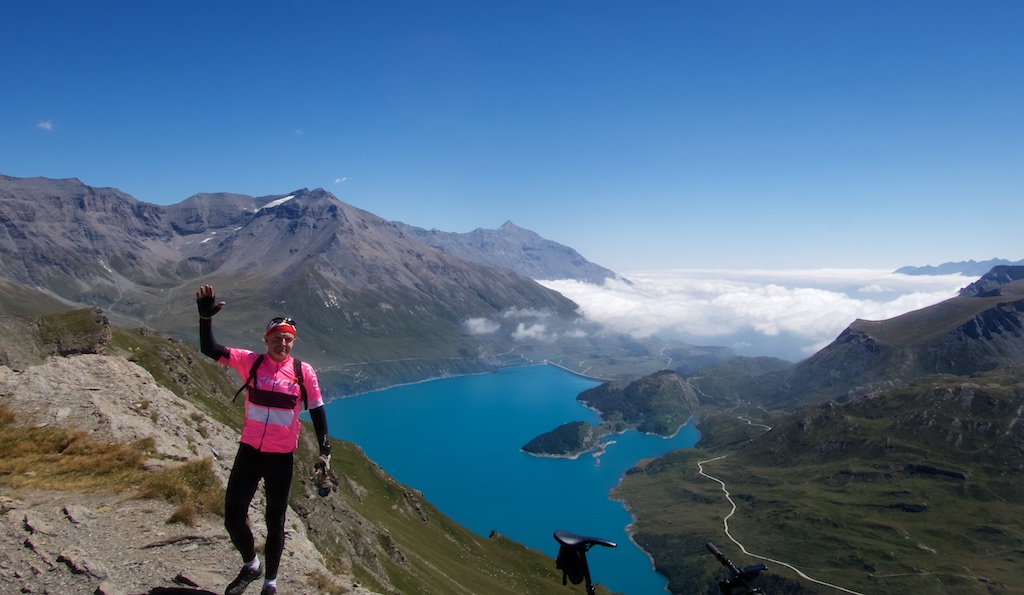 Dam on far side of lake visible in distance

The border with Italy is now beyond and well below the distant dam down the Italian side of the Alps. But right next to me was an old border stone. It was dated 1892, with Italy on one side and France on the other: 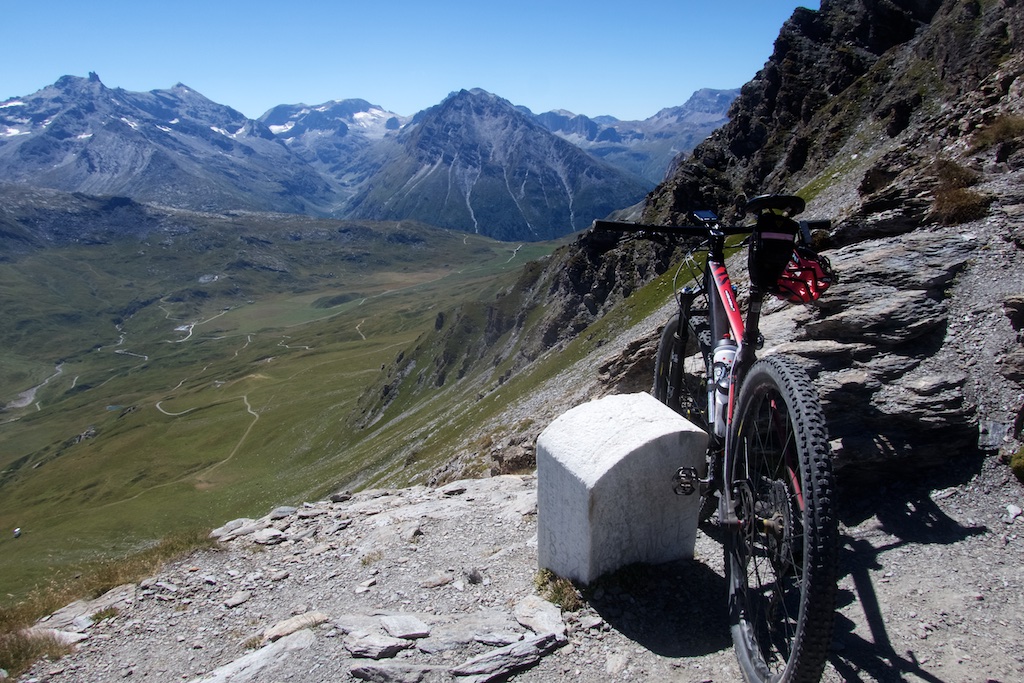 I had a bite to eat and savoured the views while I nervously looked down the far side deciding whether to continue. Frankly, I didn’t want to turn around and descend the previous kilometre. There were a few hikers coming up a well-walked path. So I decided to give it a go.

BUT I DO NOT RECOMMEND THIS. The hiking trail down to about 2350m is very, very steep and narrow. Completely unrideable – not even close. And nerve-wracking on foot while holding a bike.

I went very slowly, and very carefully, the highlight being admonished part way down by a couple of old, old French men for being a fool. Fair point. 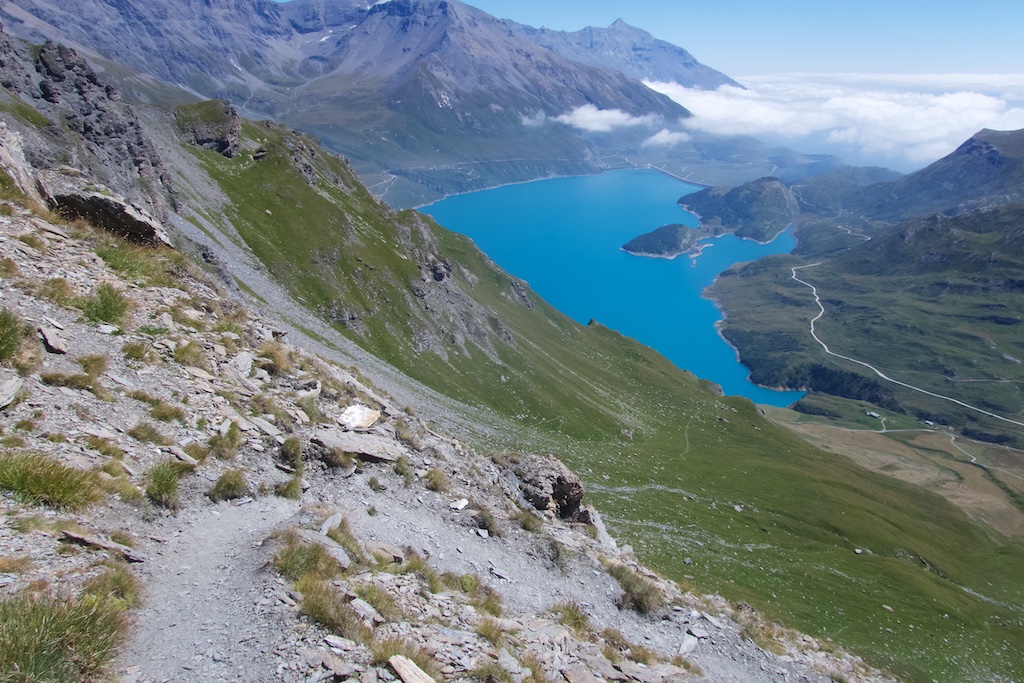 But eventually at 2350 metres or so, things became less crazy. I joined an old farm road after this nice cow granted me permission to traverse her lands: 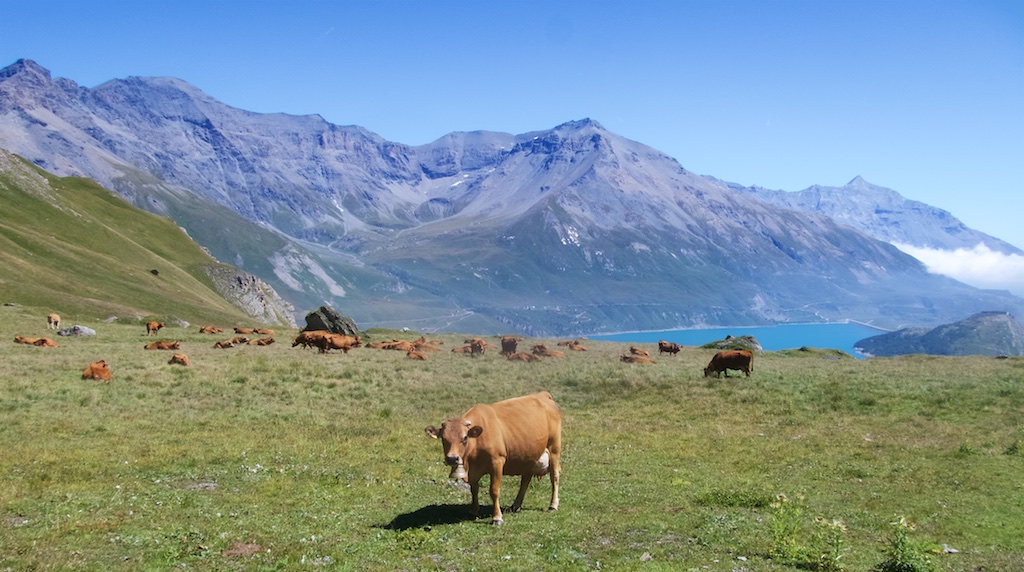 As I mentioned in yesterday’s post, I highly recommend any road bikers climbing Col du Mont Cenis to continue up this little side road to Petit Mont Cenis – 6 very scenic paved kilometres.

Finally, at Col du Mont Cenis I was tired and just descended the main road back to Lanslebourg. I saw loads of cyclists here (I saw none climbing to Fort de la Turra) and some August motor traffic. This just reinforces how much I enjoy quiet, unpaved “unknown” climbs like the one to Fort de la Turra.

I loved this adventure. The view from Pas de la Beccia is about as good as anything I have experienced with a bike. As I tweeted, I think half my favourite rides are old military roads on the Italian/French alpine border. But again, I want to caution everyone that the descent of the south side Beccia is not recommended. I’d suggest riding up to the Fort and perhaps hiking to Beccia, then turning around. 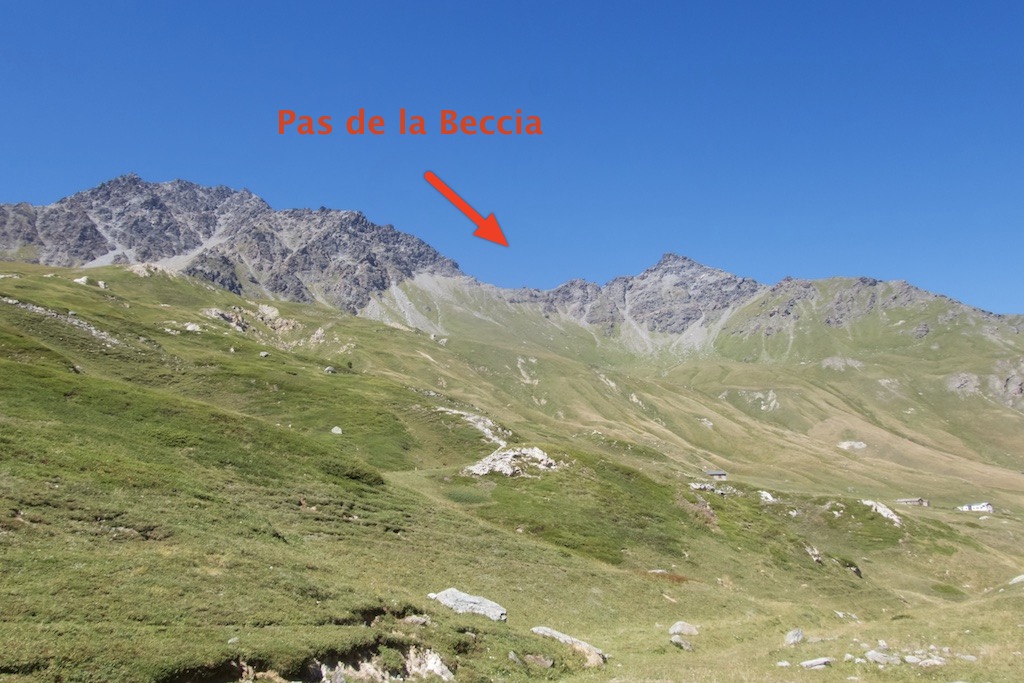 I’ll maybe do a post in the “off” season” about my favourite high old military rides – and some future ideas. But here are a few of the highest/best (all on/near France/Italy Alpine border): Mont Chaberton, Jafferau, Assietta/Finestre, Col de Tende, Alto Piano della Gardetta, Fort Janus,
Above Pt. St. Bernard, etc.