The goal was to climb another high alpine Piemonte unpaved military road, but I would get slightly lost. So, below, the blue track is my route, but the red track is what YOU should ride if you do this great route. I’ll explain below.

I started in Bardonecchia. Behind a sports complex parking lot, is an unpromising looking tiny dirt road entering a forest. It’s extremely steep at first but ride-able. After several hairpins, I came to an intersection with a fort clearly labeled in the other direction. I didn’t give it a second thought and continued following the GPS route I had programmed. Oops.

Bardonecchia, Italy – at the exit of the Fréjus Tunnel – is the start (or near start) of some of the highest uphill mountain biking in Europe. For example, Colle delle Sommeiller (2993 metres!), Forte Jafferau (2805 metres) both start from town. While down the road you can find Mont Chaberton (3131 metres!), Strada dell’Assietta (a dozen cols well above 2000 metres), and others.

I soon found myself pushing my bike up a steep ski slope with no end in sight. This seemed silly so I cut across on a signed mountain bike trail hoping to get around the above peak. Long story short, this just left me at the bottom of another ski slope. I was ready to give up, but decided to take the ski-lift service road up and see if I could find my military road. 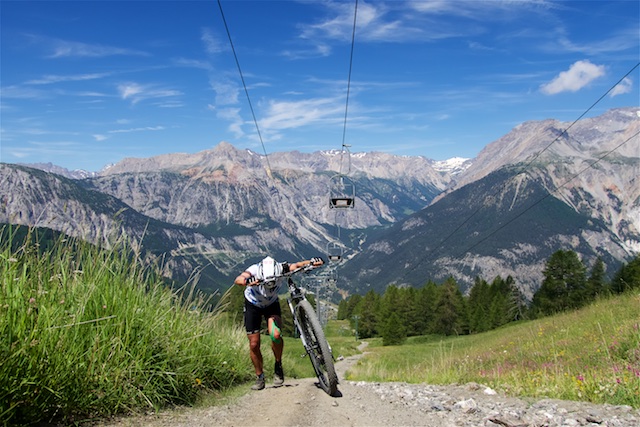 Luckily it was a nice day. I persevered, finally reaching a peak. I looked over the top, and lo and behold, there was my military road down the other side of the ridge – a short scramble away. And it looked great. Wooohooo. So please, avoid my stupidity, and TAKE THE RED TRACK ON THE MAP! 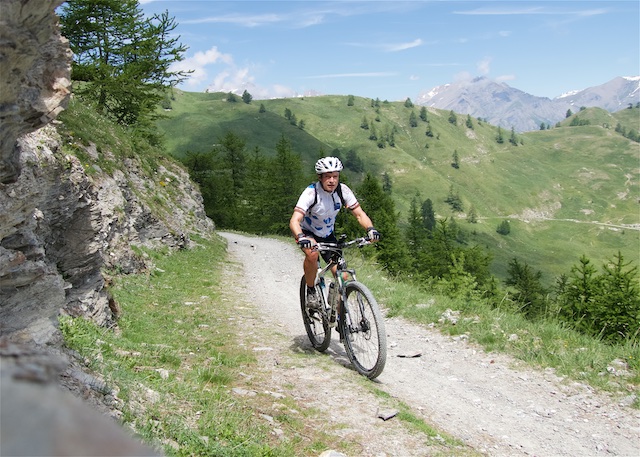 I came over the mountain behind me, while the correct road climbs from the bottom right.

I was much happier. What a fun road. 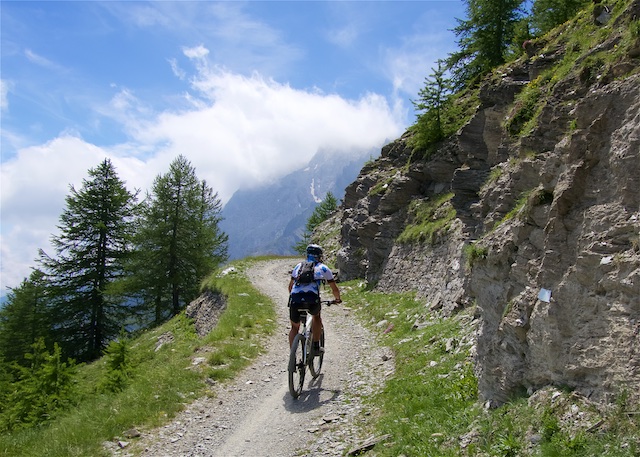 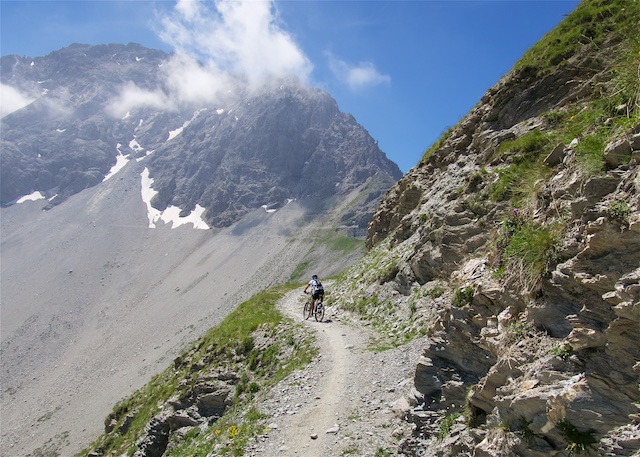 At the Col is a massive barracks, Caserma XVI, built in 1939. 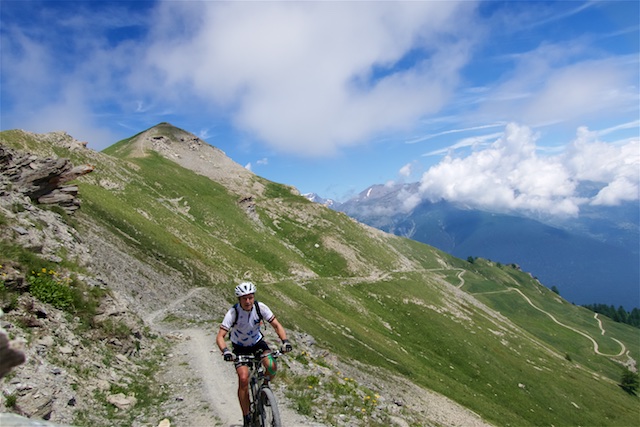 near the Pass, looking back

Passo della Mulattiera is at 2412 metres. A beautiful place. I was thrilled despite the mistaken route. Over the other side is unspoiled views of high peaks and a high altitude valleys. Next, I descended down to Col des Acles on a super fun trail. 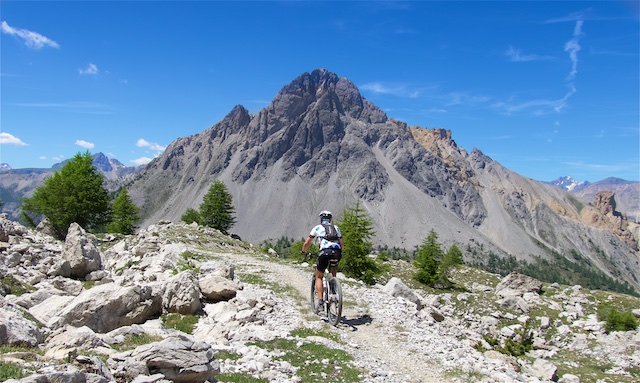 I briefly crossed into France, then back into Italy. At the Col des Acles sign was also an 1823 border post.

From here, I had a plan to try and get Col de Dormillouse far in the distance. It looked like a tough descent, and hard work, and I didn’t fancy climbing back to Mulattiera. So when I saw a sign to Colle delle Scala, I realised I could make a loop back to Bardonecchia. This next stretch is on a hiking trail, but often ride-able. But I soon realised it was a challenging hike even without carrying a bike, so I again switched to a hiking trail / road descending the same valley. This is technical, but a good rider could pedal the vast majority. 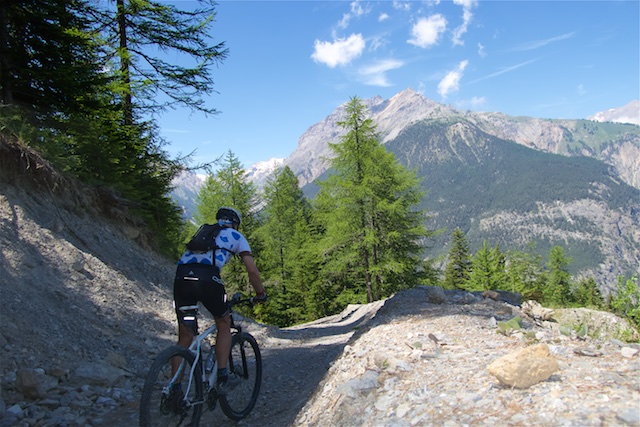 It’s a long way down. But I reached the paved road at roughly 1400 metres. Above where very sexy looking hairpins climbing the cliff. It’s a back way into France via Colle della Scala / Col de l’Echelle (Ladder Pass). I’d never climbed the Italian side, so I decided to do a quick up/down.

Like many passes on the France/Italy border, the WW2 Peace treaty signed in 1947 moved the borders to Italy’s detriment. So the Italian side of this pass is actually mainly in France. The border is at the little lake/dam at the start of the hairpins.

This is not a tough or long climb, but it’s beautiful. And for cyclotourists, it is a FAR better way to enter France than Col de Montgenèvre down the road. A few photos. 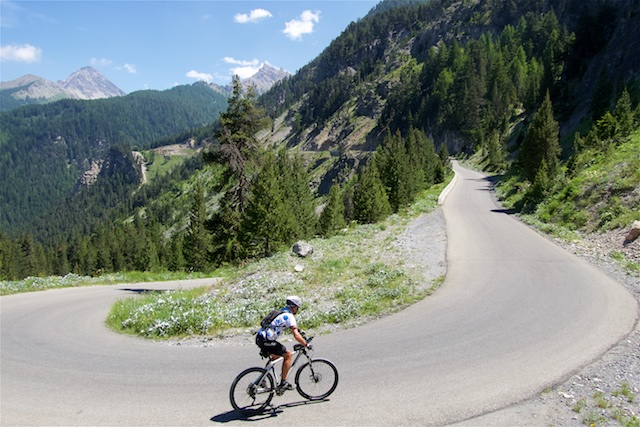 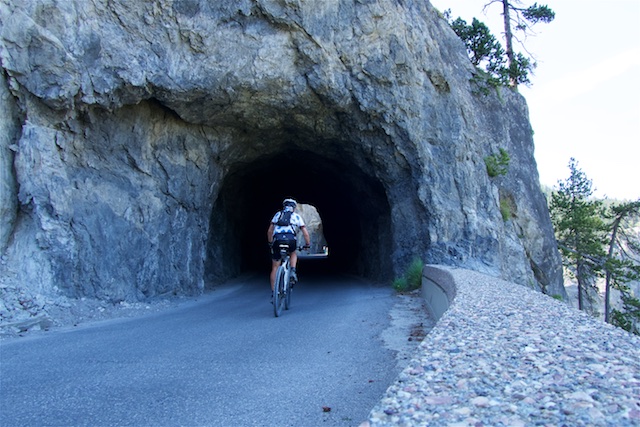 This is a beautiful loop – although my route mistake made it harder than necessary. I’d love to hear from anyone that has done the red track – but I am fairly certain it would be perfectly ride-able.