Above: view from Pic du Midi. Lac d’Oncet (2253 metres) below and the road above Tourmalet.

I’ve dreamed of doing this forever. Climb Col du Tourmalet, the most famous pass in the Pyrenées and then go much higher on an unpaved route to the towering Pic du Midi de Bigorre.

I started in Luz-Saint-Saveur, the bottom of the west side of Col du Tourmalet. I think this is the more scenic side (vs the La Mongie atrocity of a ski station on the east side).

While the road goes up from the start, it doesn’t really get interesting until about halfway after passing the town of Barèges.

Note, at roughly 10kms the route splits. There is a smaller road to the road now called the Voie Laurent Fignon. I suggest taking this. It’s the way the Tour has usually climbed. And even better, after the bridge, it’s closed to cars – a nice respite.
After less than 4 kms it rejoins the main road. As per the map above, I climbed this segment and descended the main road.

After rejoining the main road and looking up, I could see Pic du Midi – my goal – high in the mountains. I’d been riding for an hour and yet still had a very long way to go (pic includes a friendly stranger):

The last kilometre before Tourmalet is easily its toughest:

My previous two times up Tourmalet were too early in the season to see Le Géant du Tourmalet, so I was excited to get my photo with him:

After some refreshments, it was time to get to the real work at hand. The road up to Pic du Midi starts exactly at Col du Tourmalet. You cannot miss it beside the gift shop. It starts off with a few not-too-steep kilometres and a very good gravel surface.

Lots of nice views of the Tourmalet road:

A view of Pic du Midi about 5 kilometres from summit (just before the really tough stuff started):

After about 4 kilometres the route reaches Col de Sencours and Lac d’Oncet beside it to the right. View from above:

From this point on things get harder. It’s steeper and the quality of the road deteriorates (slippery with lots of big stones).

But wow, it just keep getting funner and funner the higher it goes: 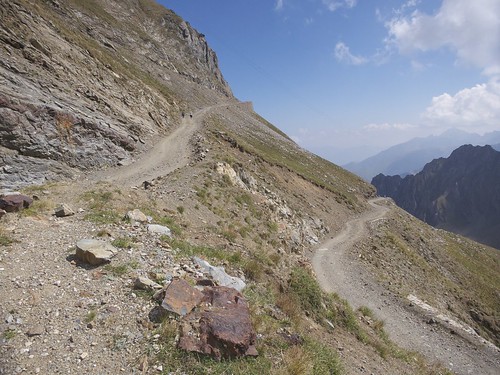 There is approximately 1 kilometre of hiking to be done and I carried the bike the entire way. I am not sure how steep it is, I put 24% on the profile given some GPS data, but I don’t know. The lower stretch isn’t terrible but it just gets harder.

But I wasn’t going to quit now. Time to hike:

I will say it’s easy to get in a conversation with anyone when you are carrying a bike in a place like this. So I chatted and rested a couple of times on the way up.

This is easily on my list of top 5 days on a bike. Unbelievably fun.
9.9 Awesome

Maybe the best day ever on a bike. Woooohoooooo. If you get the chance. Do this ride.