Update: This article originally had 7 climbs but I have visited a few more places since it was first published in 2013.

Nordic (Cross Country) Skate Skiing may be the perfect work-out. Not surprisingly, near Geneva many of the best locations are at the top of interesting cycling climbs.

It’s been a cold, snow-filled, fantastic winter so far. And while I have a fairly good track record of doing freezing, icy, snowy, silly winter cycling climbs …. this winter I decided to focus on cross country skiing for a change. I purchased a Rhône-Alpes Region Nordic Skiing Season Pass and it has been getting good use (link to the official Rhône-Alps Nordic Skiing web site and all 83 locations).

Here are fourteen tough cycling climbs with great skate-skiing at the summit in winter – all within an hour of Geneva (see map below for locations). Feel free to suggest any I may have forgotten.

The Morzine side of this famous cycling climb is used as a ski slope in winter and thus closed until May. But when the weather gets warm and the cross country ski trails in the valley close, they occasionally open the road to Joux Plane from the more famous Samoëns side. This also means the road is “open” for bikes (leave the road bike at home).

Here is a post where I cycled up to Joux Plane and rented XC skis at the Col.

My favourite location. Two challenging black / red routes surrounded by mountains and next to the Monument National de la Resistance.


At 1844 metres, Col de Pierre Carrée is the highest paved mountain pass open all year near Geneva – servicing Flaine ski station. Many nearby lower passes (eg. Col de la Colombière at 1613 metres) are closed for 6 months or so.

At the Col itself, on the little golf course, is a small but very scenic Cross Country Ski centre. It’s a superb 21 kilometre cycling climb too: details here.

More than 100 kms of trails at all difficulty levels. Half the trails on a high, beautiful plateau, and the other half through mountain forests – leading to a fabulous Mont Blanc lookout.

With 150 kilometres of trails, Savoie Grand Revard nordic ski centre is huge. It has plenty of trails of all difficulties – almost endless challenges.

A few kilometres above La Clusaz ski station in the Aravis alps is the well situated Les Confins nordic ski centre. Take the black trail up to some fabulous views (photo above). Les Confins also has a very difficult trail linking it to Le Grand Bornand below – which also has a biathlon track and some nice trails.

Col des Confins is a steepish 6 km cycling climb that can be combined with some of its more famous neighbours such as Col de la Colombière, Col des Aravis or — see here — Col de la Croix Fry. 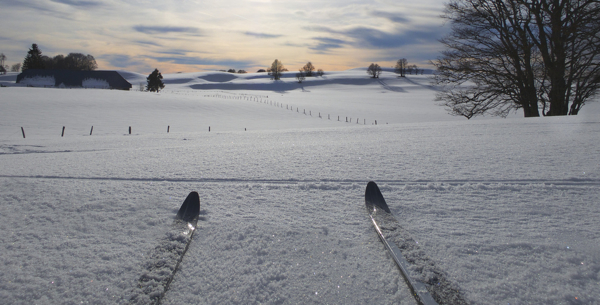 In the Jura mountains above Bellegarde, Plateau de Retord has more than 100 kms of trails of all difficulty levels.

The main entrance is at Col du Cuvéry, a medium sized, quiet cycling climb that can be combined with other nearby cols for some fantastic cycling. Examples here.

Praz de Lys ski station has cross country ski trails that allow skate-skiing up to Col de la Ramaz from either side (Sommand or Savolière). Surrounded by high mountains, it is a perfect location.

Col de la Ramaz is a challenging cycling climb from either side. The west side appeared in the 2011 Tour de France. Here’s a fantastic cycling loop that includes Ramaz and Joux Plane

Le Semnoz is the mountain on the west side of beautiful Lake Annecy. It’s the highest road-bike cycling climb in the area.

This is a seriously steep 13 km cycling climb on the north edge of the French Alps. It’s never been in the Tour de France but did host a mountain top finish in the 2014 Tour d’Avenir. Cycling details here.

Thanks to Chris (see comments), I have now added this Swiss Jura station. A beautiful trail links all the way to Marchairuz. There is an entrance to the pistes at either end. Not tooooo hilly, this was my longest session ever – testing my mediocre skating technique.

At the end of a steep little road above Col de Chatillon sur Cluse, the Cross-country ski centre of Agy is perched on a ridge at about 1300 metres with views of the Alps in 3 directions.

In the same Jura massif as the 4 amazing routes up the formidable Grand Colombier is the scenic little cross-country centre Sur Lysand. In fact, the trail-head is most of the way up the also very steep road to Col de la Biche.

The Cross country skiing gets as high but a little short of the Col, but does a loop around Croix de Famban with great views of the Alps in the distance. Cycling details here.

The map below includes the above fourteen locations and a few more in the region.

View Cross Country Skiing Near Geneva in a larger map