One doesn’t cycle as much as I do without a loving and supportive wife. Doreen prefers running – and has a marathon under her belt. But she has cheerfully tolerated endless cycling trips and often bravely “attacks” some of the biggest climbs in the Alps. 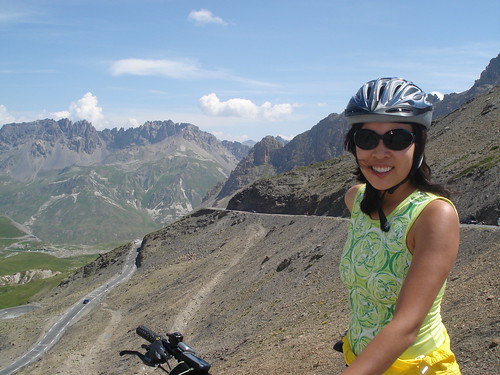 So I proudly present the 10 best climbs cycled by my wife! 😉

In fact she’s done each side, but last summer’s perfect ride with friends up the classic north side was one of our funnest rides ever.

The road signs proudly claim this as the highest road in Europe. In fact, there are a couple of paved roads slightly higher in Spain and Austria.

Doreen joined us for the last few days of the Tour d’Enfer in 2008. And while all us “want-to-be”s rode fancy carbon bikes, she cheerfully reached the summit on her old, heavy touring bike.

On a beautiful May day a few years back, it was just us and a bunch of Dutch cyclists on the Alpe. While eating pizza at the top waiting for the girls, I was impressed to see that my wife beat the Dutch guy’s wife. 😉

In June, while Philippe and I did a Ventoux Cyclosportive, Doreen had breakfast at a café in Bédoin, cheered us as we passed …… then proceeded to climb Ventoux herself. Chapeau!

For more on Ventoux see here.

Despite bigger climbs on her list of accomplishments, Doreen will swear that Colombière is the hardest climb she’s ever done. Perhaps due to the brutal last three kms or the fact that it always seems to be against the wind.

The highest paved Col in France (The top of Bonette is above the Col). Another favourite ride of ours.

For more on Iseran see here.

A beautiful south Alps climb. One of our favourites.

We’ve happily done this a couple of times.

For more on Allos see here.

In between Bonette and Allos, this very high Col is a wonderfully long and easiesh ride. Doreen had a flat tire near the top and despite the efforts of 6 of us, no one could fix it.

While she waited under threatening skies, we had to descend back to Barcelonnete and fetch the car. Apparently, friends tell me, it’s the fastest I have ever descended.

For more on Cayolle see here.

One of the most famous climbs in the Alps. On a perfect sunny day, Doreen climbed the south side.

I awaiited her at the Napoleon house near the top with ice cream as a reward.

For more on Izoard clicke here.

One of the best rides up past an alpine lake/dam.

For more on Roselend see here.