Trending
You are at:Home»Alps»The 10 Best Rides of the Year

I had the good fortune to cycle some great roads in 2016. As in recent years, I continued leaning towards high Alps mountain biking versus road biking. But this list has some of both.

Similar to last year, I especially enjoyed several super high, old, Italian/Piemonte military roads along the French border. Anyway, here are my ten favourite rides of 2016. All ride links include maps, profiles, and more photos than you probably want to see,

Colle Fauniera is the 5th highest paved road in Italy. Mountain Higher author Daniel Friebe described Fauniera as “maybe the most alluring and unspoilt pass around 2500 metres in the Alps.” Indeed. The ride includes probably the least well known of the 3 paved routes to Fauniera – (here’s a link to a post where I cycled the other two sides) – they are all huge, quiet, and stunning. But the highlight of the ride? The loop also includes 10 (!) more high passes, most traversed along a fabulous unpaved old military road behind Fauniera through the Altopiano della Gardetta. Details here.

In south-eastern France, this 111 kilometre gorgeous gorge ride includes two loops: The bigger loop rides around both sides of this truly unbelievable gorge, while the interior loop climbs the Route des Crêtes, basically a mountain towering over the gorge. Details here.

OK, yes, I was descending here.

Colle del Nivolet is the third highest paved road in Italy. More importantly, it might be the most beautiful paved climb in the entire Alps. The final 15 kilometres hairpin past several lakes/dams. Paradise in the Parco Nazionale Gran Paradiso. Details here.

still a long way to go, but getting great

At the beginning of Nivolet I also climbed the steep, quiet, “secret” climb to Lago di Teleccio. I highly recommend including it during any visit to Nivolet. Details here. 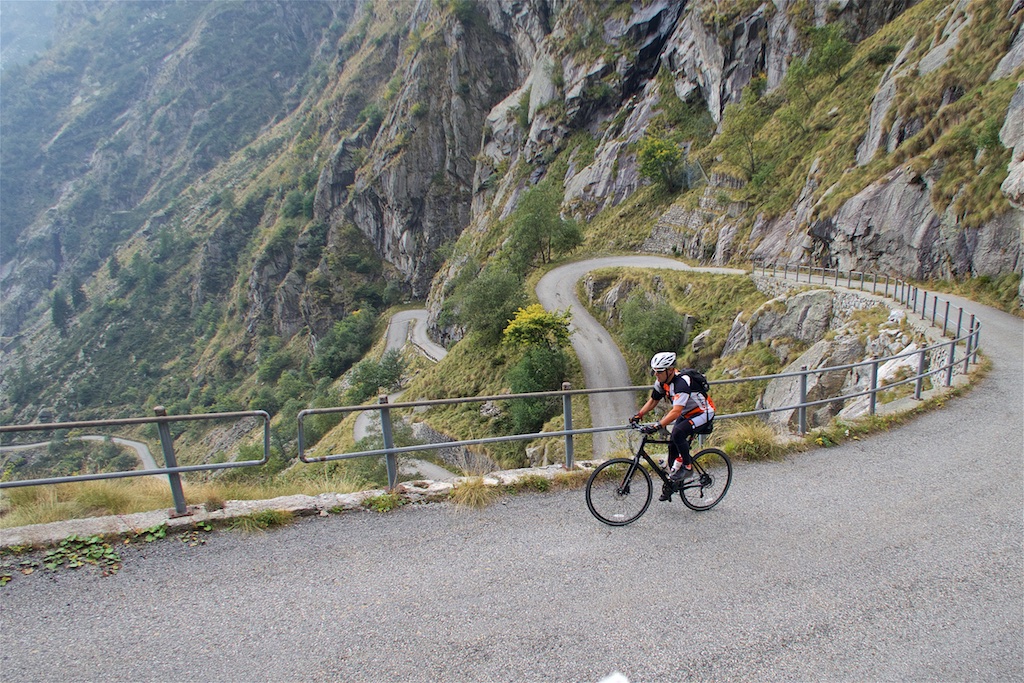 Road to the Diga (dam) and Lago di Teleccio

#4 Colle delle Finestre and Above

The Strada dell’Assietta / Finestre might be the best network of high, gravel, old military roads in the Alps. This post explains the above ride plus several others here.

Colle dell’Agnello (Col Agnel in French) is the third highest paved mountain pass in Europe. In the Cottian Alps, the summit is the border between Piemonte, Italy, and the Hautes-Alpes, France.

I’d cycled the French side, but never the very challenging Italian side, and 2016 was the perfect time as it was cleared of snow weeks earlier than usual for the Giro d’Italia. I visited two days before the pros. Details here.

A Beer atop Colle dell’Agnello 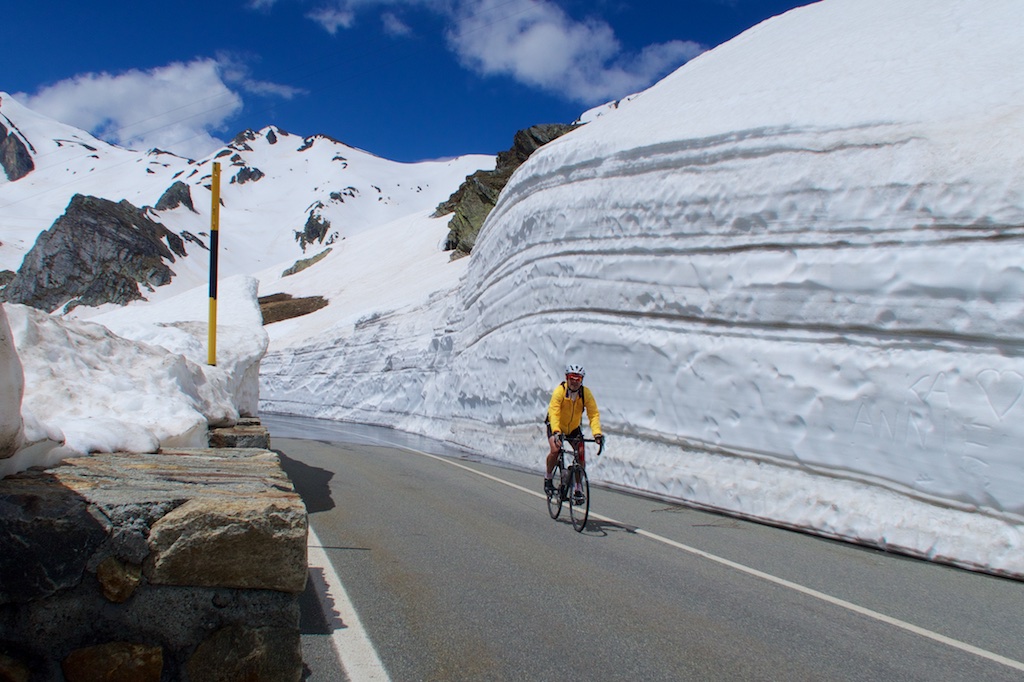 #6 Grosse Scheidegg and Above (Bachalpsee)

In central Switzerland, Grosse Scheidegg is one of the most beautiful paved climbs in the Alps. But exactly at the summit, one can go further/higher on a good quality unpaved road. This loop – featuring non stop views of the Eiger North Face – reaches the stunning Bachalpsee then follows a super fun descent through a tourist-free high valley – just me, cows and mountains. Details here.

Here’s a 3D video of the ride. 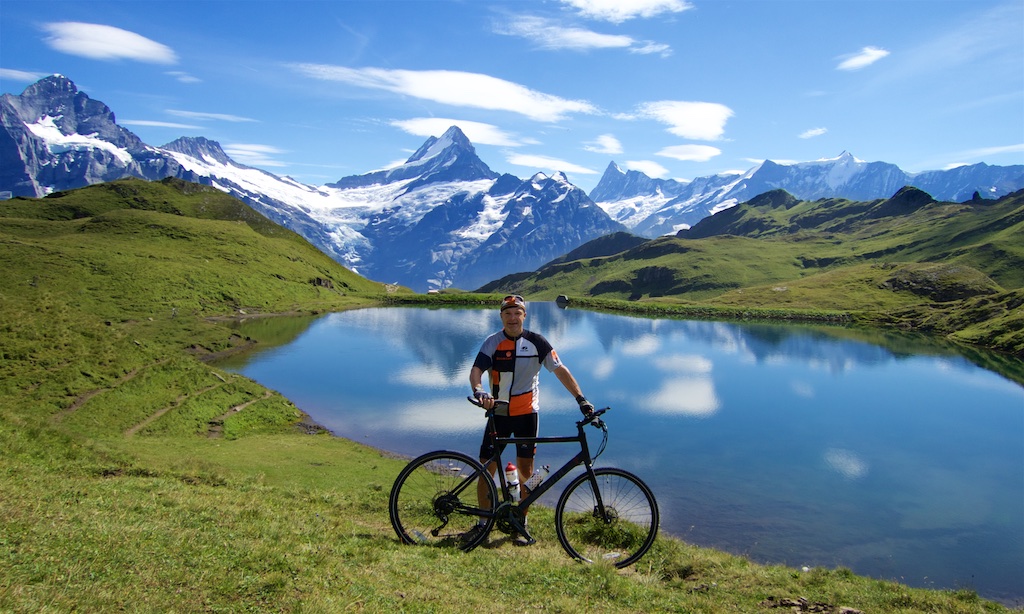 The day before the above ride I cycled to Kleine Scheidegg – under the Eiger – also recommended. Fantastic. 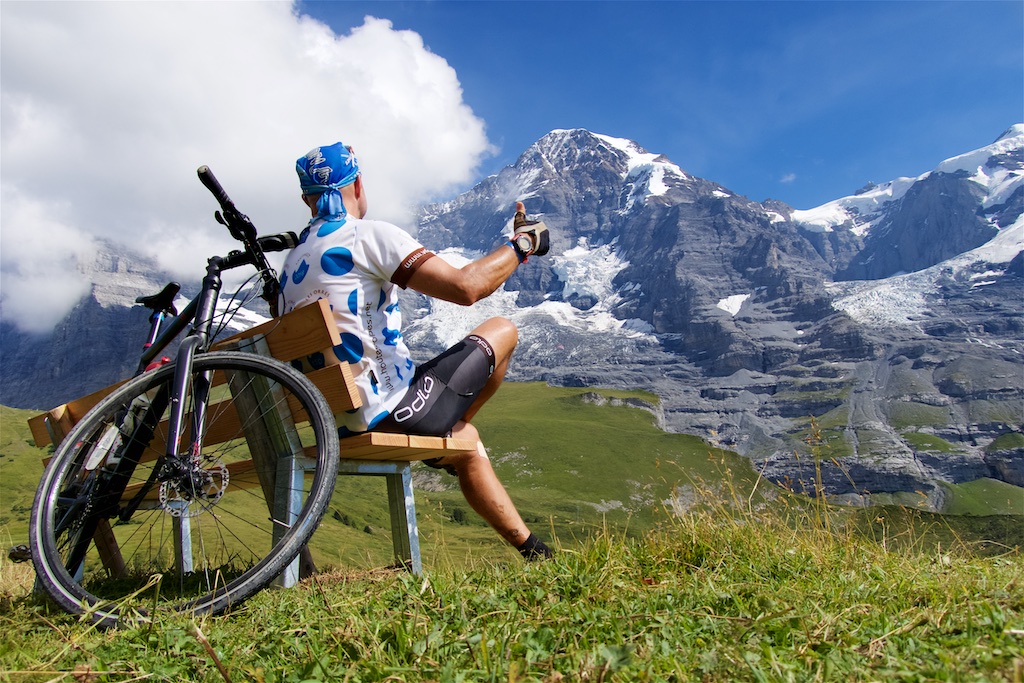 A great bench near Kleine Scheidegg 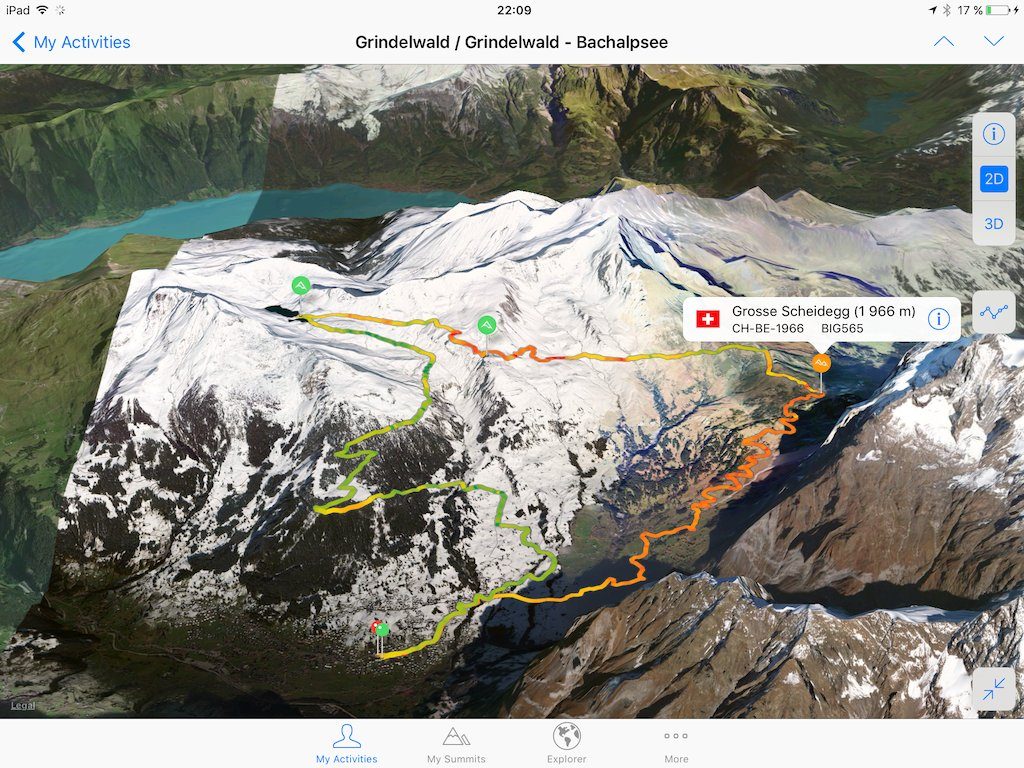 Yet another fabulous col that summits on the French/Italian border – but here it’s the French side that astounds with 46 hairpins in just a few kilometres. This ride climbs both the Italian and French sides but also visits a couple of forts and a few more passes by riding along ridge roads in either direction from the summit. Details here.

This was my second time cycling to Monte and Fort Jafferau – the 2nd highest fort in the Alps (2805 metres). But I took a different route for the lower half this time. This is a huge, beautiful, deserted gravel climb in a region (Northern Piemonte) full of such roads. Details here.

Cyclists at Col Basset, then the road heads higher

Chamonix is sometimes called the adventure capital of Europe. But it’s actually terrible for road-biking (no roads higher), and not great for Mountain Biking (up). But this loops starts in town, almost completely avoids paved roads and has glacier views throughout. Col de Balme (2204m) is on the Swiss border. Details here.

Above Briançon, on the road towards Col de l’Izoard is a turn off to an old military road that climbs to Col des Gondrans. At 2347 metres, wikipedia will tell you it’s the 11th highest paved road in France (but I found it rather bumpy). I never saw a car. Crossing over the Col appears the impressive Mont Janus and a “road” to an old fort atop (2529m). Wow. Details here. Note, the ride in the link begins with a crazy-fun little climb to the Croix de Toulouse – 29 hairpins!.

As I went through my 2016 rides I kept coming back to rides in Piemonte Italy. In fact, if I did a top 15 list, I’d add a few more from the region. It is certainly not as famous as the Dolomites, or the biggest French climbs in the Maurienne valley. But it is full of higher, FAR quieter climbs – both paved and unpaved. And from Geneva it just a couple of hours by car. I highly recommend a visit.

See here for a map of Piemonte and Aosta climbs including many more rides not on the above list, in particular a couple that will get you to 3000 metres and above: Colle del Sommeiller and Mont Chaberton.