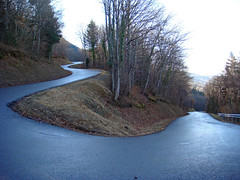 They just announced the route for the 2008 Dauphinée Libéré and the course looks fantastic. This means it has lots of climbs.

The race will take place from June 8th to June 15th and is used by many teams as a major warm-up before the Tour de France.

The final four days are full of climbs – this will be an exciting and challenging race – featuring legendary climbs like Col de Joux Plane and Col de la Croix de Fer.

But for me, the most exciting part is that stage four will feature the climb behind my house. Up to the Col de la Croisette.

Yes, the Dauphinée will climb Le Salève up the super steep route from Collonge-Sous-Salève. It is rated category one but features 4 kilometres averaging 12% – with a full kilometre averaging 13%. This is steep! Legendary climbs like Alpe d’Huez or Galibier don’t have anything even remotely as steep as this. It will be painful and exciting.

Le Salève is the Massif overlooking the South-west side of Geneva. There are numerous ways to cycle this mountain, but the Dauphinée has picked the toughest – by far. Up top there are thrilling views of Geneva and the lake on one side and the entire French Alps on the other.