One of the more amazing cycling trips I’ve ever done. A three day loop around the Mont Blanc Massif by mountain bike through France, Italy, and Switzerland with endless glacier views. Paradise. I rode with my friend Alfie, the President/King of the Steel Wheelers, my local cycling club.

WARNING! This loop requires LOTS of bike carrying – both uphill and down. Much of the route, especially the higher slopes, are on steep, rocky, difficult mountain terrain. It’s often completely unrideable regardless of how strong a cyclist you might be. But, many of my favourite stretches along this stunning circuit were along these unrideable parts. Our average moving speed on Day 1 was barely 6 km/h. 🙂 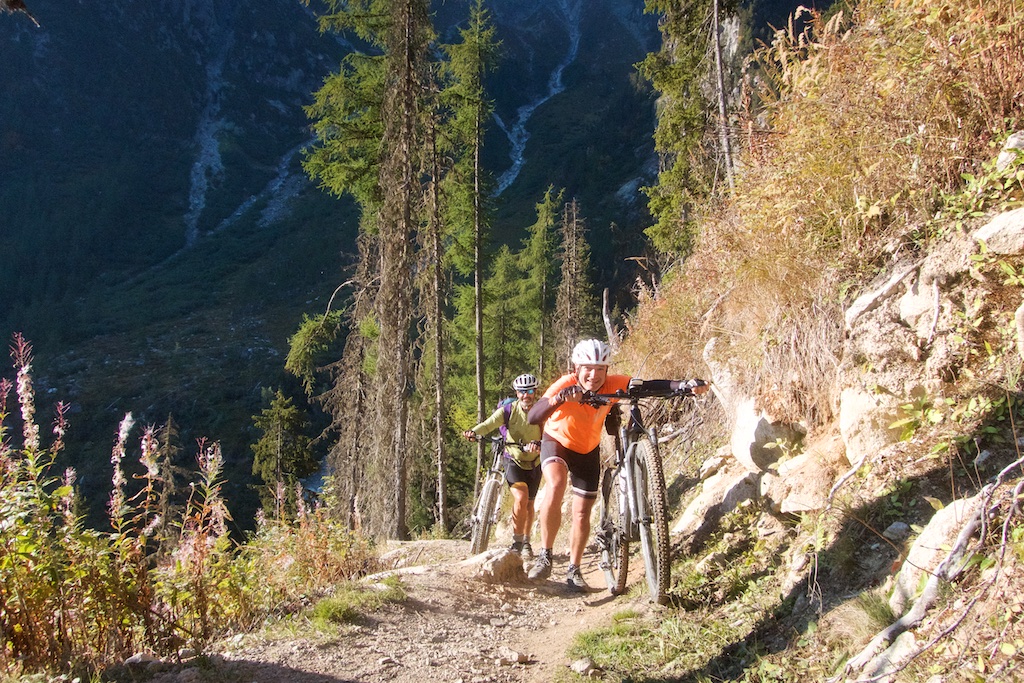 This post will detail day 1 of our 3 day trip. At the bottom of the post is a second map showing the entire 3-day route. As usual, there will be lots of photos.

Starting from Les Contamines we jumped onto some trails and soon reached Notre Dame de la Gorge. This is the start of the unpaved La Voie Romaine that leads to the Col. It’s a “road” until roughly 2000 metres, but often very, very steep especially early on. 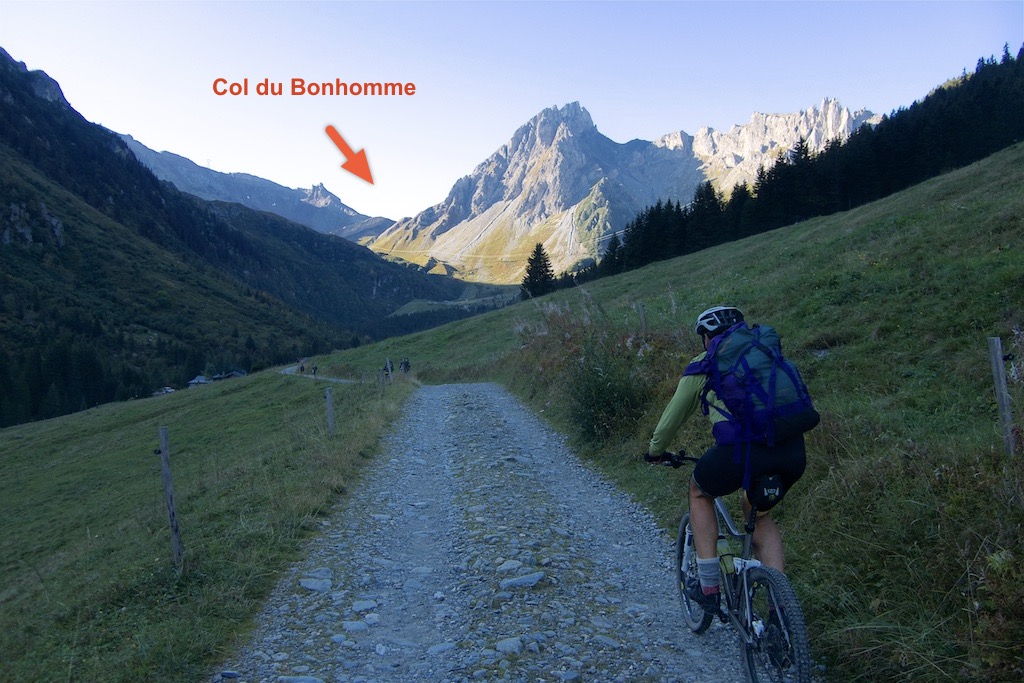 Roman coins have been found at the col, but it’s an exaggeration to think this is an old Roman road. For example, the Pont Romain was built in 1780. 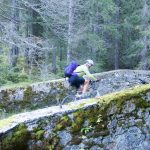 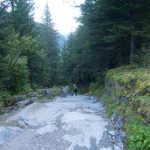 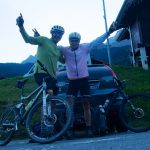 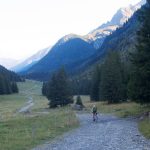 Above 2000 metres, the road becomes a hiking trail. It’s sometimes rideable, but often bike carrying is required. The majority of our 3 day journey would follow the main TMB route (and occasionally official secondary options). The TMB (Tour du Mont Blanc) is a popular official hiking route so it’s always a well-signed and well-used trail.

At the end of the road is another trail that leads to the beautiful Lac(s) Jovet (there are 2 lakes with the same name). I’ve visited there by mountain bike – details here. 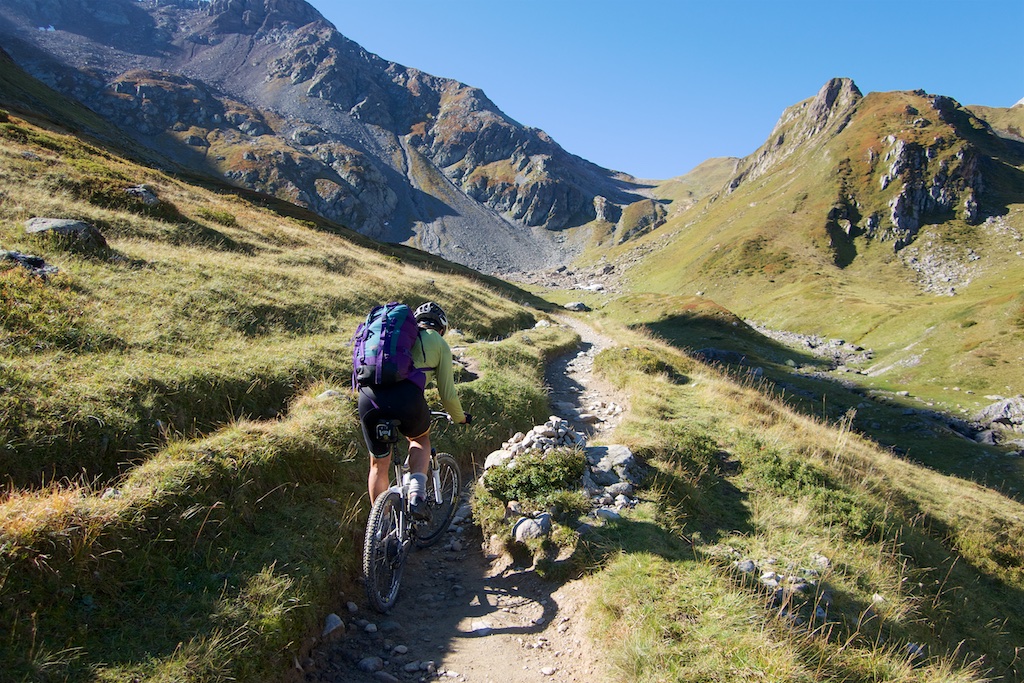 Col du Bonhomme is at 2329 metres and has wonderful views in every direction. 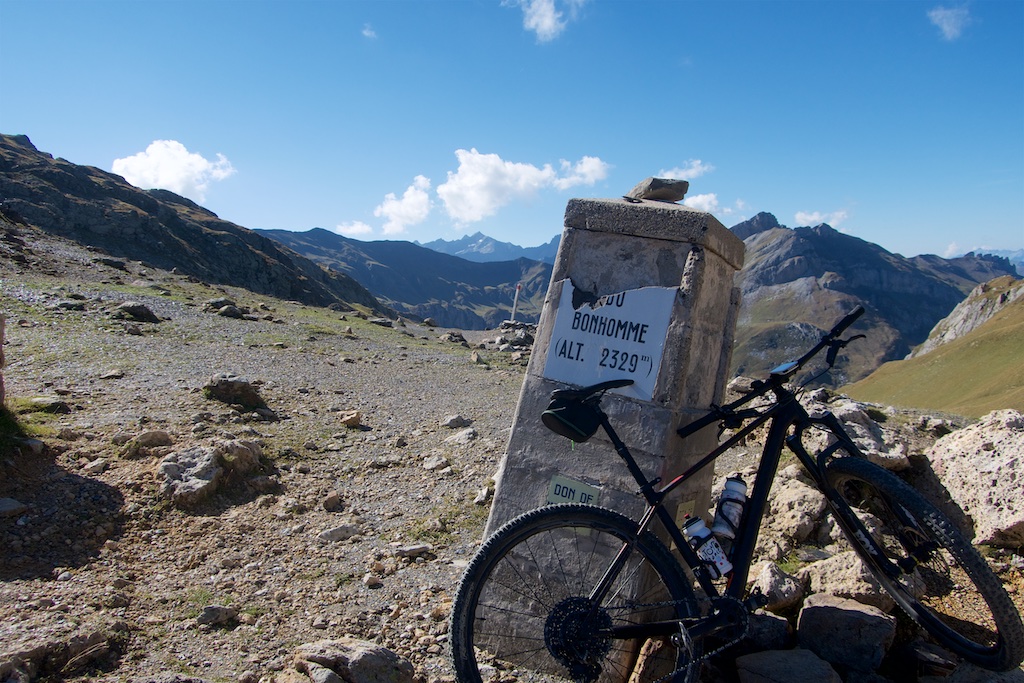 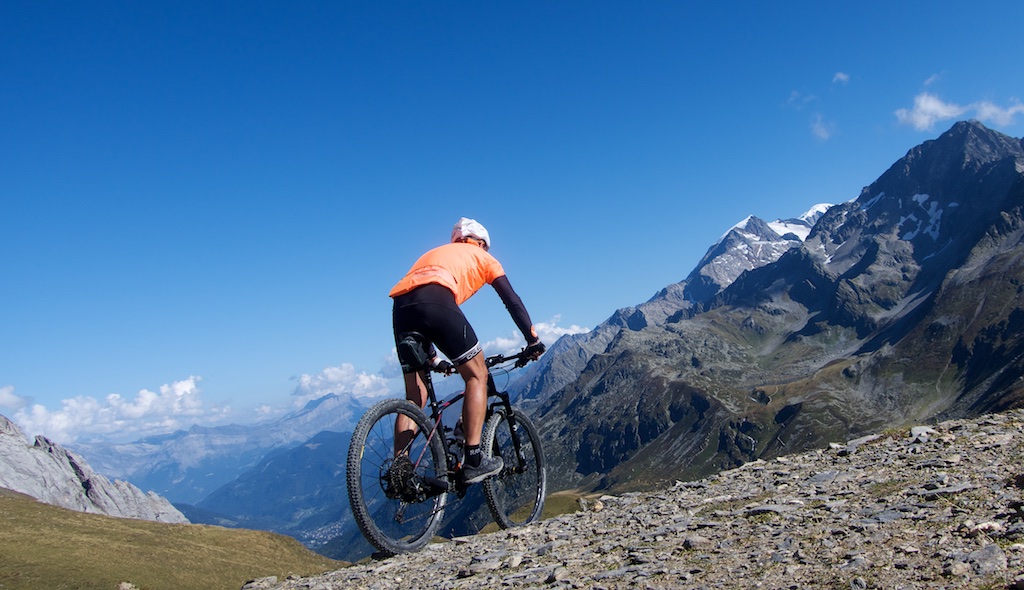 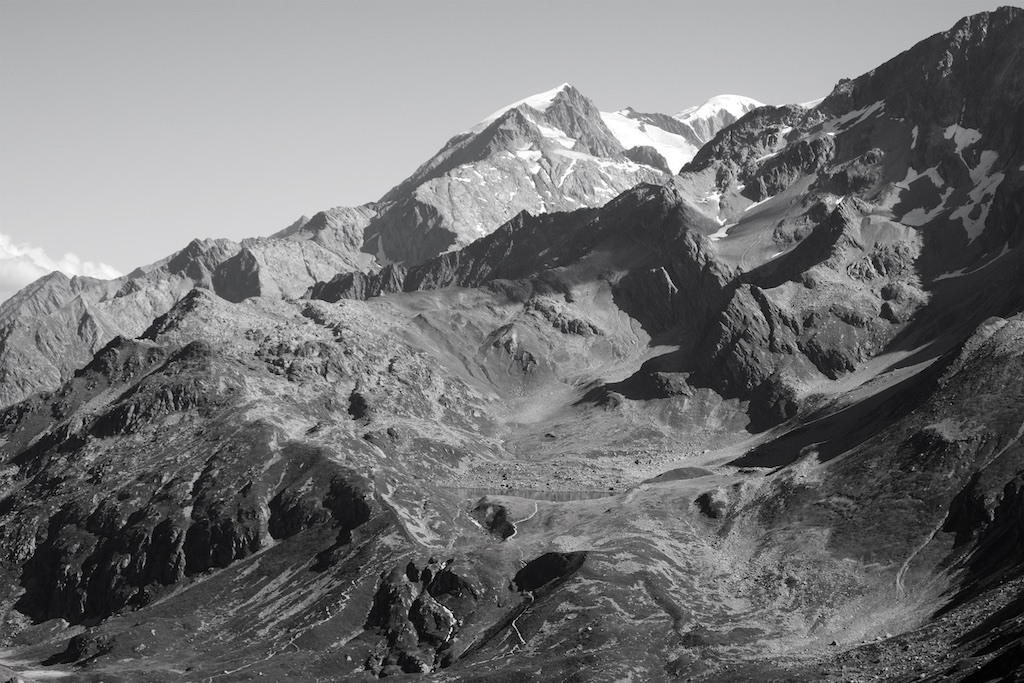 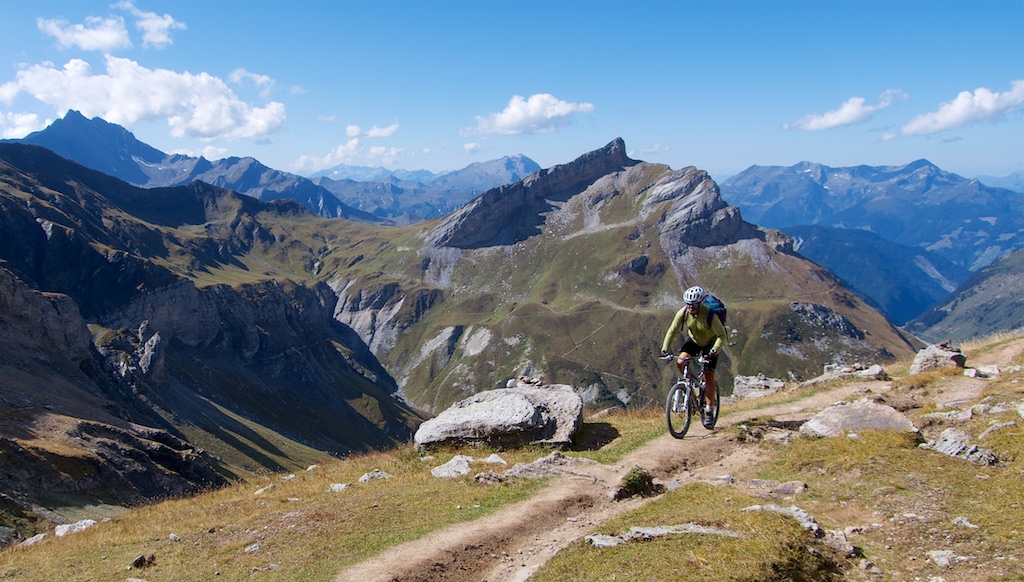 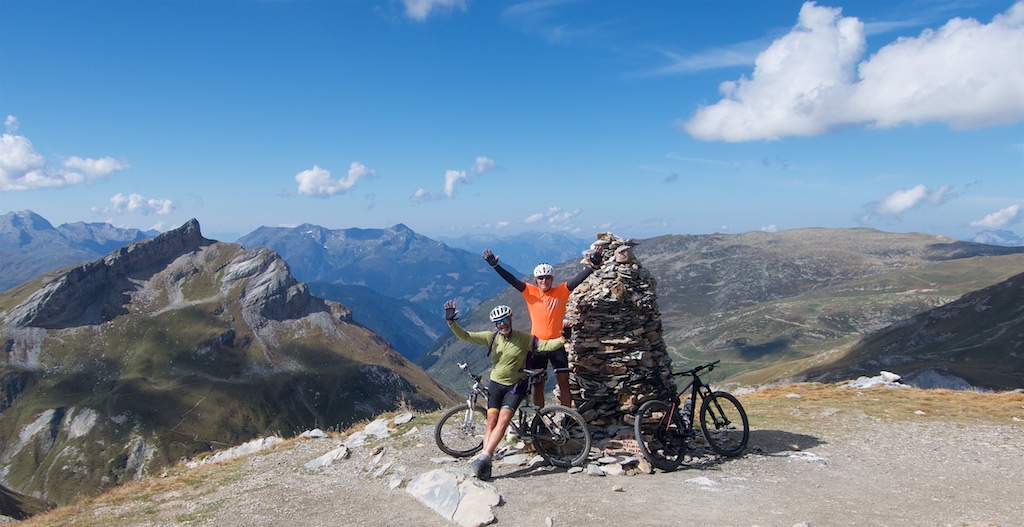 As the profile on the above map shows, the descent to Les Chapieux is often very steep. It’s mainly trails, not dangerous, but you better have adjusted your brakes. 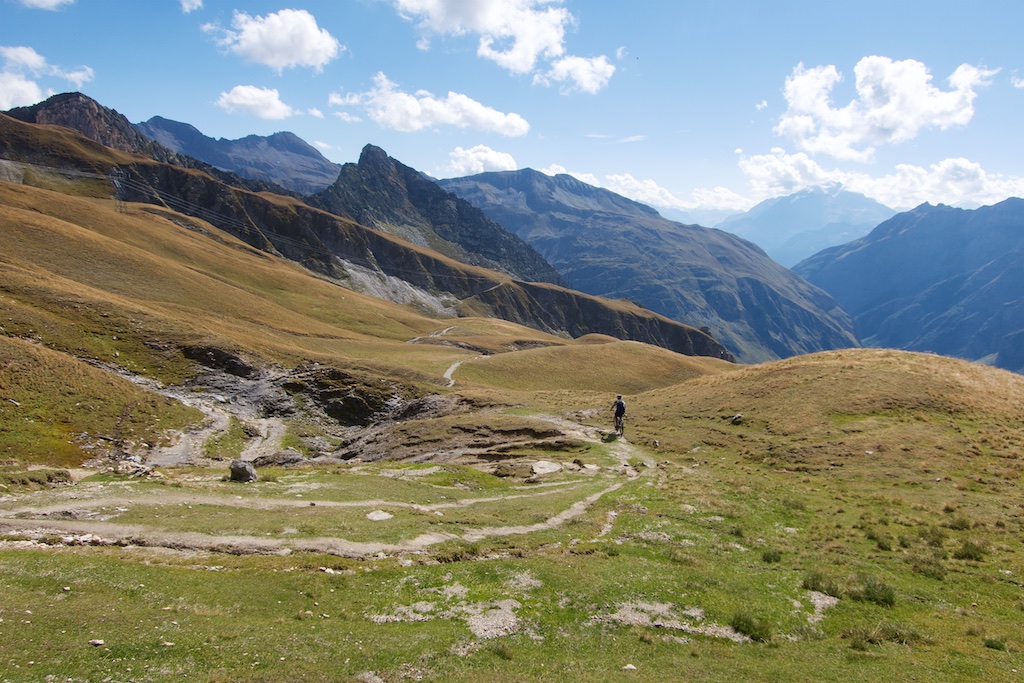 Alfie on an easier stretch of the descent 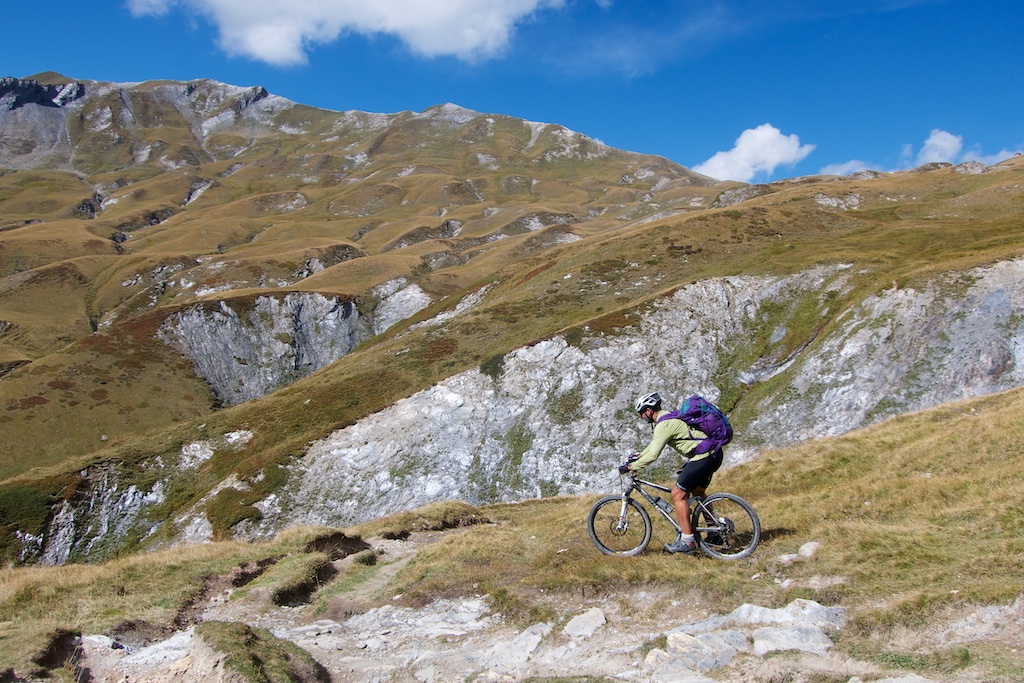 We took the steep little paved road to La Ville des Glaciers, but as the photo below shows, there is a possible trail option on the right side of the torrent/river. It was exciting when the wonderfully named Glacier des Glaciers came into view: 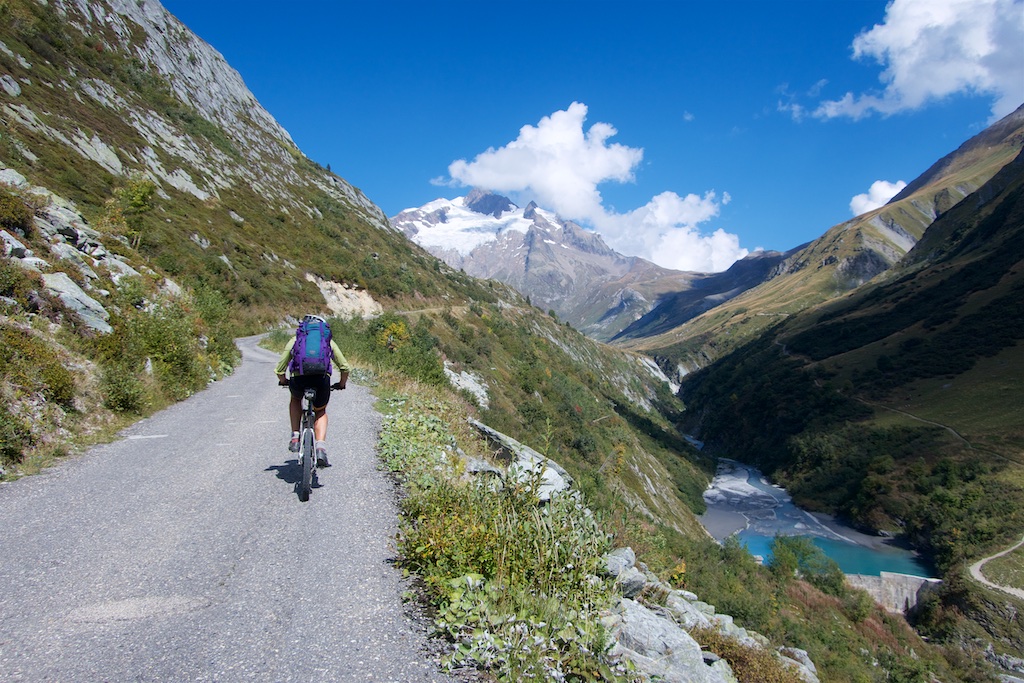 Possible trail option to right of the little dam

At La Villes des Glaciers we turned right onto a gravel road that would soon turn into a hiking trail. Again, it becomes very steep and technical at times. We would cycle easiers stretches and push the rest. But we were both very cheerful. What a place! 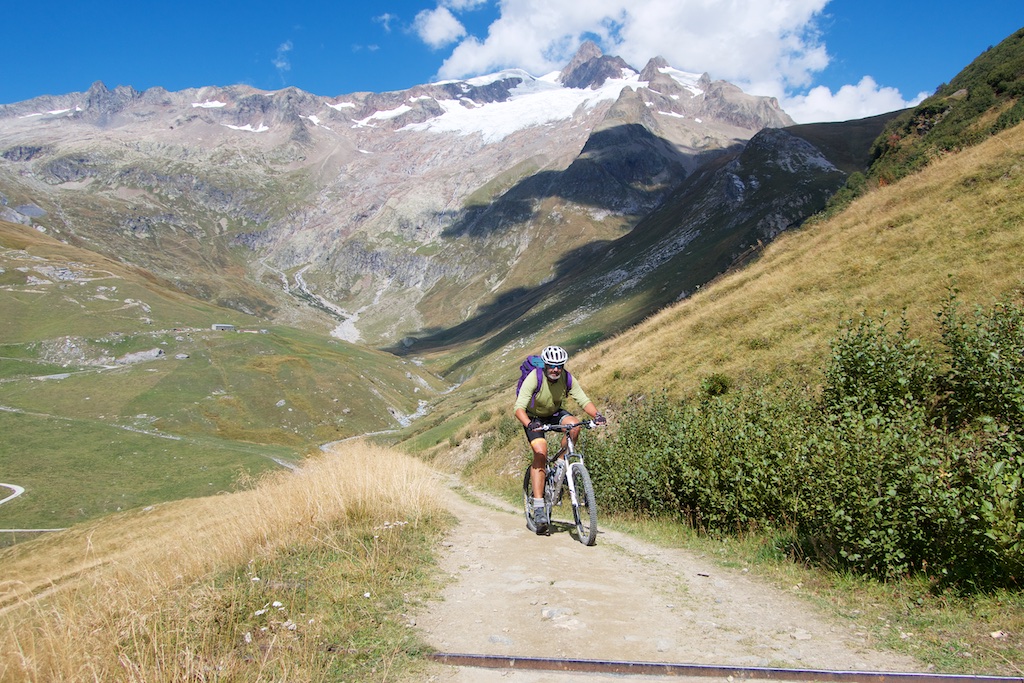 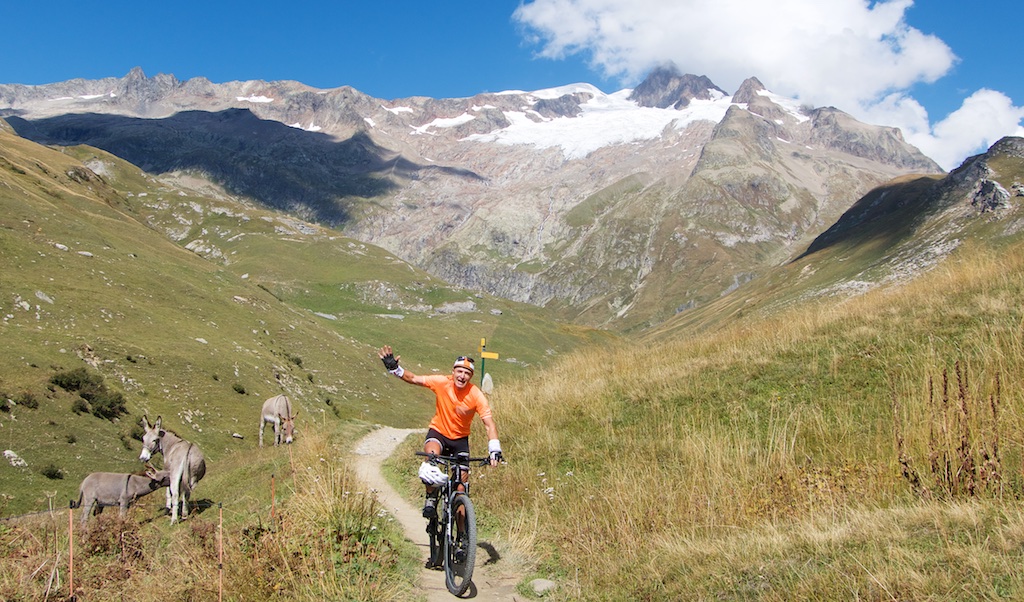 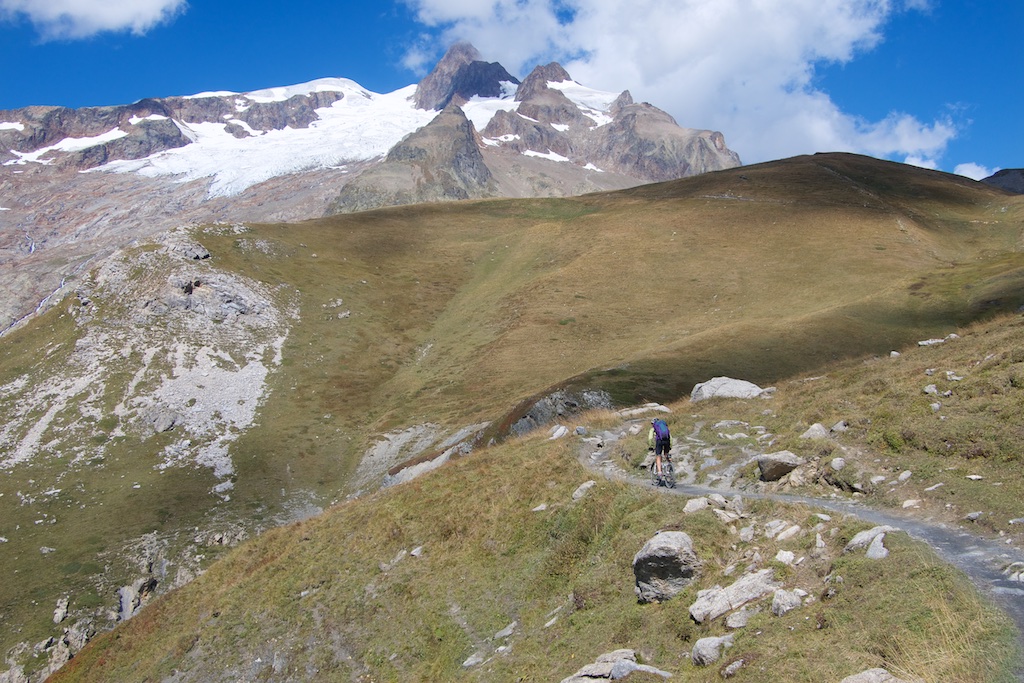 Col de la Seigne (2516 metres) is the French/Italian border. We could see a cloudy covered Mont Blanc in the distance. 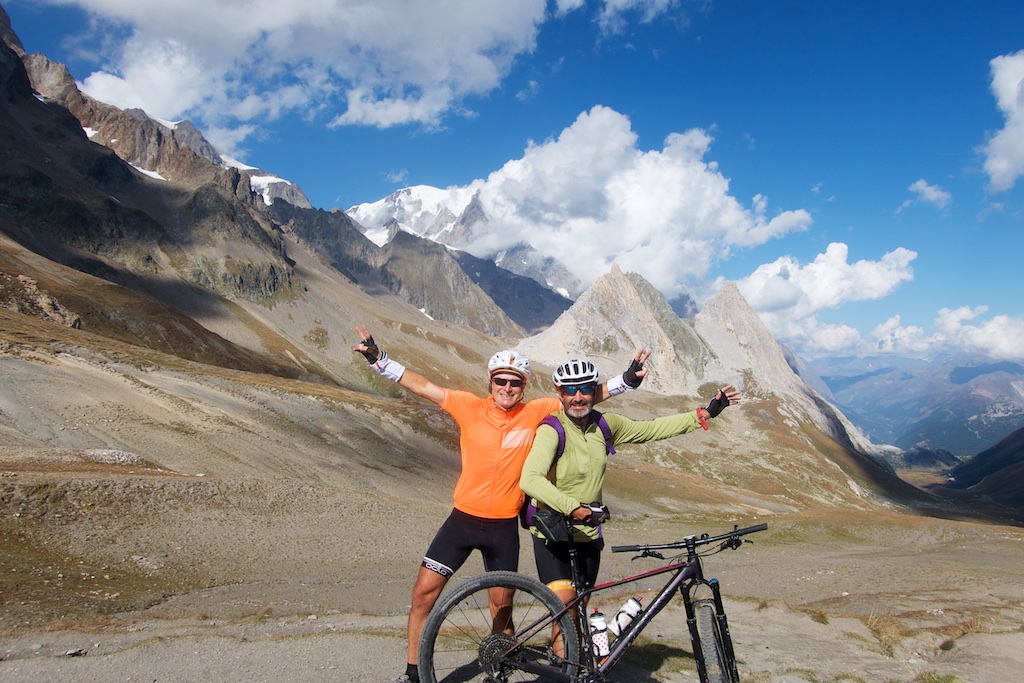 The descent to our Day 1 end-point of Entrèves (just above Courmayeur) through the Val Veny is phenomenal. It’s a touch technical at first then completely rideable. On our left we passed glacier after glacier as we got closer to Mont Blanc. I don’t have the adjectives to do this justice. 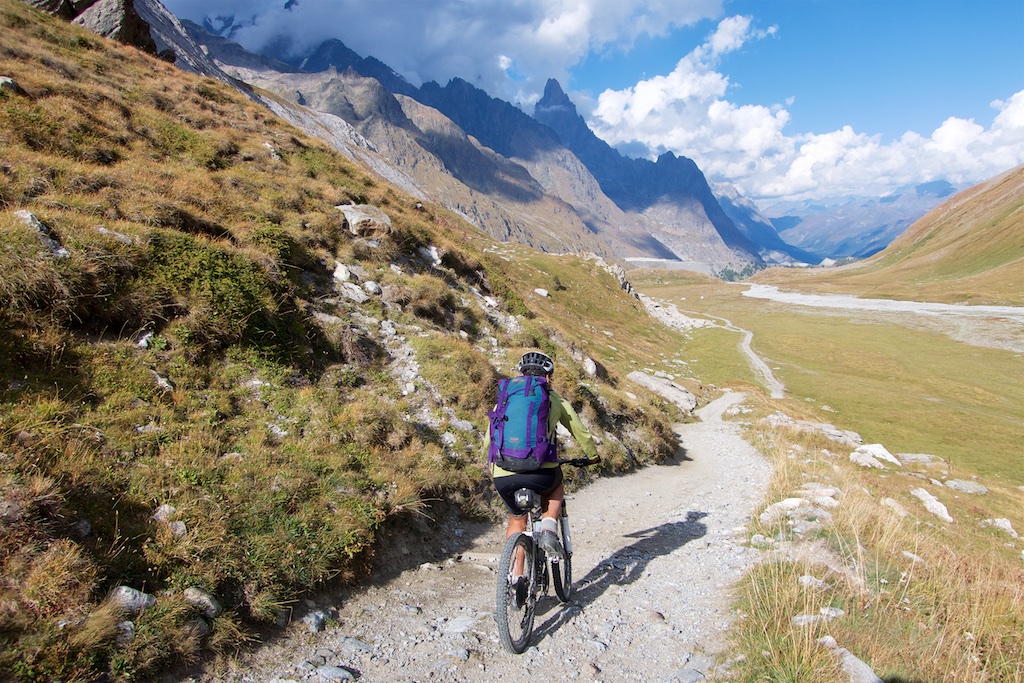 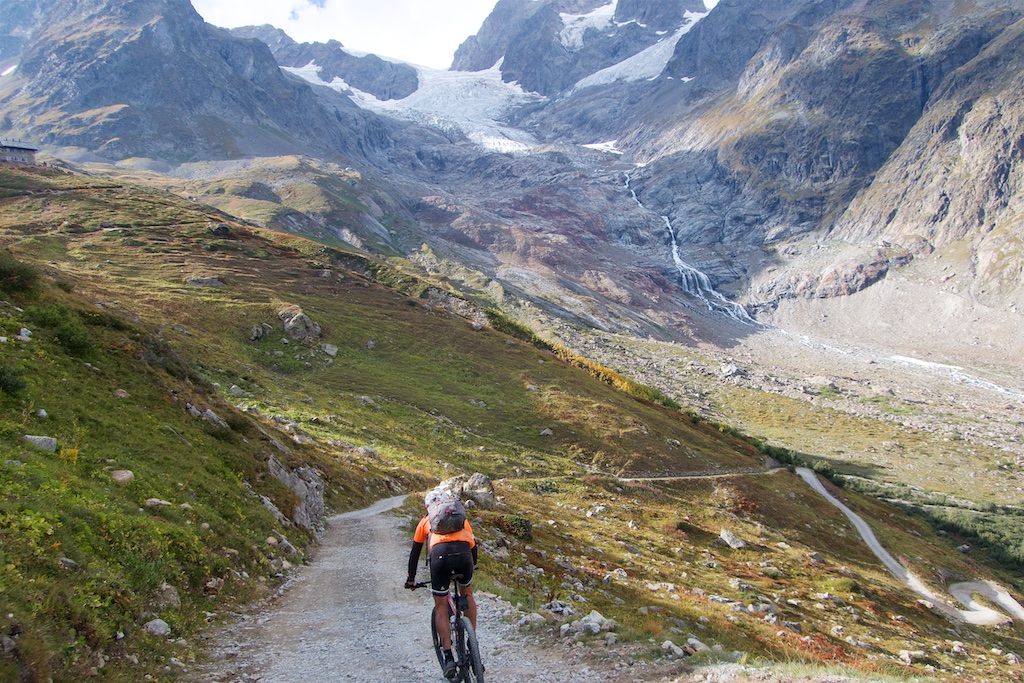 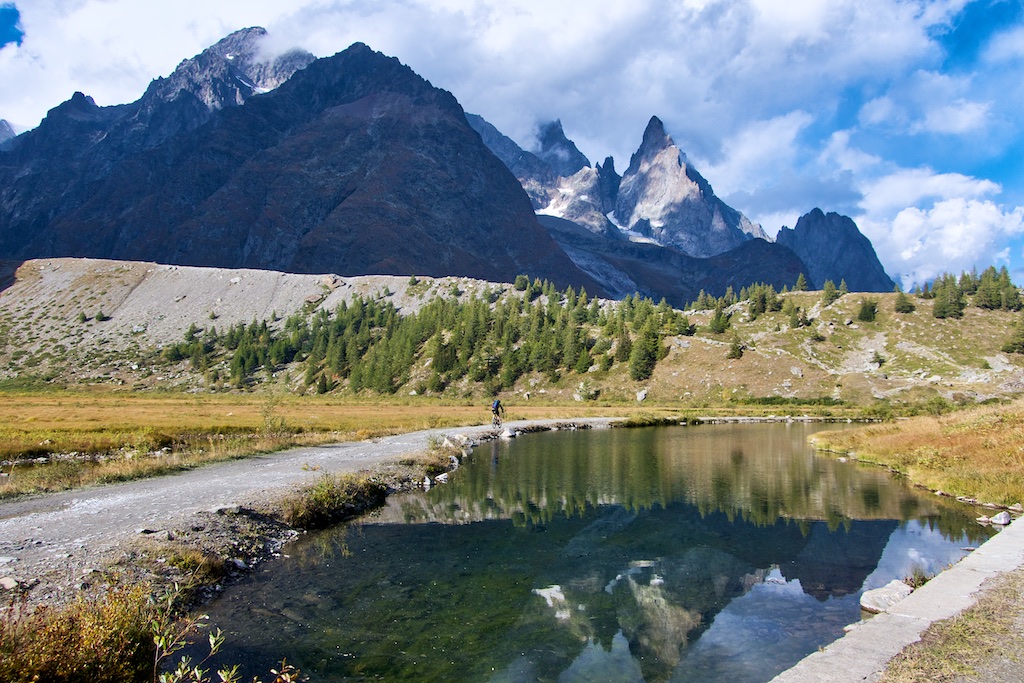 Note, near the bottom of the descent we took a left onto a quiet gravel road that allowed us to avoid descending down low into/below Courmayeur, instead passing the entrance of the Mont Blanc tunnel into the village of Entrèves. 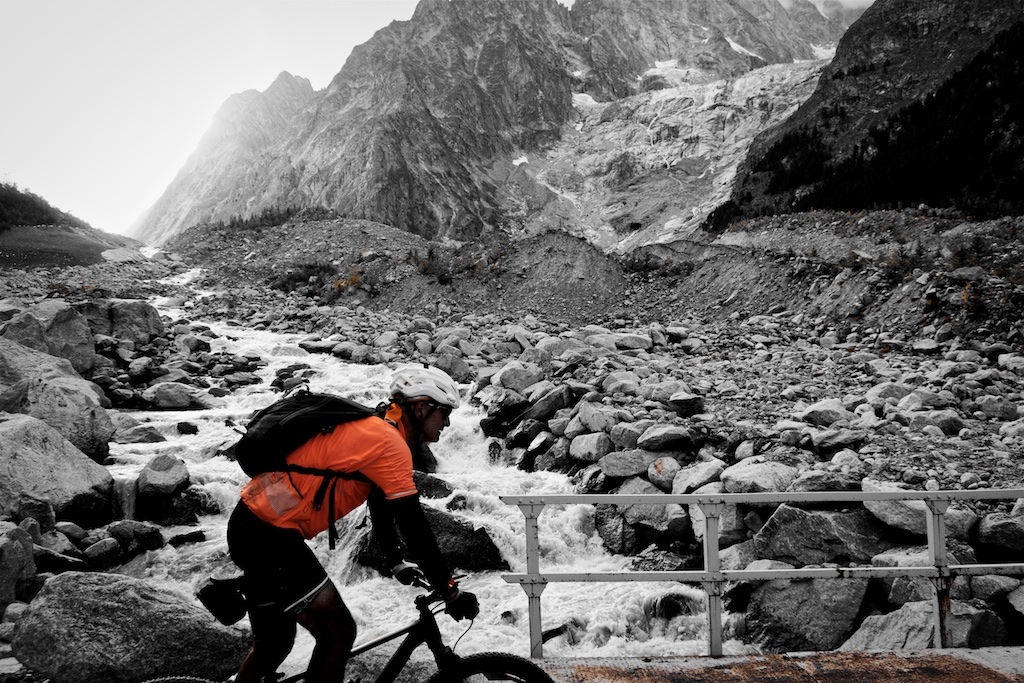 Woohoo, this was a brilliant first day – every turn seemed to reveal a new, beautiful view. But again, this stage was far more difficult than the stats might indicate. We laughed a lot at our average speed which seemed to hover around 5 km/h until our final descent raised it above 6! But carrying a bike up a mountain trail can be slow. We are not fast but we’re both reasonably fit and this 50 kilometre stage took us over eight hours of moving time. 😉