I hate tunnels – and Eric had told me about this particularly nasty one. But the route seemed so enticing that I somehow found the courage to at least have a look. Several signs warn that cyclists must have a light — I had a tiny thing in my pocket ready to wave at oncoming cars – while screaming and hugging the wall. 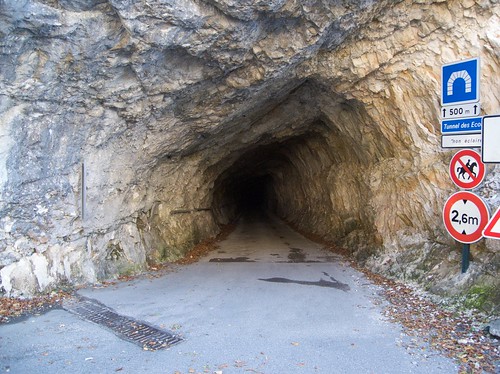 The route starts by cimbing into the Gorges des Ecouges. It was about 7 or 8 kms to the tunnel and I was nervous and enjoyed this lovely climb less than I should have. It leads into huge cliffs and waterfalls (2nd photo above) and I started to understand why a tunnel might be required.

A few minutes before the tunnel a motorcyle passed me and offered to lead me through – an answer to my prayers! I picked up the pace and going uphill through this dark monstrosity – with my moto support behind – I hit my max heart rate for the year. 😉

Important tip (for next time): If you are planning a loop that passes through a long dark tunnel, try and do it downhill – it ends faster.

After the tunnel, my spirits were sky high – and I flew up the straight stretch to Col de Romeyère.

The next part of the route was designed to Climb Col du Mont Noir via Col de Pra l’Etang (also spelled Prélétang).

Most of this is single lane (occasionally bumpy) forestry roads. I passed some sort of French army manoeuvre. I think I saw the HQ of one side, and then saw quite a few advancing guys hiding behind trees. Luckily they all ignored me.

Mont Noir is so named due to all the fires that locals used to light trying to chase/kill wolves – apparently a couple of the fires got out of hand.

From the Col du Mont Noir is an amazing descent that passes through the Gorges du Nan. Wow, I stopped to take a couple of photos and was noticeably shaky on my feet looking off the cliff road. The descent also goes by the Pas (pass) de Pré Coquet and a large French resistance memorial (ubiquitous in the Vercors) – photos above. 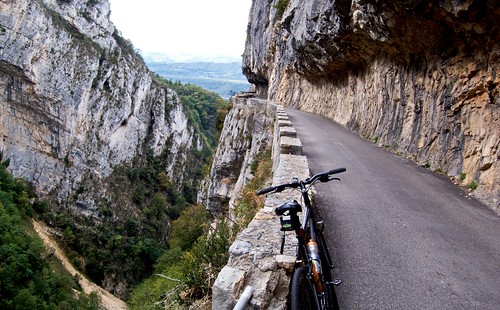 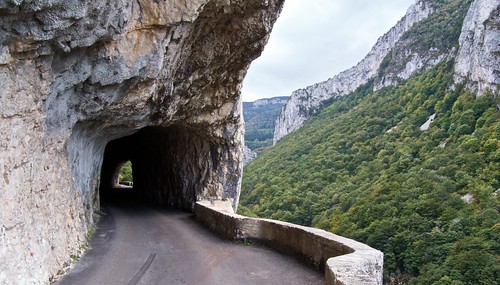 This great route is definitely worth doing in the opposite direction – climbing through the Gorges du Nan and – importantly – descending through the nasty tunnel (but remember to bring some moto support).