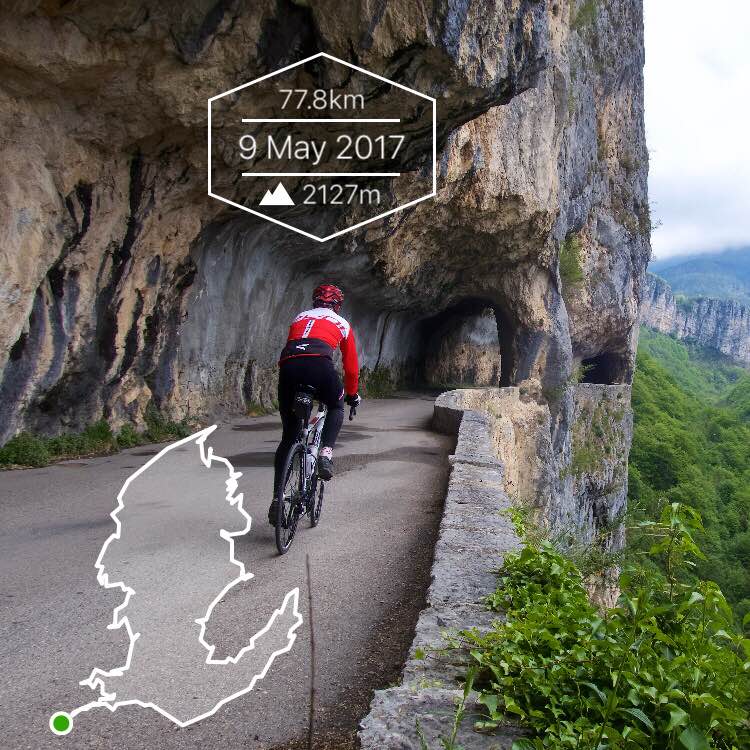 The Vercors massif just west of Grenoble is one of the most interesting places I know to cycle. It’s relatively modest altitude, by alpine standards, means many cyclotourists mistakenly give it a pass. But there is plenty of impressive climbing here (both profiles at left have more than 1000 metres of ascent). And some of the cliff/gorges roads cut into the cliff are just astonishing.

A 3D video of today’s ride.

I started in the scenic old village of Pont-en-Royans cut into the rocks on the edge of the Vercors. This can also be the start point for another great “cliff” ride to Combe Laval – see here.

The route initially enters Les Gorges de la Bourne, but I quickly turned up onto a tiny road leading to Presles. Unfortunately, it was overcast, but this road is immediately fun climbing towards Dolomite-like massifs. 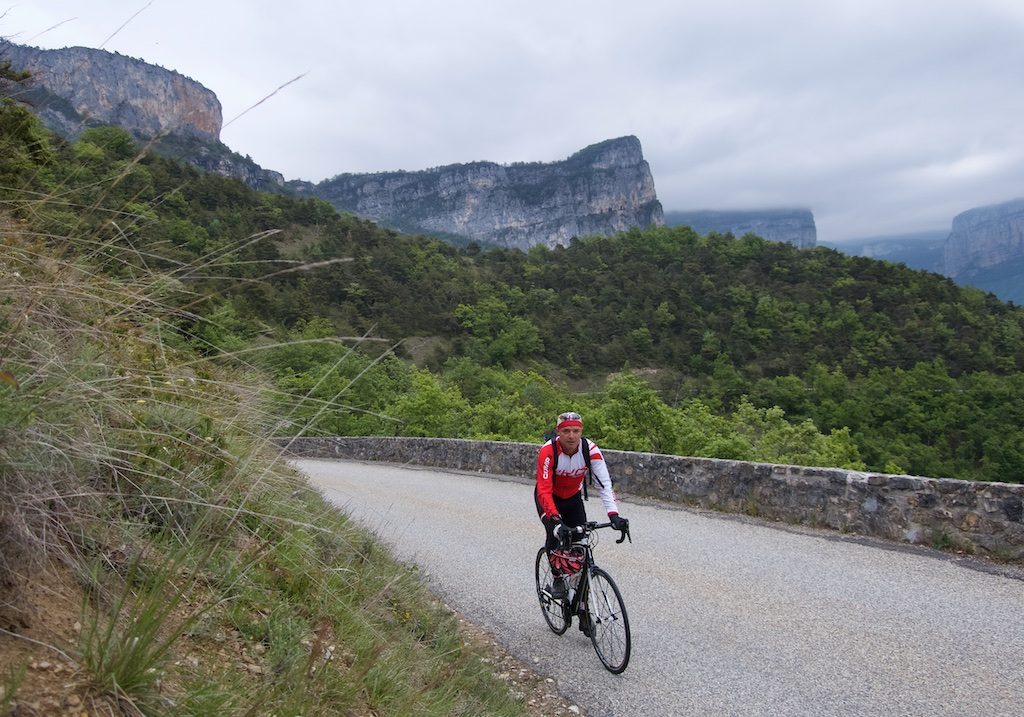 After several kilometres of climbing, I reached Col de Toutes Aures (560m). A touch further and things get fun as the road hairpins up into a cliff and the road just cuts through it. 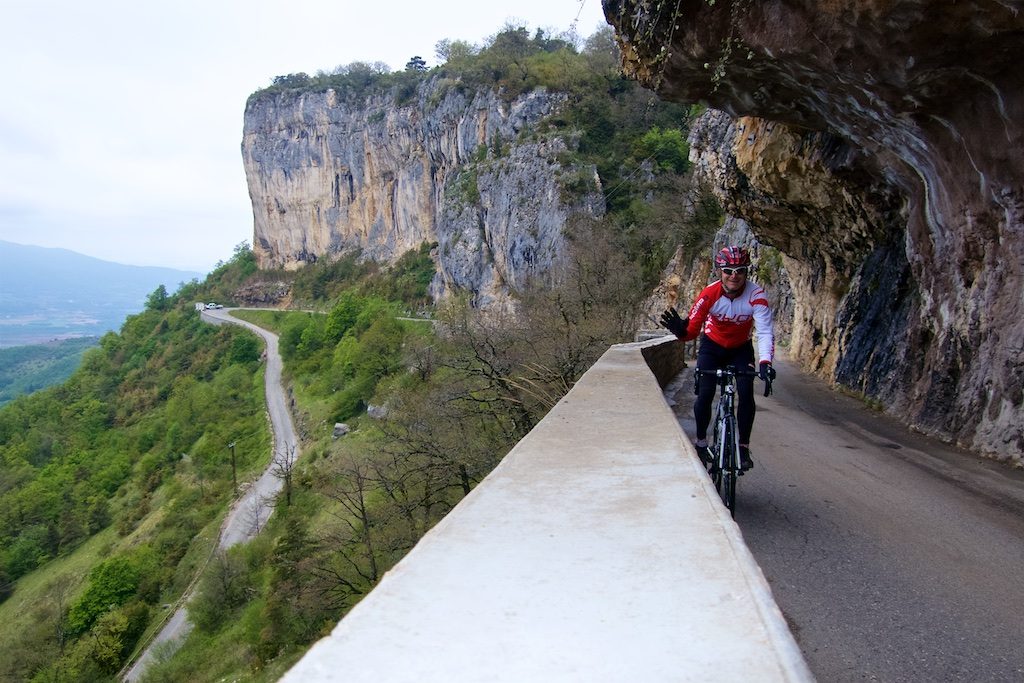 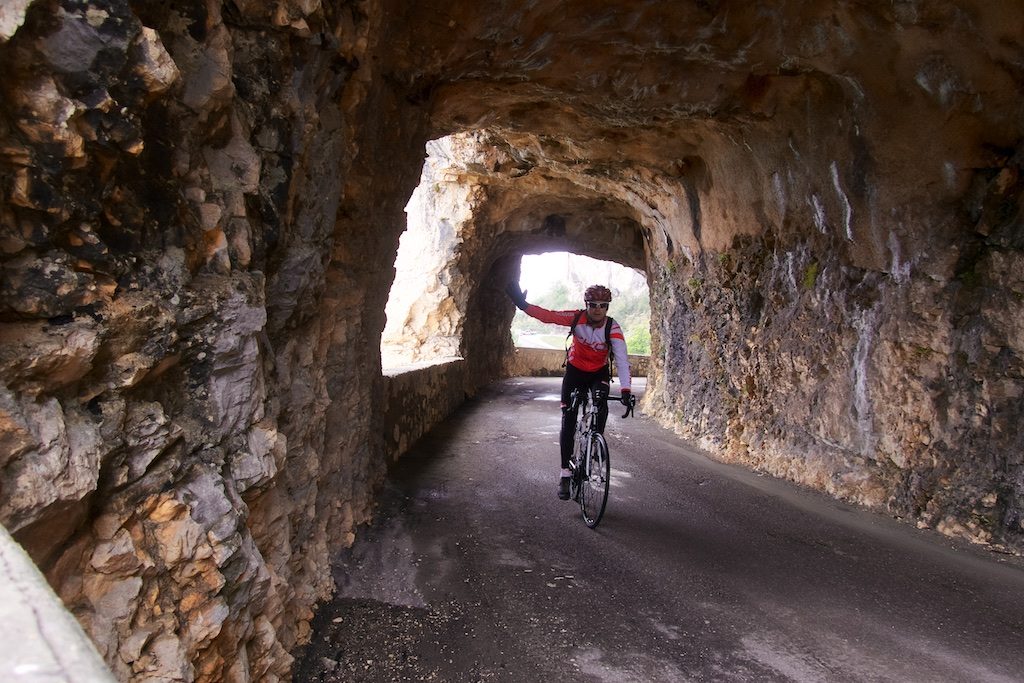 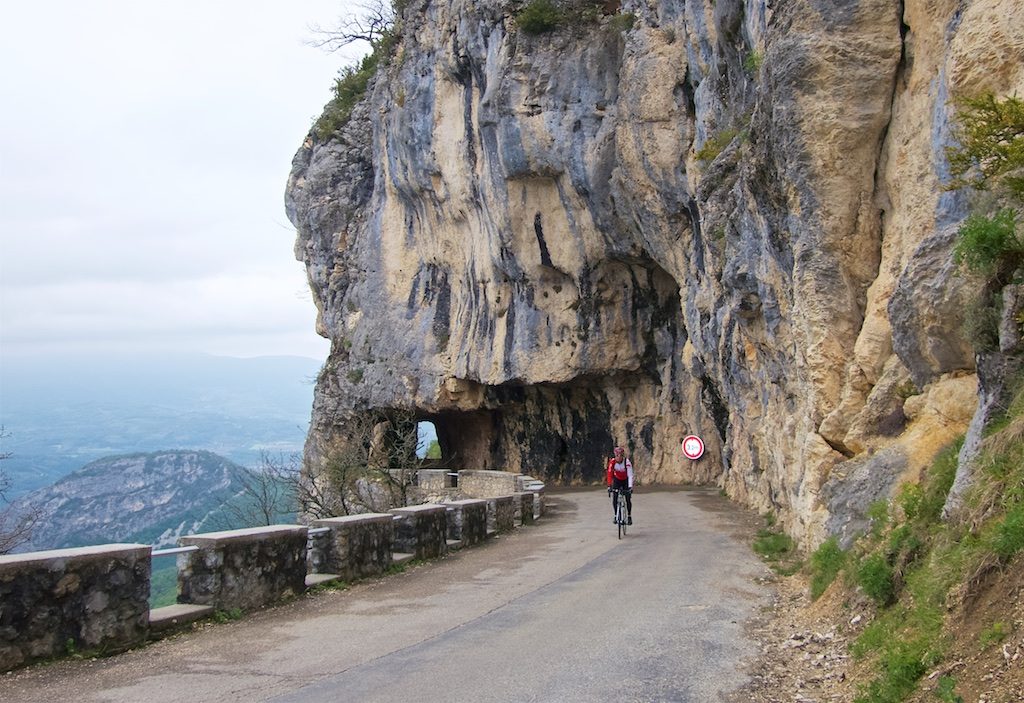 Just before Presles, it’s possible to take a tiny forest road all the way to Col Prélétang (1267m), and that’s the profile I have shown above. But I would instead turn left, cross Col de la Croix Bernard (944m), and descend out of the massif (see map at bottom). This was so I could climb back into the massif through the fantastic Gorges du Nan, eventually reaching Col de Prélétang from the far side.

From Croix Bernard, it’s initially a bumpy descent but eventually joins a quiet, better road. I would need to ride four kilometres on a fast road in the valley floor, but even this was almost deserted. At Cognins-les-Gorges, I would head up again. Starting below 300 metres, this is ultimately one of the biggest climbs in the Vercors topping out at 1421 metres at Col du Mont Noir.

What a special road! The lower slopes cut into the massif and then into the cliffs above Les Gorges du Nan. 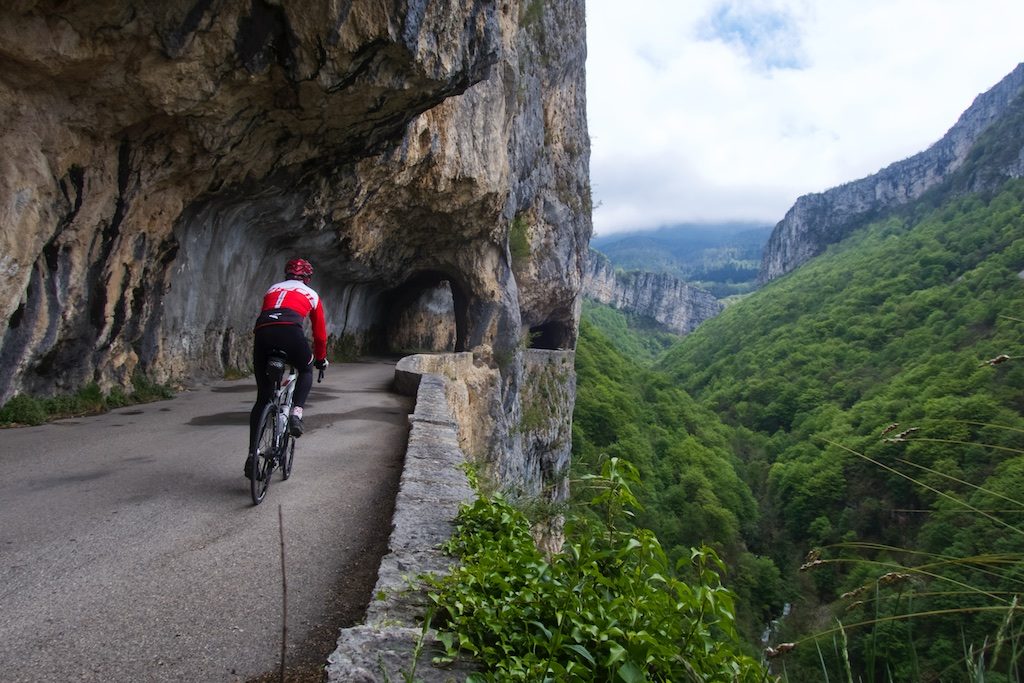 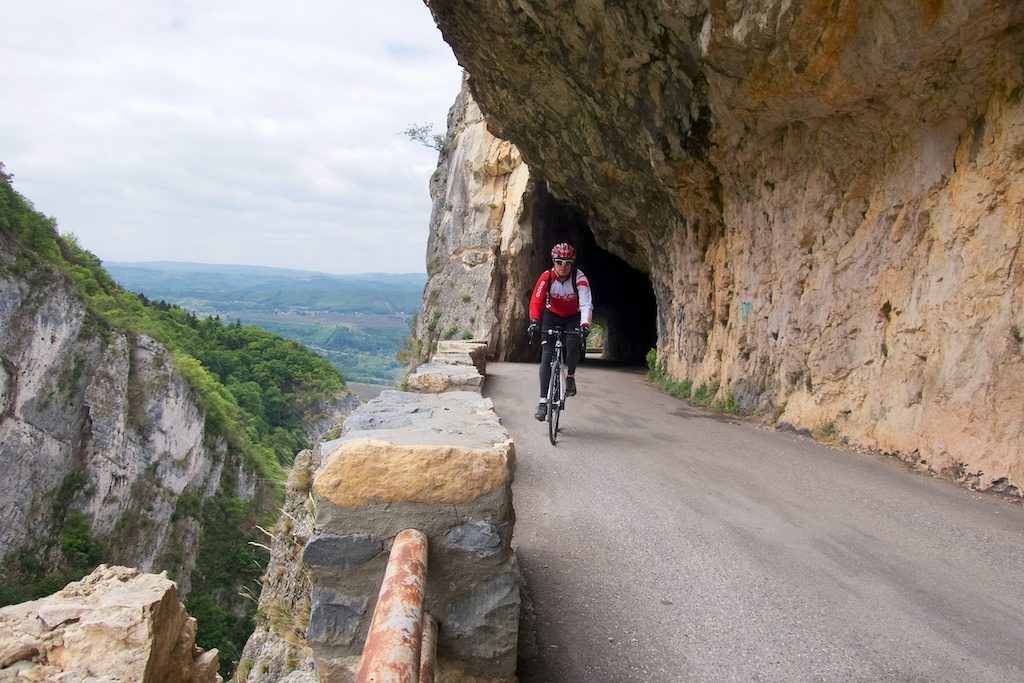 And then the road just goes higher and higher. At the small village of Malleval-en-Vercors is a moving WW2 monument. In January 1944, the town was surrounded by the Nazis and many locals and members of the Maquis (French resistance) were killed. 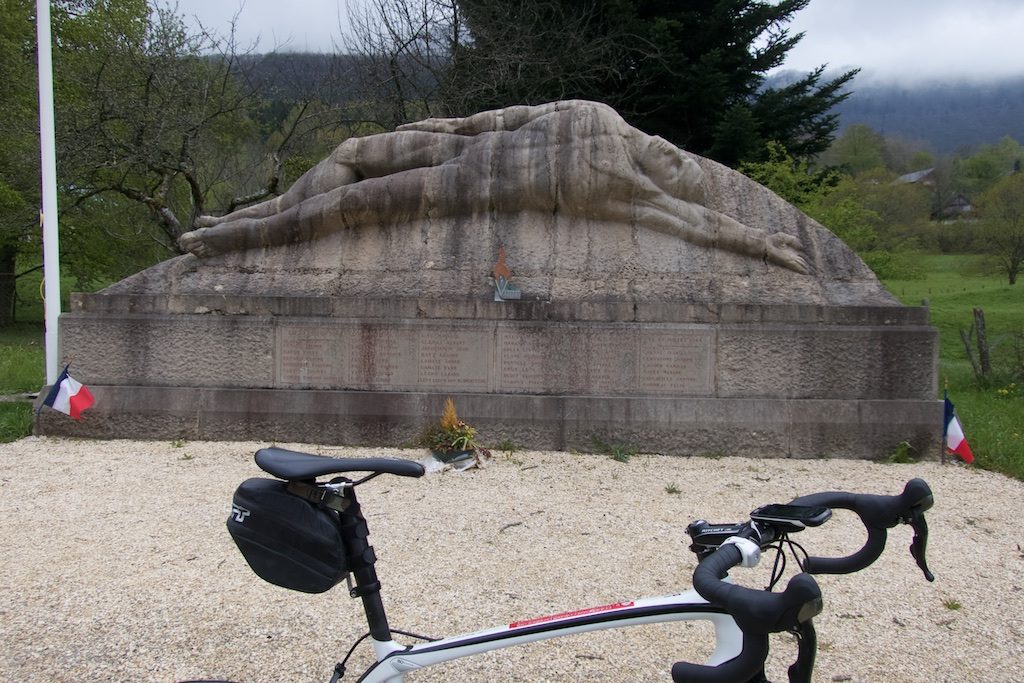 Well above the village is another Col: Pas de Pré Coquet (1267m) before the route finally reaches Col du Mont Noir. There are plenty of options around here. I once reached Col du Mont Noir from the far side via Col de Romeyre, and the scariest tunnel ever – see here. And there are definitely some high, fun-looking, mountain bike options too.

Mont Noir was named after a fire designed to cull a local wolf population that got out of hand.

But I would take another tiny forest road to Col de Prélétang.

Suddenly, in the middle of nowhere, 8 guys in camouflage, face paint, and holding machine guns come out of woods and stop me. Surround me. Wave map at me. “Where are we?” Fortunately, they were friendly. It was a French army exercise. We spent 10 minutes changing the coordinate system on my bike GPS (no photo allowed) 🙂 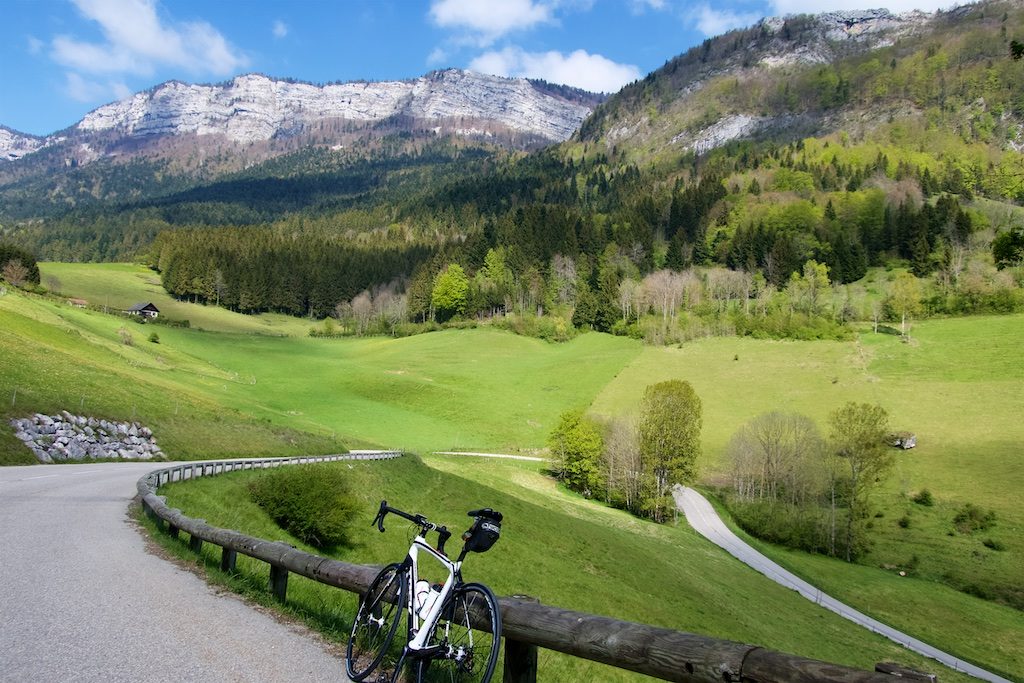 The road through Gorges de la Bourne is not deserted like most of this loop, but it’s yet another fascinating stretch of road. It was all downhill back to the start – very fun. 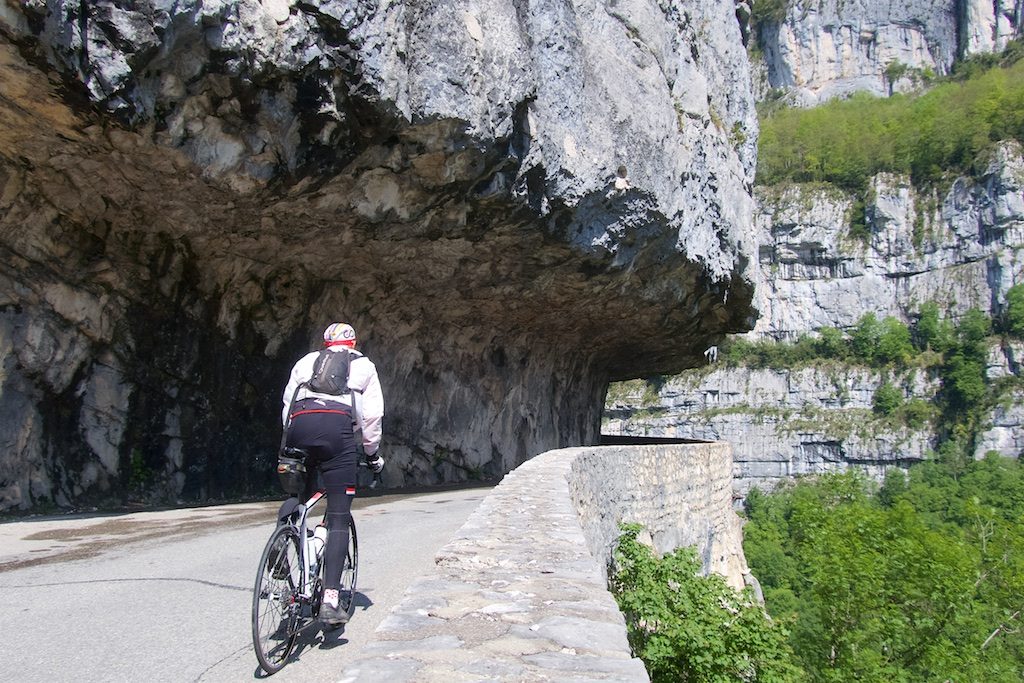 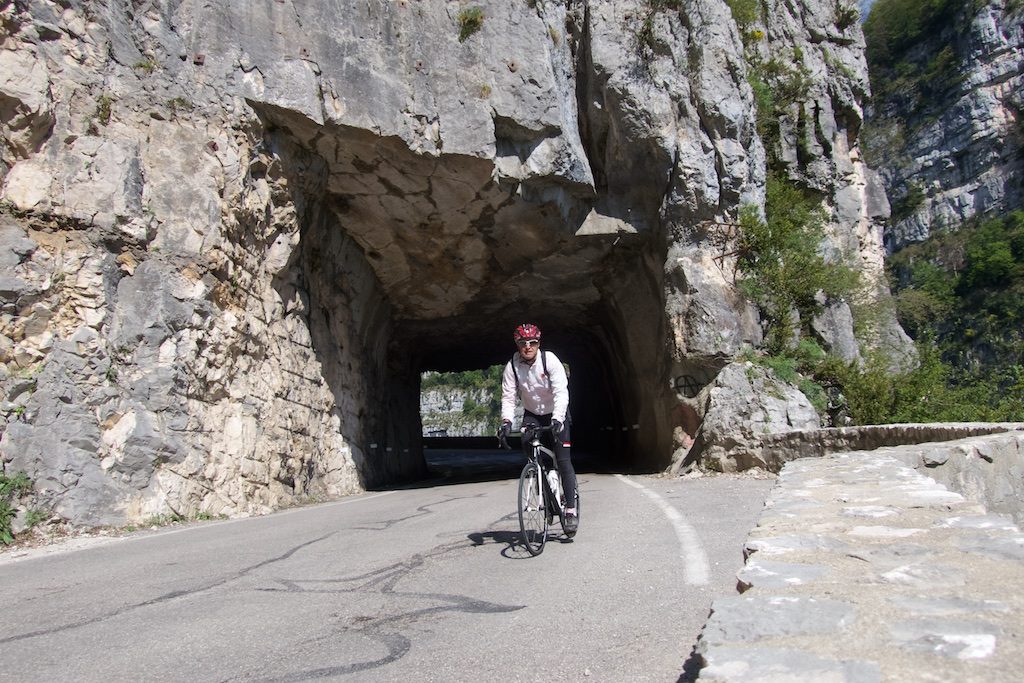 I am working on a post that highlights a bunch of rides through the fabulous Vercors that should be done in the next few days. If visiting the Alps, consider this often neglected region.

Note, on the map below, my GPS was briefly confused while heading through the Gorges du Nan tunnels. But it’s impossible to get lost once you begin.