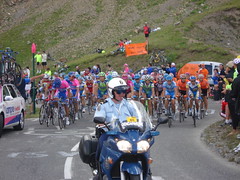 Stage 17 of the 2008 Tour de France will be epic. And as the last big mountain day, this stage could decide the entire race.

The riders will be tired after the gigantic stage the day before including the highest road in France – see here for a preview of Stage 16. And after another tough day, finishing up the legendary Alpe d’Huez promises a truly memorable stage.

Below is an overview of the three big climbs.

This will be the 31st time that Col du Galibier has been in the Tour – more than any other climb in the Alps – first appearing in 1947. The list of riders to be first over Galibier include such legends as Coppi, Gaul, Merckx, and Pantani.

Rated Hors Categorie (hardest rating) the route will climb Galibier from the less interesting Briancon side. The first 28 kilometres is a long, easyish, straight drag passing through the Sierre Chevalier ski area.

At the Col du Lautaret, the route makes a right-turn and gets much more interesting. The last 8.5 kilometres are beautiful. Don’t forget to look out for the monument to Henri Desgranges (see photo), the founder of The tour – nearing the top.

This will be the 15th time that Col de la Croix de Fer has been in the Tour – first appearing in 1947.

This is another giant Hors categorie climb. The grade is constantly varying – there are even a couple of small descents. This climb might be the perfect place for an attack. Once at the top, it will be a thrilling 32 kilometre (20 miles) descent as riders catch their breath before the Alpe.

Alpe d’Huez first appeared in 1952 – this will be the 26th visit – and was the first Tour de France stage to ever finish at altitude. Only Lance Armstrong and Fausto Coppi have won an Alpe d’Huez stage and gone onto win the Tour the same year.

Sometimes called the highest place in the Netherlands – because so many Dutch riders have won here – each of the 21 hairpins are signed and named after a stage winner. It’s a lot shorter than the day’s other two climbs but from the beginning and throughout it is steep. Let’s hope it’s still close when the riders arrive.

If you are planning on watching this stage on Alpe d’Huez, you want to start early as they might close the hill if it gets too crowded. As an alternative plan to get to the finish line – see “Alpe d’Huez – Five Different Rides” for a map explaining a couple of alternate ways to climb up – via the Col de la Sarenne is a beautiful option.

For this stage, i’ll be riding from Briancon and will probably watch atop Galibier. I’ll be the bald guy in the polka dot jersey, climbing at a measured pace.