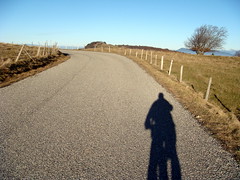 I live just a little bit up le Saleve, a giant pre-alp massif overlooking Geneva. There are several great ways to cycle up to the top (1,350 metres; about 4,500 feet). Today I explored a route that is in large part on little mountain bike paths.

How imposing is Le Saleve? It was mentioned several times in Chapter 7 of Mary Shelley’s Frankenstein:

Like an idiot I cycled down the super steep north route – which rarely sees the sun this time of year. The road was well salted but still a little icy and treacherous. Some pretty good photos today.