Another steep, beautiful climb on deserted roads in the Jura mountains.

Starting near Bellegarde, the ride got off to a slow start as the bridge to Montanges was closed. This left me on the wrong side of a gigantic (stunning) gorge. I considered changing plans but I’d been wanting to climb this for a long time!

Following a nice cliff road, it took me about 10 kms until the gorge ended and I found a way around.

The hard work starts in Champfromier. There is a tiny, forestry road that heads up the cliffs. It’s not often that I get to use the extra dark red in my elevation charts for kms averaging over 12%. Wow!

My plan was to continue on small unpaved forestry roads to the Col du Merle. Thanks to Bastien for this idea. For his excellent photos – see his article (in French) on this route here.

It is “possible” to use a road bike up to the Belvedere des Avalanches. But beyond this, the route requires a mountain or touring bike.

Luckily, I had programmed the route into my GPS, as the route criss-crossed several other forestry roads. After climbing through the woods for a while through some fog/clouds, I broke through into sunshine again.

Some History:
Nearing my goal, in the middle of no-where, it was time for some history.

First, I stopped to look at La Borne au Lion (under my bike in photo at left). This is the largest of a series of stone markers implanted in 1613 to indicate the border between Franche Comté – then owned by Spain (until 1678) – and Le Bugy and Pays de Gex owned then by the Kingdom of France.

At the same location was a monument to the Maquis (French Resistance). This site was used as a headquarters and hospital by the Maquis de l’Ain and the Haut-Jura during the fighting with the Nazis in 1944.

Less than a kilometre further up the road, I reached my goal: the Col du Merle. 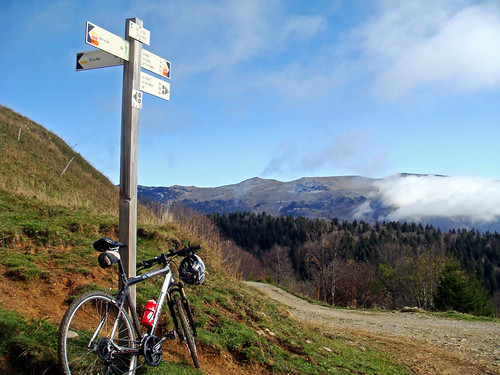