Trending
You are at:Home»Juras»Chalet du Gralet and Col du Sac

Just west of Geneva are the highest peaks in the Jura mountains. On the shoulder of these peaks are a couple of cols reachable by bike on wonderful gravel forestry roads.

See here for the highest paved climbs in the Jura mountains.

Starting from Thoiry, the route takes a trail and quiet roads to the lookout point at Tiocan (860 metres). There is parking and a restaurant at this hiking trail-head. I’d turn left here and never see another car. It’s a long enjoyable traverse west in the mountain forest. Often not too steep, but usually heading higher. 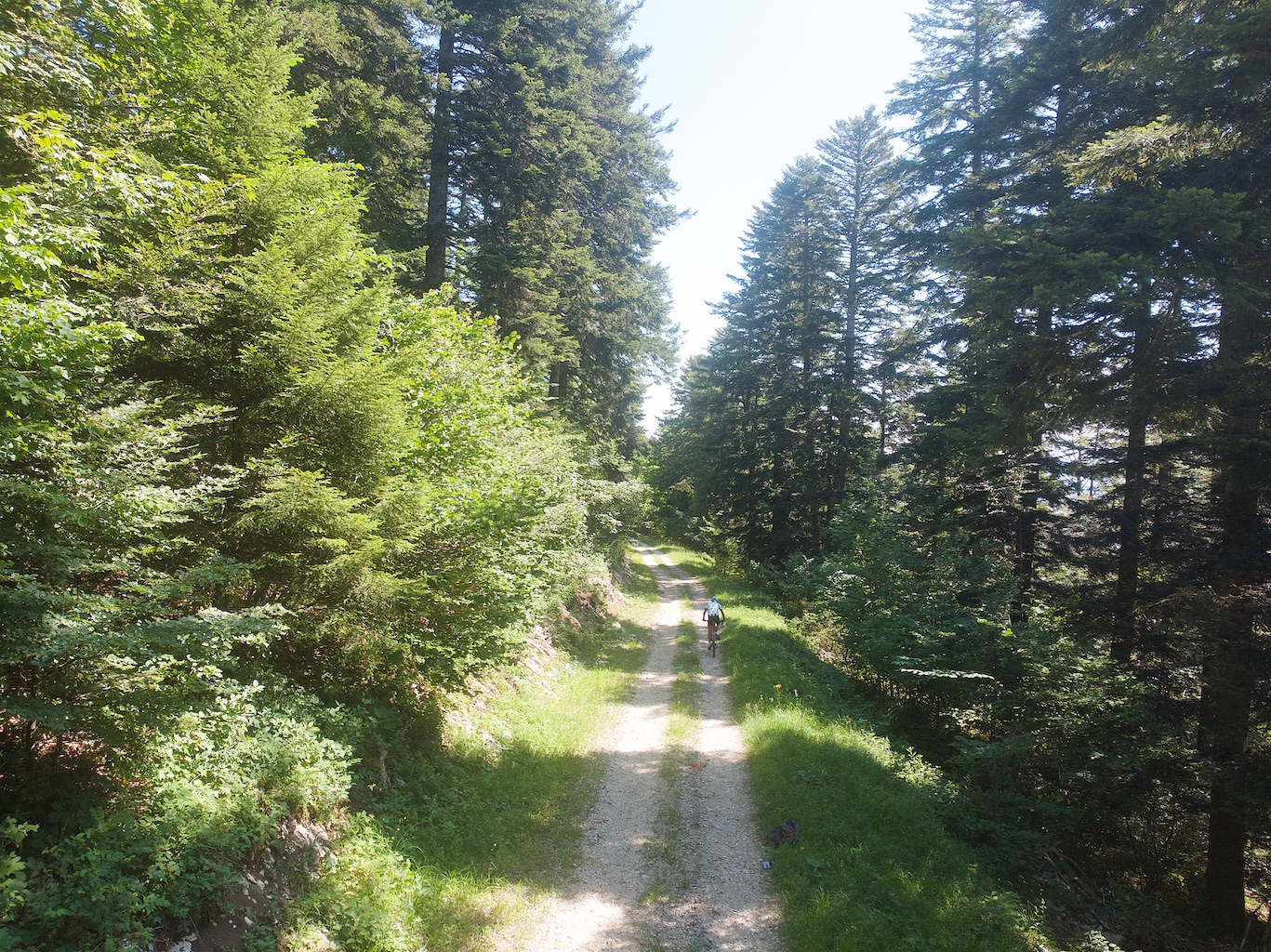 After 18 kilometres – see map/profile below – I turned off the principle road onto a much rougher, much steeper track leading to Chalet du Gralet. It’s rideable but often +20%. Eventually it reaches the top crest of the mountains as it nears the Chalet at 1460m. Just beyond is an official col: Passage du Gralet (1410m) 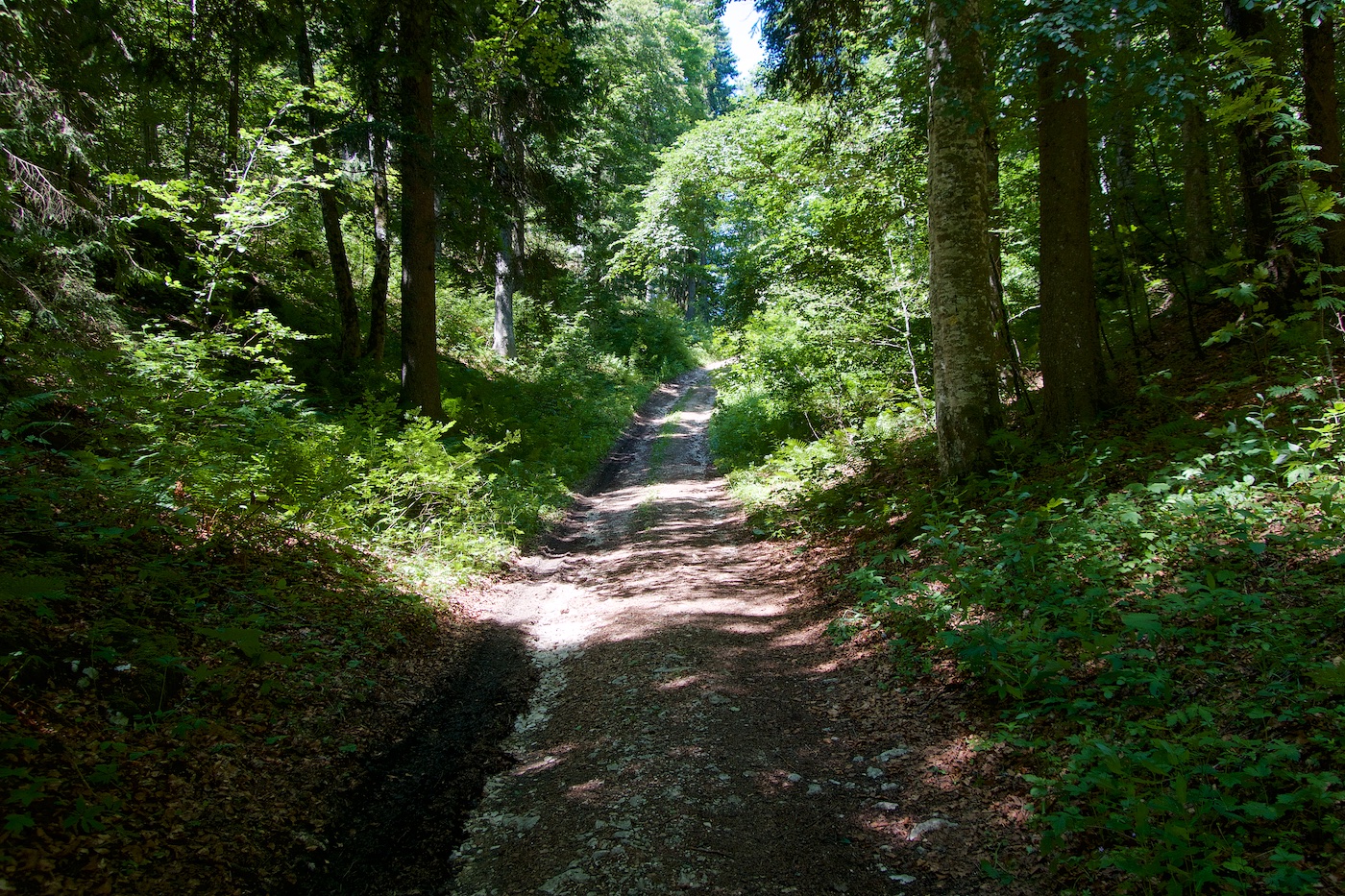 Steep and rough, but quiet and fun

Nice views from the summit of the mountain valley below: 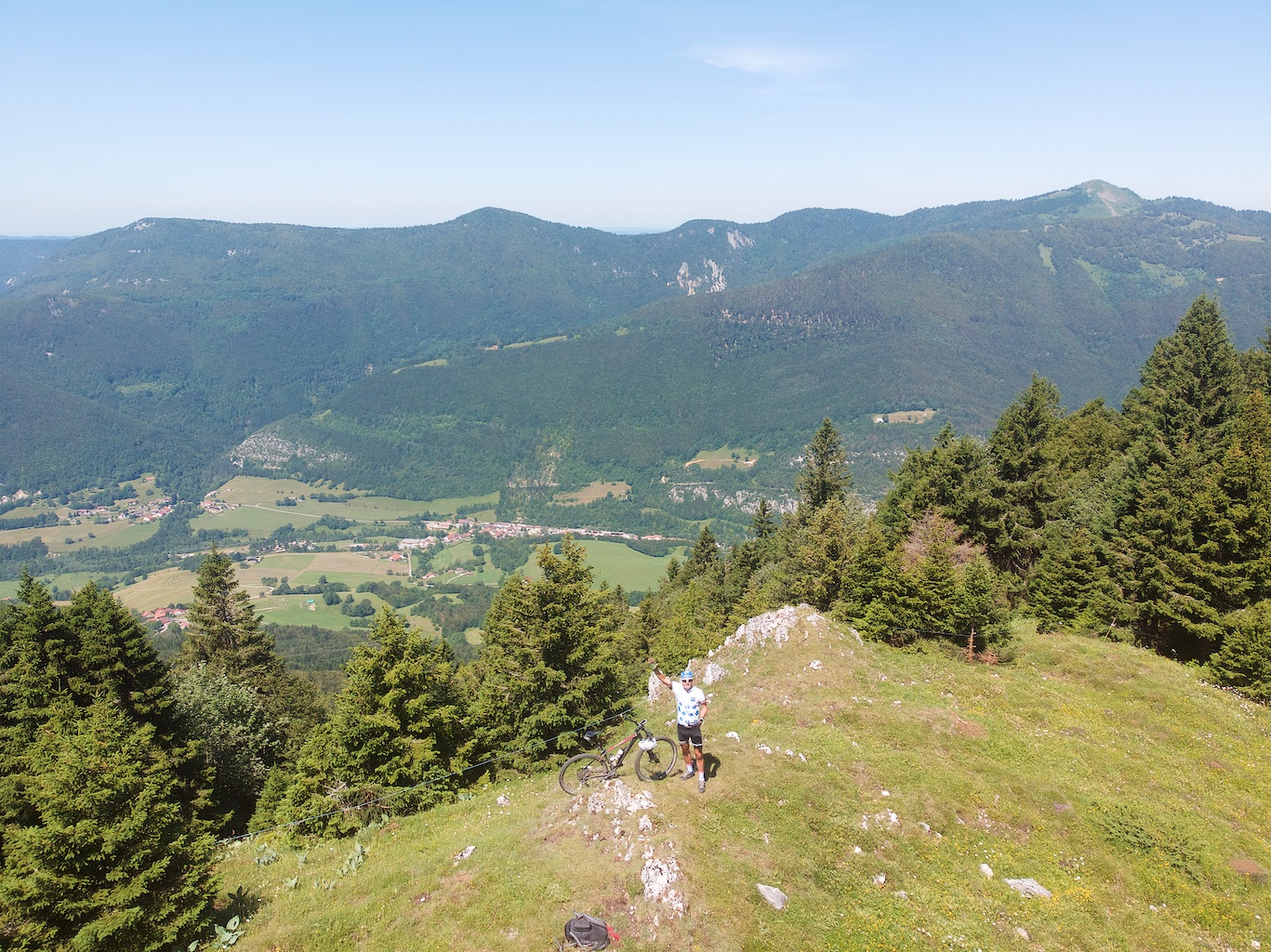 Here’s a 360 degree scrollable photo looking towards the highest peak in the Juras taken near Chalet du Gralet. There’s sometimes a great view of Mont Blanc to the south from here …. but it was too hazy today. The Chalet is in view below.

Here’s the 360 photo without the software adjustment:

The road ends at the Chalet, although there are plenty of hiking trails. But it would be hard work and involve pushing to keep going along the crest.

See here for a mountain bike ride that reached 1688 metres at Colomby de Gex a few kilometres to the north beside and only 30 metres lower than the highest point in the entire Juras.

So from Chalet de Gralet I double-backed down the hyper steep kilometres and took another road up to Col du Sac (1360m) and the Chalet du Sac (1380m). This photo is from the Col showing the road to the Chalet. 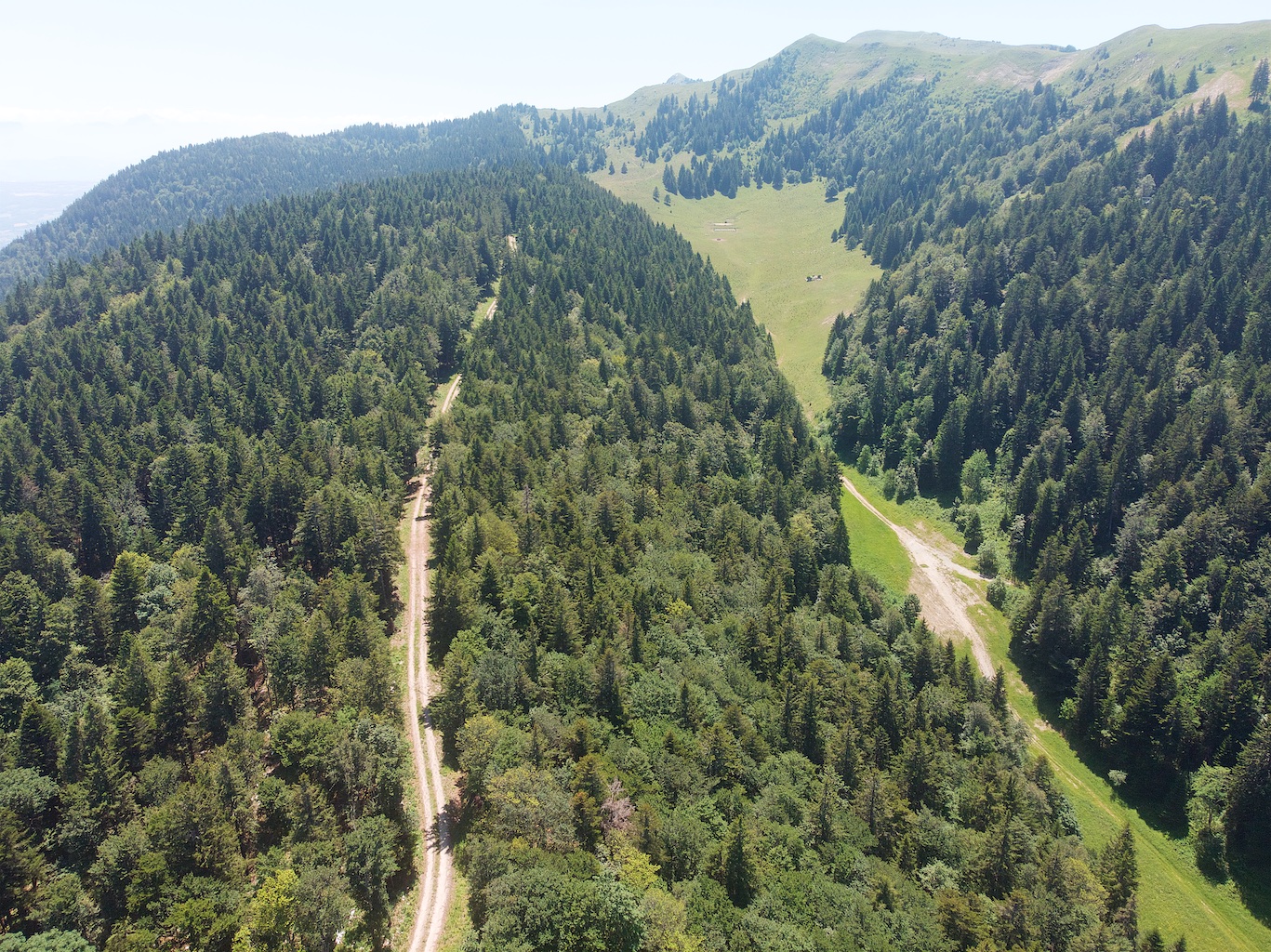 Here’s a scrollable 360 degree photo with the same view:

It’s possible to go “over-the-top” here and descend to Col de Menthières and make a larger loop. For example ” rel=”noopener” target=”_blank”>see the map in this old post. Or there are other, lower forestry roads on the same side. But I’d enjoyed my route up and decided to take the exact same way back to the start. This sort of route was almost designed for modern gravel bikes: Good enough surface except the steep final stretch to Gralet.

PS – I’ve been working on my sock game: 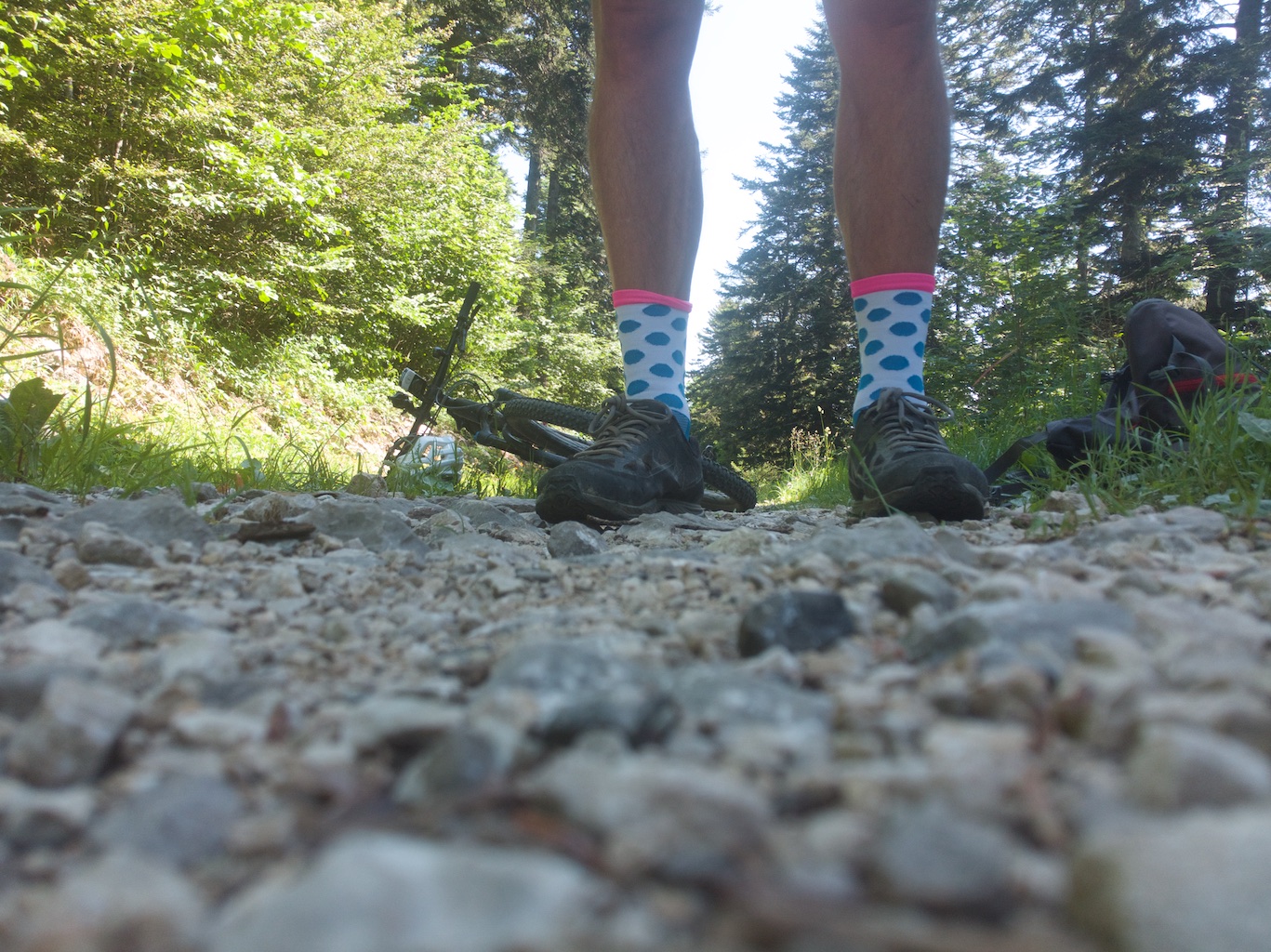