Chamrousse is a ski resort high above Grenoble.  It last featured in the Tour de France in 2001 as a Time Trial won by Armstrong.  The routes starts in the attractive Spa town of Uriage-Les-Bains.

The climb reminded me a bit of Les Arcs.  Big wide sweeping roads with great views of the valley below and the big snow covered Alps to the south.  Its steep for the first 10 kilometres but "only" about 6% average for the last ten.  Up top the clouds and mist appeared so I have no idea if it élooks like good skiing. Not bad considering my second big climb in a row.

My rear wheel had the air taken out of it at the hotel … pretty sure it was a rowdy bunch of Swiss cyclists.  And as I started descending I noticed my wheel wasn’t quite round.  Yuck.  So I gingerly made my way back to the start, happy not to crash. 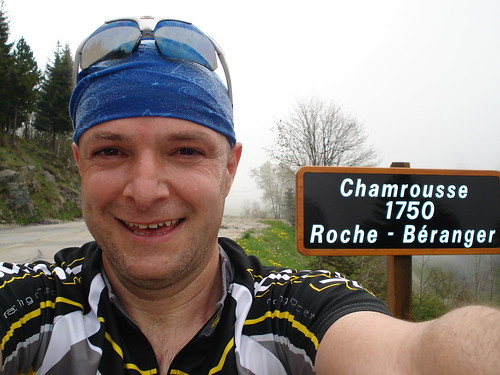