Probably the most scenic ride of the year. The route starts on the eastern edge of Lake Geneva in Montreux (home of the famous Jazz festival). I began at the Freddy Mercury statue on the lakeshore and the work began immediately.

My book had warned me that there was a stretch at 20% early in the ride. Remember 10% is very difficult and 15% almost impossible. I actually hit my highest heart rate of the ride doing about 3 kilometres an hour.

It’s an amazing route snaking above the city with unbelievable views of the lake and the Alps. This is a VERY fancy area and I passed several discrete top class hotels. After Caux – about half-way, the route gets easier – as it becomes a quiet, through-the-woods ridge ride. the last kilometre is almost straight up – and I reached the clouds so it was a tough to get a good view from the top. Lots of hiking and a nice, people-free, protected valley further on.

I brought a hybrid bike for three reasons. First, to give me an easier gear on the very steep parts. Second, because some of the winding descent was more manageable. Finally, the last few kilometres are a pretty poor surface.

I tried to descend the alternate way but some unfriendly loggers refused to let me pass – hence the re-climb in the profile. 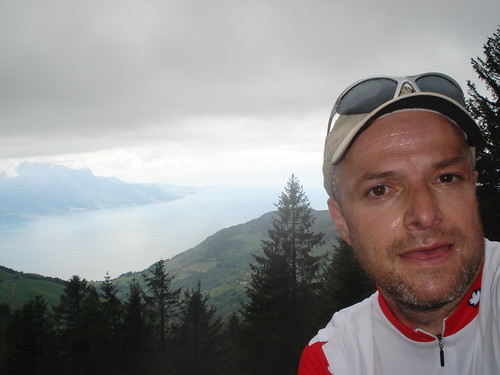