A very nice loop in the Valle d’Aosta, Italy.

While in Italy, Valle d’Aosta has French roots. Historically, it was part of the Kingdom of Savoy for most of the last millenium. It is the smallest and most sparsely populated region in Italy. Almost the entire population speaks Italian, but 75% also speak French, and 50% speak a Franco-Provençal dialect: Valdôtain.

It is on the south side of the Mont Blanc tunnel, and frankly it feels like just one giant valley, with a bunch of side valleys, all surrounded by high Alps. Yes, great for cycling.

There are a few tiny hamlets, but after the first couple of kilometres it’s quiet. There are always views down below, so one gets a good feeling of “getting higher.” A very nice, if not fantastic, climb.

On the other side is Brusson – a small ski station. I descended half way down, but my goal was to return via the Col Tzecore.

If descending, the turn-off to Col Tzecore is easy to miss and only signed if climbing. It is a tiny road in Quincod – see map.

This is a small, very, very steep road – with some very fun hairpins, and great views. It is a fantastic detour.

I have included the entire profile, but I only cycled the top half of the climb. Ouch – although it felt steeper than the below profile. 🙂 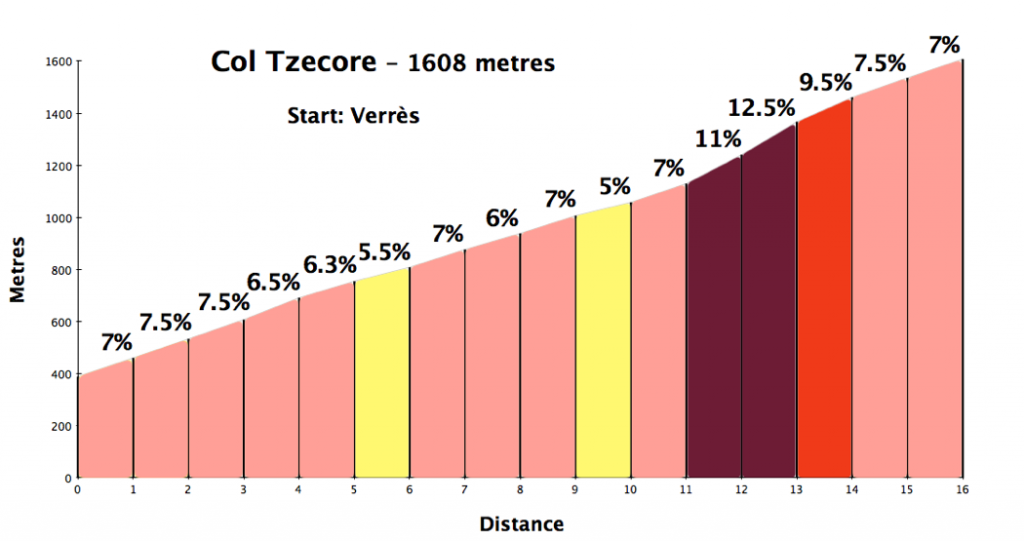 Over the top of the Col, it is only four kilometres or so to join up with the Col de Joux road. Thus by doing this loop I not only got an extra Col, but more importantly skipped the lower, busier roads back to the start that would have been necessary if I skipped Col Tzecore.

Overall, a very nice little loop on quiet roads, with views everywhere. I gave it a thumbs up: