Trending
You are at:Home»Favorites»Col de la Biche and Grand Colombier (the steepest way) 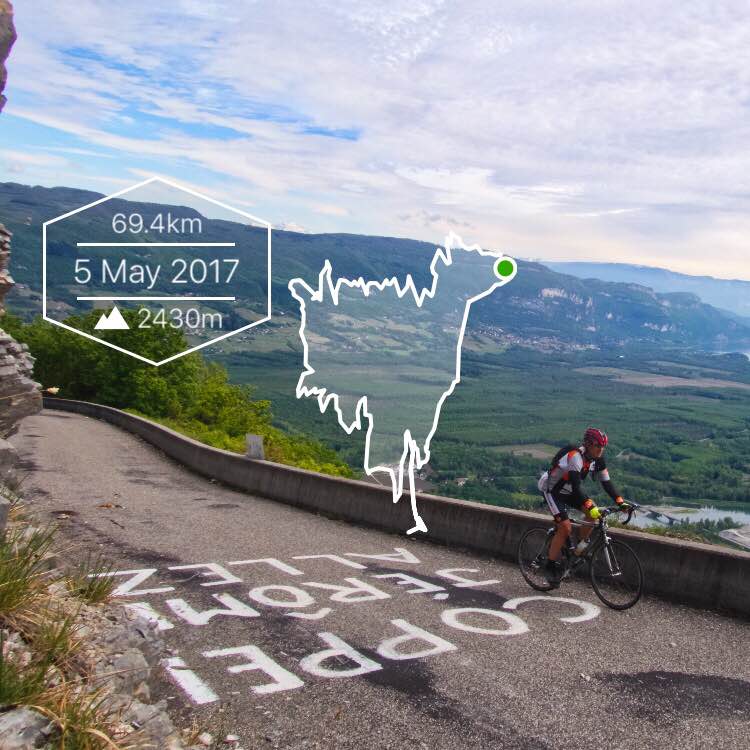 Stage 9 of the 2017 Tour de France will be the toughest Jura mountain stage ever. Easily. And along with Mont du Chat and Grand Colombier, it will introduce Col de la Biche to the lycra-clad masses. 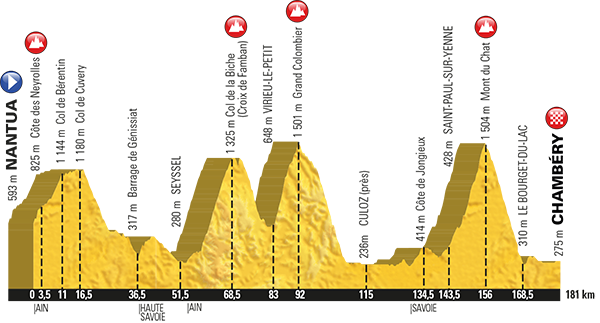 Today I rode the middle two climbs: Col de la Biche, and Grand Colombier as the Tour will climb them. This will be the first Tour appearance for Biche. It’s the third for the Jura giant Grand Colombier, but the first time from the steepest side (all 4 sides are steep).

In February I cycled a beautiful if snowy loop that includes Mont du Chat, the final climb in the above stage – see here.

Mont du Chat and Grand Colombier will receive all sorts of pre-Tour coverage as monster climbs on, arguably, the best stage of the 2017 Tour (this or the Izoard stage). But, Col de la Biche is another very challenging road. Most cycling sites/profiles will tell you it starts from Gignez, but Monsieur Prudhomme and I know that one can start two and a half kilometres lower on the banks of the Rhone river in Seyssel.

Still, it’s at Gignez where things get steep. The profile shows how tough this climb is, but there are several respites, and thus several stretches far steeper than the average km grades – often touching 13% I’d say. Much of the climb is lined with young deciduous woods that block the views but provide little shade. 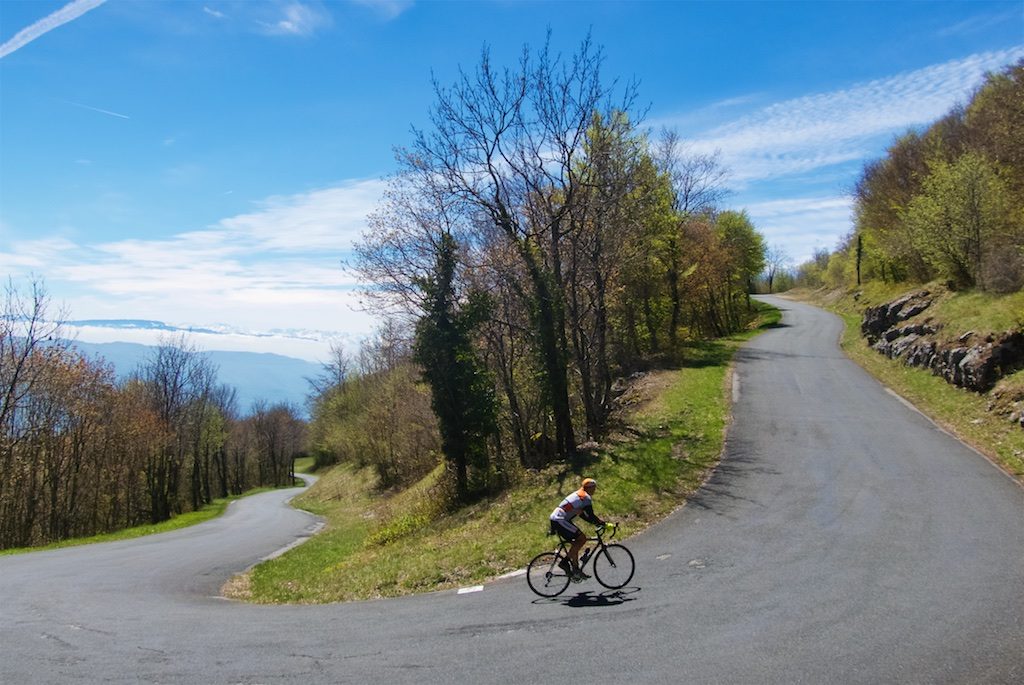 Biche is a short-cut to nowhere and there is little along the way – some cow pastures so it’s supremely quiet. You may see one car, you may not. Up higher, the views improve and the distant Alps are impressive. 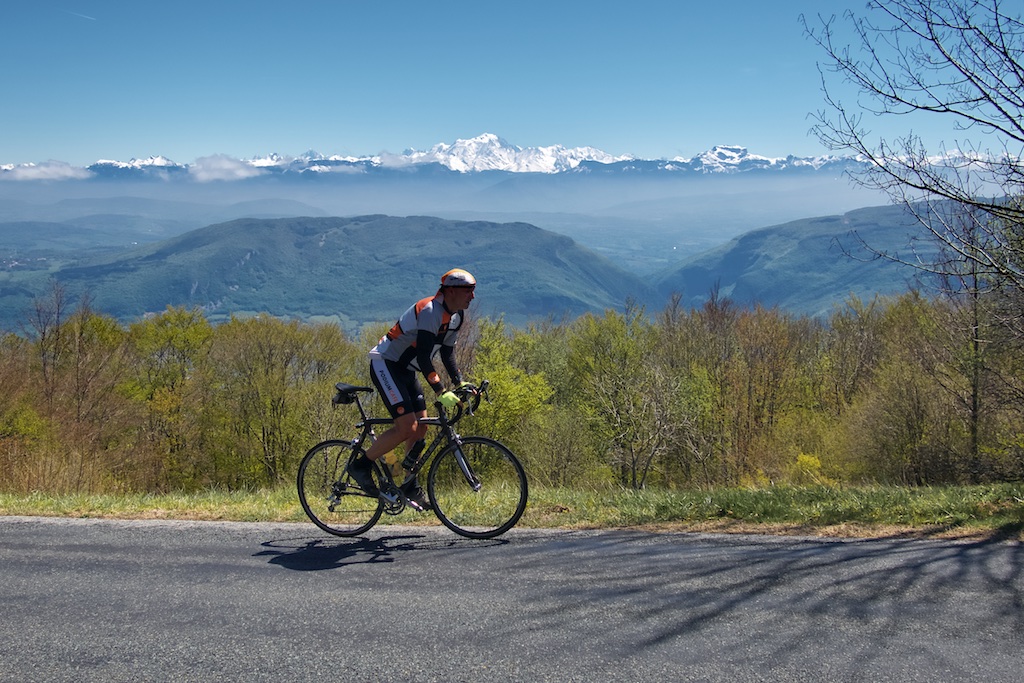 As the profile shows, the climb summits then does a short “down-up” to the Col itself. The first summit is at the Croix de Famban, a perfect spot to watch the Tour stage. Great views. 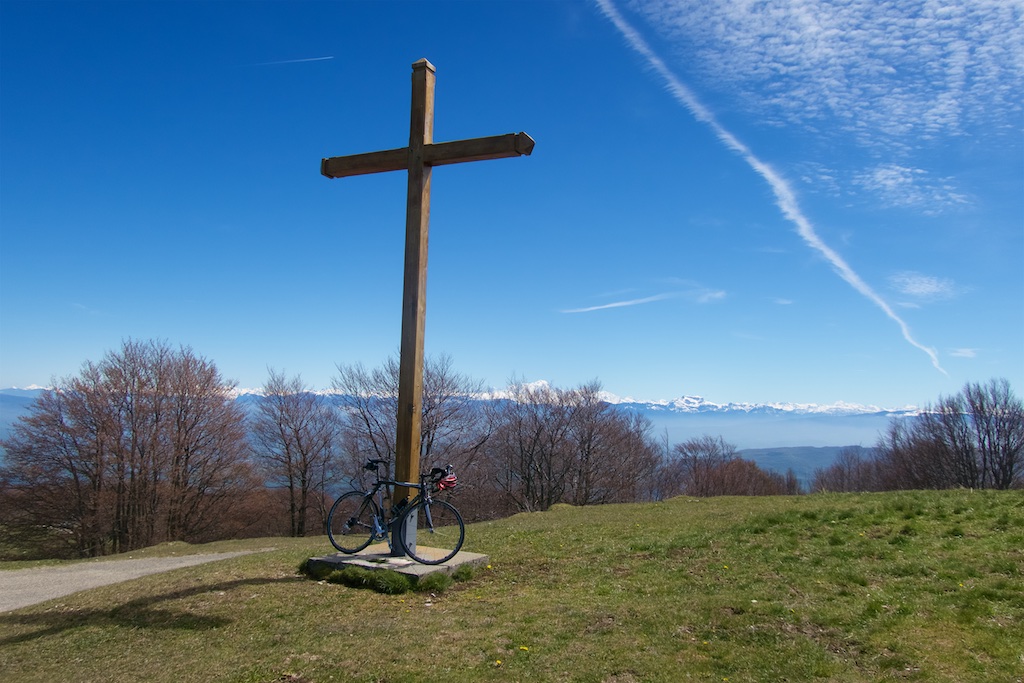 After the descent, just before the Golet/Col one can see Grand Colombier in the distance. The next stop, to the cross: 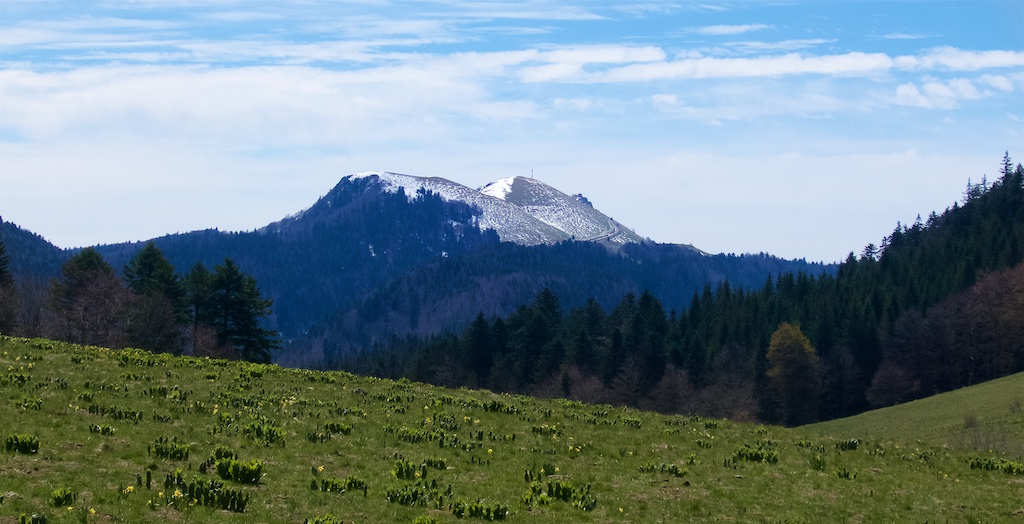 Both these descents are steep and tough, but the top 5 kilometres of Biche is particularly bumpy. I have no clue how the pros descend these ultra-steep, narrow, winding roads at such speed. Respect. I dawdled down. I would pass Lochieu (lots of villages end in -ieu in this valley), the start of the easiest of the four ways up Grand Colombier, but would continue a few more kms to Virieu-le-Petit for the real “fun.”

See here for details of all 4 sides of Grand Colombier.

The first time I heard about the ultra steep variant up Grand Colombier, my friend told me: “but don’t descend it, it’s too dangerous.” Ha, sound advice. Coming from Biche the Tour (and I) skipped the lower easy 7 kilometres of the climb (which starts in Artemare). I, as the Tour will, turned up at Virieu-le-Petit. And I do mean up. This early steep stretch is basically a short cut of the route that the Tour climbed last year. The last 5 kilometres share the same route. 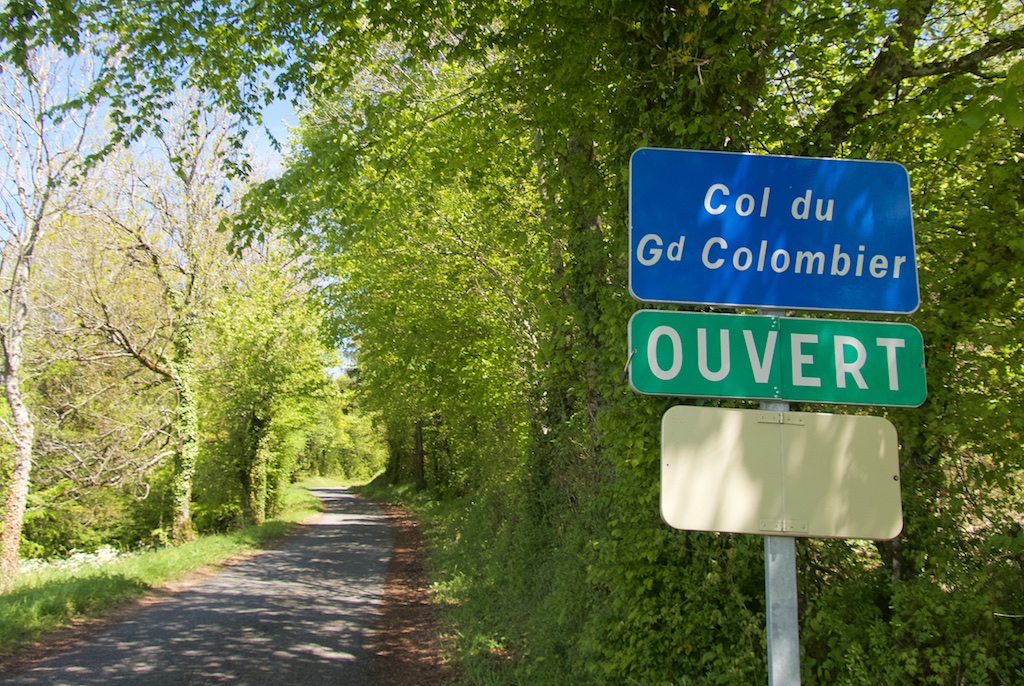 The steep short cut is on a tiny road.

It’s a surreal experience to be cycling for a couple of kms at 12% then see the road ahead get noticeably steeper. The road maxes out at 22% and for perhaps several hundred metres it pushes 20%. My goal was just to not put foot to ground. I succeeded, often approaching speeds as high as 5 km/ph. Ouch. 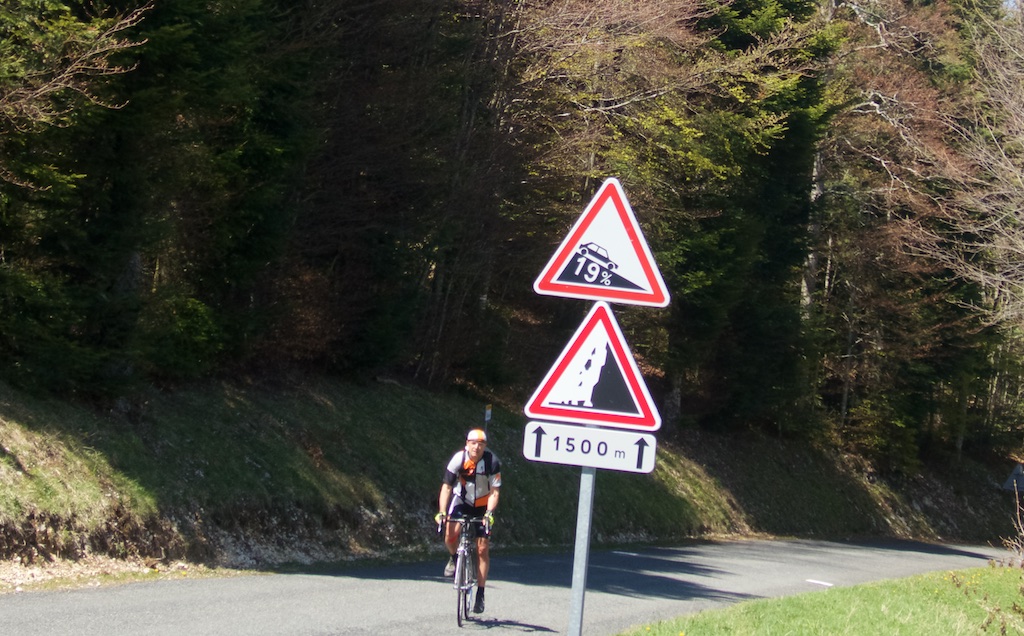 There is a brief respite, but the last 2.5 kms get steep again. A few metres below the summit would be a great spot to watch the Tour as one can see the last couple of kilometres below. 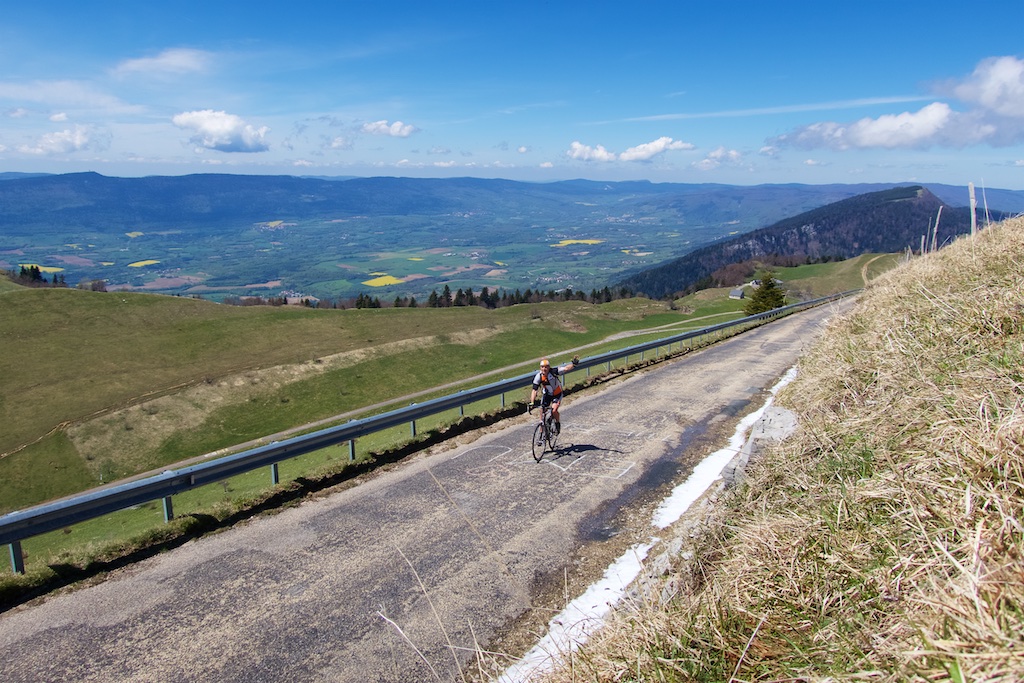 On a clear day, just metres from the col, the view of Mont Blanc – FAR away – is fabulous. 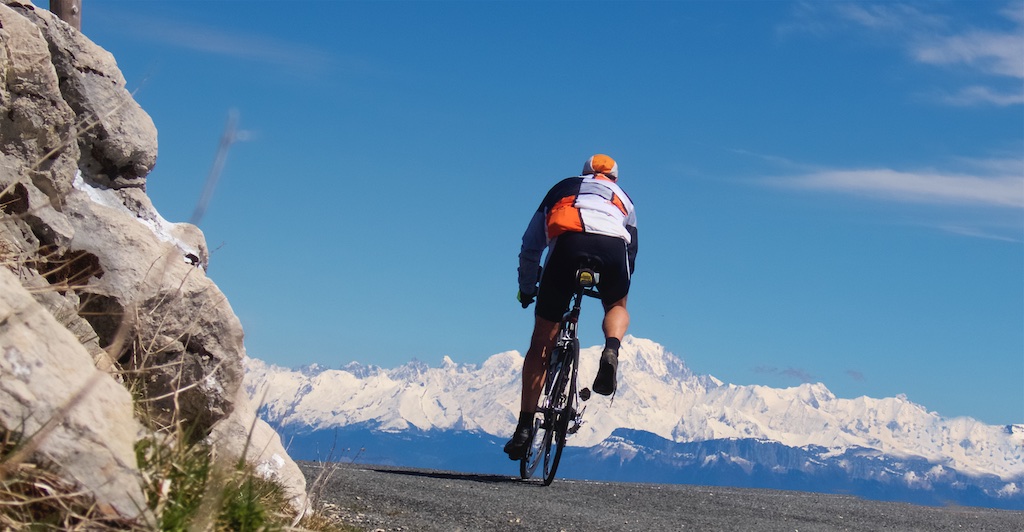 Unclipping, almost as though the photo was staged. 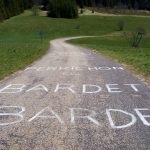 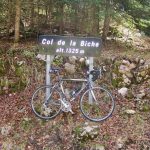 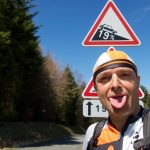 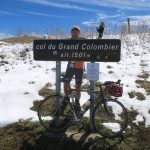 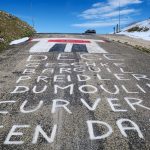 A Landslide on Culoz Variant

UPDATE: June 26th, the Coluz side has been re-opened. Great news.

The plan was to descend – as the Tour will – to Anglefort. But along the way, I wanted to have a look at the Culoz side. Making its Tour debut in 2012, the Culoz side is by far the most scenic of the four sides. Branded as Les Lacets (hairpins) du Grand Colombier, these hairpins jutting out the south side of the massif offer terrific views of the Alps, Lac du Bourget, the Rhône river, etc. But this March, below the hairpins, there was a major landslide. The road is expected to be closed until at least 2018. I snuck around the road closure sign where the route joins the Anglefort side and descended to Les Lacets. It was a touch rocky as it hadn’t been cleaned but it is still stunning. 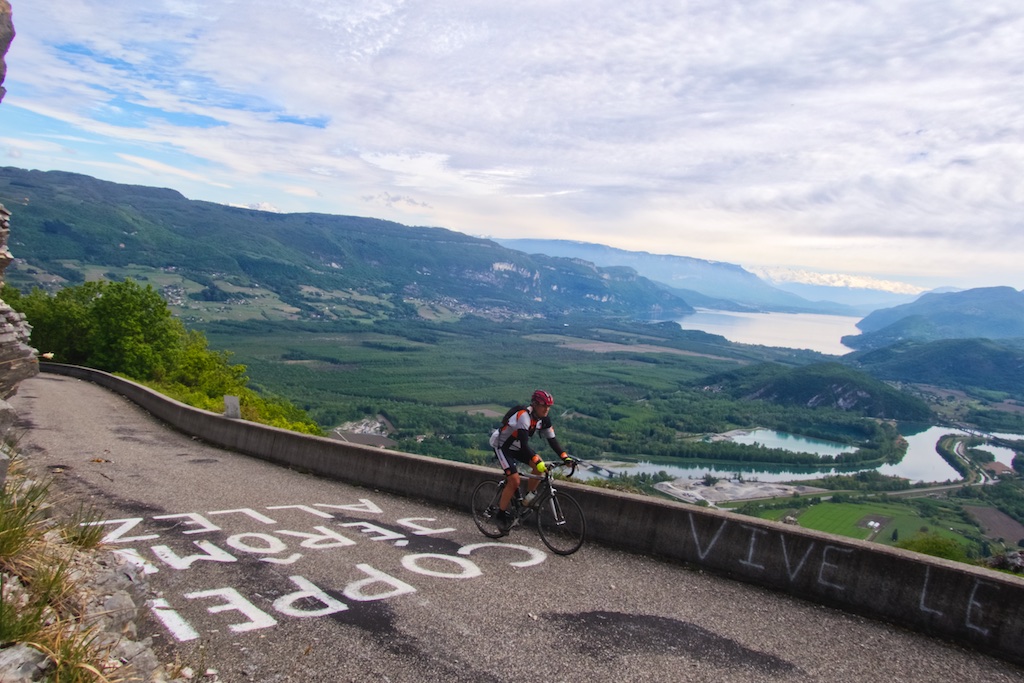 Lower down I ran into the edge of the landslide. Apparently, huge boulders ran up alongside houses. And it’s far more than just fixing and clearing the road. The authorities will want to ensure the cliffs above have been made safer – not easy. 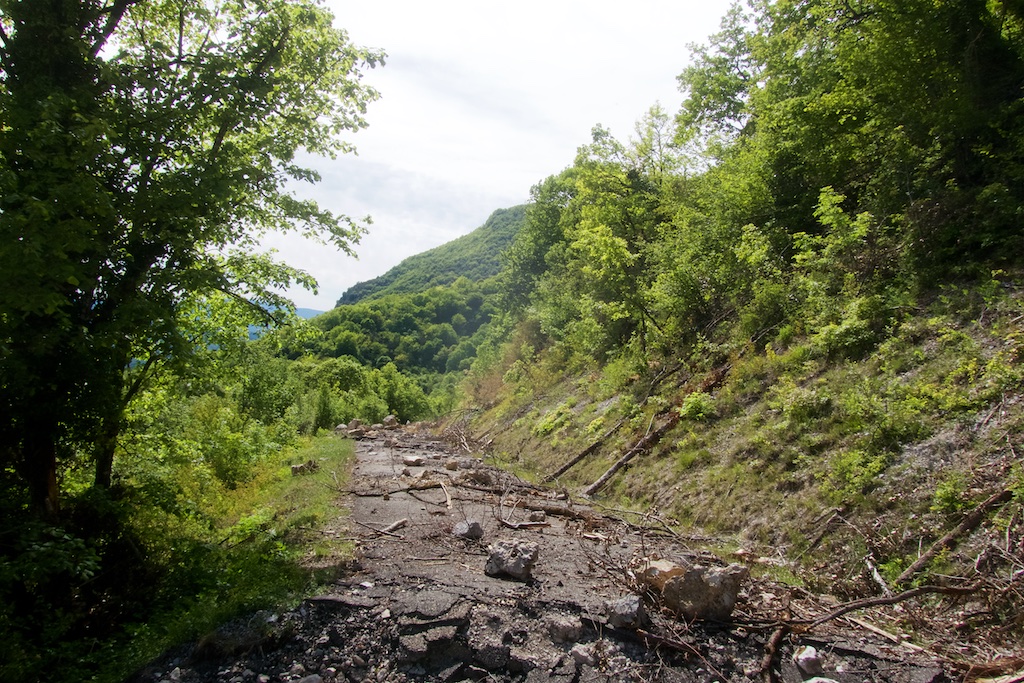 Luckily the wonderful hairpins just above are fine.

The local authorities sponsor car-free days on the 1st Saturday (Jun-Sept) of every month – usually up this side. This year they will ride the Artemare side instead, due to the landslide. Well done for not canceling this event. Details here.

Of course, I had no intention of trying to bypass the debris. So I just turned around and enjoyed climbing back up through Les Lacets: 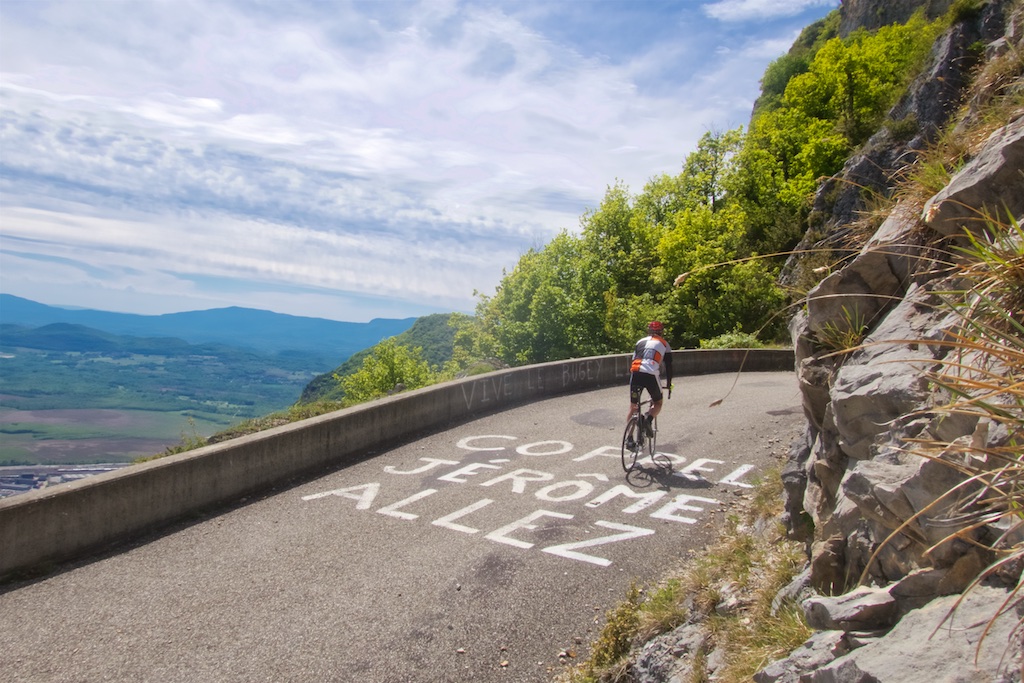 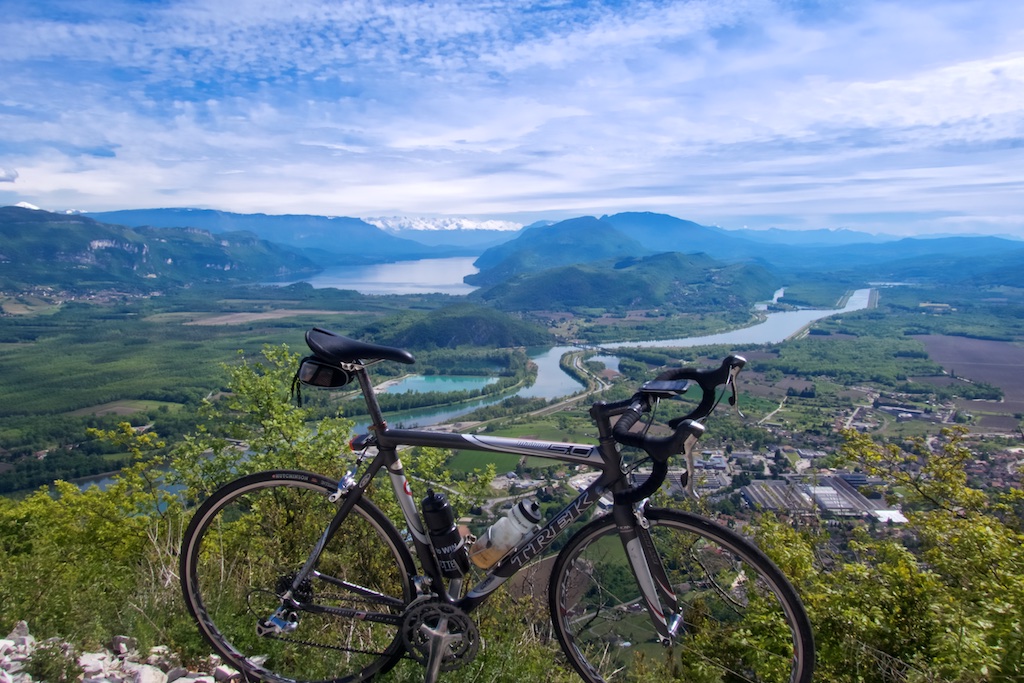 Finally, I descended back to Seysell. The last couple of kilometres being the only time I saw any real traffic – nothing much though. 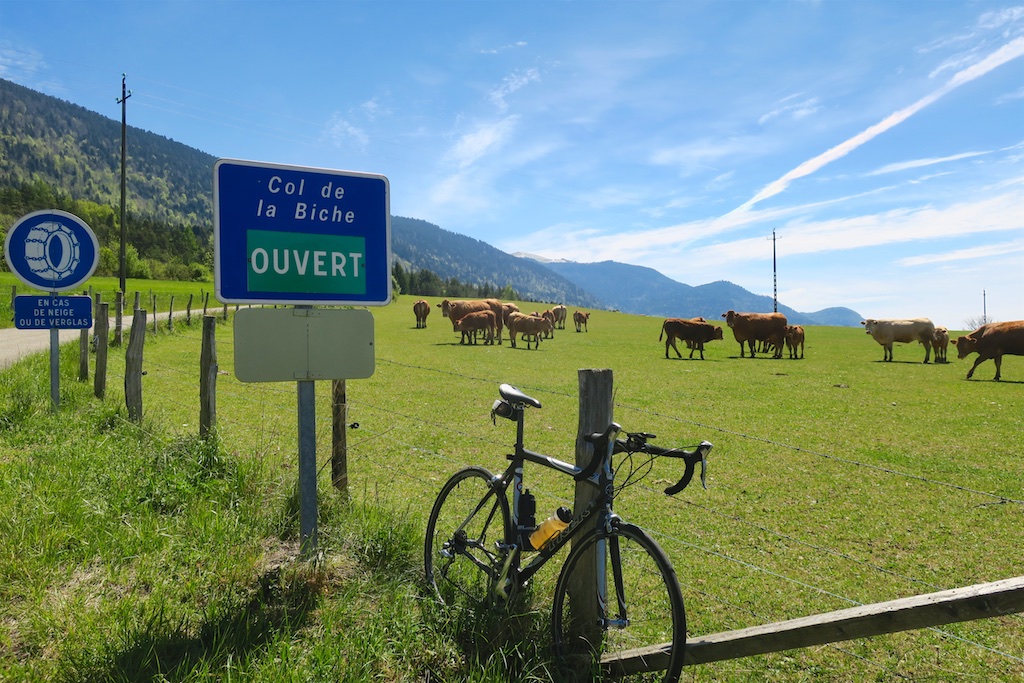 This is a superb, but hyper-challenging little loop. If you don't like steep roads then avoid. I had to think long and hard about the "fun-factor" score below. 😉