I had never done the east side of Col de la Croix de Fer, in part because the route includes 4 tunnels in the middle – and I hate tunnels. 🙂

But by taking an alternate route up Col du Mollard – I could rejoin the classic route 15 kms from the top – and miss all four tunnels. This adds over 400 metres of climb – a fair price in my book.

From the start to the top of Croix de Fer was about 41 kms with just under 2000 metres climb – and a 6 kilometre descent in the middle.

Col du Mollard was a very pleasant surprise. The first 10 or so kilometres was through the woods and had roughly 40(!) hairpins. Zoom the map near Villargrondran. Very cool.

From the top of Mollard are great mountain views as well as ski lifts from the many ski stations in the area.

I could see a couple of the tunnels as I descended Mollard and at Belleville rejoined the main route.

After passing through ski stations, the last seven kilometres get interesting. The road hairpins up the side of the mountain to the Col. 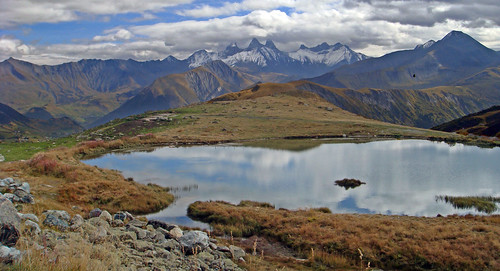 At the top, I added some layers and descended down to Col du Glandon and back to the valley below.

A great loop up high in October!