Col de la Croix de Fer is usually the first of the giant Maurienne valley cycling climbs to open after a long winter. So while Iseran, Galibier, Madeleine, and even Glandon are still closed, I dashed off to visit an old favourite.

Of the five ways up Col de la Croix de Fer – see here – the lower stretch of the direct route from St-Jean-de-Maurienne is perhaps the least interesting. So this challenging loop bypasses it by first visiting the ski station of La Toussuire.

In recent years, La Toussuire has hosted several Tour de France stages, most recently in 2015 in a stage won by Vincenzo Nibali. From St-Jean-de-Maurienne, there are three or four routes up.

I took probably the least well known: via Jarrier. (details via Fontcouvert here) – but they all share parts of the same road and are reasonably similar.

I am not going to argue that La Toussuire is even remotely one of the best climbs in the Maurienne valley. But it’s a big, quiet enough, and plenty of beautiful mountains views. 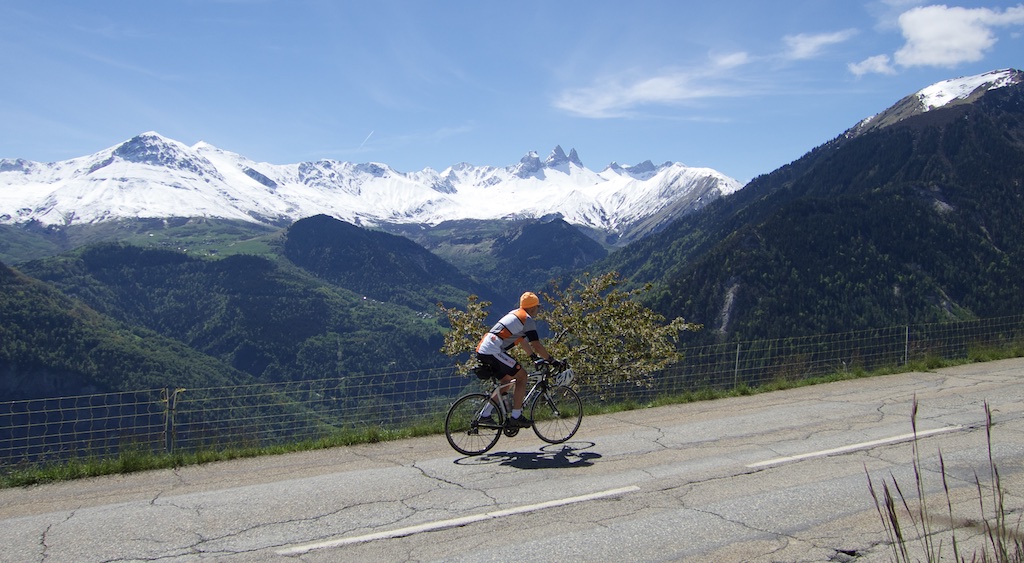 Next, I made the long descent to join the direct way to Croix de Fer. Unfortunately, there is no way to join this road higher up, so this becomes a ride of two big ascents, ultimately joining the route 25 kms (!) below the summit.

This is a very uneven climb, sometimes easy, sometimes long stretches at 10% or more, etc. There are three tunnels in quick succession perhaps 18 kms from the col (boo!), but they are wide, well lit, and virtually flat – even this tunnel-coward was cheerful enough. But the highlight of the route is without a doubt the final 6 kilometres above Saint-Sorlin ski station. 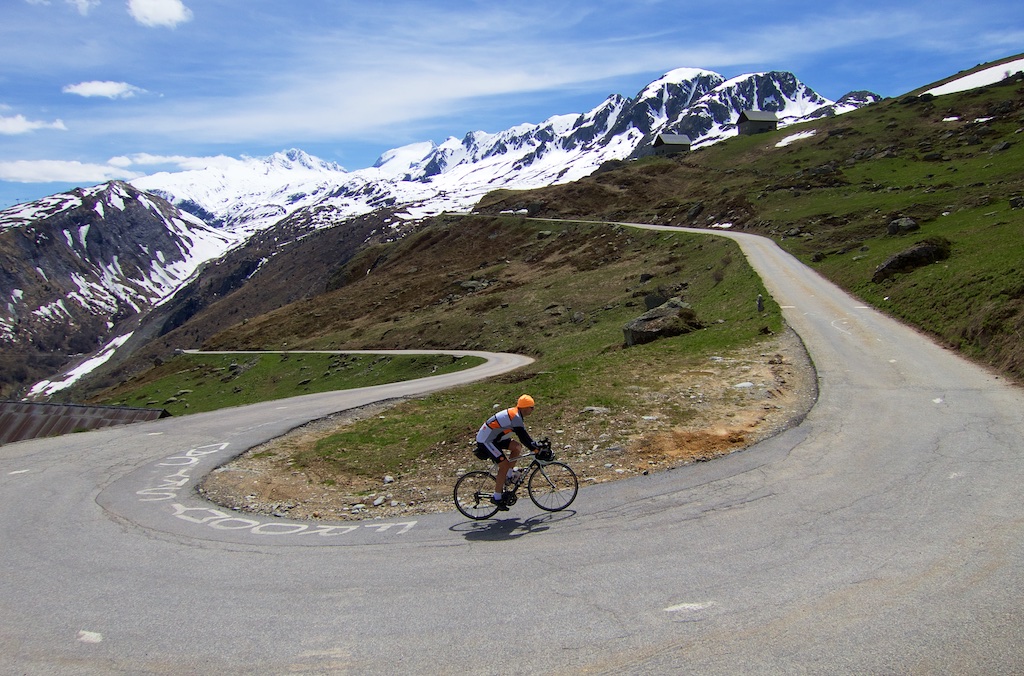 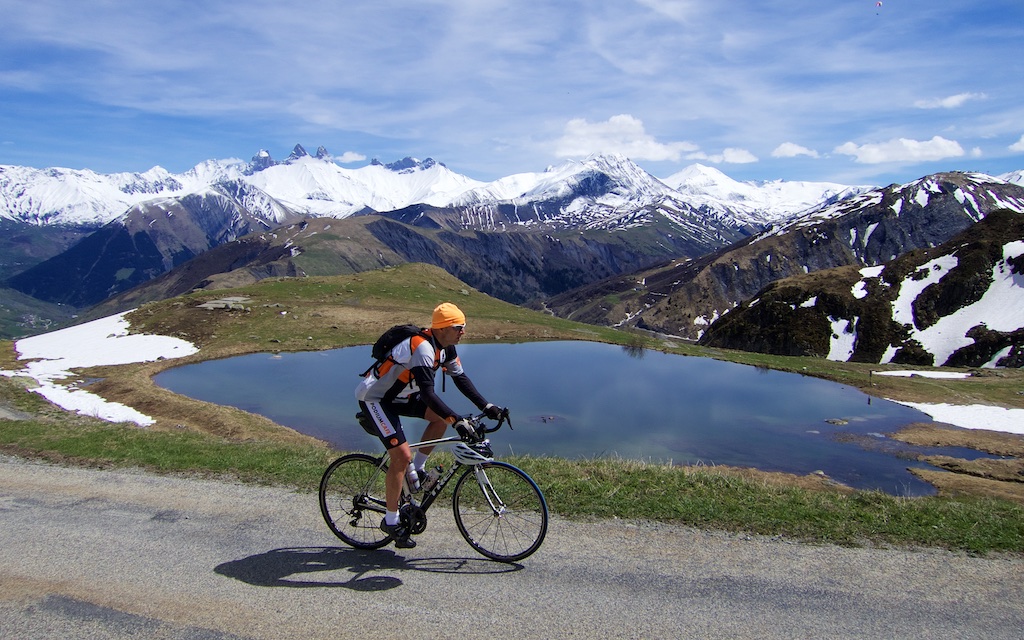 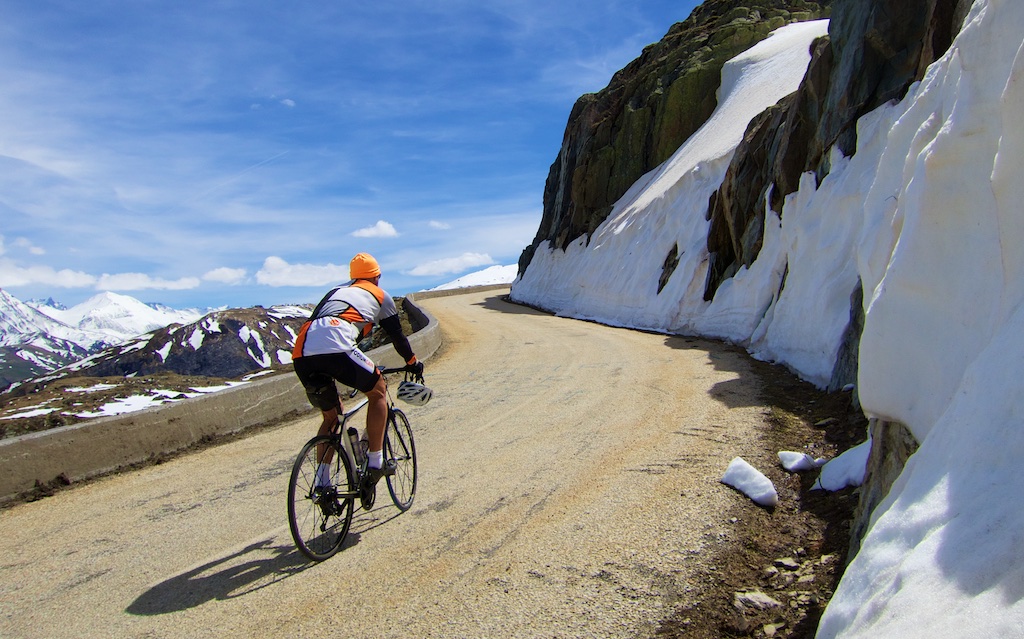 Borne with a view

Hot Mountain Bike Tip: Exactly at the col, behind the little parking lot, is an unpaved road that goes much higher to two beautiful lakes/dams, a couple of cols, and eventually to the Glacier de St-Sorlin. Truly amazing: details here. 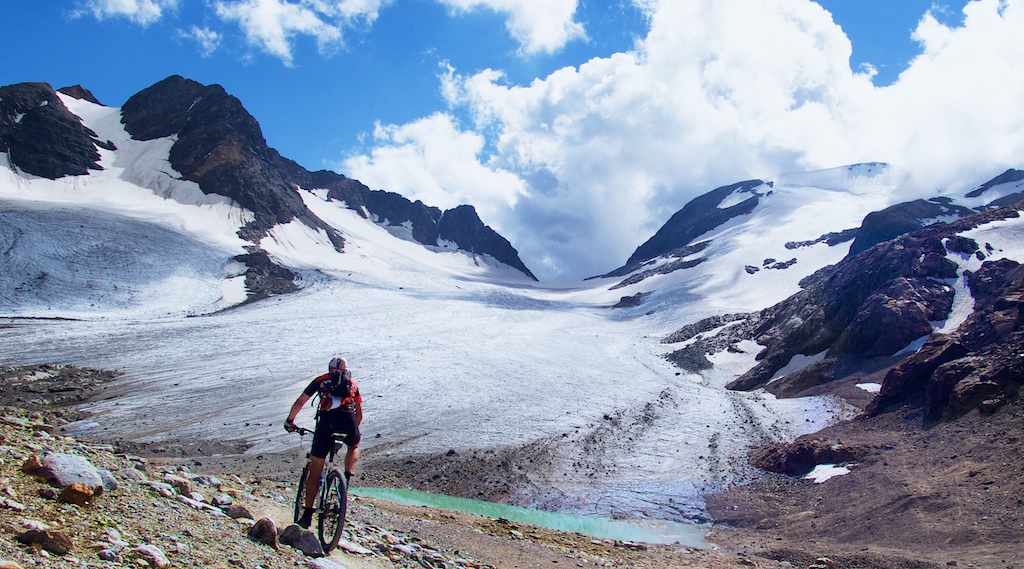 Back to the ride: It makes me very happy that Col de la Croix de Fer (Pass of the Iron Cross) actually has an Iron Cross at the summit. I took my usual celebration photo: 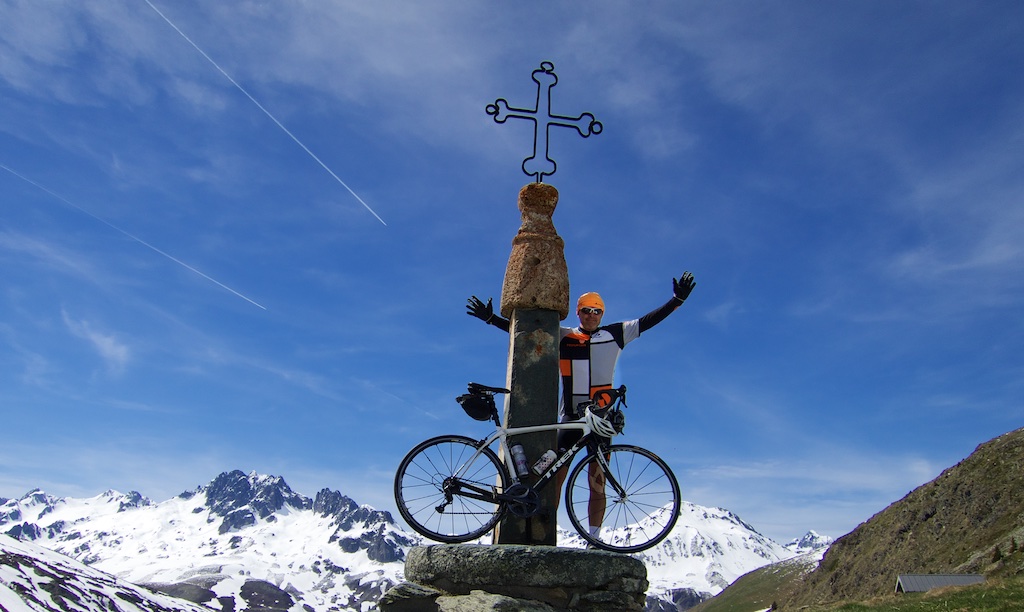 Pass of the Iron Cross

Next, I descended the other side to visit the nearby Col du Glandon. I knew it was officially closed but there didn’t seem too much snow around and I thought I’d see if I could descend it.

The final hairpin is one of my very favourites: 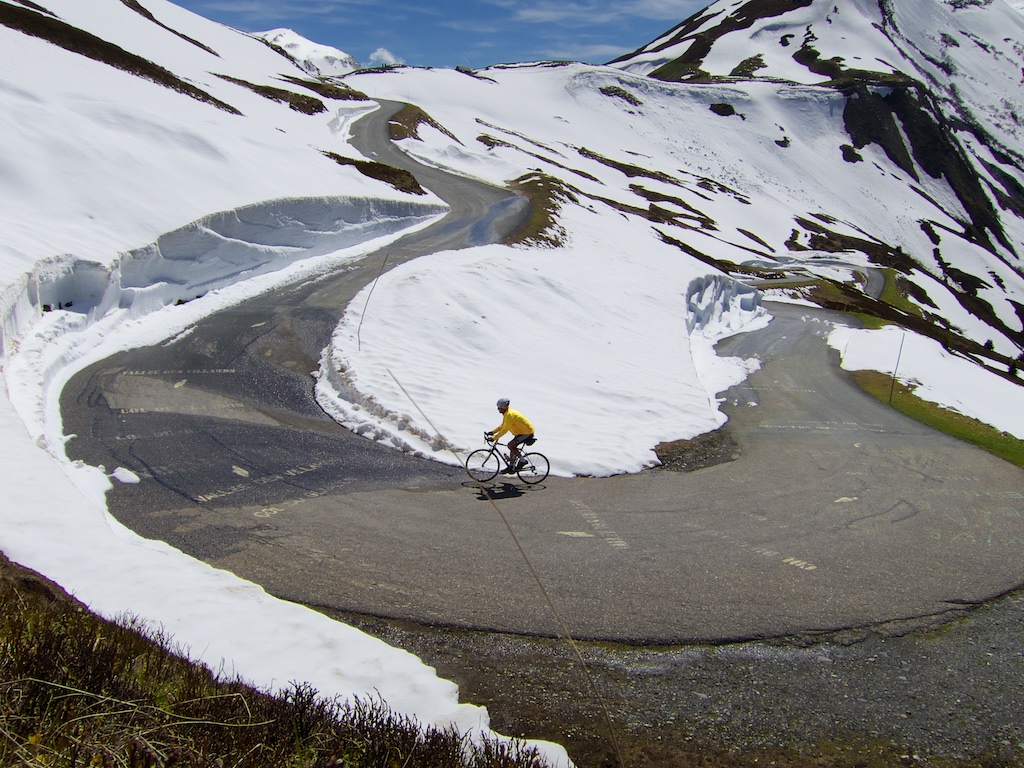 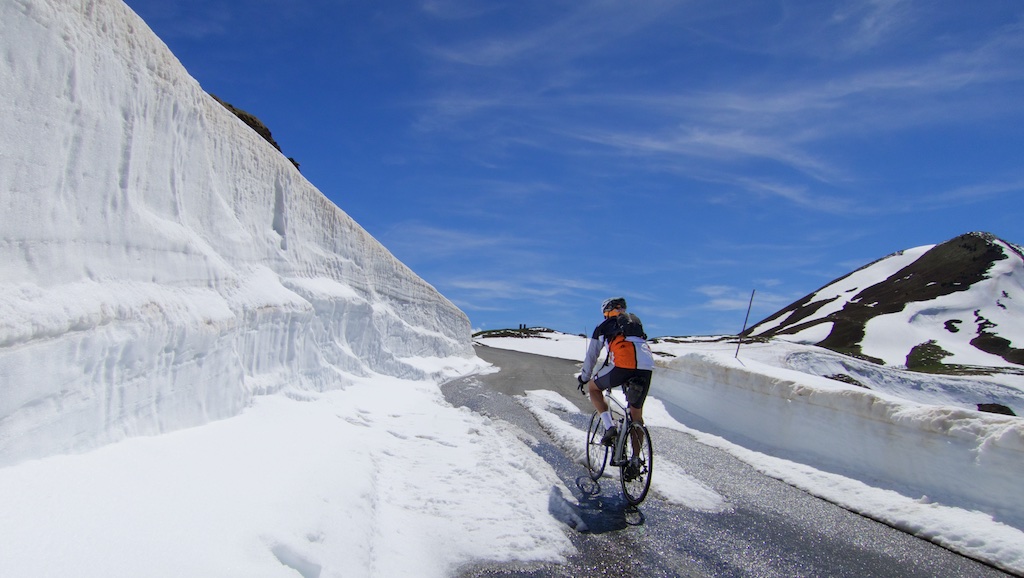 Below that final hairpin are a bunch more that don’t get much sun, and get avalanched on all winter. A few stretches still needed to be ploughed. I decided to try a couple of snow portages. Frankly, it was probably a poor idea. I’d recommend waiting until the road is officially open in a week or two. But I made it. 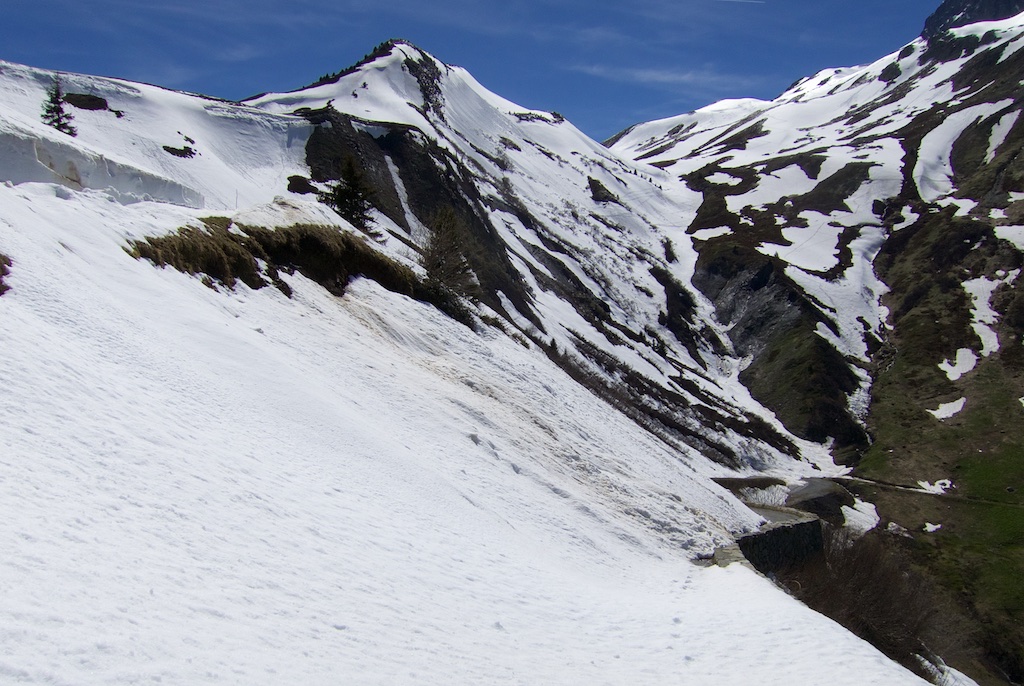 Dodgy descent. Do not try.

At least after making it over the short stretch of snowy road, it was a very quiet descent. This is a fun, but (for me at least) tough loop. But it’s always worth the effort to see a high pass so early in the season.