This route requires significant hiking at times, both up and down some stretches. It’s not an easy ride. It’s a pretty good 3D video of the route.

The climb starts in Entremont, just above Le Petit Bornand. It’s paved for the first couple of kilometres but then becomes a gravel road of varying quality. And it’s steep: 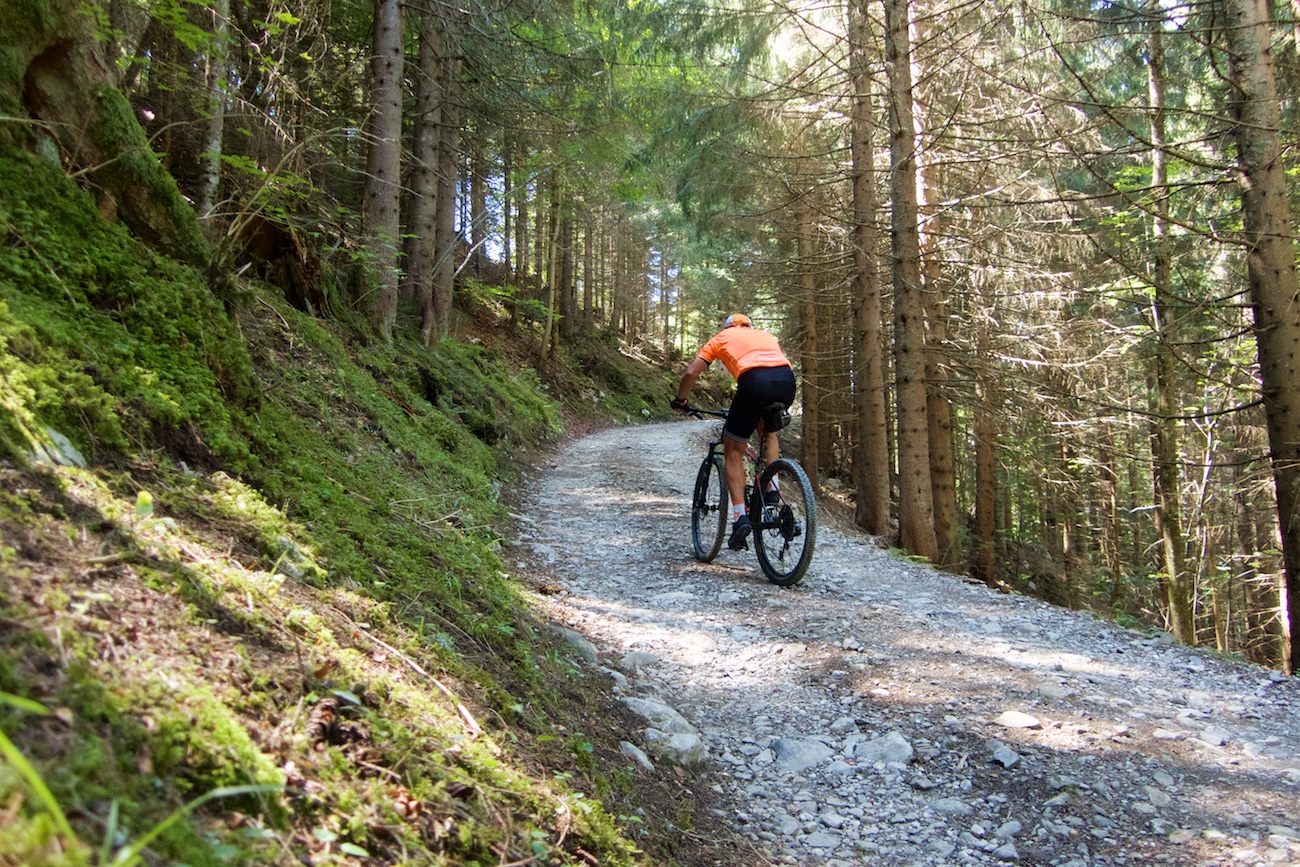 The opposite side of the valley is the road to Plateau des Glières. There is a little know unpaved route to Glières from Entremont – see here. Or the super steep paved route from Le Petit Bornand that appeared in the 2018 Tour – see here.

Perhaps three kilometres from the Col, the route leaves the forest and opens up into a steep valley with a few farms/chalets. Col de la Forclaz (1844m) is in view directly above 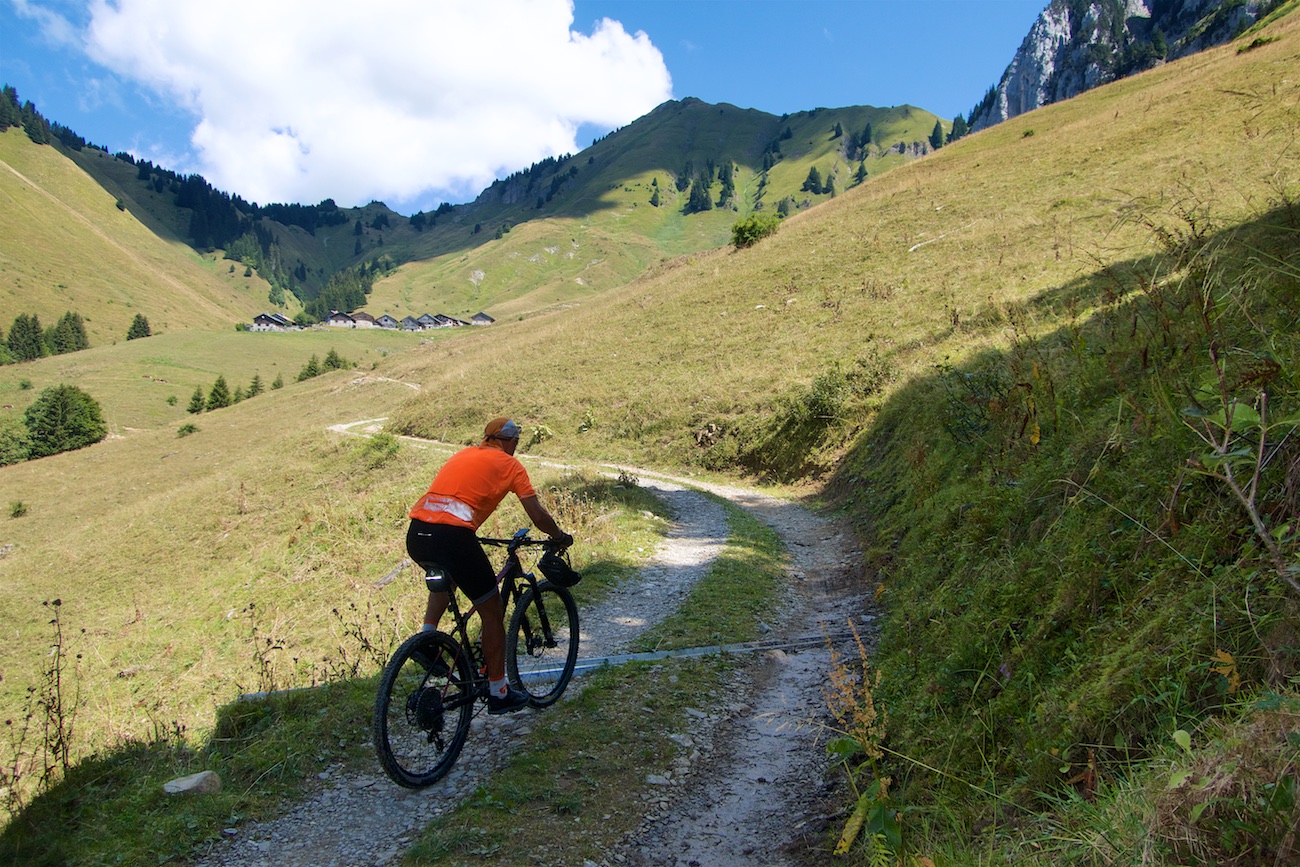 After the chalets the route gets hyper steep. It’s still a gravel road (I would see one car) but it’s a terrible surface and often over 30% – I doubt even the strongest rider could cycle much of this. Too steep and slippery. I walked almost this entire stretch and it’s a long stretch – over 300 metres of ascent – I just want to be clear. 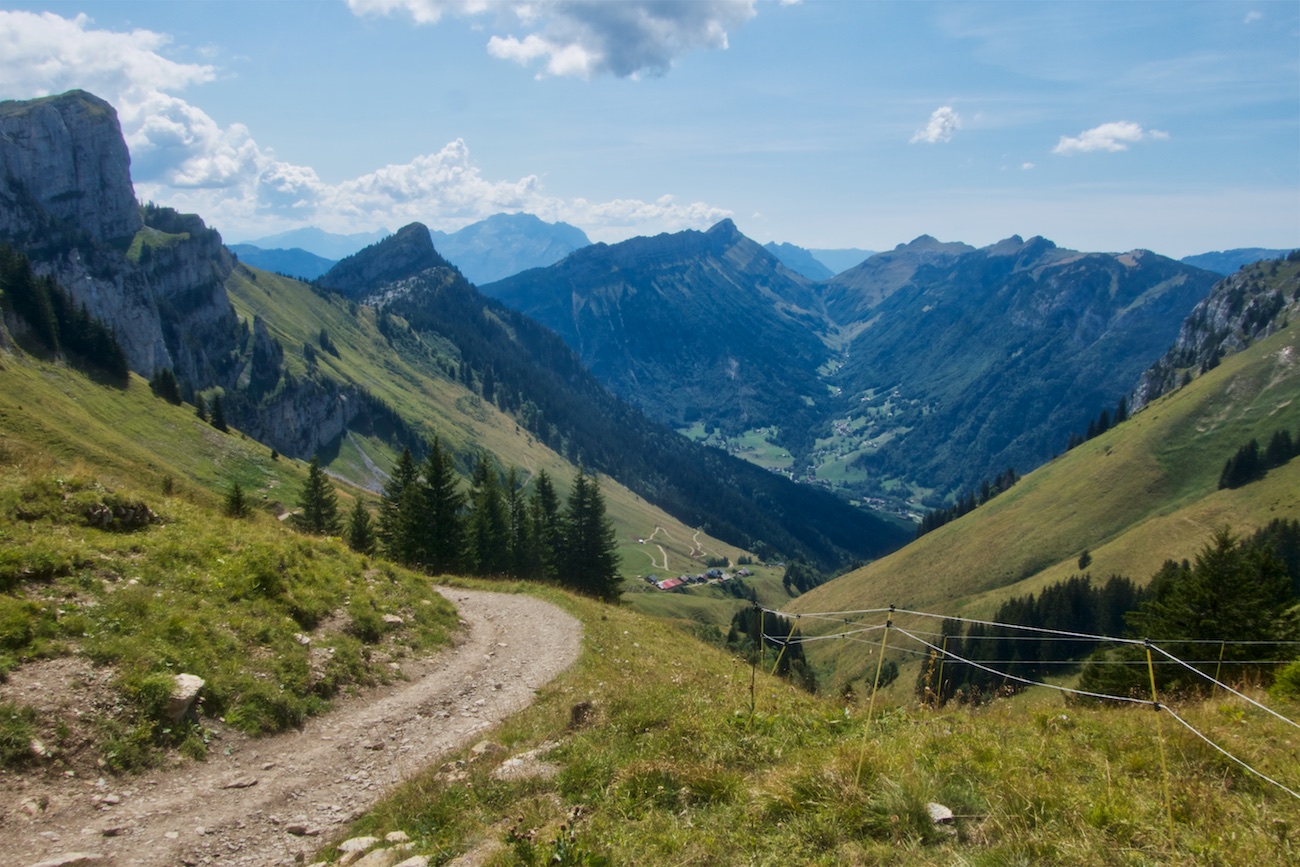 Lac de Lessy (1730 metres) is not far over the top of Col de la Forclaz. Below, the mountains on the right are the mountains over-looking Col de la Colombière on the far side – it’s labeled on the map below. 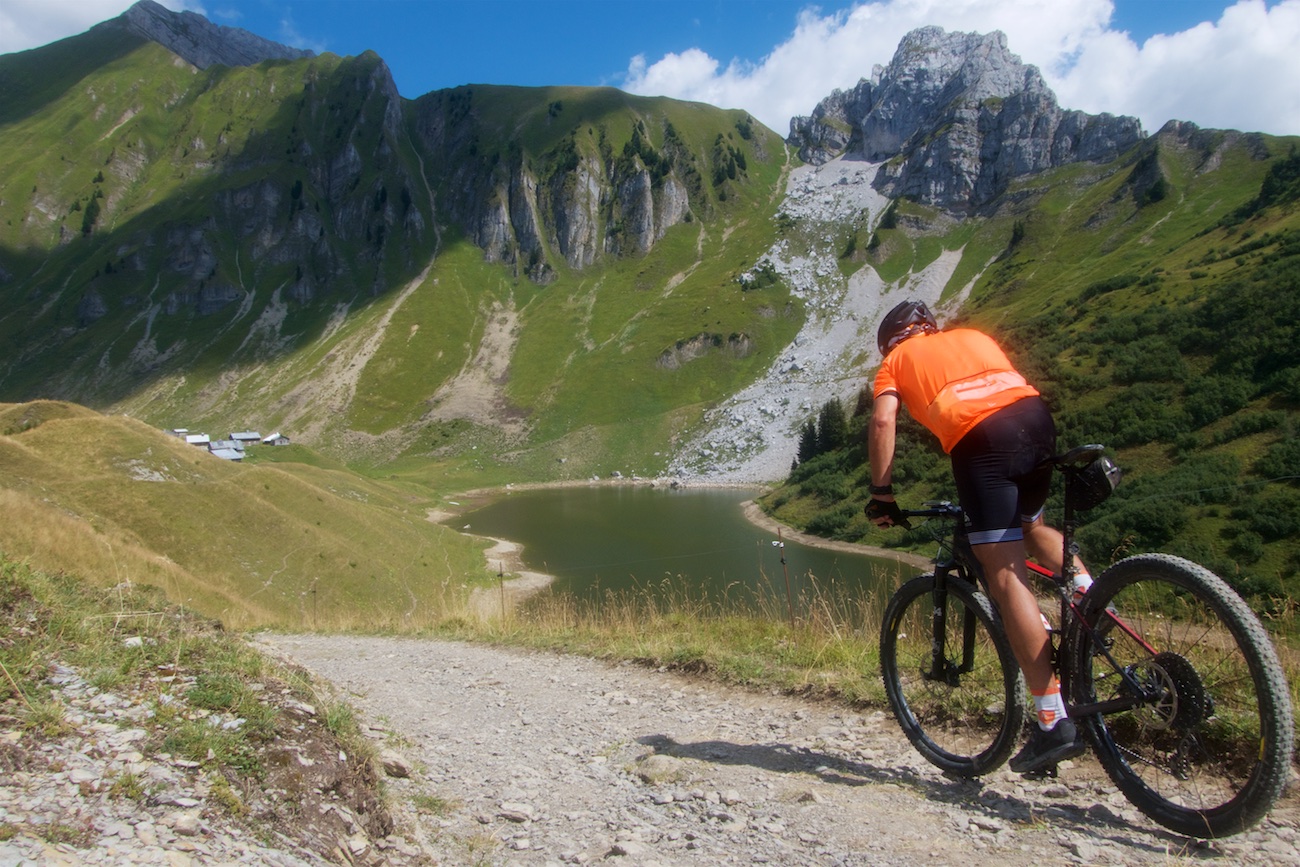 At Lac de Lessy are a few buildings and a restaurant/buvette. There were quite a few hikers, all a little surprised to see a fool cyclist here. The “road” ends here but I followed the trail up to Col de Sasay (1950 metres). Again, some pushing required. 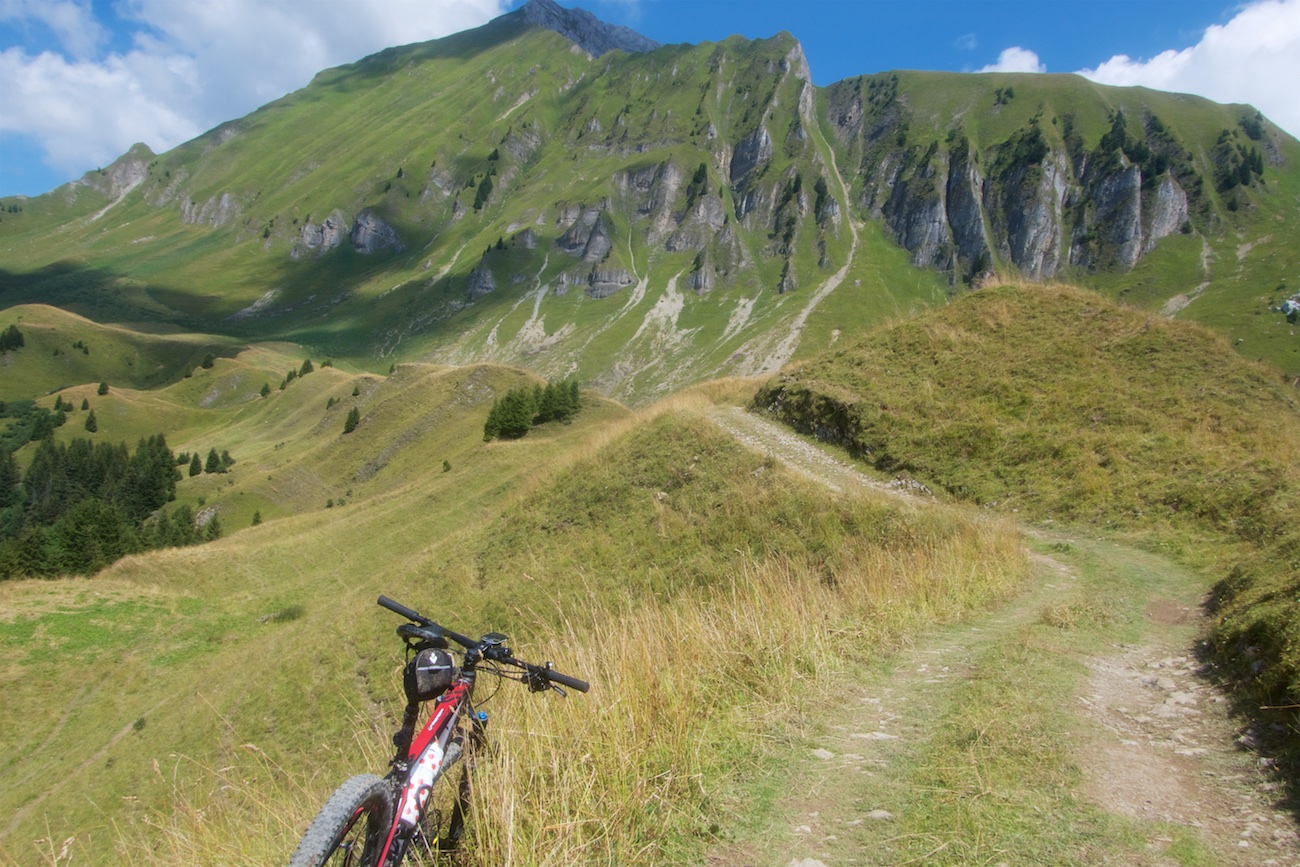 On the way to Col de Sosay – upper left 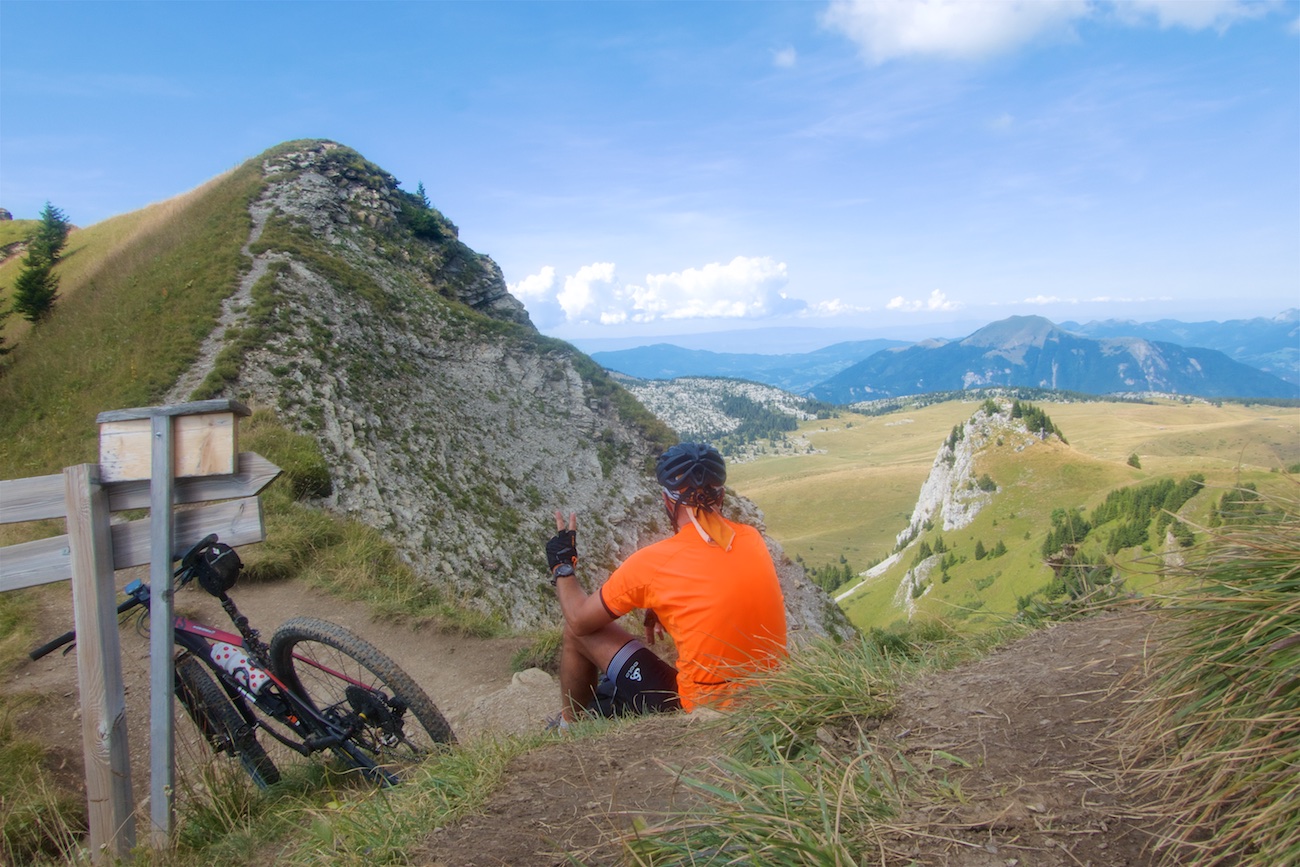 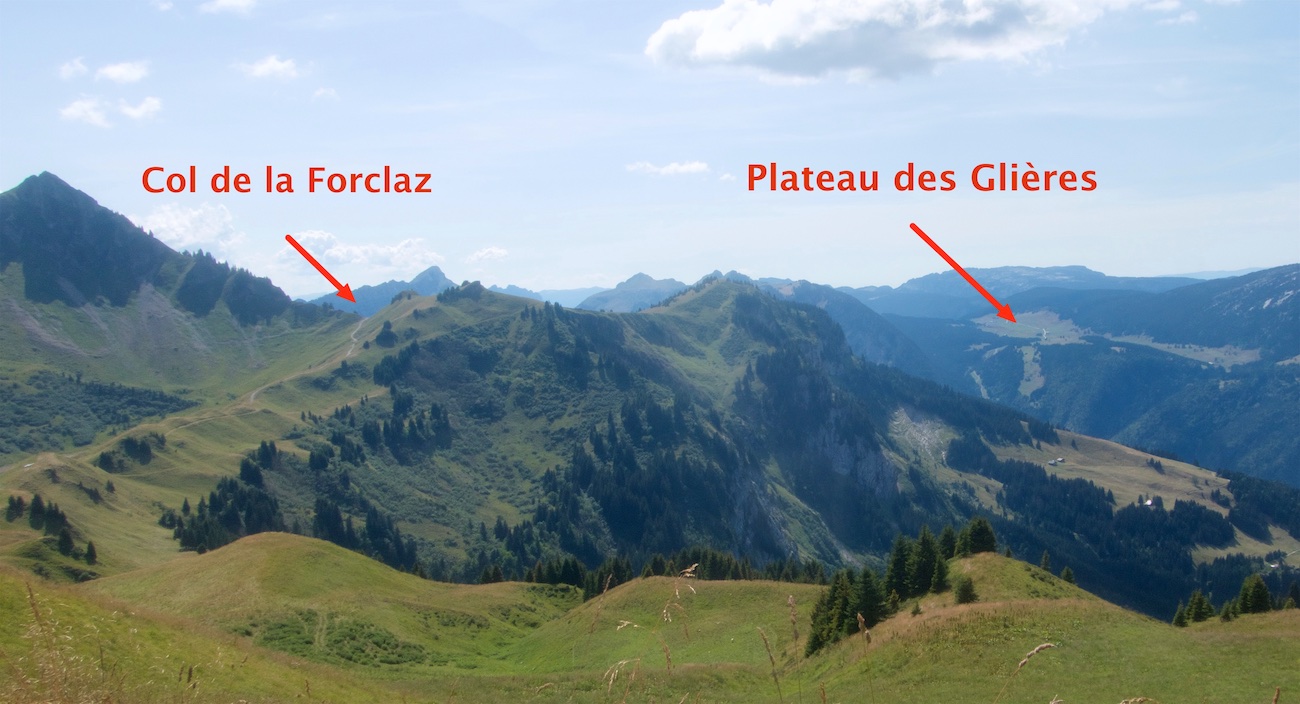 Now for a serious warning: It’s a tricky trail down the far side of Col de Sosay. Tricky even without a bike. In a few places I was very careful where I placed my feet. But it’s a signed hiking trail. People without vertigo will do better than me. 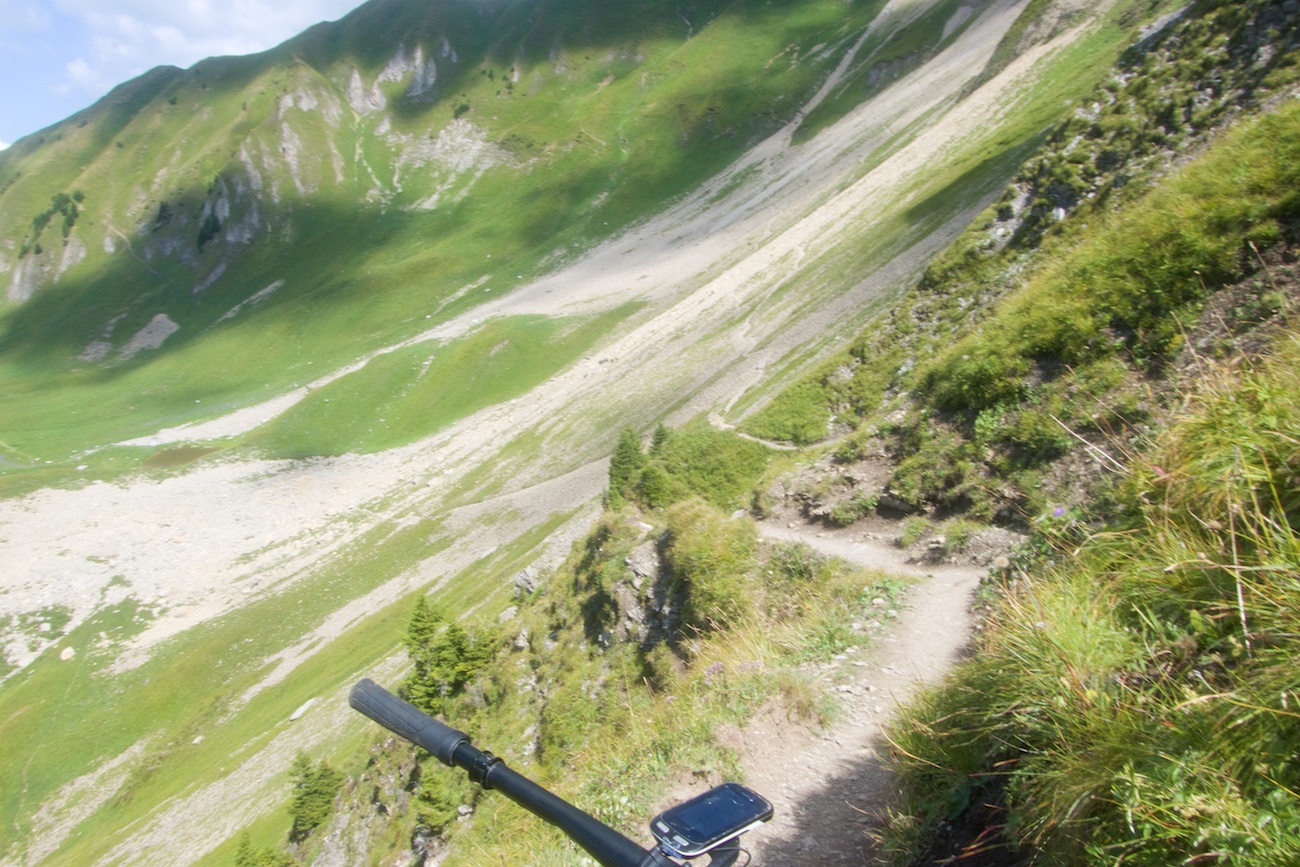 The route briefly flattens out on a plain covered in avalanche debris. I was glad to get down. Looking back up at the col: 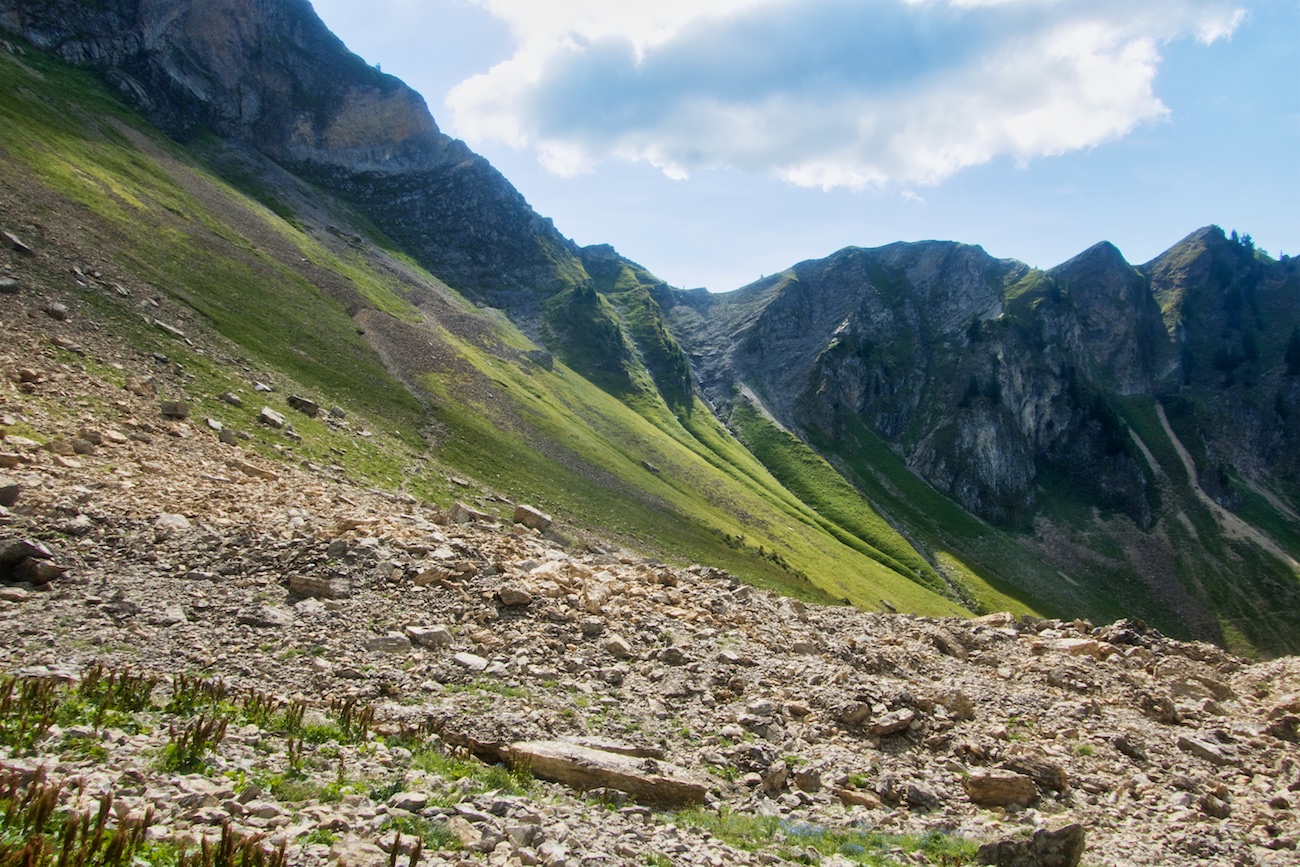 There is another very technical stretch of hiking down towards Col de Cenise. Not dangerous, but completely unrideable. But eventually I made it down onto the plateau. 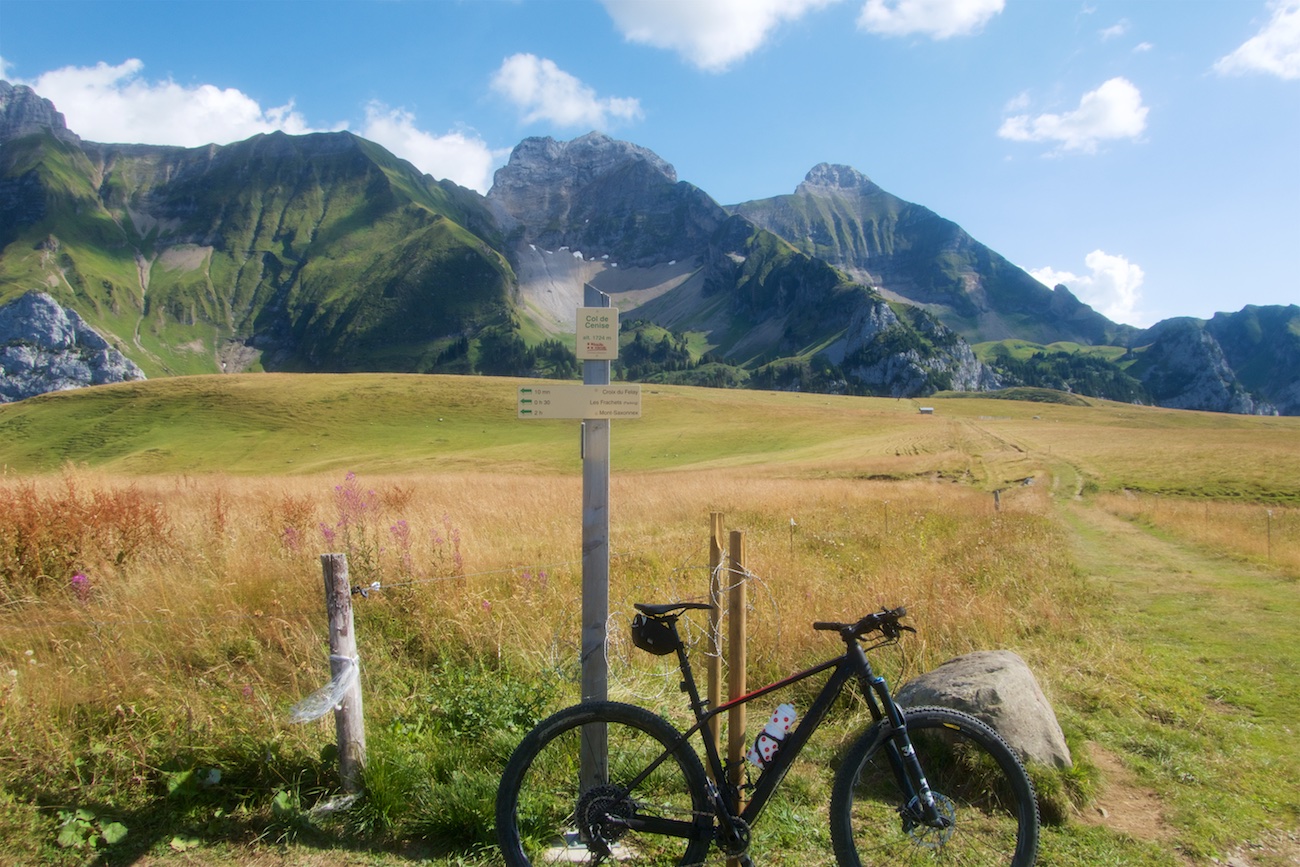 Col de Cenise is a fantastic climb on both sides. Completely rideable but gravel on the top stretches of both sides. Details of east side here, or a loop that climbs the west side and includes Plateau d’Andey here.

I would just descend the west side of Col de Cenise directly to the start. See the above links for details of this climb but note, there are some fabulous hairpins on this road: 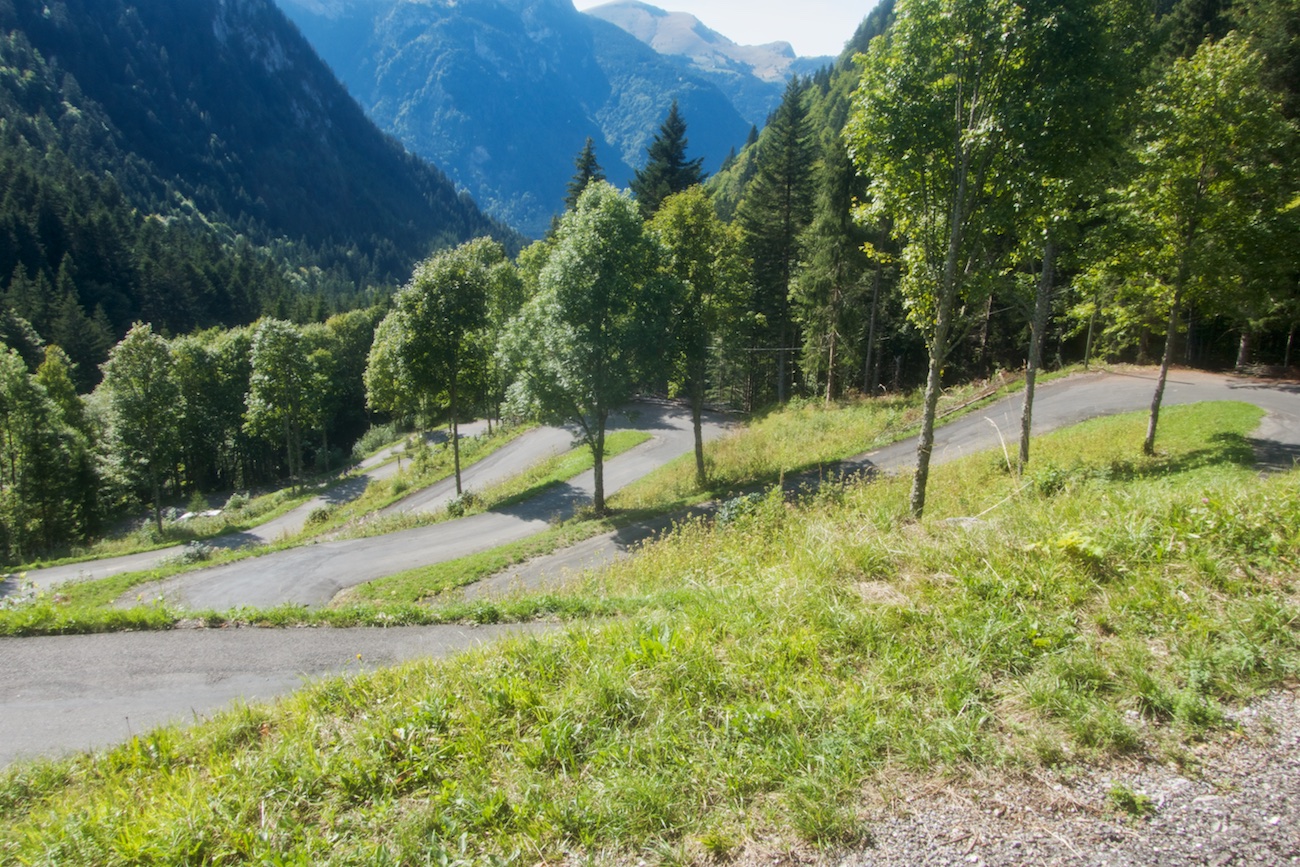 This loop is only 29 kilometres. But it’s one of the toughest 29 kilometre loops I’ve ever done. But in scenic, car-free mountains. Worth the effort.