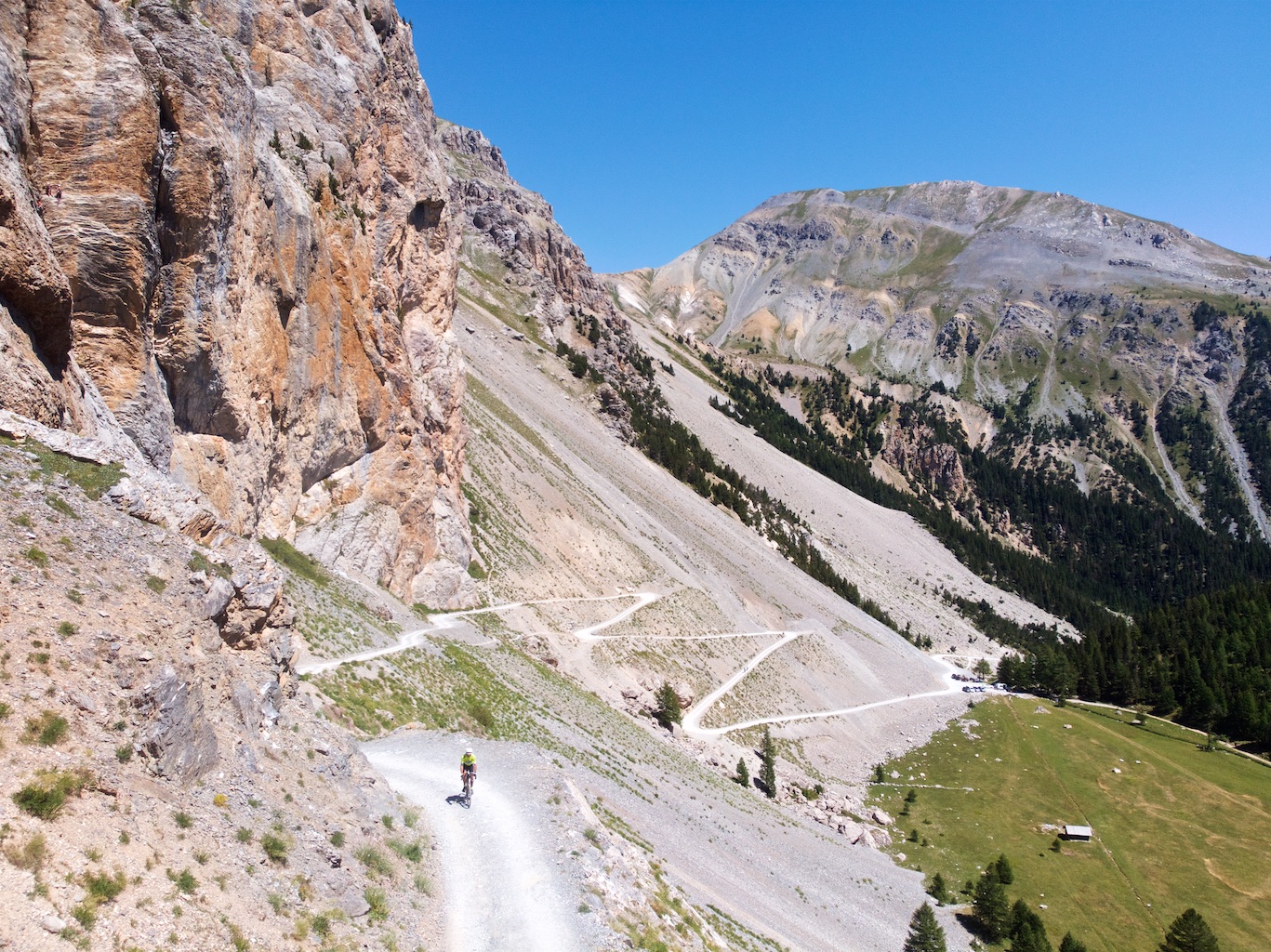 The Hautes-Alpes department has an official signed route for a loop for Col d’Izoard that requires one to cycle down low between the starts of each side: Guillestre to Briançon. But I wanted to try a loop that included another big Col.

At 2477 metres, Col des Ayes is higher than its far more famous little brother, Both sides are gravel until roughly 2200 metres, then it’s a hike to the summit.

I started on the edge of Briançon. It’s 17 kilometres up to Col des Ayes. It becomes gravel after 4 kms on a nice forest road. Lower down, it’s a dusty gravel road, surprisingly it is paved again on either side of the one village, Chalets des Ayes (1724 metres) before becoming rough gravel again.. 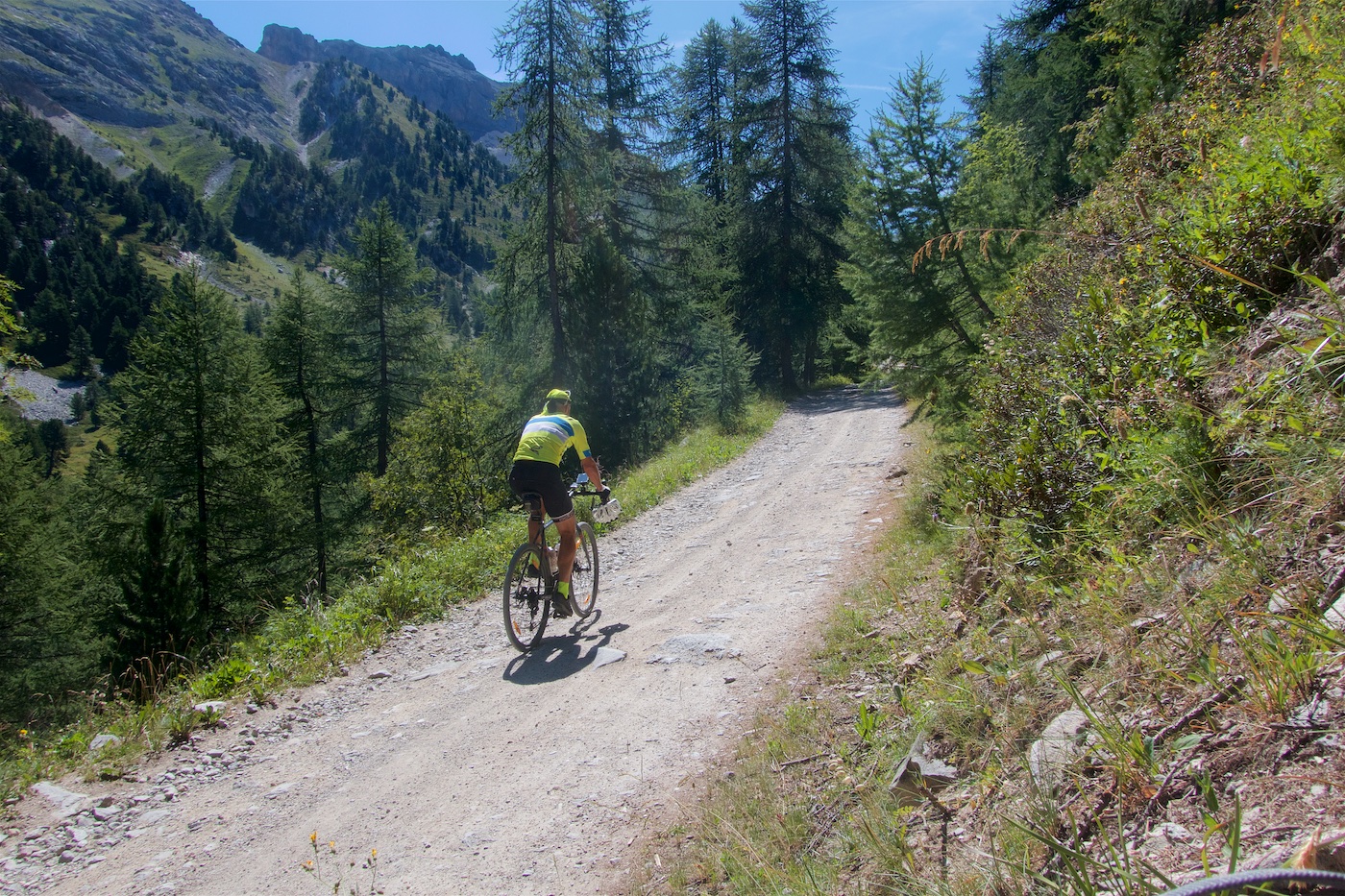 The road ends roughly 2 kilometres from the summit. From there it’s a well used, non-technical hiking trail. It soon becomes very steep – see profile in the map. 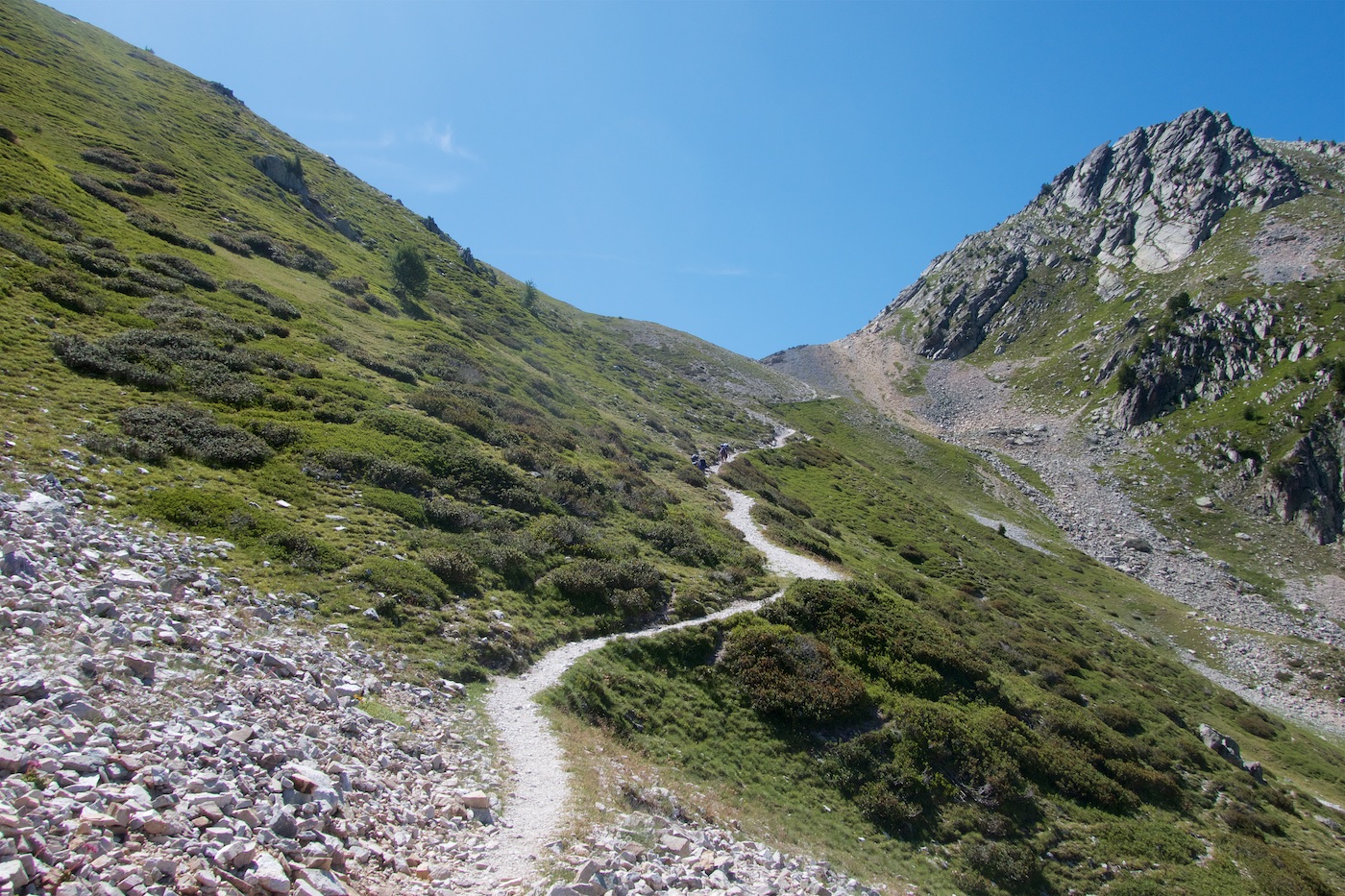 As I approached the summit, I felt great. Who else would ever bring a bike here? At the summit were five mountain bikers cheerfully enjoying lunch. 🙂 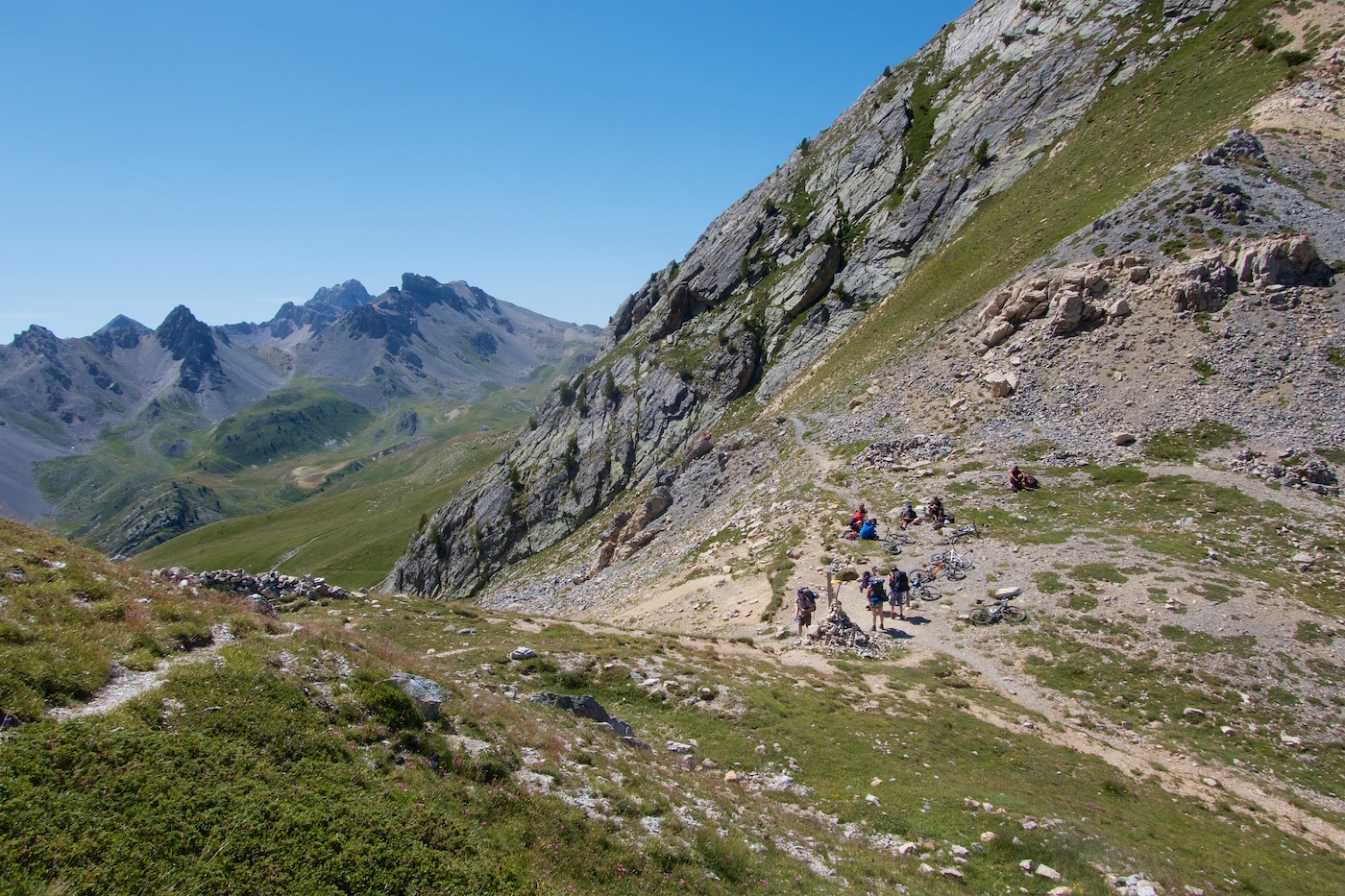 Descending the south side, it’s 2 kilometres of hiking trail until the gravel road. It’s steep, but good mountain bikers could ride large parts of it. 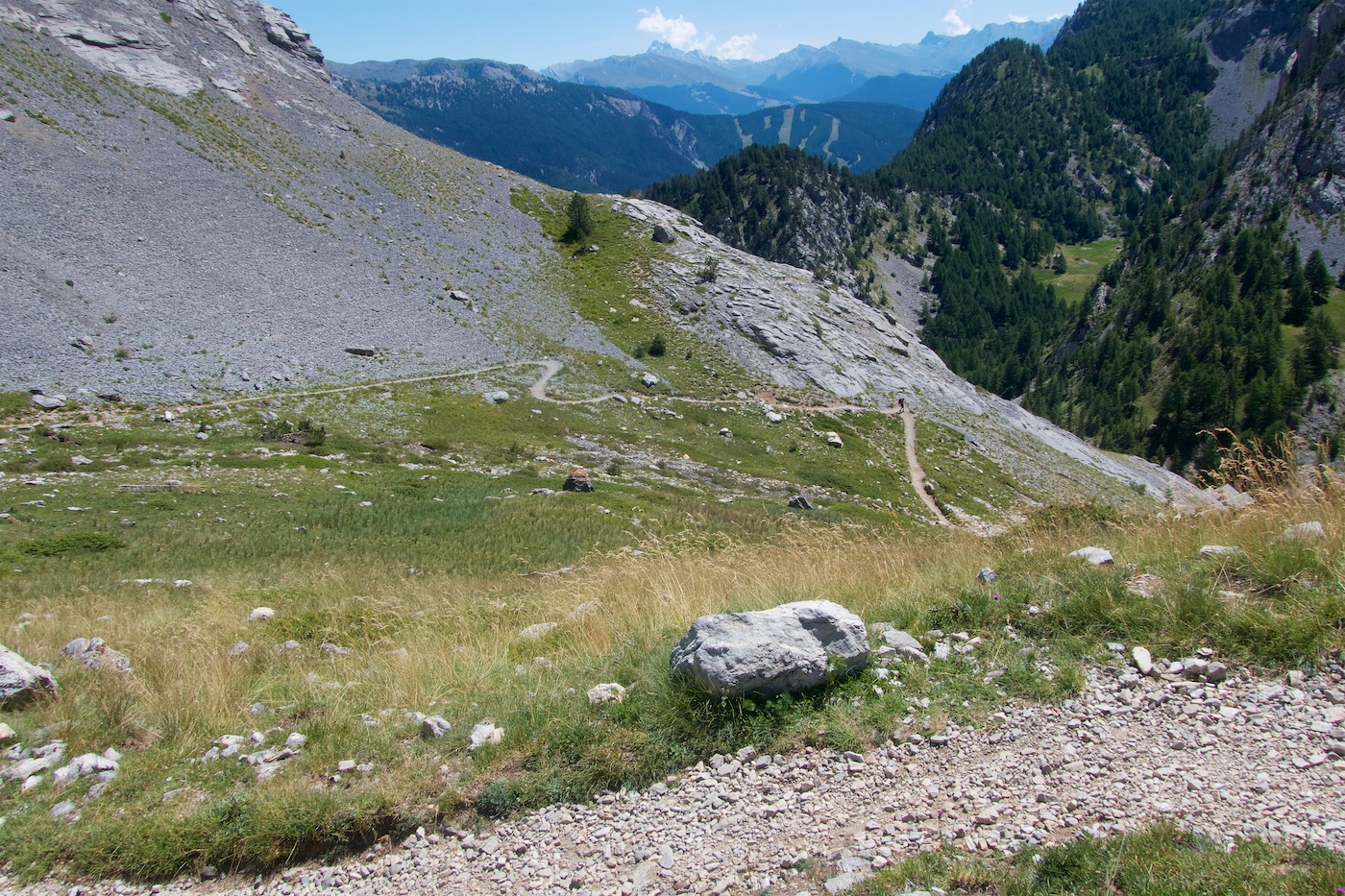 The beginning of the gravel road down is FANTASTIC. I would descend this: 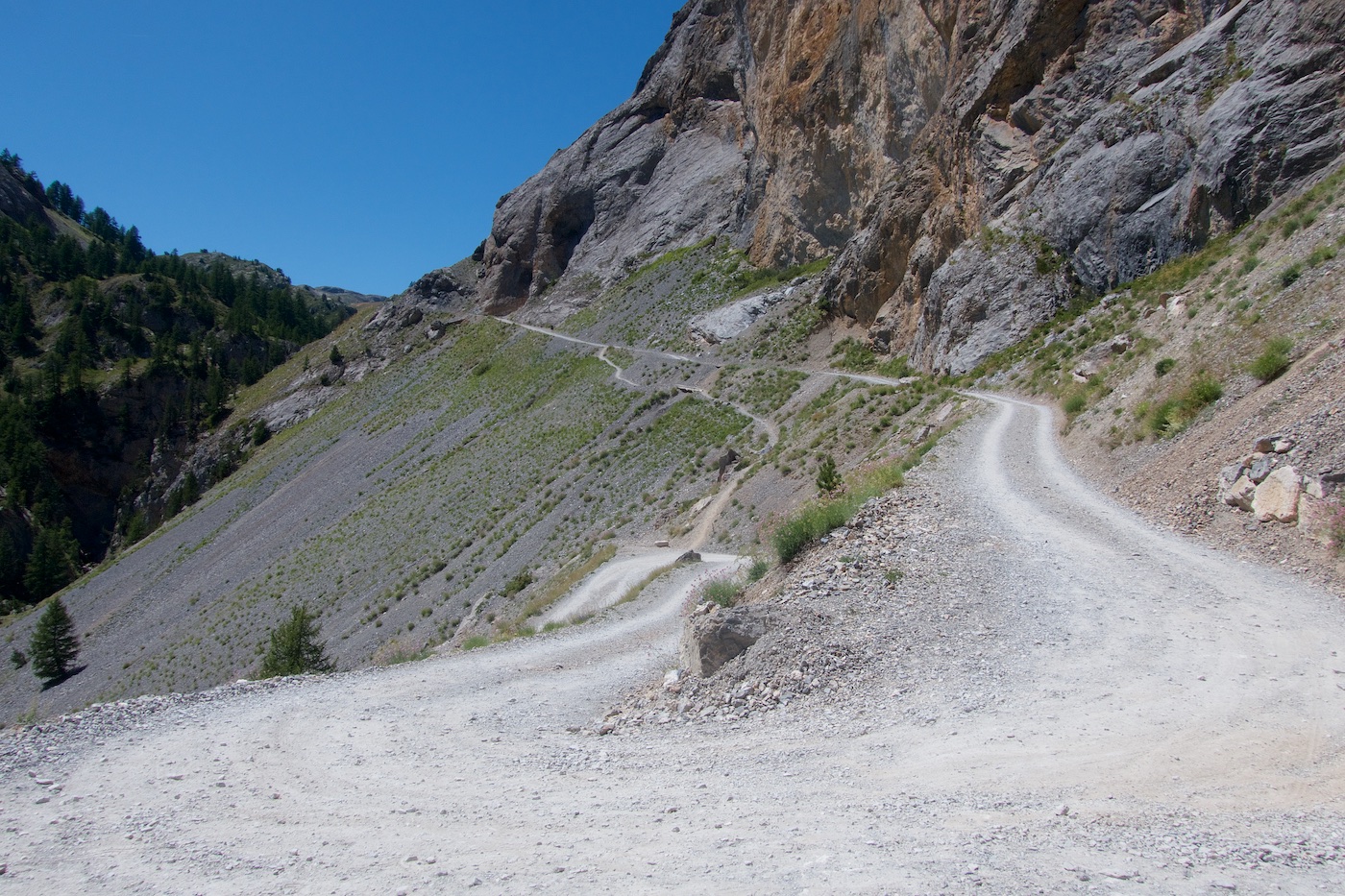 It’s only 6 kilometres or so from Col des Ayes to the main Col d’Izoard road. I would join it on the south side at 1800 metres, 8 kilometres below Col d’Izoard (2360 metres). This meant I would climb through the legendary Casse Deserte. Woohoo!

Above, I’ve included profiles for both sides of Izoard.

Cycling kilometre signs with some history: 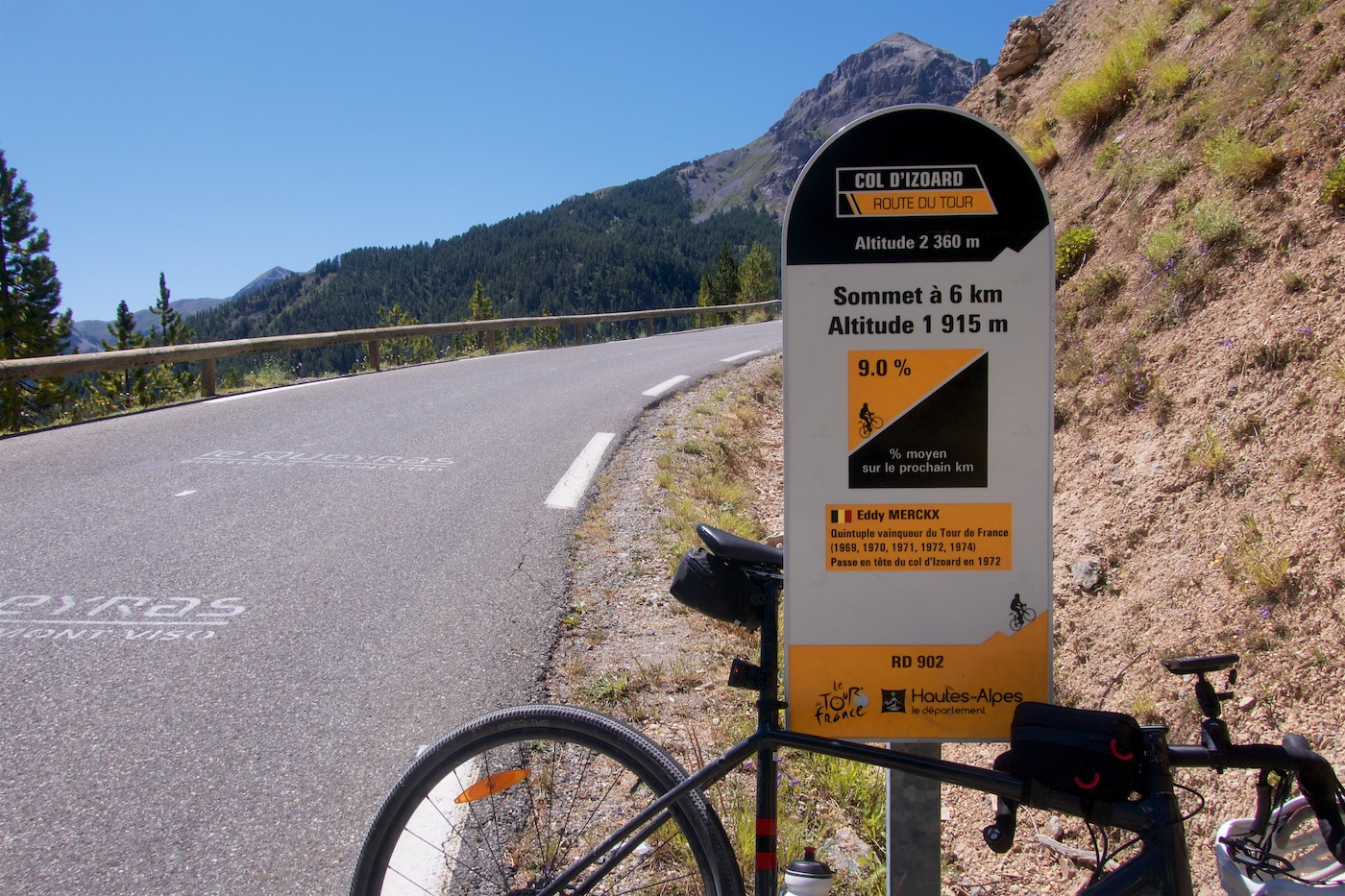 3 kilometres before the summit is Col de la Platrière (2220 metres), the entrance to the distinctive landscape of the Casse Deserte: 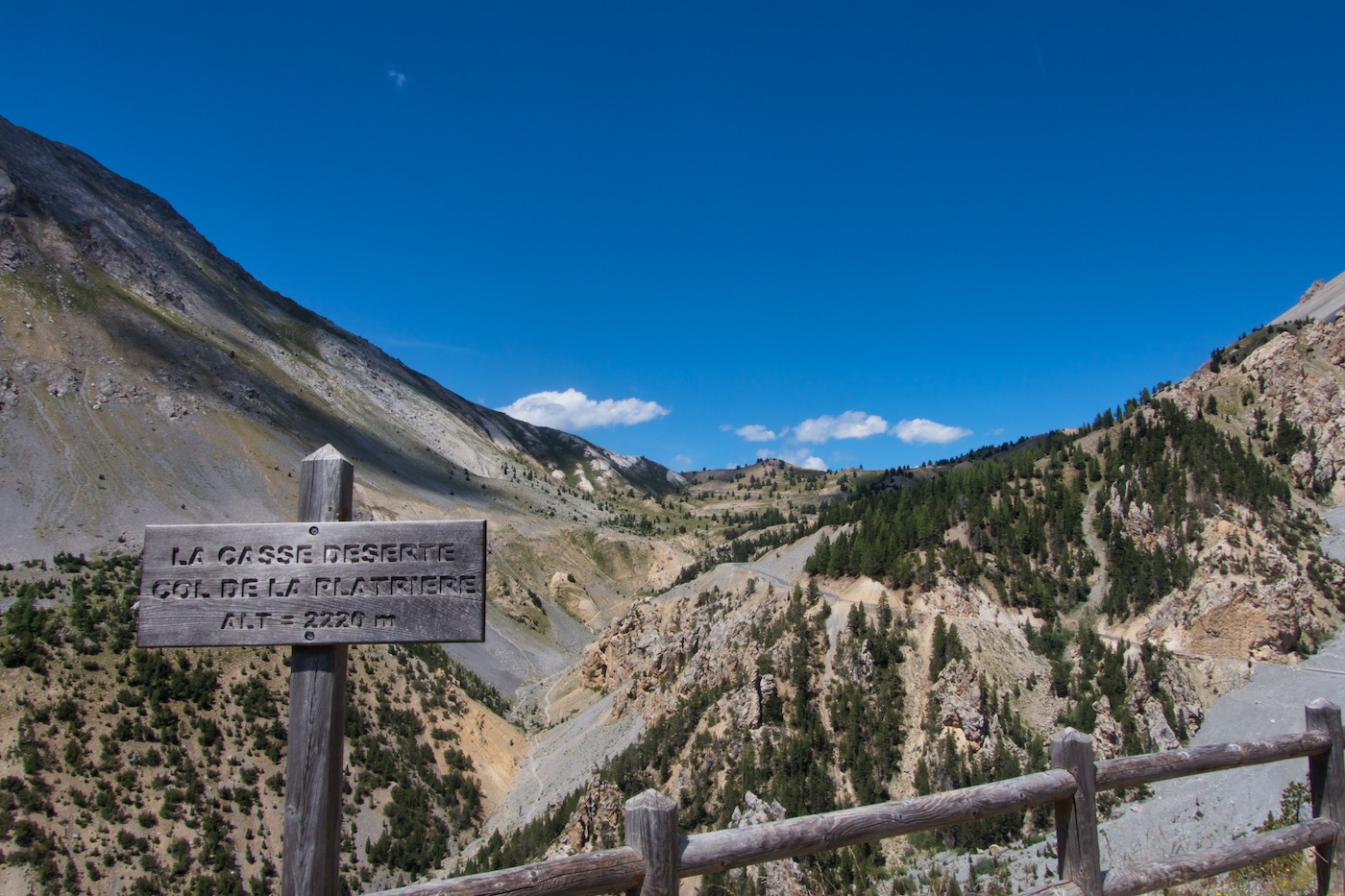 A kilometre beyond is the Coppi/Bobet monument: 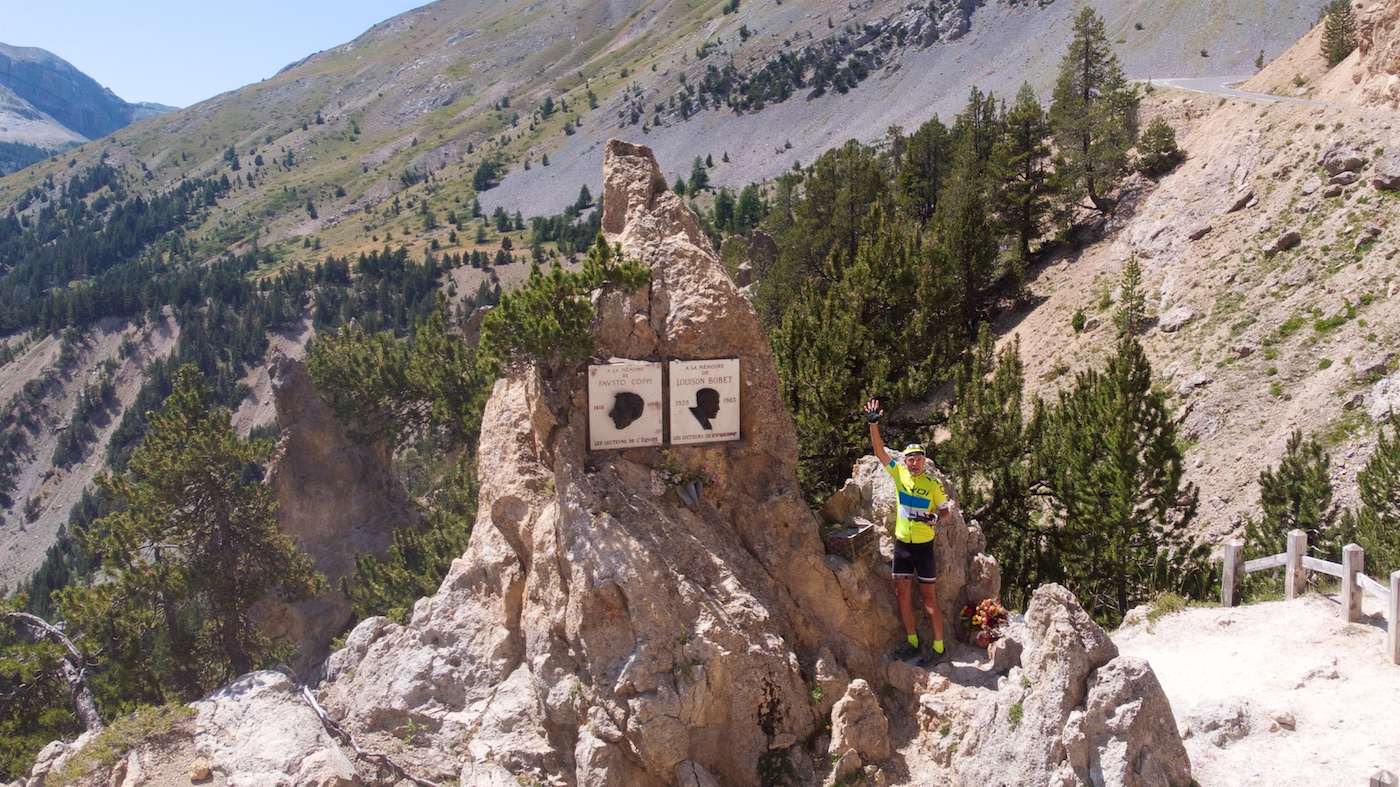 Here’s a scrollable 360 degree photo from above the monument:

Great hairpins near the summit: 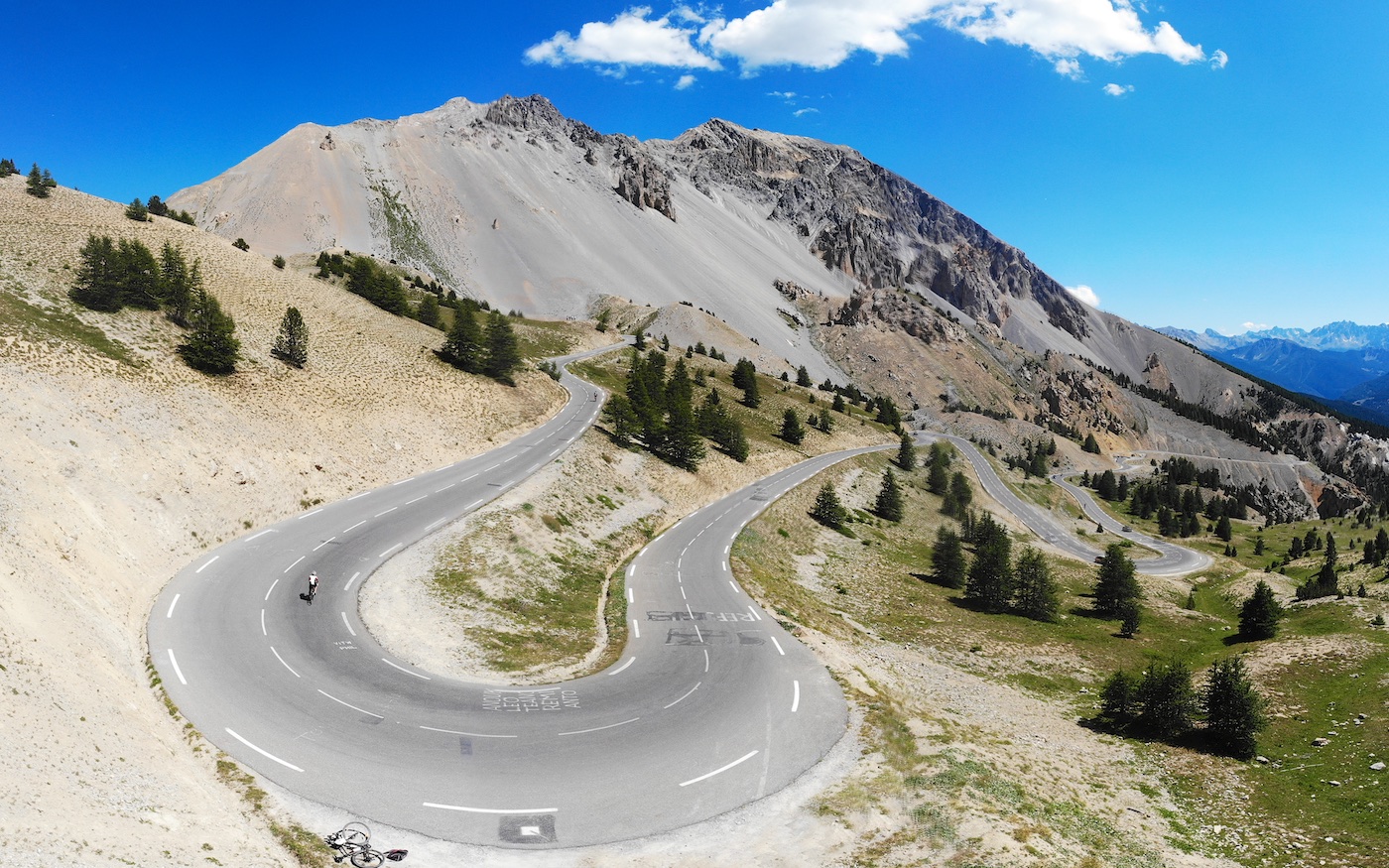 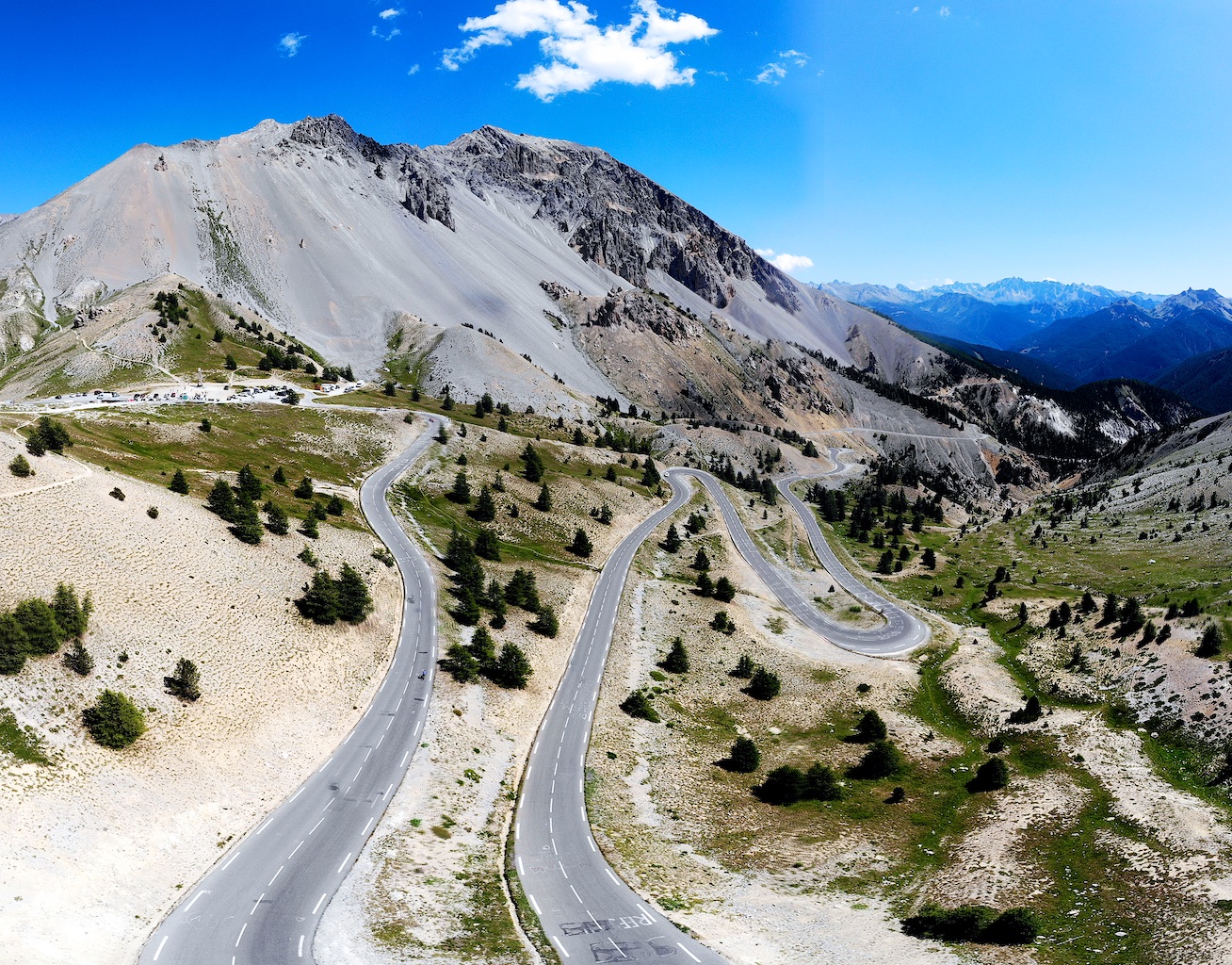 Here’s a scrollable 360 degree photo from just below the summit: 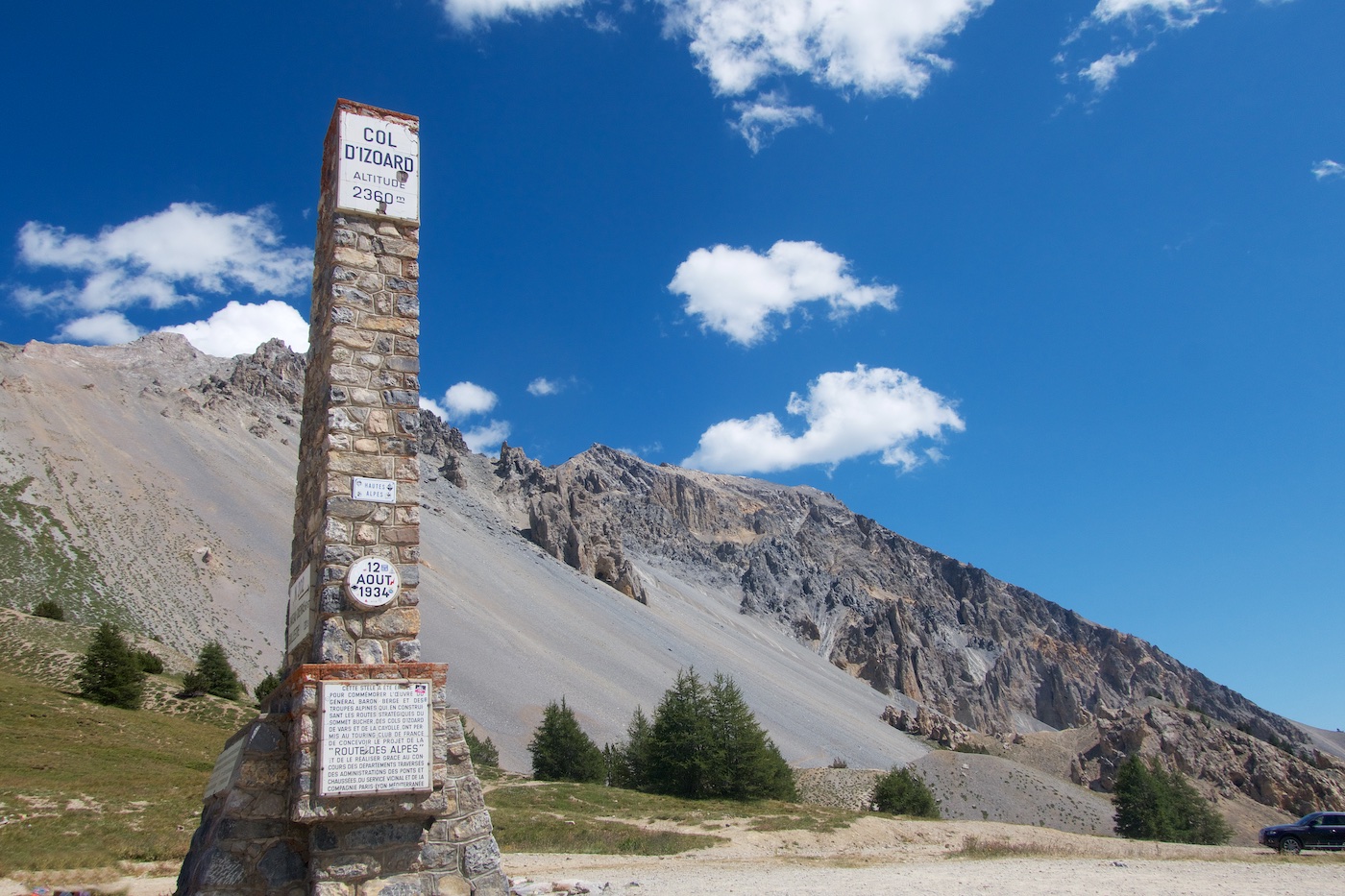 Top of the north side descent: 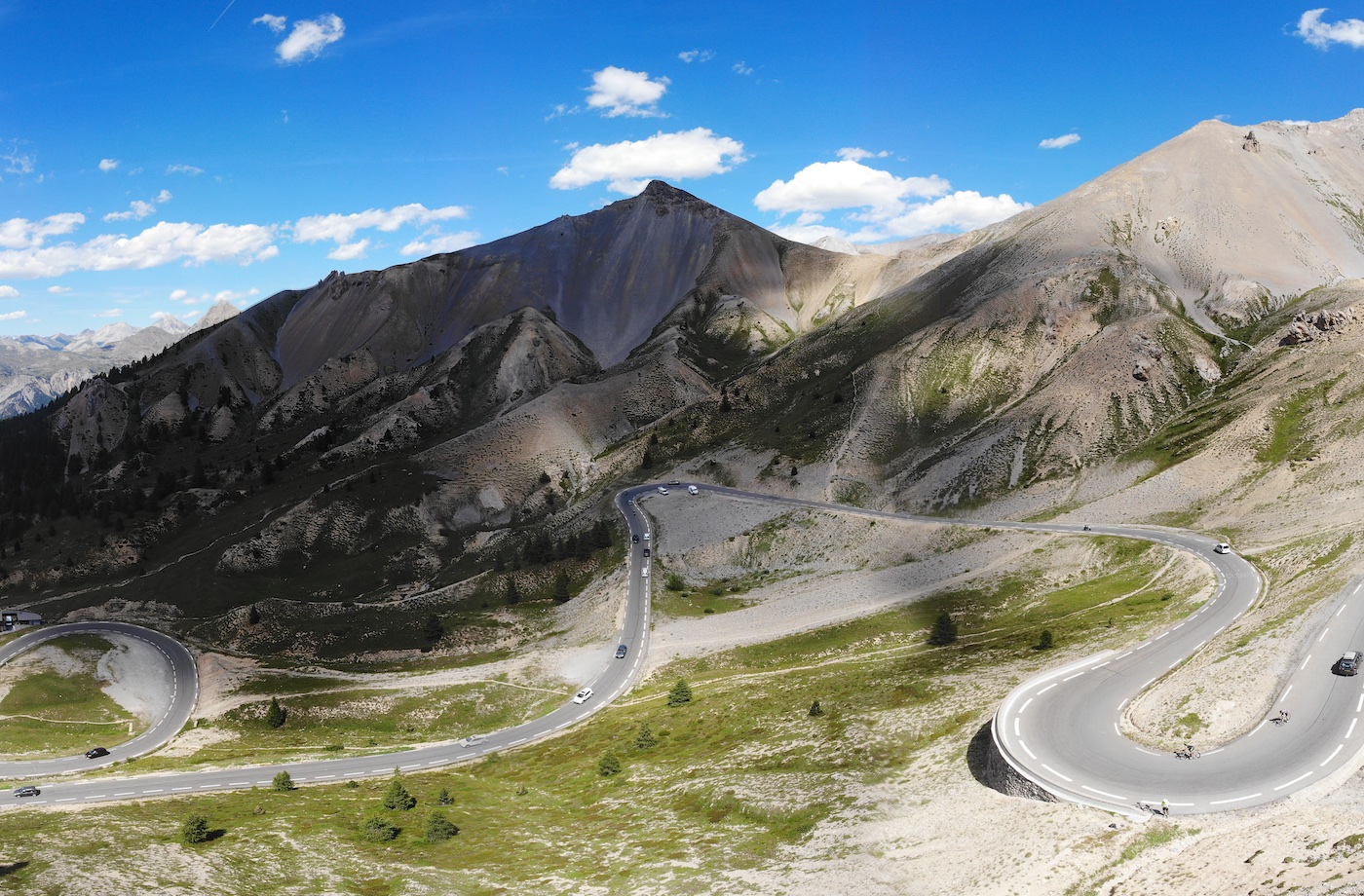 A few years ago, I rode both sides of Izoard on one of the many Hautes-Alpes bike-only days. I remember commenting on the wonderful silence. Today? Motorcycles everywhere spoiling the quiet. Oh well.

It’s a 20 kilometre descent down to Briançon on a good surface. I was tired so I thoroughly enjoyed not needing to pedal much. 🙂

This is a great loop, but be warned Col des Ayes is high and difficult and will require some hiking. I had a gravel bike, but might have preferred a mountain bike.

3D video of the route: