Col du Jandri is the second highest road – paved or unpaved – in Europe (Pico del Veleta in Spain is the highest). It is a service road for the various ski lifts and cable cars of Les Deux Alpes ski station.

I started just below Les Deux Alpes. However, you could add 11 kilometres and another 700+ metres of ascent by starting down the main road in Clapiers (the same valley as Bourg d’Oisans).

From Les Deux Alpes the paved road soon ends, becoming a decent quality gravel road for the entire route. Although signed as closed to motor traffic, there was the very occasional car/truck, mainly service vehicles.

This was my 4th time reaching 3000+ metres by bike. The best of the four is probably Colle del Sommeiller because of it’s beauty and given the entire route is ride-able. But Mont Chaberton is a vertiginous adventure, and Col du Caron is very fun as well.

The first few kilometres hairpin up the side of ski slopes above town. Several ski lifts and cable cars were open, most providing lazy downhill mountain bikers a ride up … all the way to the summit. While generally they stayed on groomed VTT trails, I would be passed by the occasional descender all ride. 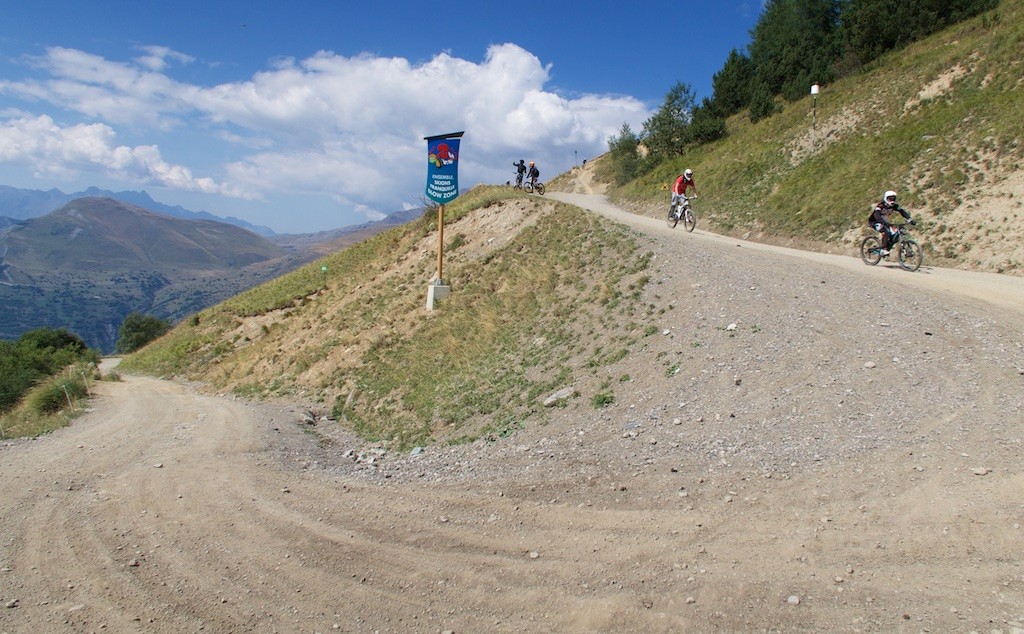 Next, above 2000 metres the road heads into the mountains. 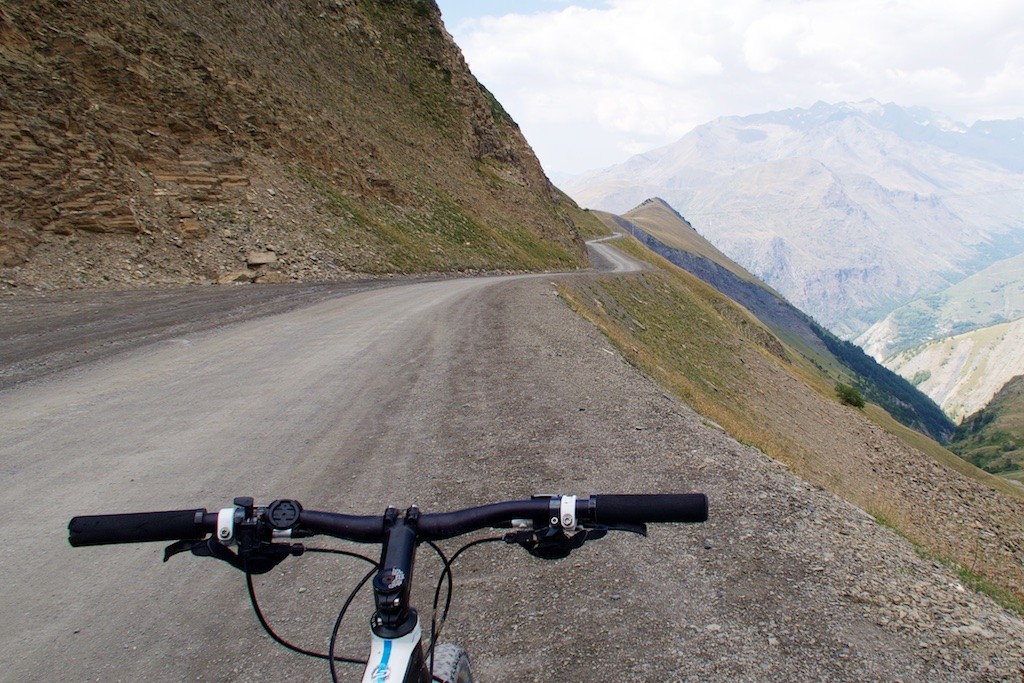 I passed a few lakes on the way up including these two dams/lakes at roughly 2300 metres. 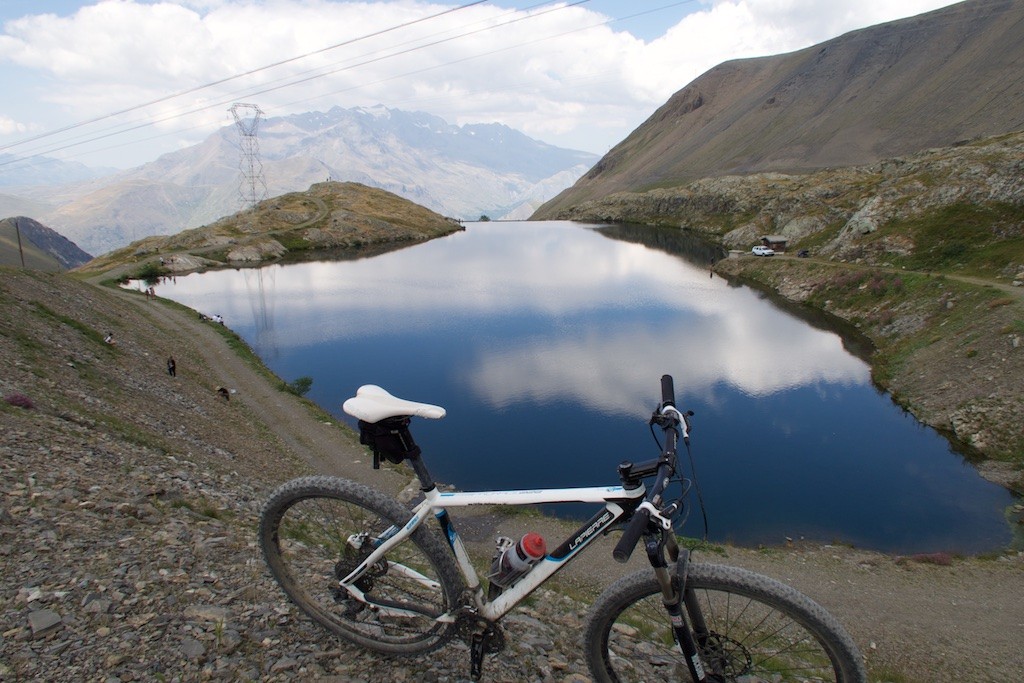 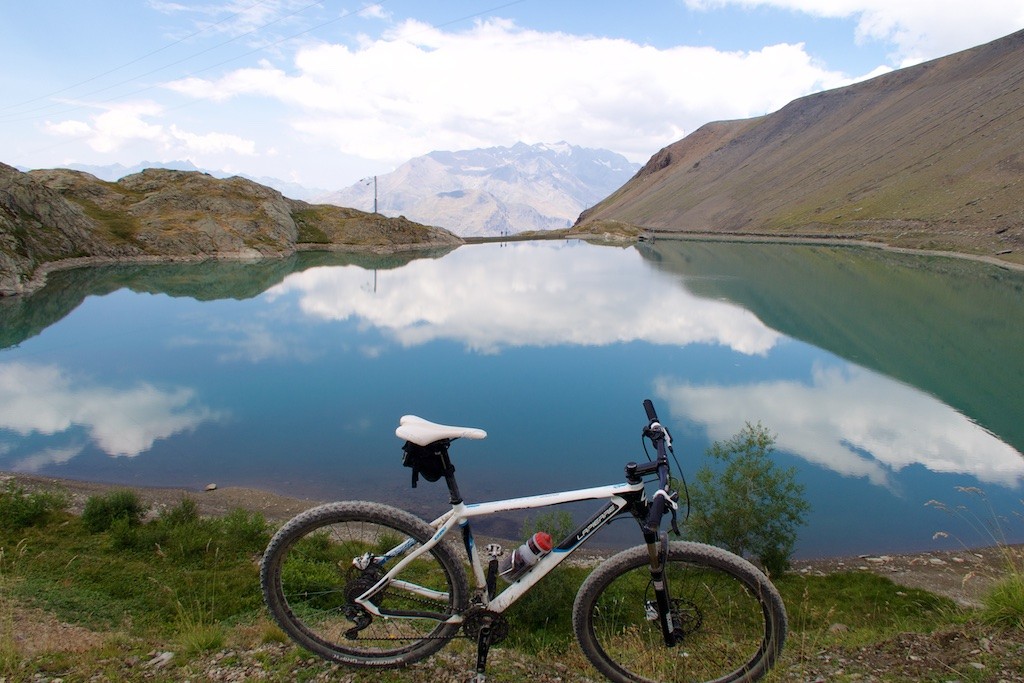 This is a steep climb, but a strong cyclist could likely cycle the entire way. Me? I pushed a few times, but never for too long – although the last steep stretch required some rest. 🙂 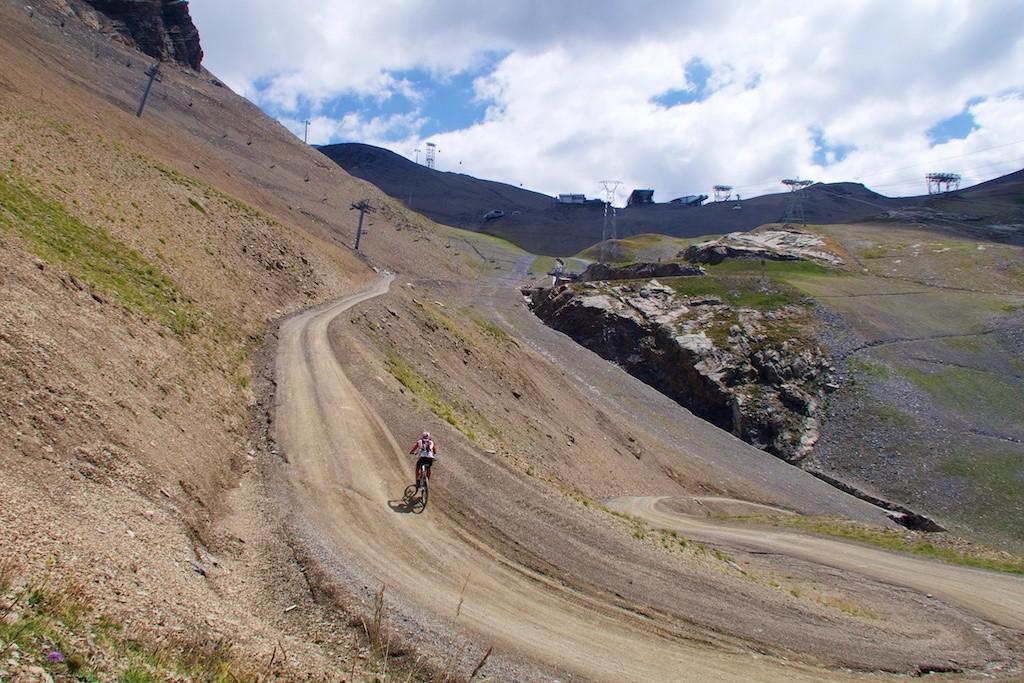 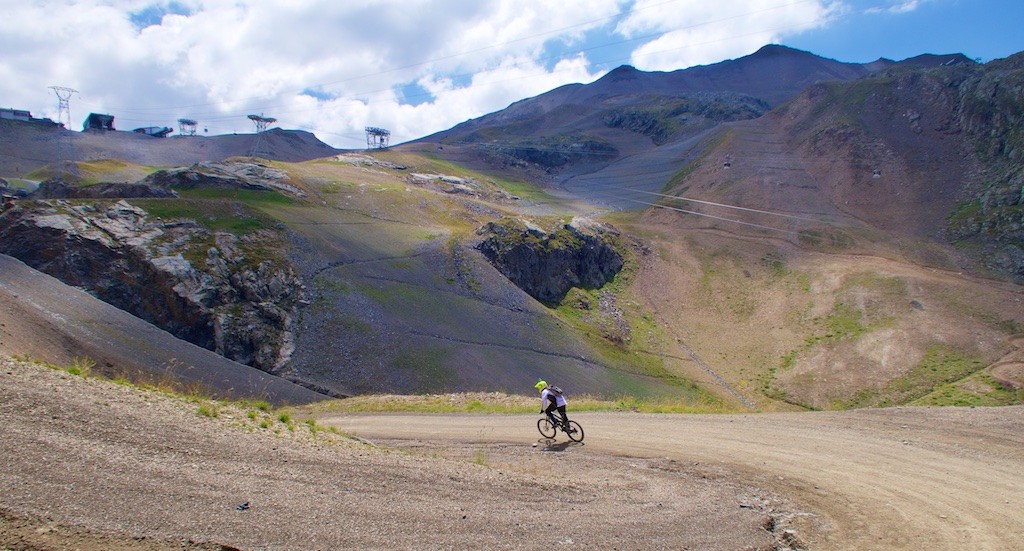 It was partly cloudy but clearly there are great views in every direction – even as the road was through a fairly stark, rocky environment. 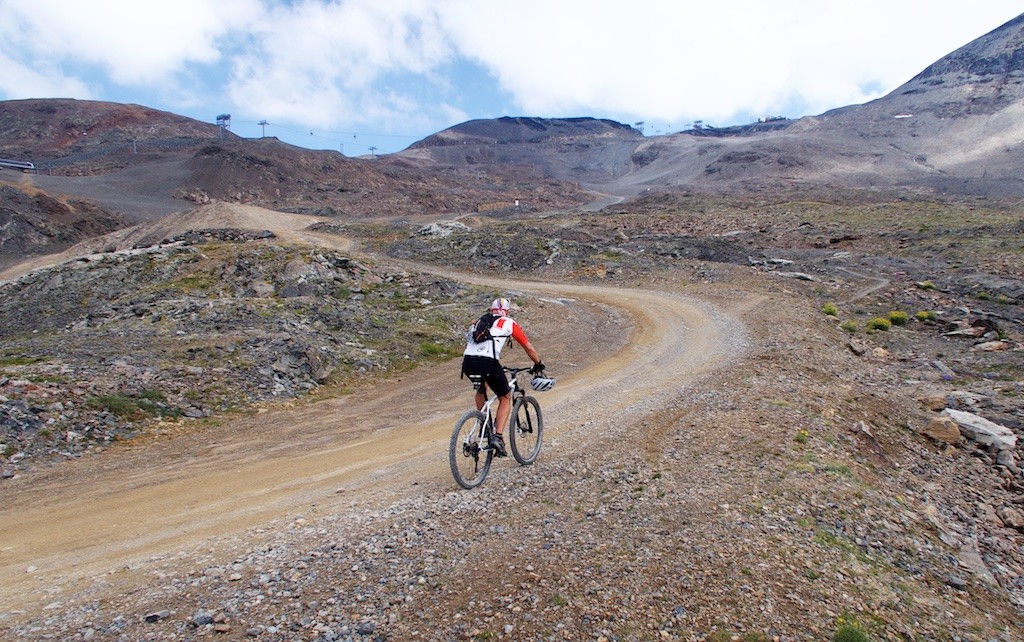 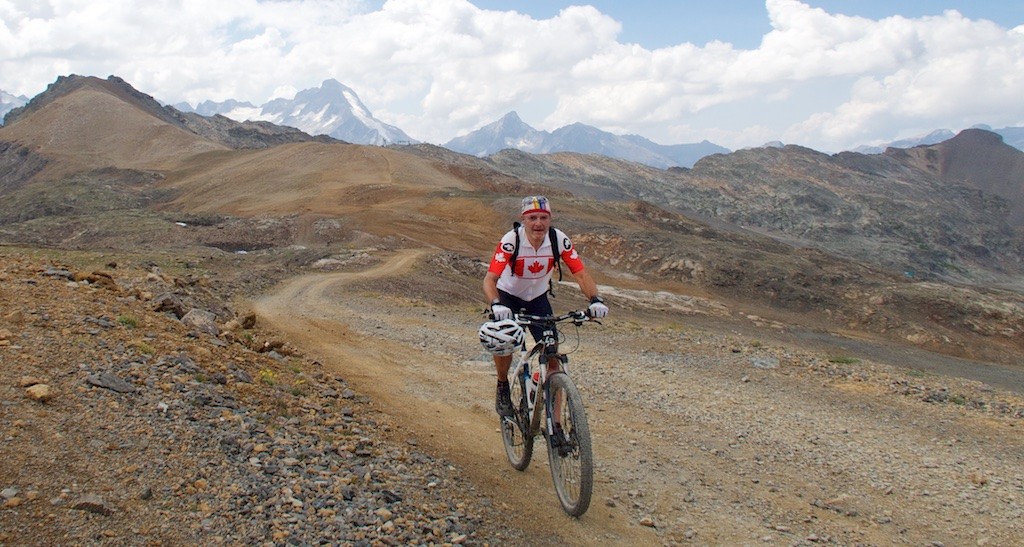 Eventually, I could see the summit. High in the distance: 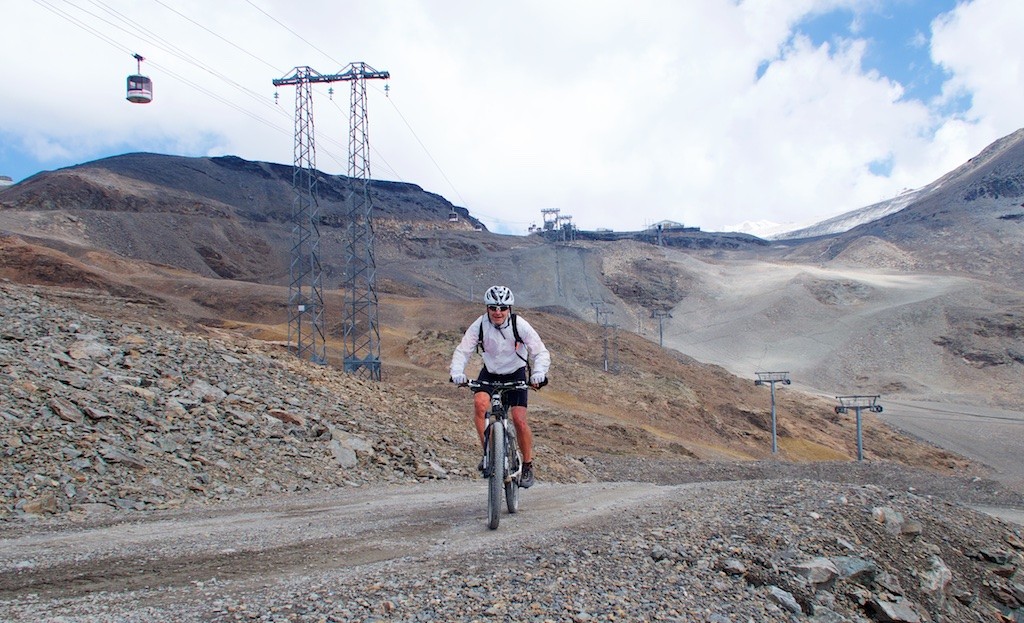 At the summit is the top of a cable car, and a restaurant. It is also the foot of the Glacier de Mont-de-Lans. There is a rope tow here and while it wasn’t running there is occasionally summer skiing here.

I couldn’t find a Col du Jandri sign at the summit, but the col is just before the road ends. I have seen conflicting altitudes but believe it is 3151 metres, and IGN marks the foot of the glacier as 3158 metres.

And best of all the bar “Le 3200” was open. I got a strange look from the bartender when I ordered a coffee and a beer. But I badly needed both. 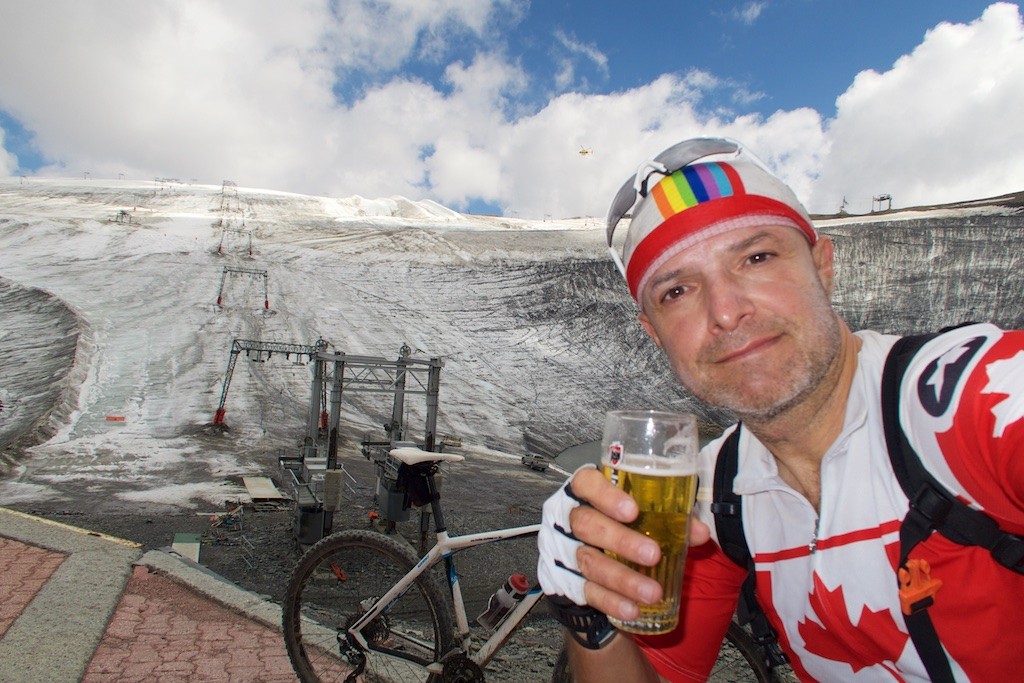 This is a huge climb that has been on my lost forever. And it didn’t disappoint.

My only regret was perhaps not waiting until early September so I could enjoy the road by myself – without the noise of the ski lifts and the distraction of the downhill bikers.