Col du Joly is one of my favourite road bike climbs starting from Beaufort – details here. Last time I climbed it I saw a mountain biker summit from the other, east side, which surprised me. I made my usual mental note. Finally, today, I gave this east side a try.

Starting in Les Contamines, after a couple of kms the route heads up and becomes unpaved. It’s extremely steep at times, winding up a ski slope.

The entire ride is dominated by the Mont Blanc Massif, as well as other mountains. It’s an amazing place. The higher the better for views. 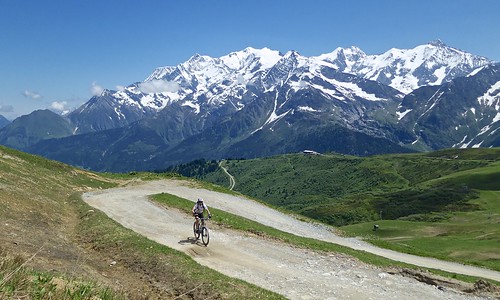 After reaching the Col, I noticed a road heading higher that looked ride-able – so off I went.

I passed a 1914 memorial to two people that died here:

The road was wet from melting snow, and steep …. and I had a (friendly) German tourist chasing me. But I beat him to the top (roughly 2250 metres) and took his photo: 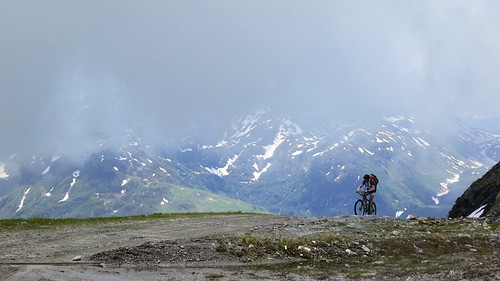 It seemed possible to go higher, but the “roads” were covered with snow. So instead I followed a mountain bike sign that I thought would head down.

Here I made a mistake. I should have descended the easy-to-see road from Col du Joly. My mountain bike route stayed high on a single track. Much of it had been eroded by avalanches, and many of the torrents/rivers were covered in snow and mud and were tricky to cross. But it was fun at times: 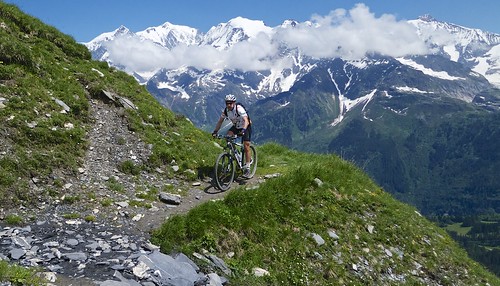 Then the mountain bike signs disappeared. I was enjoying myself, but couldn’t quite figure out how to get down. Finally I found a hiking trail and walked half way down until I finally found a road.

All in all, a truly stunning route, but again, I’ll take the more direct way down.

Col du Joly is one of my favourite road bike climbs starting from Beaufort. But this mountain bike route climbs the from the other, east side. Fantastic trails in the shadows of Europe's highest mountain.