Colle di Sampeyere is the 12th highest paved road in Italy (2284 metres). I have cycled it once before from Sampeyere – see here. But the goal today was to reach the Col via an old unpaved military road. This great route passes (at least) 7 mountain passes and the Rifugio di Valmala – all labeled on the map.

This short, one minute video, shows how the route climbs along the top of a mountain ridge:

The Strada dei Cannoni was originally built in 1744 by the Kingdom of Sardinia while fighting the French and Spanish. It was significantly improved and repaired in the 1930’s.

Unfortunately, it was overcast and I spent much of the ride in the clouds blocking the spectacular views. 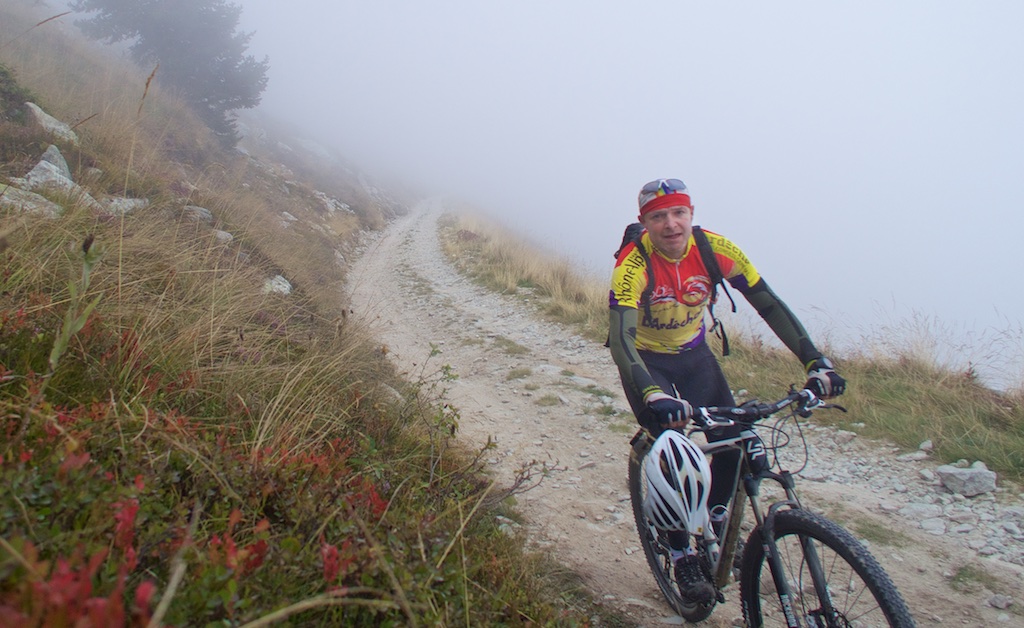 My route started near Melle climbing a quiet paved road mainly used to reach the Santuario di Valmala (1380m). Just beyond, the road reaches Passo Pian Pietro (1354m). I saw a couple of groups of road cyclists and they all descended via Pian Pietro.

But at the Pian Pietro is a little road that continues higher. It is paved until Col della Ciabra (1723m). Narrow but fabulous:

Note: The route also passes Colle di Valmala (1541m). It is just above the paved road, accessible via a bumpy trail (see map).

I am a huge fan of high altitude, unpaved old military road. Always great riding and seldom any traffic. See here for more of these rides.

Exactly at Colle della Ciabra (1723m) the paved road ends. From here until Colle di Sampeyre it is a rocky/gravel road. Usually good quality, but occasionally very rough (particularly just after Colle Birrone): A Mountain Bike was the correct choice. From Ciabra, it’s flattish for several kilometres and a lot of fun to ride. 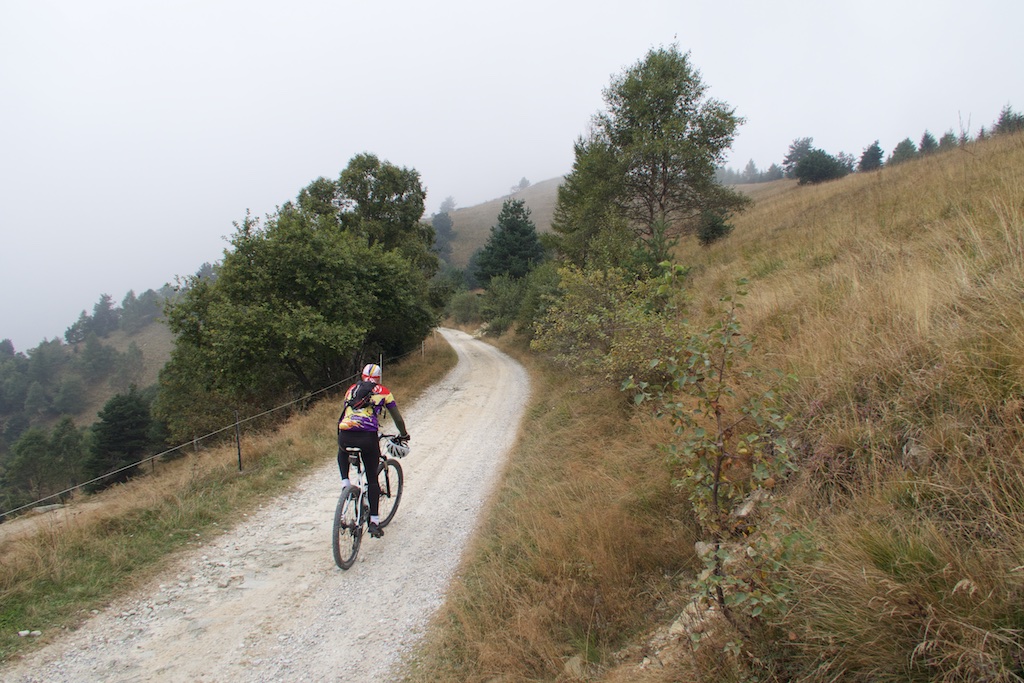 At Colle Birrone, the road turns up again. It was signed as closed for the day. I decided this only meant for cars.

The road actually goes higher than Colle di Sampeyre to perhaps 2335 metres before descending. Very briefly I had some sun and actually saw my shadow. But the fog again quickly closed in.

I reached Colle di Sampeyre and despite the fog, I decided to keep exploring the gravel road that continues along the mountain ridge. I was able to go 7 kilometres further. Sometimes up, sometimes down, passing Colle Terziere (2280m). Finally at Colle della Bicocca (2285m) I decided to turn around. It’s a hiking trail-head (parking lot).

Finally, I returned to Colle di Sampeyre and descended the paved route to the village of Sampeyre, and then descended the main road to the start.

This is a fabulous route! So quiet and scenic. I must definitely return and try again on a sunny day.