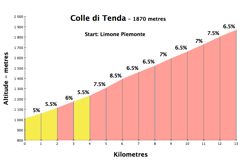 My favourite type of cycling is on high un-paved mountain roads. No traffic, usually very remote. Heaven. And many of the best are old military roads along the French/Italian alpine border. See here for several more of these rides on much higher roads.

This ride climbed both sides of Col de Tende, as well as exploring the military ridge roads on either side. I started on the Italian side near Limone Piemonte. To warm up there are 8 very nice numbered hairpins on the main road. On the map below, note where I turned off onto a quieter road towards the ski station – as often people take a later turn-off.

Motorised traffic must take the car-only tunnel to cross between Italy and France. I would ride hours without seeing a car.

The climb then snakes up ski slopes – very scenic. This Italian side is paved, if often bumpy, until the restaurant on the border. But note, like many strategic points along the Italian/French alpine border, the 1947 treaty following World War II placed the Col itself well inside French territory. The final 600 metres or so to the Col itself is partly unpaved, very rough, and in France. 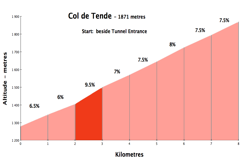 Next I descended the French side. It’s roughly 8 kilometres down to the tunnel exit and the main road. The top 4 kilometres are unpaved and quite rough. Although I did see a road biker descending gingerly.

I descended to just above the main road and tunnel entrance. I ran into construction and a traffic jam (the 19th century tunnel is currently one-way at a time). One could descend over the main road and find a few more hairpins on the old road. But I just turned around.

The climb itself is a tiny road, and closed to motorised traffic. It’s tough to photograph while on the road, but later in the day I would get views from both sides by riding ridge roads connect to the col.

It’s generally, a steady, not-to-steep, grade but less than half way up are some ramps well above 10%.

Just above the Col, towering above the climb is the Fort Centrale, one of several in the area most built in the 1880s by the Piemontese.

As I reached the col for the 2nd time. I headed west, in search of another fort. Just a few kilometres along a gravel road is Fort de la Marguerie – 1841 metres. From here I had a better view of the climb, especially the lower hairpins: 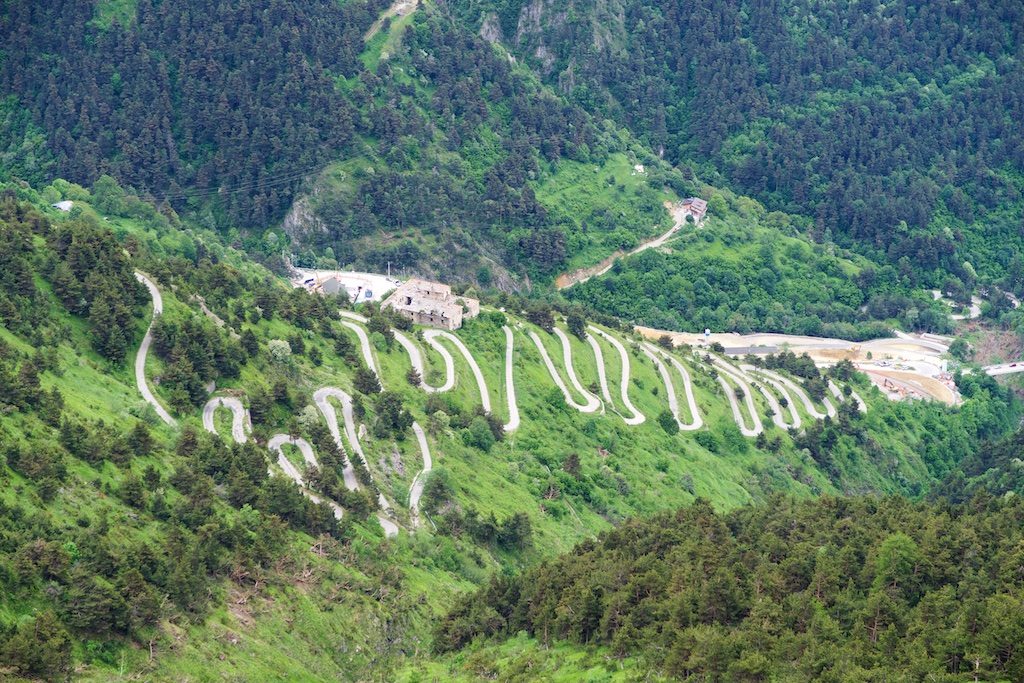 The road continues into the mountains – remote, beautiful. Mainly flat at first, it winds around the edge of a mountain, then it climbs past some huge old ruins of barracks eventually reaching its high point at a mountain pass called Baisse de Peïrefique at 2040 metres. 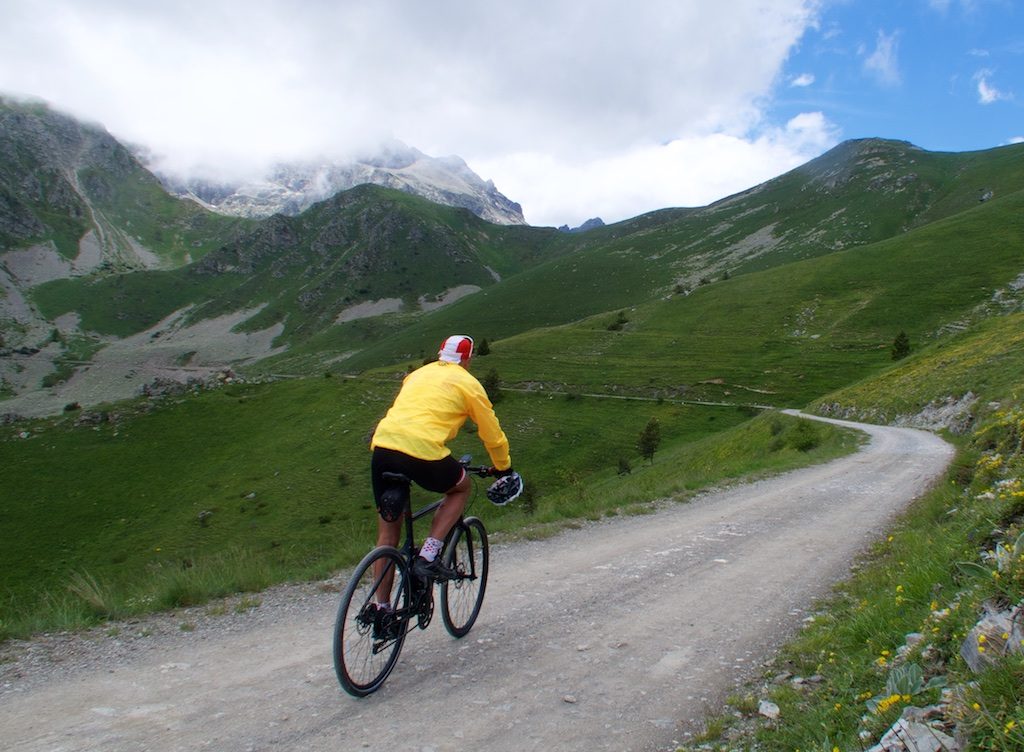 As a devoted col hunter, I also went trail riding to track down another col: Baisse de Barsenzane (2075m):

The wind was a good 40 km/h up high. I would spend almost this entire ride watching the weather, realising that storms were possible. Dark skies made me turn back to Col de Tende. There, I took the road up to Fort Centrale, and decided to push my luck and explore the ridge road in the other direction.

Without any effort the road on the far side of Fort Centrale traverses to two more cols (see map). Finally, I rode up to Fort Tabourde (1942 metres) in an attempt to get a better view of the hairpins. It’s a superb cliff road, and I saw Via del Sale (Salt road) mountain bike signs that would lead higher (a return visit!). But as I felt rain drops I got my full hairpins view down below. The photo at the top of the article was taken from here.

Finally, I descended back into Italy to the start. What an amazing place. Sorry for so many photo, but this felt like 4 separate rides, each leading to Col du Tende from a different direction. This is no-where near the highest Italy/France alpine military road that I’ve ridden. But it certainly has the most hairpins. 🙂