Details of the South side are here.

Cormet de Roselend at just under 2000 metres at the summit is a beautiful and challenging climb. The north side is particularly scenic with a huge alpine lake at 1,600 metres created by a large dam (see photo). It has appeared more than a half dozen times in the Tour de France, first in 1979, when the Dutchman Henk Lubberding crossed the summit in front. It last appeared in 2005 and will be a part of the 2007 tour.

Roselend is part of the Route des Grandes Alpes, so it gets a fair amount of traffic in the summer.

The classic North route reaches the Dam via the Col de Méraillet. A more challenging and quieter route to this point is via the amazing Col de Pré – also starting in Beaufort. There is a huge billboard/map in the center of Beaufort describing several great climbs.  Excellent and detailed route cards are
available from the tourist office.

43.3 kms Wednesday – This was the 1st big climb in this year’s Tour de France.

Stunning scenery, and pretty steep. 2/3 of the way up is a dam that creates a lovely blue alpine lake. 1300 metres of climbing later brought me to almost 2000 metres and great views. HIGHLIGHT (LOWLIGHT?) I was passed by a female near the top – my goodness was she petit and strong. As the French say: Chapeau! 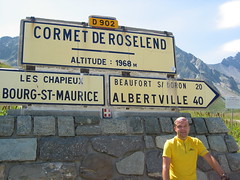