Trending
You are at:Home»Alps»Swiss Alps»Grosse Scheidegg (A few drone photos) 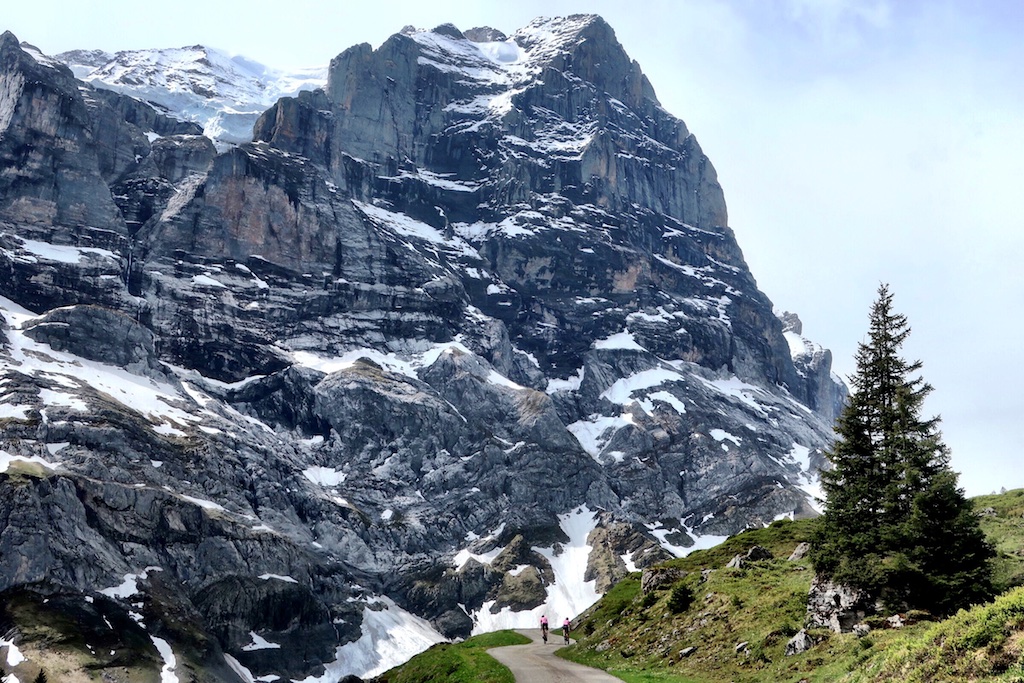 Grosse Scheidegg (1962 metres) is a mountain pass in central Switzerland linking Grindelwald and Meiringen. Located in the Berner Oberland, the climb is dominated by some of the highest mountains in Europe including the Wetterhorn directly above, and the renowned Eiger north face.

The top part of the road on both sides is “theoretically” closed to car traffic, but regular Post Buses do come flying up and down every now and then – as do some cars. I’ve written about Grosse Scheidegg quite a few times. I think it is one of the most beautiful high Alps climbs in Europe, both sides. Here I’ll just write briefly and show some photos, including a few with a drone.

The plan today was simple. Start in Meiringen, climb the east side. Then descend the west side as far down as my legs were willing to climb back up — then return to Meiringen.

From Meiringen, it’s a couple of kilometres to the turn off to Grosse Scheidegg (see map at bottom). Then, it’s five very steep kilometres on a narrow road winding up through a forest. Just off from the route is the Reichenbach Falls, where Sherlock Holmes was “thought” to have died during his last fight with the evil Moriarty. 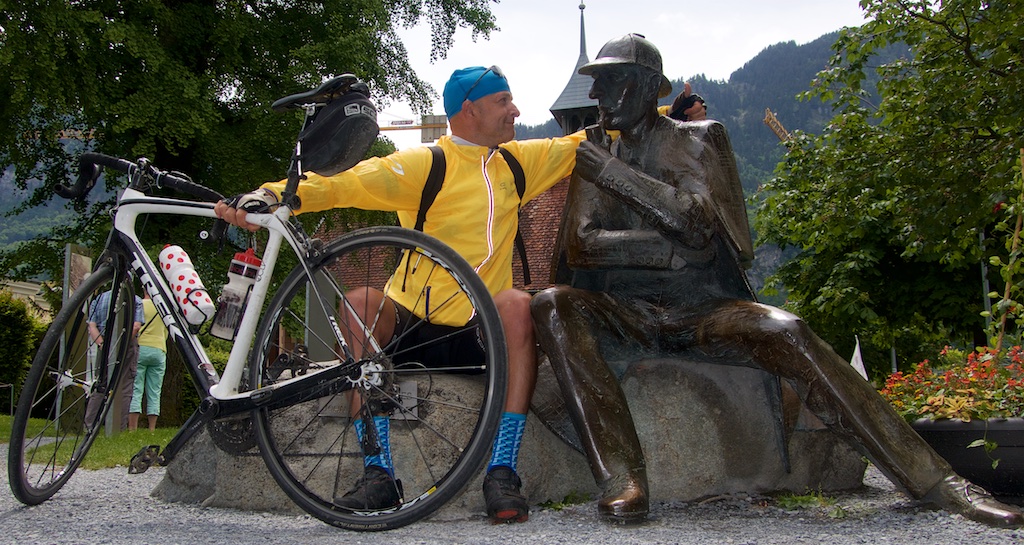 There is a Sherlock Holmes museum (and Statue) in Meiringen

Once you survive this, there is a flatter section with views of the wonders to come: 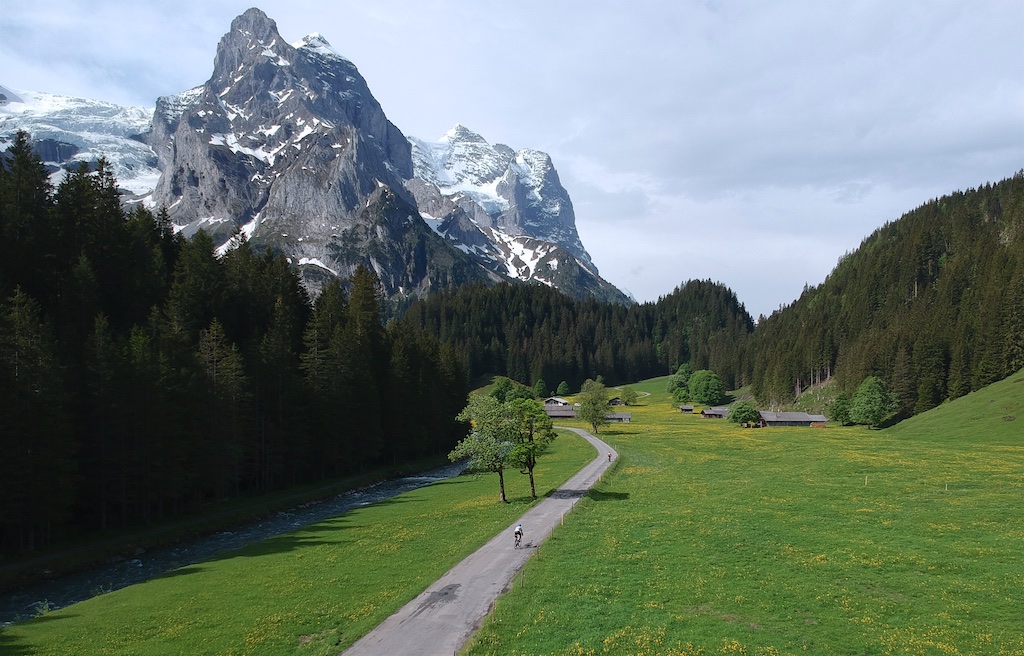 You’ll ride by a couple of hotels and restaurants if hungry, then things really get fun. There is a brief killer stretch of a few hundred metres (five fast guys said hi, and sailed past me here), then the view are just to die for. 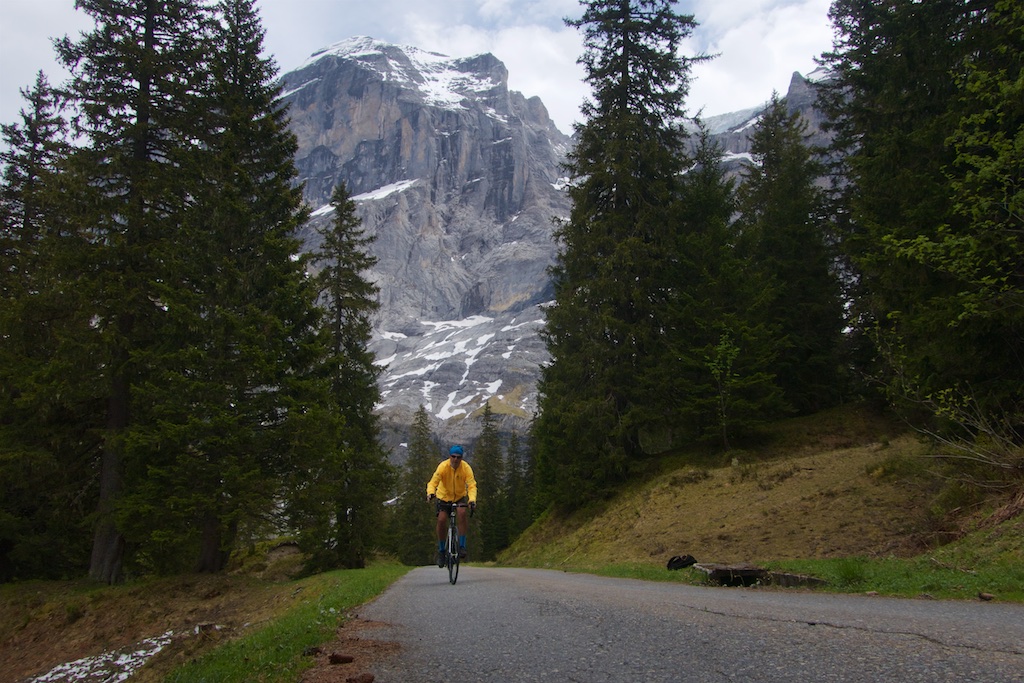 I had brought the drone but found it perhaps wasn’t suited for this environment. It was incredibly difficult to get the mountain (the Wetterhorn) and the road/cyclist in the same frame. 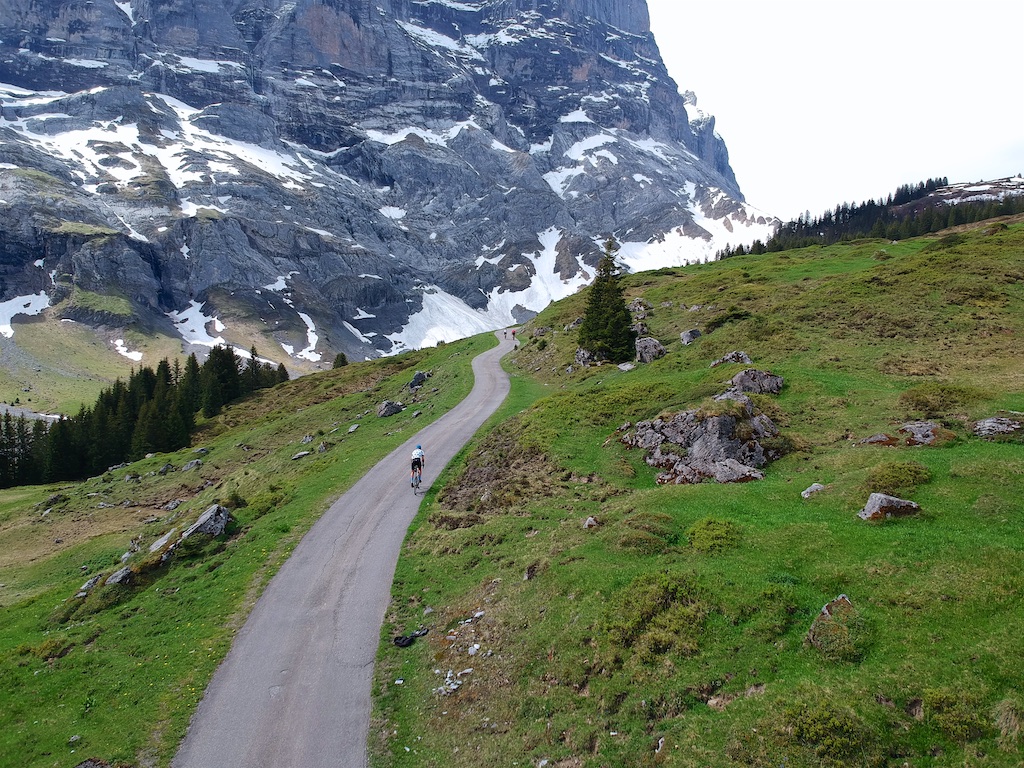 I think most of the better photos (like the very top photo) were taken with my portable camera. 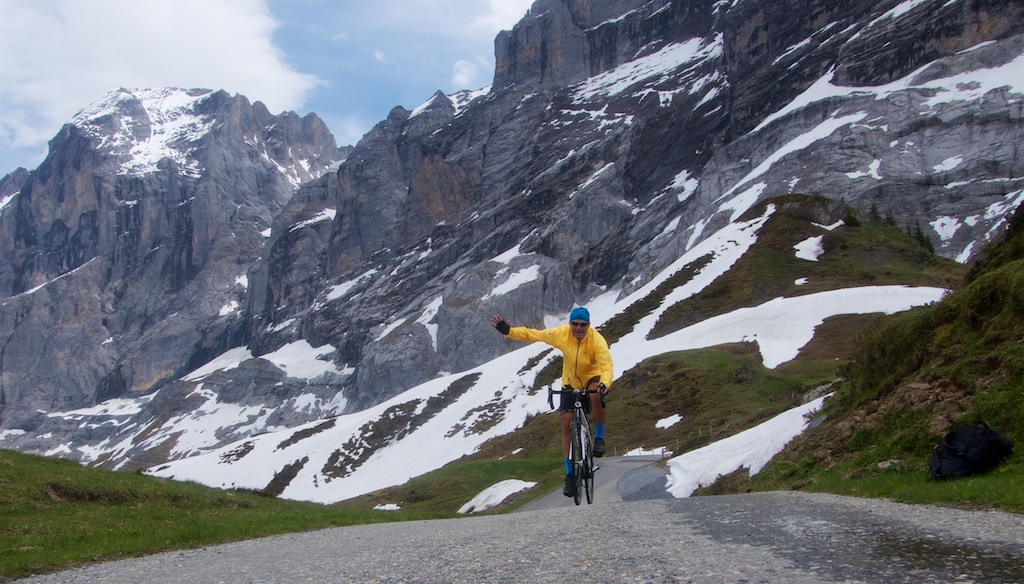 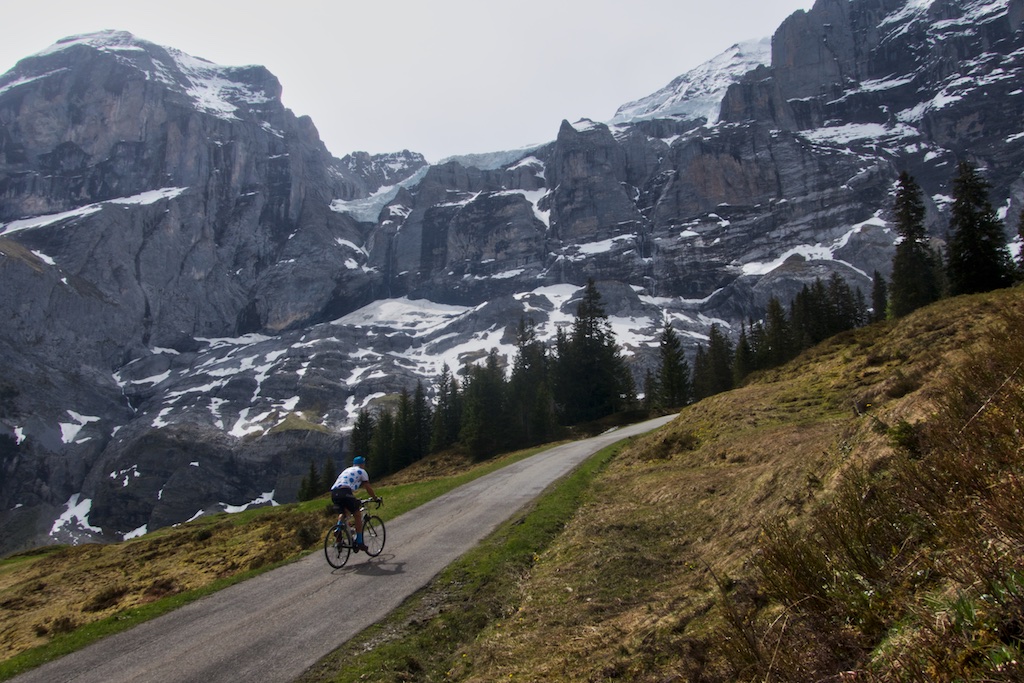 At the summit, as usual, were quite a few cyclists, and a few hikers – all enjoy the views.

There is a road exactly at the summit that leads higher and soon becomes unpaved. See this link for a truly magical mountain bike loop up to the Bachalpsee from here.

I didn’t descend all the way to Grindelwald as I was a little tired after a few recent big rides. But I still enjoyed this stretch with the Eiger North Face nearby dominating the views. 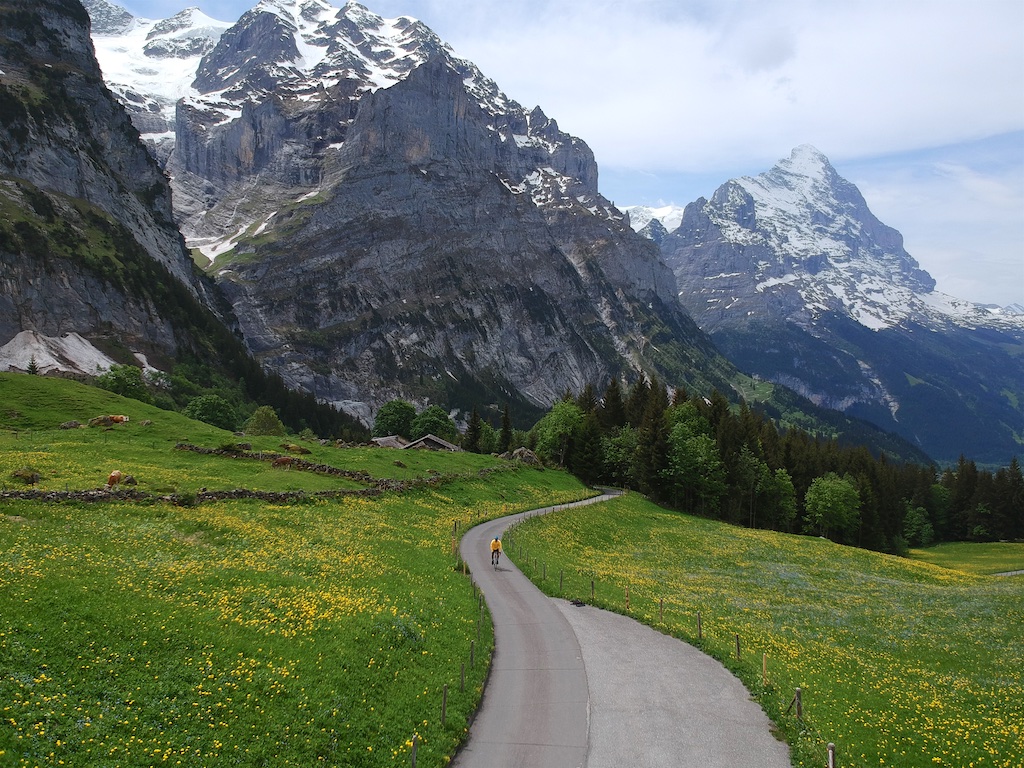 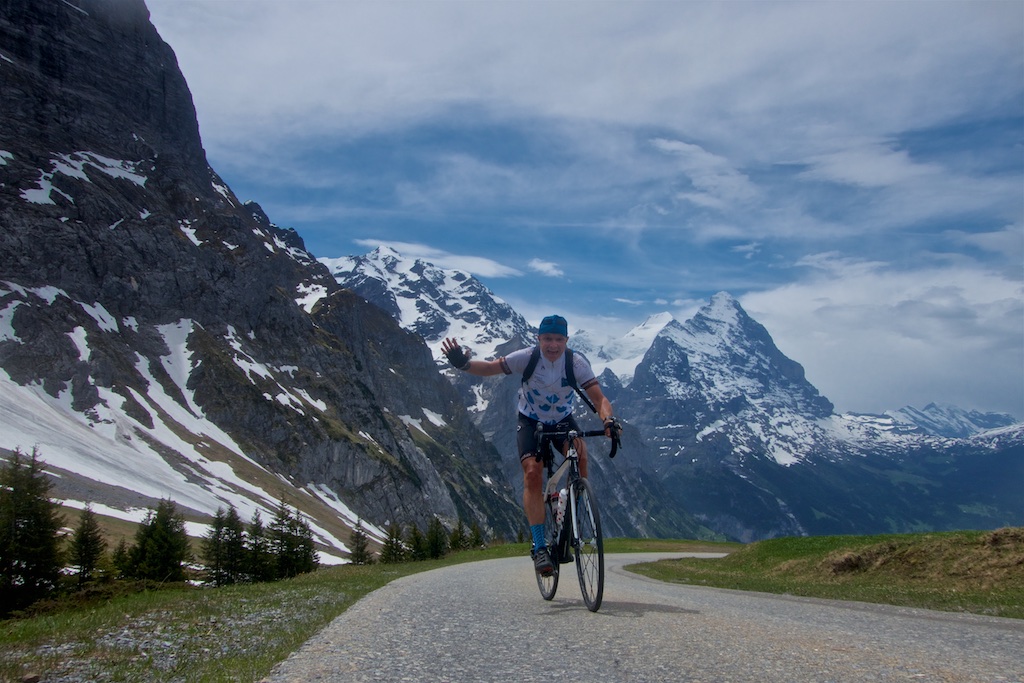 Eiger at right in both photos 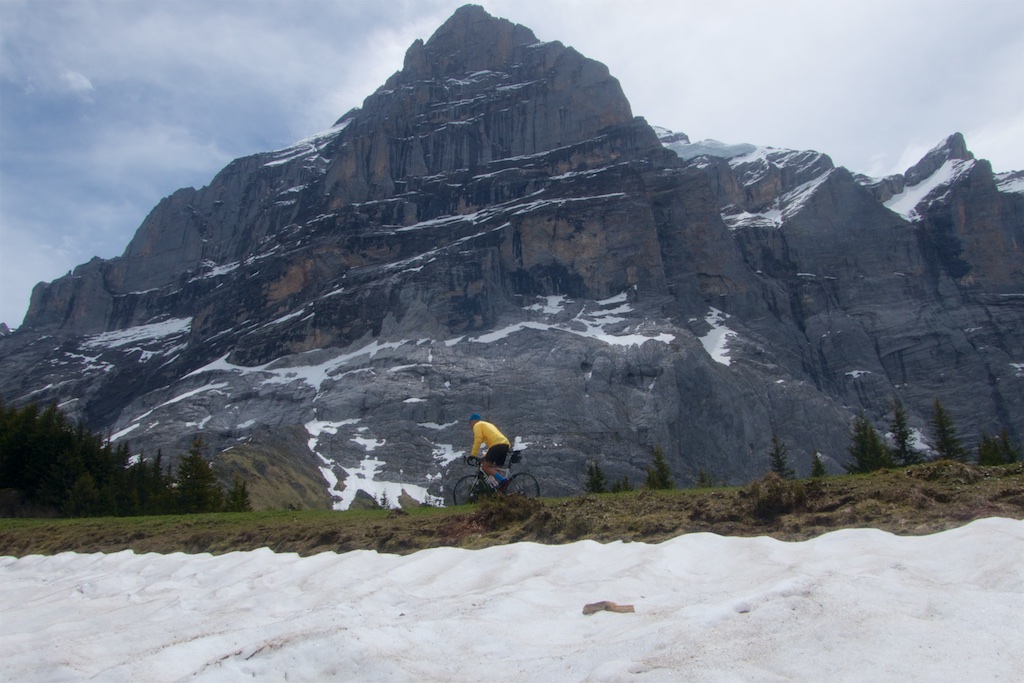 As I summited for the second time, I took one last drone photo: 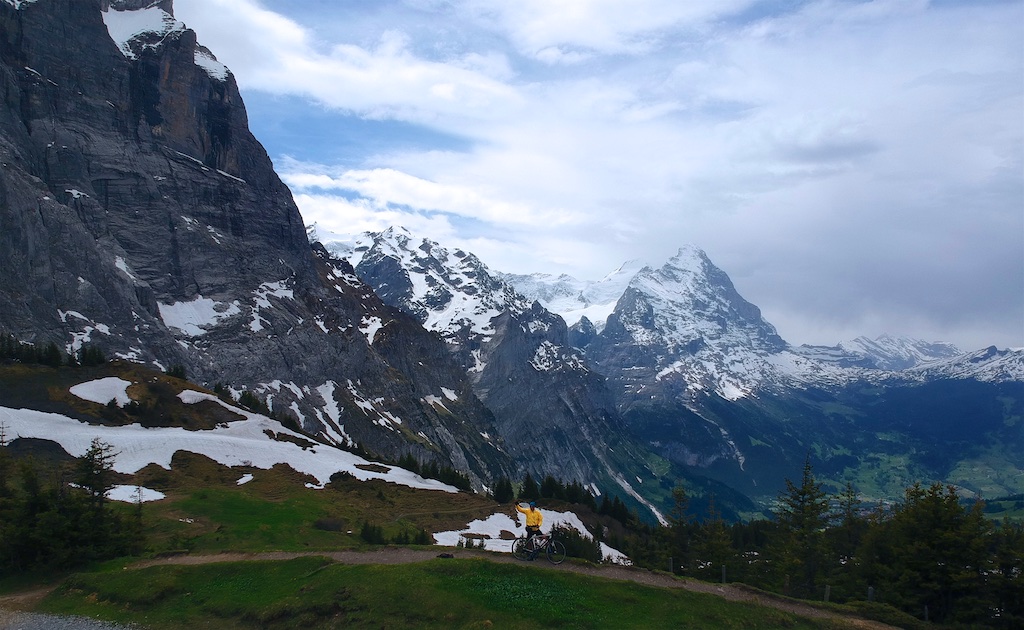 It’s easy enough to make a big loop. Descend to Grindelwald, continue to Interlaken, ride beside the lake and head back to Meiringen. But I like climbing both sides of this special climb.