This summer I cycled Colle del Nivolet and said: “This may be the most beautiful high Alps paved climb I have ever cycled. Seriously.” Now, cycling the fabulous climb to Lago di Naret, I was reminded of Nivolet:

Colle del Nivolet is higher and probably a little more spectacular, but it only gets “fun” for the final 15 kms or so. Whereas Lago del Narèt feels more remote and, importantly, the entire 32 kms is superb …. although the top half is easily the highlight.

I started in the village of Bignasco. Most of the early kilometres are fairly easy as the road climbs through a narrow valley with mountains on each side. It is so low that it feels lush. After 10 kilometres, at Peccia, there is a fabulous series of 12 hairpins and the road gets steep, stepping up into another plateau. Tough to photograph due to all the trees, but fun to ride:

About half way to the summit is Fusio, the last village. From this point, the route is ultra quiet. Above Fusio, the road climbs to a large diga (Italian for dam) and the Lago del Sambuco.

I stopped atop the dam to buy a drink, and the sales guy told me that the route to the summit had not opened – due to snow – until July 3rd this year.


The road continues for three flat kilometres beside this large lake. It is an absolute blast to ride this stretch.

If the climb had ended here at Lago del Sambuco, it would have been a very good ride. But it was about to get far more exciting. After Lago del Sambuco, the rest of the route is difficult. While the profile shows a bunch of full kilometres at 10%, 11%, 12%, etc – there are some short stretches much, much steeper – hard work, but in a beautiful setting.

After a short descent at 26 kilometres, the road turns up for real. I was working hard, approaching the tree line when a herd of goats came galloping down the mountain. There was one giant king goat that eyed me, and yes, I was slightly nervous. 🙂 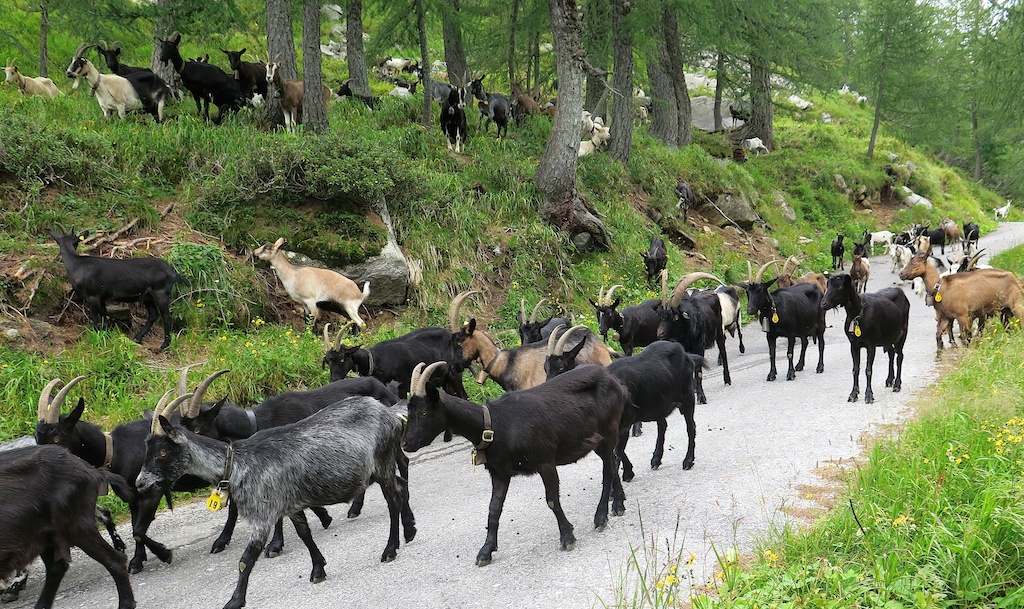 And the road climbs higher:

At Lago Scuro, there is a small descent and then a final ramp beside the big Diga del Narèt.

There are in fact two dams for Lago del Narèt. They are paved and I cycled across both. There is also an unpaved road around the left side of the lake which I followed to the far side. Here is a hiking trailhead. Perhaps a future mountain bike project?

As I began descending, I thought that whoever had decided to build a road here was either insane or a genius (that enjoyed cycling). A truly amazing climb.

A paved road to the end of the world. A truly great climb.