At a minimum Le Pla d’Adet is fun to say. The ski station – now marketed under the name Saint-Lary 1700 – has hosted the Tour de France nine times, last appearing in 2005 in a stage won by the American George Hincapie.

The climb up to Pla d’Adet is fully paved, . The road to Co de Portet was paved in 2018 for the Tour de France. However, over the top is still unpaved.

It’s one of those rare climbs that you can see almost the entire route from down below – it’s hard not to be impressed at the view of the first stretch:

There is a plaque at the start of the climb commemorating its first appearance in 1974 won by the popular Frenchman Raymond Poulidor: 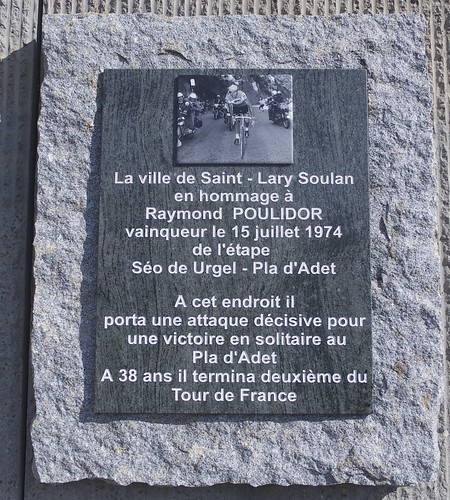 There are very few hairpins and several very steep stretches, making this short climb quite difficult. It’s an ugly purpose built station at the top and I didn’t stay long. Descending just a couple of kilometres is a turn off to a much more fun extension: The route to Col de Portet.

Unfortunately, it’s primarily a gravel road – although it switches to paved several times.

It’s a big climb heading towards bigger mountains. The early stretch hairpins up through a cow pasture:

Finally finishing on the upper ski pistes of the ski station:

My plan was to descend into the mountains on the other side and hopefully find the barrage and lac de d’Oule. Basically the fifth big lake in addition to the four I passed during the exceptional Lac de Cap de Long ride the day before.

After a couple of kms it became a VERY steep, rugged downhill road but I found the lake and despite a little walking it was beautiful and remote: 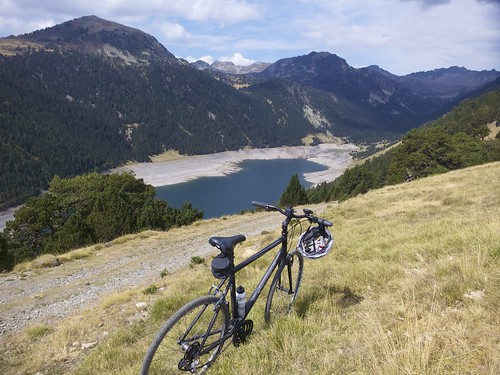 I had a quick lunch at a refuge and then crossed the dam, descended a very steep and rough path, finally rejoining the Route des Lacs route descending to Fabian then back to Saint-Lary. 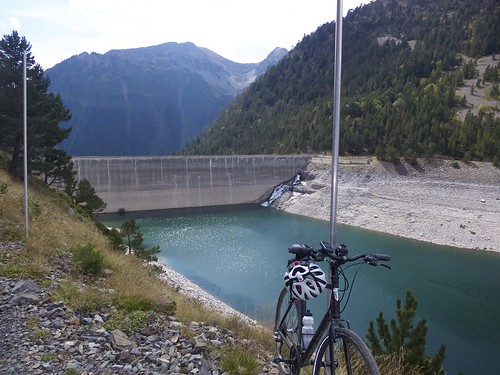 I was tired after several big days and I took this pretty slowly, and Le Pla d’Adet isn’t going to be at the top of any of my favourite climb lists — but the climb to Portet is a proper and scenic Hors Categorie challenge and the adventure to find and descend to the dam makes this a very worthwhile loop.

In case you are looking closely at the map, you’ll see that I was briefly and nearly hopelessly lost near Pla d’Adet wandering up ski slopes looking for the road to Col de Portet …. which is actually hard to miss a couple of kms lower. Oops.

It's one of those rare climbs that you can see almost the entire route from down below - it's hard not to be impressed at the view of the first stretch. But the fun part is with a mountain bike, going higher to Col de Portet.