Thanks to Pierre who suggested this route in a comment a few weeks back. Merci!

The route includes 3 Cols but the detour up Mont d’Or and it’s leg crushing final kilometre is the highlight of this loop through the French and Swiss Jura mountains.

Starting from Vallorbe, the least interesting part of the ride is the first few kms into France and up to Col de Jougne – the road is a little busy. There was no Col sign but an interesting panel saying that this was the split between water heading to the Mediterranean versus the North sea. Europe’s continental divide?

Next was the short but brutal climb to Mont d’Or. There are three primary routes up all starting near Longvilles-Mont d’Or. I took the shortest (thus the steepest), but all three require surviving the last kilometre that averages 15%.

A few hundred metres into this last kilometre I felt great ….. but it goes on for a long, long way. 300 metres from the finish, It took all I had to keep pedaling and I had to navigate through a herd of curious cows. At the top, a short hike will take you to a lookout at 1460 metres (but I had the wrong shoes).

The descent is so steep that it hurt my neck trying to look forward. 😉

After descending, The next 13 kilometres was flat but into a strong headwind. The blue sky was being rapidly replaced with dark clouds. Uh oh.

At Mouthe begins an easy but nice 9 kilometre climb through the woods up to Col de Landoz Neuve. As a light rain started, I quickly descended back into Switzerland past Lac de Joux, a tiny uphill over the Col de Mont d’Orzeires, and back into Vallorbe.

Between hyper-ventilating up Mont d’Or, and racing the rain clouds ….. no good photos – but a nice ride. 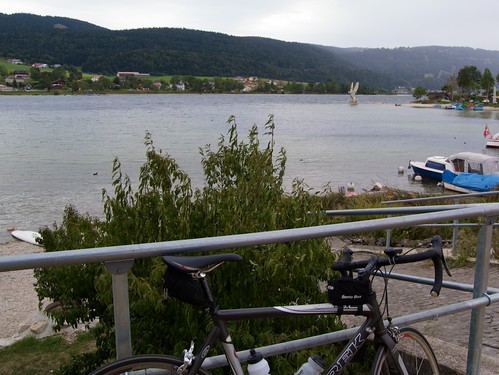