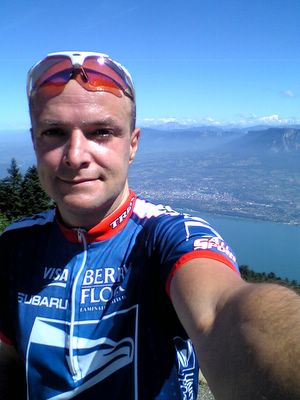 Think of that really short steep stretch on your local ride that you hate because it’s just a bit too hard. Now imagine it’s 13 kms long.

I have had my eye on Mont du Chat for a couple of years. But partly due to fear, and partly because it is not a famous Tour de France climb (it appeared only once in 1974 when Poulidor dropped 5x champion Merckx going up only to be caught on the descent), I have avoided it. But it was recently included by a French magazine on its list of the best climbs in France. Thus it was time to try.

Quote (loosely translated): “At the South-West of Lake Bourget Mont du Chat (Cat Mountain) is one of the most redoubtable climbs in France with terrifying steepness …”

It is hard! Averaging just under 10% for 13 kms with one stretch of 300 metres at 13%. Probably the hardest I have climbed this year. But it is a fantastic ride. It starts very low (250 metres) beside beautiful Lac (lake) du Bourget and finishes at about 1,500 metres. Because it starts so low, unlike most big climbs, it is forested the whole ride. (many big alp climbs get well above the tree-line). The road has hardly any traffic as there is nothing up top except a TV/communication tower and a great view of the Lake and the Alps.

Plummeting down the other side, I wasn’t certain of my route back – although I was trying to follow a sign posted bike trail. The other side is nothing but immaculate little quiet french villages – great riding. I soon realized that returning would require some more climbing over the – much easier and much lower – Col de Chat. I had three water bottles and they were all empty as it was hot work. But after the Col it was all downhill to the lake and car. Great ride.